BIRMINGHAM — The blame game for Republicans’ weak showing in last week’s Michigan elections intensified Tuesday, with a top party official saying former President Donald Trump scared away donors and hurt candidates up and down the ballot.

During a panel discussion reflecting on the 2022 midterms hosted by the Detroit Regional Chamber at the Townsend Hotel, Michigan Republican Party chief of staff Paul Cordes said many donors “did not feel like donating to the party or candidates because of Donald Trump.”

Republican gubernatorial candidate Tudor Dixon’s lack of funding and campaign infrastructure immediately following her August primary victory left the GOP without “the tools to fight back” as Democrats spent millions defining Dixon and other candidates on their opposition to abortion and other issues, he said.

“We turned out a lot of Republicans, but the top of the ticket was a drag on everything,” Cordes said, adding that he believed Republicans had a chance at keeping the Legislature or winning additional congressional seats had Dixon performed better.

Candidates including Tom Barrett, who narrowly lost to incumbent Democratic Rep. Elissa Slotkin in the 7th Congressional District in mid-Michigan, were victims "of the top of the ticket woes," he said.

Dixon lost to incumbent Democratic Gov. Gretchen Whitmer by 11 points in last week's election, while Republicans lost all three statewide races, both chambers of the Legislature and two competitive congressional seats. It was the party’s worst showing in a generation in Michigan.

Whitmer raised more than five times than Dixon, $36.4 million through Oct. 23 and spent nearly $13 million on ads in the last two months. Dixon didn’t air a television ad until late in the campaign.

Whitmer also appears to have benefited from strong turnout in support of Proposal 3 to enshrine abortion rights into the state constitution. Voters approved the measure 57 percent to 43 percent, after both sides pumped more than $57 million into the campaign.

Cordes’ comments came one day after Trump announced he is running for president again in 2024. Speaking to the chamber, Cordes doubled down on a memo to party leaders shortly after the election that blamed Dixon’s candidacy for the losses, as well as a “power struggle” within the party among factions loyal to and opposed to Trump.

Cordes said the intent of the memo wasn’t to criticize Dixon but outline what went wrong.

“After getting flipped out of office at pretty much every level of government, we felt that we owed it to the people who we worked for to do kind of a quick debrief on where we thought things were,” he said.

Dixon slammed the memo, writing on Twitter it is a “perfect example of what is wrong with the” party. She said Cordes and party co-chairs Ron Weiser and Meshawn Maddock “all refuse to take ownership for their own failures.”

Weiser is not running for re-election, and Dixon has said she’s considering a candidacy. Matthew DePerno, who lost his GOP bid for attorney general, has declared his candidacy.

"Inflation was thrown out as a specter…it's not like we were seeing Republicans with a plan to really tackle that and say what they were going to do," she said.

Stitt also noted candidates who opposed abortion rights and questioned the results of the 2020 election performed worse than their opponents throughout the country.  Dixon, DePerno and GOP Secretary of State candidate Kristina Karamo all have

Cordes acknowledged that Democrats' early advertising on the issue highlighting Dixon's comment on journalist Charlie LeDuff's podcast referencing a "perfect example" after he questioned whether she would oppose abortion in the case of a teenager who was raped defined the narrative for two months.

The quote was taken out of context and referred to Dixon’s belief that Proposal 3 would make it harder to catch abusers.

But the damage was done.

Republicans like Dixon opposed to abortion with no exceptions beyond saving the life of a mother were going to struggle after the U.S. Supreme Court overturned Roe v. Wade this summer, Stitt said.

"No matter what, whoever the Republican was, I believe we would have been able to really define them on that issue," she said. "’Perfect example’ was, of course, the perfect example." 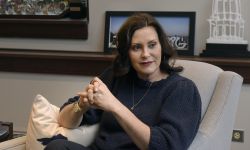 Whitmer says she won't run for president: ‘I'm grateful to be right here’