DEARBORN — With just over a week before the Nov. 8 election, gubernatorial hopeful Tudor Dixon and other Michigan Republicans rallied around their parental rights message Sunday in a community where the issue is a flash point.

Dearborn Public Schools parents and community members have been showing up by the hundreds to school board meetings, protesting against children's access to books with LGBTQ themes and sexual content.

“We've got some pretty sketchy books in schools, and (Whitmer has) made it clear that she thinks it's funny to make a mockery of this, that these parents’ concerns don't matter,” Dixon said to a few hundred people at the rally.

Dixon has made education and school safety a touchstone of her campaign, particularly parents’ rights and books she says sexualize children. She recently said she would support a statewide ban on “pornographic” books in schools and called on state Superintendent Michael Rice to resign over teacher training videos on LGBTQ issues.

She mocked Whitmer’s claim that Michigan schools only closed for three months during the pandemic, as well as the governor’s criticism of Dixon’s proposal for more armed security at schools.

“Out of the two of us, the only person that was governor when we had a school shooting in Michigan was Gretchen Whitmer. And I haven't seen her do anything about it,” Dixon quipped, referring to the killing of four students last year at Oxford High School by a classmate. 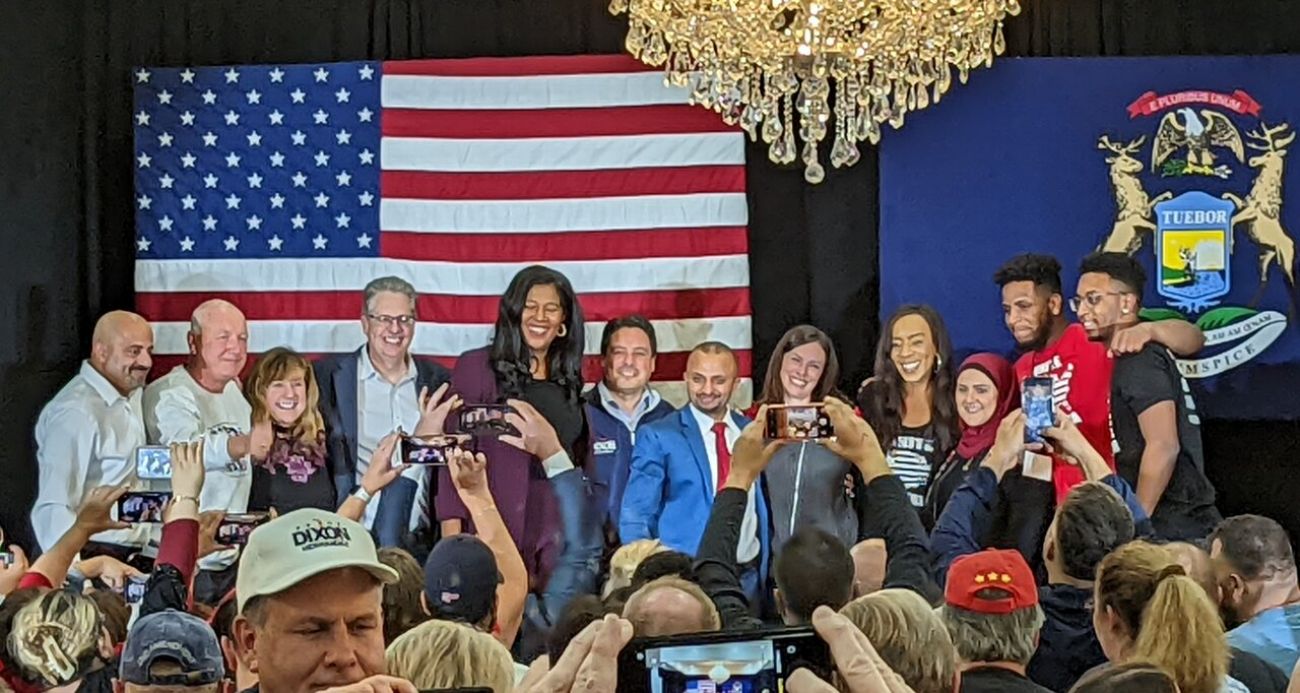 Dixon has said Michigan needs to “harden” schools, which she said are “soft targets” for shooters. Whitmer has backed gun reforms including mandatory safe storage bills that remain longshots in the GOP-led Legislature.

A state task force formed after the Oxford shooting recommended more money for school-based mental health centers and improved threat assessments, but the measures have not moved in legislative committees. Michigan's budget for next year, though, does include $168 million for school security.

Dixon appeared at Sunday’s rally with former U.S. Rep. Tulsi Gabbard, who ran for president as a Democrat in 2020 and is now an independent, and fellow members of the Republican ticket, attorney general candidate Matthew DePerno and secretary of state hopeful Kristina Karamo.

Polls show Dixon is neck-and-neck with Whitmer after once trailing by double digits. So this weekend, Dixon brought Gabbard on a seven-stop tour of metro Detroit in hopes of luring swing voters to her side.

Democrats “are so out of touch with the needs of families and people across this country,” Gabbard said, encouraging people to look past party labels and focus on what would be best for their kids’ futures.

“My concern is if we do not act we will get to a point where it has gotten so bad that we cannot come back,” Gabbard said, telling attendees that Dixon “is fighting for every single one of you” and is committed to working hard for Michigan families.

Dearborn resident Naji Almudhegi said he voted for Democrats in the last election, but his recent experience with protesting what he called “smut” in local schools prompted him to support Dixon and other Republicans.

"In recent years, the Democratic Party has moved further and further from our values at warp speed," he said. "When they targeted our children with sexually explicit books, we said, 'Hell no.'"

The Gabbard stops this weekend came as Michigan Democrats rallied in Detroit with former President Barack Obama. Obama told a crowd of 3,500 on Saturday that Whitmer is "focused on the fundamentals: Good jobs, lower costs, better schools and fixing the damn roads," while Republicans are only focused on “owning the libs” or “getting Donald Trump’s approval."

Speaking Sunday, DePerno slammed Attorney General Dana Nessel, a Democrat, for an off-the-cuff-remark she made this year about wanting a drag queen in every school and told the crowd to expect more of the same if Democrats win in November.

DePerno encouraged rally attendees that Republican victories in Michigan were possible, telling the crowd, “the mama bears across this state have finally had enough.”

“We have a chance to change this,” he said. “I will ensure that you have a fundamental, ultimate say in your child's education.”