Welcome to Michigan, President Trump. About that economy you promised …

Michigan Government
Welcome to Michigan, President Trump. About that economy you promised …

BATTLE CREEK — Just hours after he is set to become the third president in American history to be impeached, President Donald Trump will step off a plane in a city far more amenable to him than Washington.

Trump is hosting a rally Wednesday night in Battle Creek in Calhoun County, one of of 12 Michigan counties whose residents who voted twice for former President Barack Obama and instead favored Trump in 2016, propelling him to a narrow victory in the state.

Voters in swing counties like Calhoun were motivated in part by economic anxiety, top of mind in manufacturing hubs that are vulnerable to outsourcing or automation. Trump pledged to strengthen the economy and bring those jobs back.

Three years later, Calhoun County has not experienced the big gains Trump promised in 2016. Jobs have decreased, as have wages when adjusted for inflation. Manufacturing — which comprises more than 20 percent of all jobs in the county — continues to be particularly hard hit. Those jobs are down 6 percent and total manufacturing wages declined nearly 18 percent.

That trend is writ large in the other 11 counties that Trump pried away from Democrats and in the Midwest as a whole, where data indicate that counties that favored Trump are being left behind.

And in Battle Creek, a manufacturing town in southwest Michigan known as the home of Kellogg’s cereal, many residents told Bridge they’re bullish on the economy – even though numbers say the county is lagging behind the state.

Trump’s handling of the economy, in particular, has impressed Tony Johnson, 51, who helps design graphics for commercial packaging and voted for Democrat Hillary Clinton in 2016.

Like others in the county that favored Trump 53.5 percent to 41 percent that year, Johnson said he’s keeping his options open before the November 2020 election.

“I think he’s been a great president policy-wise, but he continues to be a loudmouth that brings on just as much as [Democrats] dish out,” said Johnson.

“I’m going to wait and see who the Democratic person is, but if it ends up being someone who’s very socialist, very progressive type, I would probably vote for Trump and not tell my wife,” he said, laughing with Trump-supporting friends as they wrapped up lunch this week.

While the American economy soars, growth in Michigan and other coveted swing states such as Ohio and Wisconsin is slower than the nation, while manufacturing continues to decline, according to reporting by the New York Times.

A Bridge analysis of U.S. Bureau of Labor Statistics data shows the decline is even more precipitous in Michigan’s 12 counties that swung in favor of the GOP in 2016. Those counties are Gogebic, Manistee, Lake, Isabella, Bay, Saginaw, Shiawassee, Macomb, Eaton, Calhoun, Monroe and Van Buren.

When adjusted for inflation, wages in five of the 12 counties have declined since 2016 and more than half have wage growth below the statewide average. All but one (Eaton County) has lost jobs, and all but Macomb lag behind Michigan’s job growth of 2.2 percent.

While the 12 counties that swung for Trump have largely fallen behind Michigan’s growth, Michigan in turn lags behind the nation.

In Michigan, jobs have grown half as quickly as they have nationwide since 2016, while workers make less money than their counterparts in other states. Wages statewide are largely flat statewide when adjusted for inflation, while they’ve grown by more than 4 percent nationwide.

The numbers don’t discourage many residents who may remember when countywide unemployment hit 11.5 percent during the depths of the Great Recession in 2009.

“My 401(k), the front numbers have changed twice positively since President Trump took over. That didn’t happen for eight years,” said Steve Frisbie, a Republican and chair of the Calhoun County Board of Commissioners.

The local economy is booming, he said.

“There’s plenty of jobs available — we have more jobs open than we have people to have in them.”

No doubt, Calhoun County’s unemployment has fallen a full point to 3.5 percent from 2016. But average annual county wages have fallen slightly to $52,832, compared to the national average of nearly $60,000. And some of the biggest losses have been to factory jobs, which at an average of $59,000 are among the county’s best-paying.

Add in inflation, and Calhoun County’s wages look even worse.

“We make good money, don’t get me wrong, but our pay increases do not reflect what’s happening elsewhere,” said Jackie Braman, a 58-year-old secretary at Kellogg Community College who supported Democrat Hillary Clinton in 2016.

“They’re lower than everyone else.”

Other analysts contend voters will see the national gains made under Trump and determine he’s the best candidate to help their communities grow.

But Trump is “kind of an asshole” and won’t get his support in 2020, said Abbott, who voted for former President Barack Obama in 2012 before sitting out 2016 because he didn’t like Trump or Democratic nominee Hillary Clinton.

Voters like Abbott, whose apathy toward both presidential candidates kept him home on Election Day, appeared to play a significant role in Michigan’s presidential election three years ago.

More than 75,000 voters who voted in the 2016 general election chose not to cast a vote in the presidential race and focus solely on down-ballot candidates. That number is up 52 percent from 2012 and twice as many as 2008. Trump won the state by 10,704 votes, a 0.23 percentage margin that was the narrowest in Michigan history.

Abbott said he hopes a moderate emerges from the Democratic primary next year but remains disillusioned by politics.

The impeachment process led by House Democrats “is “silly and a waste of time” because Senate Republicans won’t convict the president, Abbott said.

Beth Kelly, chairwoman of the Calhoun County Democratic Party, told Bridge that in 2016, “a lot of people put their trust in and voted for a president who made a lot of promises that they'd be doing better under his leadership. People in our area just aren’t seeing that.”

She and other local Democrats have learned their lesson from 2016; they don’t plan to let voter turnout hurt them again. Last time, “it was almost like (Democrats) thought we had it in the bag,” she said.

In 2018, voters in Calhoun County chose former Attorney General Bill Schuette for governor by only 2.5 percent and John James for the US Senate over Sen. Debbie Stabenow by 6.5 percent, indicating Republicans recently have an edge in the area, but it's still fairly moderate.

Local Democrats plan to remind voters of the economic realities of Trump’s policies and not assume any vote is safe. Kelly said it’s a matter of “making sure we're not leaving anyone behind.”

While Trump's visit to Michigan will be flavored by the pending impeachment vote, the president will be able to trumpet positive news on trade, including a "phase one" deal with China to de-escalate a tariff war that has hurt farmers; and pending ratification of the new United States-Mexico-Canada Agreement, a long-promised NAFTA replacement that House Democrats appear poised to approve later in the week. 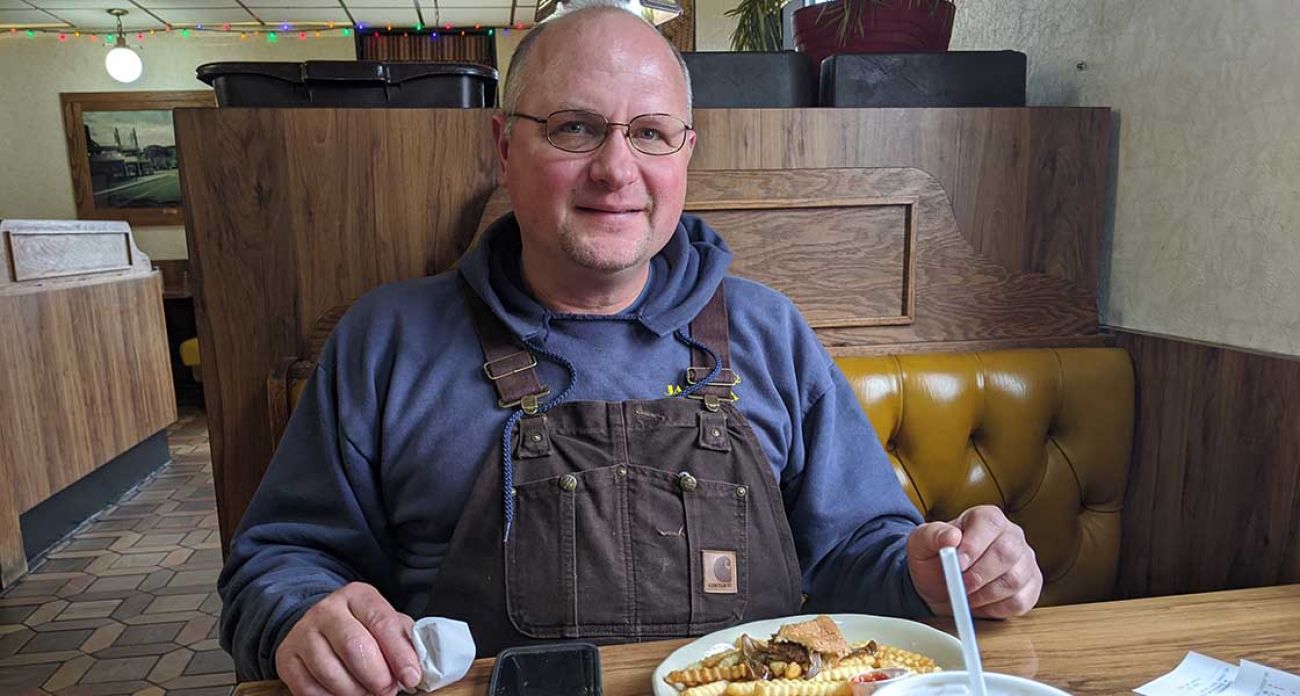 “I think those who voted for (Trump) in 2016 are most likely going to vote for him again,” said Frisbie of the Calhoun County Board of Commissioners. “And those who were on the fence last time are going to look at their personal financial situation, their security, and go ‘I'm better off today than I was four years ago,’ and vote for Donald Trump.”

GOP strategist Dennis Lennox told Bridge “there’s no question” that Trump’s strategy relies on counties like Calhoun, Bay and Saginaw County, swing counties that the administration is targeting in campaign stops this week.

Suburban regions like Oakland County are “out of reach for Republicans now,” but Trump showed the GOP can still win statewide elections by carrying Macomb County and other “blue collar” areas while “running up the score” in west Michigan and up north, Lennox said.

In what Lennox called a “brilliant move,” Vice President Mike Pence will hold a separate campaign rally in Saginaw earlier Wednesday before joining Trump in Battle Creek. Lara Trump was set to campaign in Sterling Heights on Tuesday evening, adding a Macomb County stop to the statewide blitz.

All three regions have been hit hard by manufacturing job losses under NAFTA, making this week’s visit a prime opportunity for Trump to tout the USMCA, he said. Trump railed against previous international trade deals as part of his winning 2016 campaign.

Trump is “doing an awesome job,” said Dave Peters, a 60-year-old tile setter at The Milton building site who votes Republican despite the risk of union backlash. “He’s straightening out the country, and he seems to be doing a better job than the last four or five (presidents).”

The city has become a “factory town," said Thomas, who works in landscaping property management and also fixes homes to flip.

“There’s a lot of people working right now and hiring. Whether you have a college degree or not, you can get a job. But we still have people on the corner holding up signs.”

Thomas said he leans right politically but often splits his ticket to vote for candidates from both parties. He voted for Trump in 2016 but has supported Democrats in the past, including former President Bill Clinton. He’s waiting to see who the Democratic nominee is for 2020 but gives Trump good marks so far.

“It seems like under the Obama administration, everybody kept their cash in the bank and didn’t spend it,” Thomas said of local small business owners like himself. “They weren’t buying new trucks and equipment. And now, with Trump in office, the economy — and my stocks — are doing good.”