Michigan has deep ties to the militia movement, but experts say the Wolverine Watchmen group linked to plots to kidnap Gov. Gretchen Whitmer, target police and storm the state Capitol appears to be part of the  increasingly extreme Boogaloo movement preparing for civil war.

Alleged Wolverine Watchmen ringleaders charged Thursday under state antiterrorism laws identify as “Boogaloo Bois” and were preparing for “a violent uprising against the government or impending politically-motivated civil war,” according to police affidavits. Joseph Morrison, a founding member of the group, went by the name Boogaloo Bunyan online.

Morrison and Pete Musico, who investigators say founded the Watchmen and hosted training exercises at their shared home in Munith in Jackson County, allegedly began recruiting members through Facebook as early as November 2019, but then used private and encrypted channels to communicate and set up paramilitary training operations.

The Wolverine Watchmen appears to have grown this year "specifically in response to the [coronavirus] pandemic and… Whitmer's state lockdown,” said Amy Cooter, a sociology professor at Vanderbilt University in Tennessee who has spent years studying militias, particularly in Michigan.

“I don’t think the charges are all that shocking, given our political moment and given how Michigan has always been a hotbed of militia activity.” 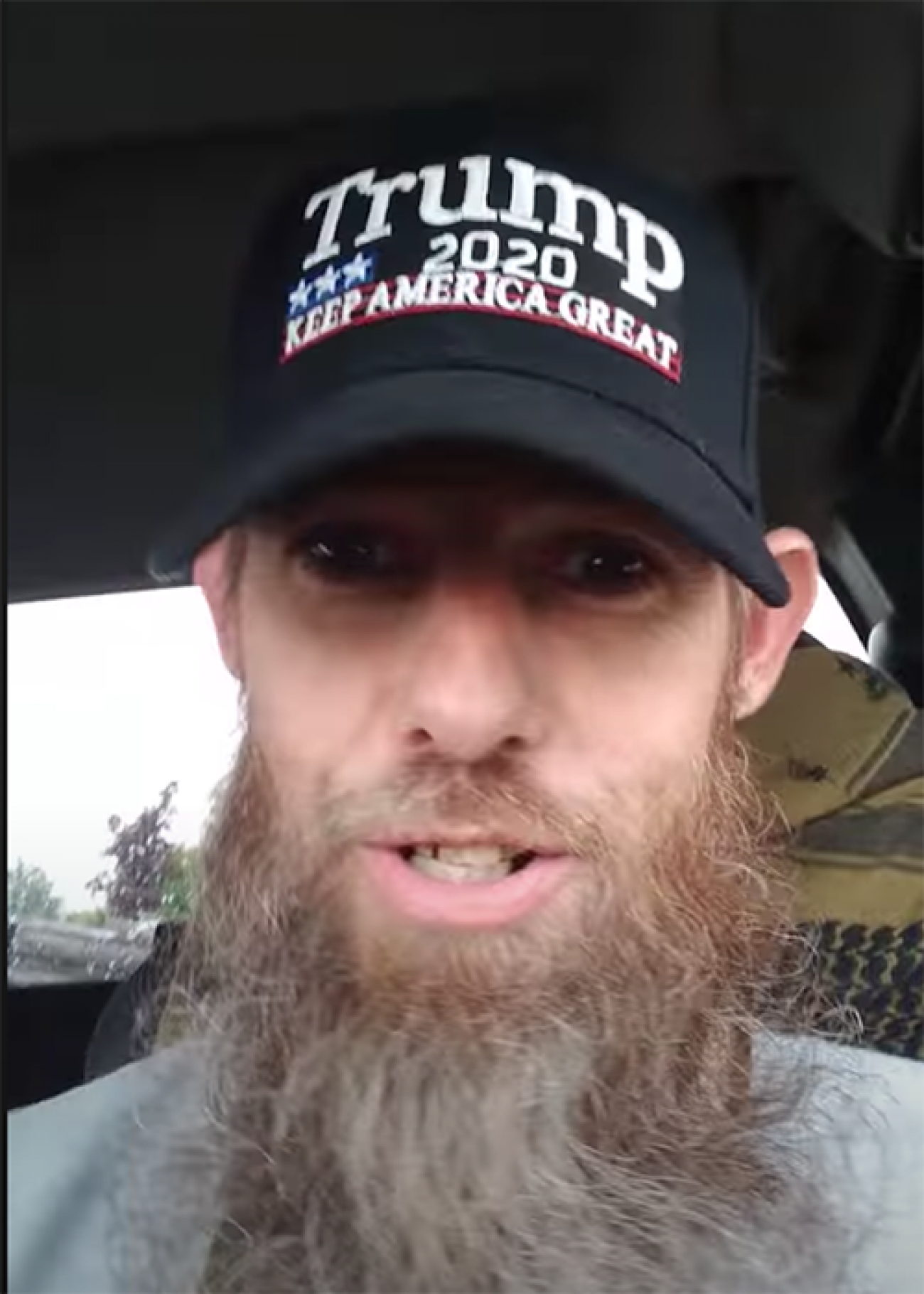 Of the 13 men charged by state and federal officials, it’s not immediately clear how many of them were members of the group. An FBI affidavit detailing the alleged plot against Whitmer does not name the Wolverine Watchmen, but describes plotters meeting with members of “a militia group,” including for “tactical training exercises” in Munith.

Michigan Attorney Dana Nessel alleges that Morrison, Musico and five other Wolverine Watchmen attempted to identify home addresses for potential attacks against police officers, sought to instigate a “civil war” and plotted to storm the state Capitol and take hostages, including Whitmer.

At least two suspects, William and Michael Null, had previously identified themselves as members of a separate group, the Barry County-based Michigan Liberty Militia.

Its Facebook page was pulled down Thursday, and self-described co-founder Phil Robinson did not respond to messages seeking comment.

The Southern Poverty Law Center identified the Michigan Liberty Militia as one of 14 "extreme antigovernment groups" that were active in Michigan as of 2019.

Shelly Gregoire, a member of the Home Guard militia who recently ran for state House as a Republican in Battle Creek, called the Wolverine Watchmen a fringe group that “nobody’s ever heard of.”

“That’s not us,” she said. “This is some outside group. We don’t know what they were plotting. This is all news to us, because our intention is not to overthrow the government at all.”

Gregoire said her militia, which is spread out over Michigan, is "nonviolent" and that its members are "not these radicalist right-wing extremists that everyone says we are."

Michigan is “the birthplace of the modern militia,” said Daryl Johnson, a former counterterrorism analyst for the U.S. Department of Homeland Security who now consults law enforcement agencies on domestic terrorism.

But militia groups in Michigan and elsewhere began to thin after the 1995 Oklahoma City bombing that killed 168 people and was partially plotted on a farm in Michigan’s Thumb.

Groups like the Boogaloo and the Watchmen are part of a new wave of militia activity that emerged in response to the election of Barack Obama and the economic downturn of the early 2000s. The groups are largely right-wing, but leftist groups including the John Brown Gun Club, the Not F***ing Around Coalition and Redneck Revolt have begun to emerge.

“Most militias are defensive in nature,” Johnson said. “They tend to want to prepare for the worst-case scenario and then act whenever that event happens, whereas groups like the Watchmen are a little more into the planning and the offensive aspects, such as practicing police ambushes.”

Nesselt told MSNBC the Wolverine Watchmen “traffic in the politics of extremist … some of them oddly do have pro-Trump stances, but many of them are just antigovernment all together, no matter who's in the government.”

Johnson said there are hundreds of militia groups in the country with tens of thousands of members, but establishing concrete statistics is difficult. The upper Midwest, including Michigan, Ohio and Indiana, remains a hotbed of activity, he said.

The common themes include an “ultra-nationalistic” point of view, antigovernment beliefs, Islamaphobia, passion for Second Amendment gun rights and “a willingness to take up arms,” Johnson said.

He said recent civil unrest over police brutality and racism, political vitriol over the handling of the COVID-19 pandemic, and concerns about the upcoming presidential election have led to “a period of high risk,” with greater risk of violent activity from self-styled militias.

At least four of the men charged Thursday had attended anti-Whitmer or pro-militia rallies this year at the Michigan Capitol, including the Null brothers, identical twins who were photographed carrying long guns in the Senate gallery on April 30.

Null had previously called himself a co-founder of the Michigan Liberty Militia, which has "had some squabbles with other militia groups" but has generally painted itself as "more mainstream than the Wolverines," said Cooter, the Vanderbilt professor.

It’s not immediately clear if the Nulls splintered off to join the Watchmen or also remained active in the Michigan Liberty Militia.

“Facebook and a few other places have shut down their forums, so it's a whole lot harder to track them now," Cooter said.

Facebook in June removed hundreds of Boogaloo accounts and groups, including one for the Wolverine Watchmen, according to the Washington Post, telling the newspaper it "proactively reached out and cooperated with the FBI early" in the Michigan investigation.

Musico, identified by state police as a founding member of the Wolverine Watchmen, appeared to largely suspend his social media activity in 2019 but had maintained several active accounts.

Musico also appeared to maintain a profile on Gab, a far-right social media site, under the handle Patriotpete77. He had not posted since 2018 but that year suggested U.S. Rep. Debbie Dingell, D-Dearborn, "needs to be hung for treason or at least arrested for treason."

In another post, Musico alleged that “they are killing white people” in South Africa, echoing what the Anti-Defamation League has labeled as a longstanding and false claim circulated by white supremacists.

Barry Croft of Delaware, the lone out-of-state resident facing federal charges in the Whitmer kidnapping plot, reportedly praised Trump on Twitter and in a video espoused extremist views, telling followers "we’re at a place where if we don’t fight, we’re definitely gonna lose."

But Brandon Caserta, charged by the FBI in the main plot, reportedly called Trump a “tyrant” in a recently deleted social media video that circulated online Thursday.  In another, he wore a Hawaiian shirt, the uniform of the Boogaloo movement.

“Trump is not your friend, dude,” a man who appears to be Caserta says in one video. “Every single person that works for the government is your enemy.”

Tip of the iceberg?

Federal charging documents indicate plotters met and formed a dangerous alliance at an American Patriot militia rally at the Michigan Capitol on June 18.

Adam Fox, a suspected ringleader in the Whitmer kidnapping plot, allegedly met militia leader Ty Garbin there and told him “he planned to attack the Capitol and asked them to combine forces.” according to an FBI affidavit.

Gregoire, the Battle Creek militia leader, was at that rally, where the Michigan Liberty Militia “ran security,” she said.

The Null brothers, accused of helping surveil Whitmer’s vacation home with kidnapping plotters,  also appeared to be at the rally, according to photos from the Lansing State Journal.

Gregoire said she knew Fox from a previous encounter but did not see him at the rally.

“I met Adam once, a long time ago, and I didn’t like the guy then,” Gregoire said. He seemed a “little off”  and gave off “a weird vibe,” so Gregoire kept her distance, she said.

In television interviews Thursday and Friday, Nessel said the Michigan charges could be “the tip of the iceberg.”

“It’s not just a Michigan problem,” she said on MSNBC. “It’s an American problem, and I think there’s going to be more incidents to come.”

Evidence collected from suspects this week is “is still being reviewed,” Ryan Jarvi, a spokesman for the attorney general’s office, told Bridge on Friday. “So this matter is still ongoing.”