The abortion pill is really a series of two pills. Whether it will remain legal in Michigan is unclear if federal abortion protections are struck down. (Dale Young/Bridge Michigan)
May 6, 2022
Robin Erb (Email)
Michigan Health Watch
Michigan abortion laws

With the possibility that an abortion ban will soon take hold in Michigan, both women and policymakers are focusing more attention on mail-order abortion pills, which are broadly available and present a stern challenge to enforcing future restrictions.

Of the nearly 30,000 Michigan abortions in 2020, more than half involved pills taken at home to end a pregnancy, rather than a surgical procedure at a clinic or hospital, echoing national trends. The pills became even easier to obtain during COVID, when the Biden administration lifted a requirement that women visit their doctor to pick up their prescription.

Abortion law and politics were jolted Monday by the publication of a leaked draft of a Supreme Court opinion that would strike down Roe v. Wade, the 1973 ruling that established a right to abortion under the U.S. Constitution. Should that draft represent the high court’s final decision, which is expected by June, Michigan would again be governed by a 1931 state law that outlaws abortion in most instances along with the sale of pills or drugs o induce it.

Whether abortion pills remain legal in Michigan should Roe fall is “an open question,” said David Kallman, senior attorney with the faith-based Great Lakes Justice Center, which contends there is no state constitutional right to an abortion in Michigan.

That’s one of the few opinions shared across the divisive topic of abortion access. Dr. Sarah Wallett, chief medical officer for Planned Parenthood of Michigan, also struggled to provide clarity on the legality of pills under the 1931 law. “Really good question,” she told Bridge Michigan.

Equally vexing is the question of whether police and prosecutors would be able to stanch the flow of abortion pills when companies in and outside the U.S. provide them through the mail in unremarkable packaging.

“If abortion gets harder to access, or if there's a complete abortion ban in Michigan … people will be able to find the resources on the internet and access information,” Wallet said. “And we know that medication abortion is really safe.”

Here is what is known, and unknown, about abortion pills and what would become of them should abortion be once again outlawed in Michigan.

What are abortion pills? How do they work?

The abortion pill is really a combination of pills that work in two stages to induce an abortion.

The first drug is mifepristone, approved in 2000 by the U.S. Food & Drug Administration. Sold as Mifeprex and once known as RU-486, the drug disrupts progesterone, a hormone that thickens the lining of the uterus to support a pregnancy. Without progesterone, the placenta disintegrates.

That’s followed a day or two later by a series of another drug, misoprostol, which causes the uterus to cramp and empties the remains.

The drugs are approved for abortion within 10 weeks since the first day of the last menstrual period. The earlier in the pregnancy mifepristone and misoprostol are taken, the more effective.

More than 3.7 million U.S. women had taken Mifepristone for abortion by the end of 2018, according to one FDA report. In Michigan in 2020, 15,333 of the 29,669 recorded abortions — nearly 52 percent — were considered “medical abortions” rather than in-clinic, surgical abortions.

Dr. Michael Hertz, a longtime OB-GYN, recalled being a medical student in the early 1970s, before Roe, when women entered emergency rooms with life-threatening injuries and infections from illegal, botched abortions, often performed using unsanitized instruments such as knitting needles.

He said that the widespread acceptance of medical abortions, which can be taken in the comfort of a home, has made women safer.

“It allows patients to control the process,” Hertz said, “and there’s something very positive about that.”

The rate of complications from mifepristone and the resulting abortion is low, and the medication is most effective early in pregnancy.

The pill regimen successfully ended pregnancy 99.6 percent of the time, about the same rate as surgical abortions (99.8 percent), according to a 2015 study of 30,000 women in Obstetrics and Gynecology. A 2012 study reviewing data of 45,000 patients who had medical abortions found 119 were hospitalized, and 45 received blood transfusions.

“The fact that it's so ridiculously safe adds to its appeal for women with unintended pregnancies,” Hertz said.

Doctors say women should not take the pills if they have an ectopic pregnancy or certain medical conditions, including problems with the adrenal glands, or if they take blood thinners. Intrauterine devices or IUDs must be removed before taking the drugs.

With Roe imperiled, are contraceptive and abortion products harder to get?

Farah Jalloul, of the Michigan Pharmacists Association, said her members haven’t noticed any such surge in sales, but it’s early.

“It’s fairly new information that’s been released,” she said of the leaked Supreme Court draft. “Talk to me next week, it could change” by then.

Christie Pitney, CEO of Forward Midwifery, a Washington D.C. telehealth practice, told Reuters that the number of women seeking prescriptions for abortion pills has exploded this week, along with searches for information on the medication.

Do abortion pills require a doctor?

The abortion pill requires a prescription, so it’s not as easy as simply walking into a pharmacy.

The first pill in the regimen —  mifepristone — generally is given at a clinic (but doing so is not required by the FDA). The follow-up pills begin 24 to 48 hours later. Patients are generally asked to return for a check-up two weeks afterward.

The FDA’s decision in December, however, allowed pills to be prescribed by tele-health and delivered by mail, bypassing the doctor’s office entirely. That has set off a scramble in anti-abortion states to block online sales by  out-of-state and international companies (Aid Access, for instance, is headquartered in Austria) to patients in those states.

At the moment, the abortion pill remains legal, as does the so-called “morning after” (or Plan B) pill, an over-the-counter drug that stops the release of an egg from the ovary.

But if Roe is overturned and the 1931 law resurrected — there will be plenty of work for lawyers, and plenty of uncertainty for women and others.

Under that criminal statute, “any person who shall … advertise, publish, sell or publicly expose for sale any pills, powder, drugs or combination of drugs … for the purpose of procuring an abortion, shall be guilty of a misdemeanor.”

According to Genevieve Marnon, legislative director at Right to Life of Michigan, the authors of the 1931 statute wanted to ensure “witch doctors and herbalists” weren’t concocting dangerous potions to help women end pregnancies. And she said case law since then has affirmed that the law covers abortion drugs even in a healthy pregnancy, not just miscarriages.

All this makes the 1931 law still relevant, Marnon said.

It “does specifically talk about administering drugs and so I think that that would cover the abortion pill. It's a drug,” she said.

But attorneys and advocates on both sides say there’s wiggle room in the interpretation.

Kallman, the attorney who called himself “pro-life,” said there are important “key words” in the law.

First, the crime is committed by the person who “administers” the pill, not the recipient, he said. In other words, the pregnant person who takes the pill could not be charged.

And a pharmacist who fills a doctor’s prescription?

“Even there, I could see some wiggle room. It says, ‘any person who willfully administers.’ So is the act of filling a prescription or administering the actual pill administering it? he asked.

“Did they facilitate it? Did they make it possible? Sure,” he said. “But that’s not what this law says. This law says ‘willfully administer.’”

The law is 91 years old — written decades before doctors could write prescriptions after a telemedicine visit and abortion pills could be easily shipped, he noted.

Kallman said there are also “logistical issues” in prosecuting such a case. “How would a prosecutor in Michigan prosecute somebody in England who writes a prescription for something and sends it — or from another state, for that matter?”

Gable, the Wayne State law professor, agreed “it would certainly be hard to intercept these medications in the mail.”

Another complication: The same drugs used to induce abortion may be prescribed for women who are having a miscarriage, and the 1931 doesn’t clearly differentiate.

Enforcing laws against abortion pills would also set the stage for having “prosecutors selectively investigate miscarriages, subpoena medical records or shipping records, and all sorts of other really intrusive investigations. This framework has the potential to make all miscarriages ‘suspicious’ and subject to prosecution,” Gable said in an email to Bridge.

Rep. Pamela Hornberger, R-Chesterfield, introduced a bill Wednesday that would require an in-person doctor’s visit to confirm a pregnancy and the  gestational age of the pregnancy before a medication abortion can be prescribed.

If the Michigan law stands, Wayne State’s Gable said, women will be forced out of state to find the “safest option for obtaining an abortion” — something that might be “financially and logistically impossible” for too many.

“This is all really uncharted territory,” he wrote.

Marnon, at Right to Life, agreed — at least about the uncertainty ahead the abortion pill becomes illegal: “It's hard to know exactly how this will play out in a practical sense.”

The confusion, she said, “highlighted some of the issues that Right to Life and pro-lifers in Michigan will continue to face … if Michigan becomes an abortion-free state.” 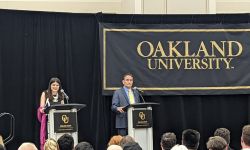 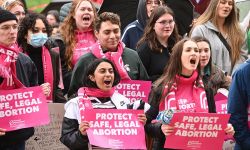