Coronavirus tears through a beloved Michigan convent devoted to service

More than 80 years ago, a group of Felician Sisters opened a convent in a small town just outside Detroit. In short order, they set about building a university, then a day-care center, a Montessori school, several elementary schools and a high school.

This was no cloistered convent. The Sisters were in front of classrooms, in hospitals, helping immigrants and the impoverished, and attending local business luncheons — savvy women, building on their evangelical mission.

“Some of the smartest business people have been those who wore habits,” said Maureen Miller Brosnan, who was taught by the sisters and sent her children to their schools in Livonia, where Brosnan is now mayor.

But within a few short weeks, what remained of this industrious, if aging, religious order has been quietly decimated.

Twenty-two cases of COVID-19 have been confirmed at the convent and at least 11 sisters have died since April 10. Five of the deaths have been tied to the virus; the causes of the other six are not yet confirmed. (At least one of the sisters had been in hospice, according to a social media post shared on the Felicians’ Facebook page.)

At 69, Sister Mary Victoria Indyk was still teaching nursing students and leading mission trips to Haiti. In the days before she died, she told friends she had COVID-19 and asked for prayers. (Photo courtesy of Sister Marilyn Minter)

Neither Sanborn nor a representative for the national group, the Felician Sisters of North America in Beaver Falls, Pennsylvania, would confirm how many of the 11 deaths were related to the coronavirus.

On Wednesday, the Rev. Bruce Lewandowski held a virtual service for the 11 Livonia sisters from the Sacred Heart of Jesus Church in Baltimore. He told Bridge Magazine he has a sister in the Livonia order.

Among the most recent to die was Sister Victoria Marie Indyk, a beloved member of the nursing staff at Madonna University. At 69, Sister Vicky, as she was known, led trips to Haiti to deliver donated medical supplies and “serve the poorest of the poor.” She would visit orphanages and take the children toys, candy and clothes, according to feliciansistershaiti.com.

“The last message we received from Sister was when she told us she was in the hospital with the virus, COVID-19,” read a blog post on the site.

She “asked us to pray for her to get out of the hospital and go back home. She thanked us for praying for her. Then we heard she took a turn for the worst that evening; she was put on a ventilator and slowly failing… this virus took her from us.”

Sister Indyk was among several Felician sisters to offer a message of solidarity and comfort to the Livonia community weeks earlier in the pandemic.

On April 8, she was among 10 sisters photographed on their Facebook page standing — masked and socially distanced — on the steps of the convent holding a sign that read “Lifting you up in prayer” aimed at the Livonia community they helped to build. 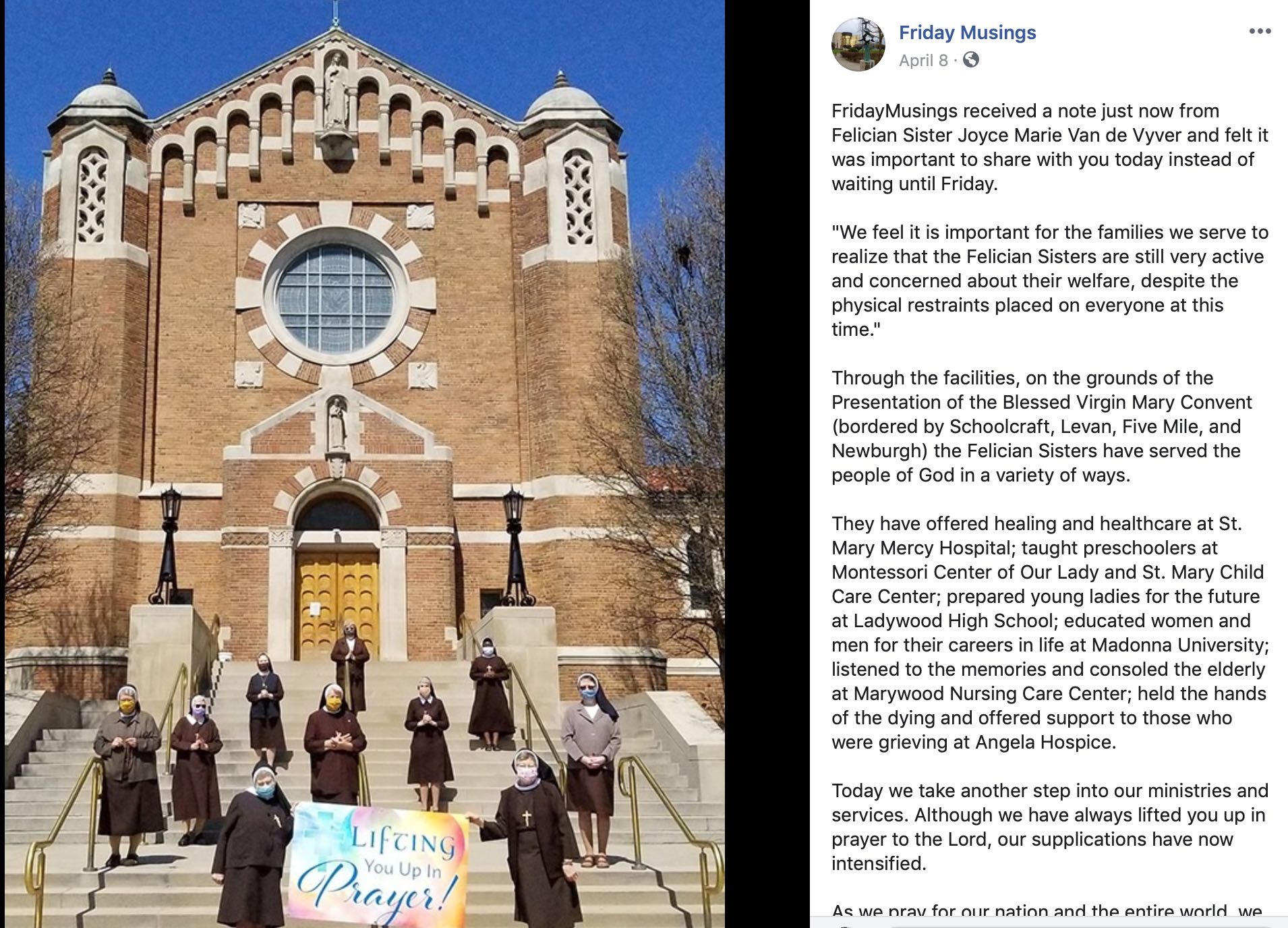 Ten Felician Sisters posed for this photo on the convent’s Facebook page in early April, assuring community members they were in the sisters’ prayers as the coronavirus descended on metro Detroit.

“She was sick and on oxygen for two days, and two other nuns on the floor were sick with (coronavirus), too,” Borkowski said he was told. “By the time she died, it was on lockdown.”

A niece, Jennifer Roschek, remembered Sister Wawrzyniak’s kindness. Her aunt lived with multiple sclerosis for over eight decades. Roschek recalled how she and her brother would laugh as children as their aunt allowed them to play in her wheelchair.

Like thousands of families, Sister Wawrzyniak’s relatives could not come to celebrate her life in person. With coronavirus, there were no funerals — no Resurrection Mass — for these women who dedicated their lives to the church.

“It’s difficult in a moment like this that we can't participate in the usual rituals that mark our religious life,” Rev. Lewandowski said at the virtual Mass.

“I know how important it is for the Felician Sisters to hold vigil for the members of the community that are dying and to accompany them as they enter into eternal life,” he said, speaking to the sisters who remain.

“It's particularly difficult during the time of the coronavirus that you can't perform those rituals, (to) take part in those moments that are so special and so unique to your community living.”

From preschools to hospice care

The Felician Sisters helped shape Livonia, which in the mid-1930s was largely farm fields with just a few thousand residents.

The Order was founded in Poland in 1855, dedicated to tending to the sick, homeless, poor and the elderly through the teachings of St. Francis of Assisi. The women even adopted the Franciscan habit. They arrived in the U.S. in 1874, first in a Polish community in Wisconsin before settling in Michigan.

Formally known as the Congregation of the Sisters of St. Felix of Cantalice, they settled in Livonia in 1936, where on Schoolcraft Road they established a formidable presence that extended far beyond their campus in education, health care and social services.

“That Felician campus is unlike anything else anymore,” said Mike Butler, a Farmington Hills attorney who runs the Facebook page “I went to Catholic School in Metro Detroit.”

In less than a square mile, the sisters founded Madonna University  and a network of schools — from a day care and Montessori school (1967), several elementary schools, and the all-girls Ladywood High School (1950) that operated for 68 years until closing due to declining enrollment in 2018.

The sisters were known as much for their strict and conservative nature as their drive to help the most vulnerable.

As president of the Ladywood High School Dads group, Butler said events at the school his daughters attended were preapproved by the sisters. He remembers small transgressions that earned him middle-of-the-night emails — mistakes that he will neither report nor elaborate on, he said.

“I do know the person that I transgressed is still alive and knows where I live,” he said, chuckling.

He never took those “corrections” personally.

“You looked at the larger picture,” he said. “You realized the life choices they made involved a lot of personal sacrifice.”

Though the high school closed, the Montessori school's waiting list remains daunting, said Brosnan, Livonia’s mayor. “When your kids are born, you send the birth announcement to them on the list,” she said.

The Felicians established Angela Hospice (1985), initially operating it from a one-room office, but expanding in 1994 as the state’s first freestanding inpatient hospice facility, according to its website. They founded Marywood Nursing Care Center (1990) and Senior Clergy Village (1992), an independent living community for senior clergy.

“They were in charge of some of the bigger institutions in the city,” Butler said.

Dave Spivey, president and CEO of Felician-founded St. Mary Mercy Livonia Hospital, said the convent had more than 800 sisters at its peak in the 1960s. Its ranks declined over the decades, mirroring trends elsewhere. According to Spivey, the Livonia order had “60 or 70” sisters in recent months.

Extending their legacy to health care

Spivey was the first layperson to lead St. Mary Mercy Livonia — founded by the Felicians in 1959 — when he took the reins in 2000. The acute-care hospital is now part of the larger St. Joseph Mercy Health System.

Beyond the religious artifacts and images, hospital meetings still open with reflections on its mission, focusing decisions on compassionate care and community, Spivey said.

And the sisters never lost their zeal for getting things done.

Several years ago, hospital leaders decided to renovate its chapel.

“Before I knew it she had half the cost covered. I should have gotten her involved much earlier.”

The chapel updates include a non-denominational space and a Muslim prayer room, Spivey said — a continuation of the sisters’ service mission and “responding to the needs of the time.”

“They are forces of nature, these women,” said Brosnan, who is board chairwoman of the hospital.

Rebecca Gibbs, a former student of Sister Indyk and now an assistant professor who worked beside her in recent years, said Indyk was like many of the sisters — always managing to squeeze more hours into a day than anyone else.

Indyk was kind but carried high expectations — something Gibbs said used to scare her as a student, but that she came to respect as a nurse.

Compassionate herself, Sister Indyk “wanted you to do it right, safely, efficiently and just as compassionately,” she said.

For years, the Felicians have grieved with acceptance and grace as their sisters died, said Jeffrey Lamparski, a longtime funeral director at Howe-Peterson Funeral Home.
The funeral home has handled arrangements for the Felicians since the 1970s, Lamparski said, but the sisters took charge of preparations for the Mass of Resurrection involving their sisters.

The funeral home would transfer the body of a deceased sister to the Livonia campus, and one of the sisters would dress the body in her habit, drape the cross through her hands, and touch up any funeral makeup.

At the Mass, comforting words from a priest would mix with hundreds of women’s voices in song. Even sisters who had outlived their own families — and many died near their 100th birthday — would pass knowing they would never leave the world alone.

“The sheer amount of them in one area, their voices,” Lamparski said — “it feels like a different world.”

Gretchen Whitmer will allow the rest of the state to follow the lead of northern Michigan next week as she lifts coronavirus restrictions, sources tell Bridge Michigan.

Bottle returns can resume June 15. Drive-ins, immediately. Ditto for housekeeping services. But you have to wait until next week for restaurants and bars. And still no word on when tattoo shops, hairdressers and trampoline parks can reopen.

The Coronavirus protesters could take a lesson from these hardworking woman on how to contribute positively to society.

This is an unfortunate tragedy - please don't smear it with politics.
Prayers to all the Felician Sister. May God watch over you all!

Politics? There weren't any nuns with guns at the protest. They were busy walking in the Word.

Sister Rose was a wonderful and patient English teacher. I still remember working on the yearbook and have all of mine from my days at Ladywood. May she Rest In Peace.