Liberty Wilson, hospitality aide, holds an intercom up to Clarence "Bo" Whitmyer, so he can speak to his daughters on the other side of the glass visiting him in the vestibule at Cass County Medical Care Facility in Cassopolis. (Bridge photo by Daytona Niles)
February 16, 2021
Robin Erb (Email)
Michigan Health Watch
Michigan nursing homes, Coronavirus Michigan, Rural Michigan

CASSOPOLIS - Phyllis Schmuhl and Linda Whitmyer step in from the monochromatic cold of a February afternoon.

Inside the heated vestibule at Cass County Medical Care Facility, it will not matter that, for the next 14-and-one-half minutes, the sisters’ conversation with their father will be the same as countless others they’ve had with him in the past.

That dementia has left him with few words.

That Phyllis’s quip — “Did you go dancing last night, Dad?” — is as well worn as the faded ball cap that signifies 96-year-old Clarence "Bo" Whitmyer’s time as a B-17 tail gunner in World War II.

What will matter is that Whitmyer’s eyes are pinched at the corners, evidence of the smile behind his mask.

After months of awkward window visits — sometimes with snow blowing around family members as they stood outside and shouted through the wind — he appears content.

And that’s a relief, Schmuhl said, smiling as she turns toward the exit after their visit.

“That was good,” she said, taking a deep breath as an aide wheeled their father back down the hallway. “He looks good.”

Residents in many Michigan facilities are not so lucky. Across wide swaths of the state, nursing homes and other long-term care facilities are now eligible under state law to resume indoor visitations with loved ones. But few appear to be making that happen.

“We hear about homes — where residents are near end-of-life, where visitation is clearly allowed — and aren’t allowing” visitation, said Salli Pung, head of the Michigan Long-Term Care Ombudsman program, which advocates for residents in nursing homes and similar facilities.

As of Friday, COVID cases counts and other health metrics had improved enough in 40 of Michigan’s 83 counties, as well as the city of Detroit, to support visits from loved ones, according to the MiSafeStart dashboard.

Equally promising, every resident of Michigan’s skilled nursing facilities that wanted a COVID vaccine has had at least one dose; and more than three-quarters have taken their second dose of the two-dose regimen, as of Monday, according to the state’s vaccine dashboard.

“I’m not hearing of a lot of facilities opening up, no,” Pung said. “I feel like we’re in the mud and we’re not moving forward.” 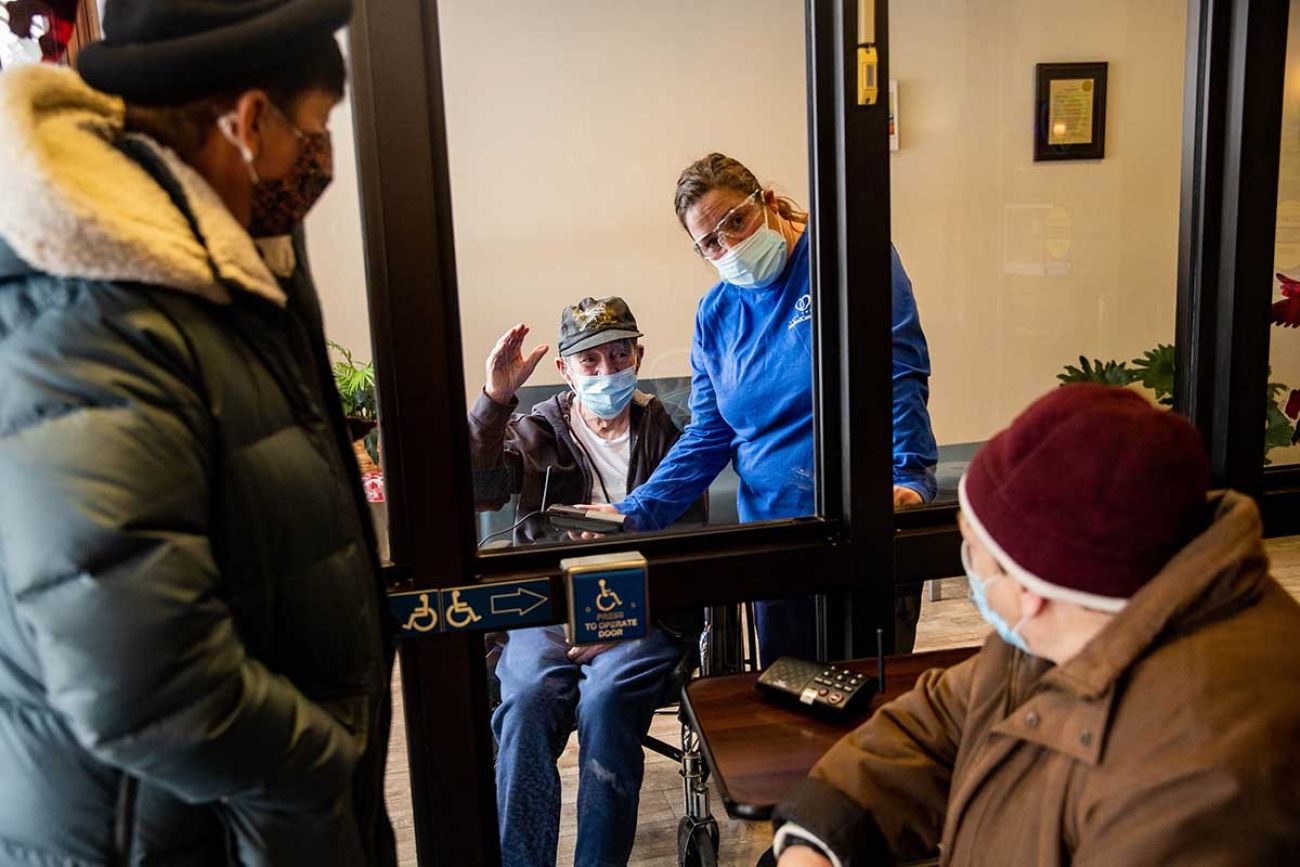 She and others acknowledge that nursing homes must balance the months of isolation residents have endured against the threat of spreading the virus in a state where more than one-third of 15,000 deaths linked to COVID are connected to long-term care facilities.

The Health Care Association of Michigan, which represents some 350 long-term care facilities, said it doesn’t track how many of its homes have opened to visitation. Each “facility has to have multiple procedures in place to maintain safety as well as the resources to support those procedures,” HCAM’s executive director Melissa Samuel said in an email to Bridge Michigan, through the organization’s spokesperson.

Resources, she said, include adequate staff, personal protective equipment, testing supplies and support, and space to allow for social distancing and privacy.

Even so, some Michigan homes have found innovative ways to connect residents with families and loved ones, showing it can be done safely, even in regions where COVID is more widespread.

A British facility provided a kernel of inspiration last year. It sealed a visiting booth made from acrylic and a bit of wood, gaining international attention, including from people running the Facebook page, Michigan Caregivers for Compromise.

“Set up a tarp. Put up a partition, so we can sit and see them,” Dana Allen, a member of the Facebook group, which pushes for policies to reduce isolation at nursing homes amid the pandemic, told Bridge Michigan.

Facilities “need to think outside the box, for crying out loud,” said Allen, who said she has been able to visit her own mother just a handful of times since COVID hit.

Here are some Michigan homes that are doing just that. 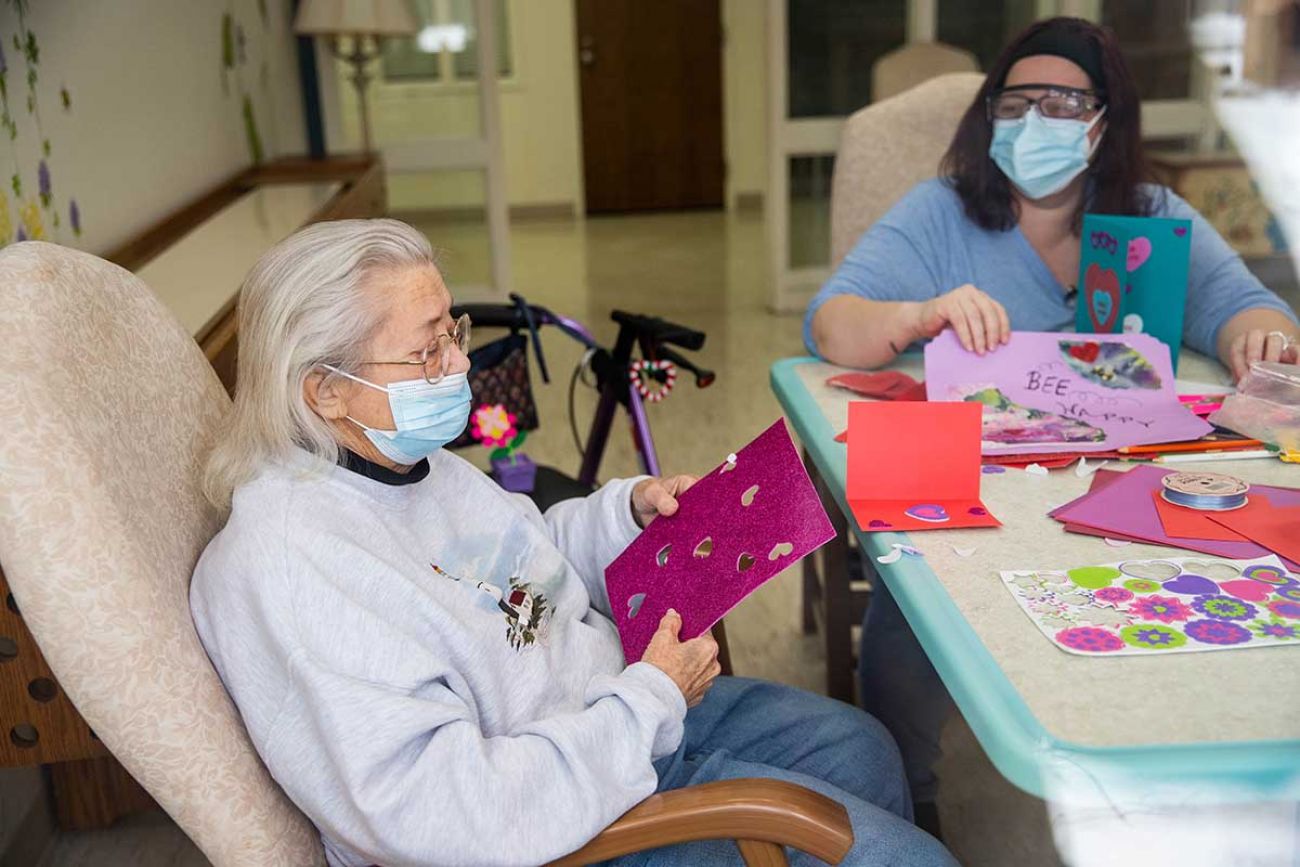 Cass County, in the state’s southwest corner, is one of about four-dozen Michigan counties whose risk levels remain too high for indoor visitation. Indeed, the facility Bo Whitmyer’s daughters visited last week has not been immune from infection, with 13 COVID-linked deaths according to state data.

But Whitmyer was able to see his children because the facility found a way to make the visit indoor-ish, if not exactly indoors. It also leveraged grant money to hire temporary hospitality aides, whose sole focus is to engage isolated residents and find ways to connect them with loved ones.

During Whitmyer’s visit, one of those aides held the intercom just inside the vestibule where his daughters’ stood — a small glassed-in area festooned with bright red Valentine’s Day cupid cut-outs.

Because the aides are “essential workers” under state emergency measures, they get a pay boost to $17 an hour. They devote all their energy to engaging residents, allowing the facility’s permanent staff to concentrate on their daily duties.

“Their jobs are to spend time with the residents,” administrator Christian Lutes said. “We realized a long time ago, what folks need most here is time.” 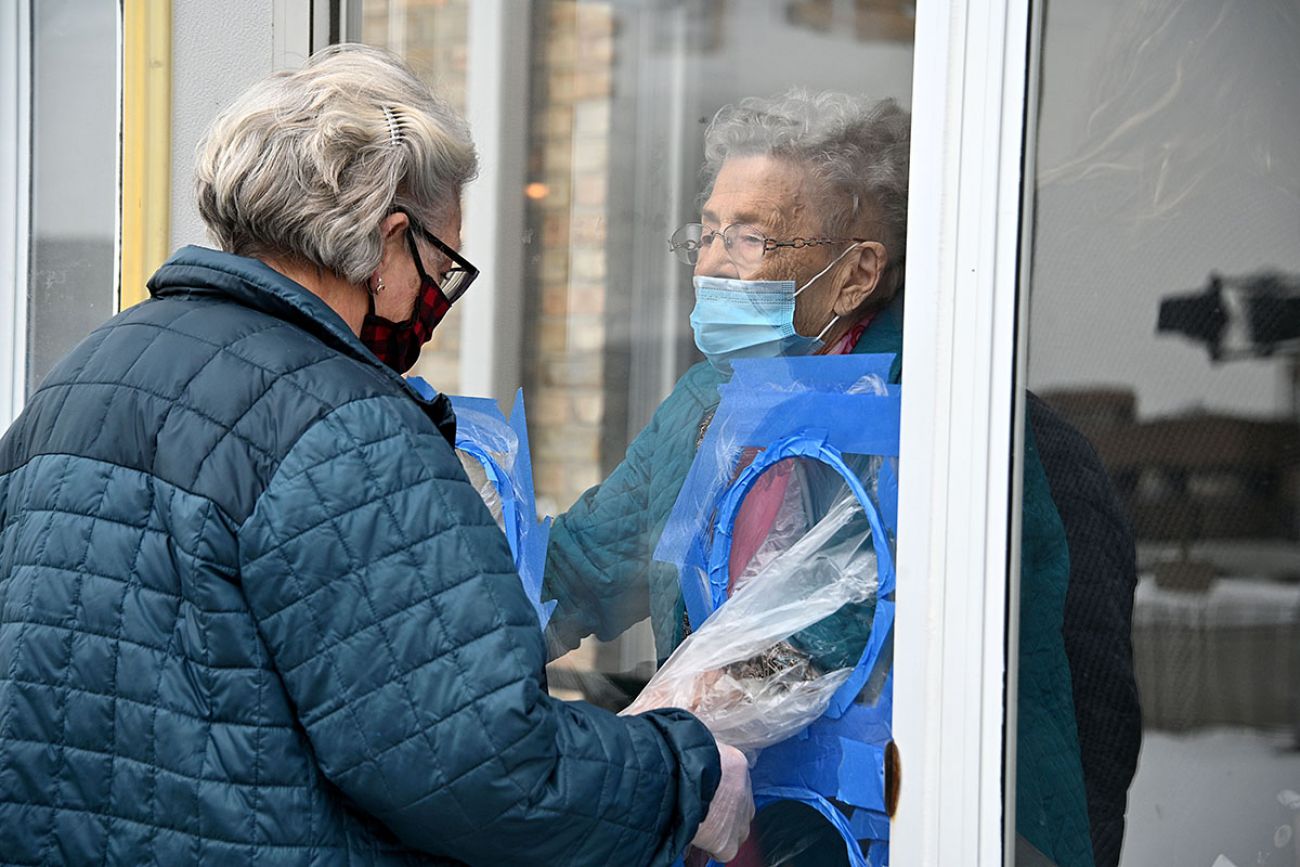 Jackie Sowa, 70, hugs her mother, Ruth Youngs, 90, at McFarlan Home in Flint, a possibility because of a donated rigging of plexiglass, duct table and garbage bags. (Bridge photo by Dale Young)

Jackie Sowa had no idea what her mother was saying as they wrapped their arms around each other for the first time in nearly a year. But she knows Ruth Youngs, 90, was comforting her as she patted her arms.

“I just sobbed through every second of the hug,” she said of their visit at McFarlan Home in Flint, where as of Monday the state had linked no deaths to COVID. “I had everyone in the place crying. I just couldn’t hold it together.”

McFarlan’s first “hugging station” was tarp draped across a door frame with arm holes cut out for garbage bags held together by duct tape — a system devised with $60 of supplies. But it was difficult for residents to see the loved one they were hugging, said McFarlan administrator Kelly Price.

So a volunteer offered to build a new station, with families of nursing home residents donating Plexiglass and other supplies. There are gloves and hand sanitizer for guests. A staff sprays Lysol after each visit, Price said.

Jackie Sowa said that the first visit with her mom was both wonderful and difficult.

“All I could do was wrap my arms around her and hold on.” 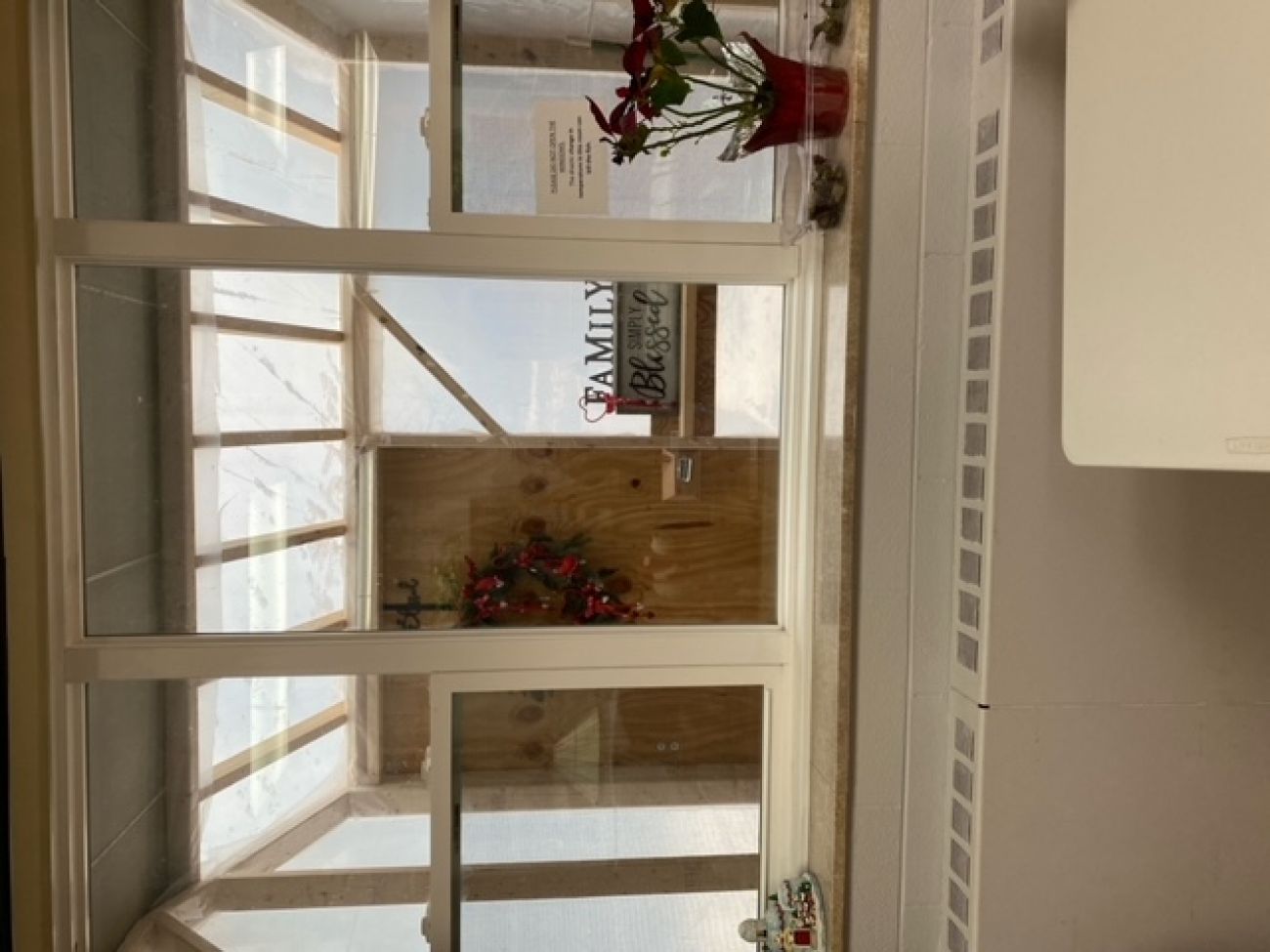 At a cost of $500 each, the Alamo Nursing Home in Kalamazoo has added two shed-like visiting structures, allowing family members to escape from the worst of the weather. (Courtesy photo)

At the Alamo Nursing home in Kalamazoo, a resident’s son, a construction contractor, built two shelters made of lumber and thick plastic just outside of the home.

The cost — covered by the home — was about $500 each, said activities director Marcia Holdeman.

The shelters are not attached to the building and they have no built-in heaters. But they are positioned tight against exterior windows of the nursing home, protecting visitors from wind, rain or blowing snow as a resident remains on the other side of the window, just inside the facility, said Julia Jackson, an infection control consultant working at the facility. A phone system allows them to talk without yelling at each other, she said.

The home, where 17 deaths have been linked to COVID according to the state, said it is taking precautions in the shelter. Visitors are screened and tested, and the heavy plastic is wiped down with disinfecting wipes, according to Jackson. 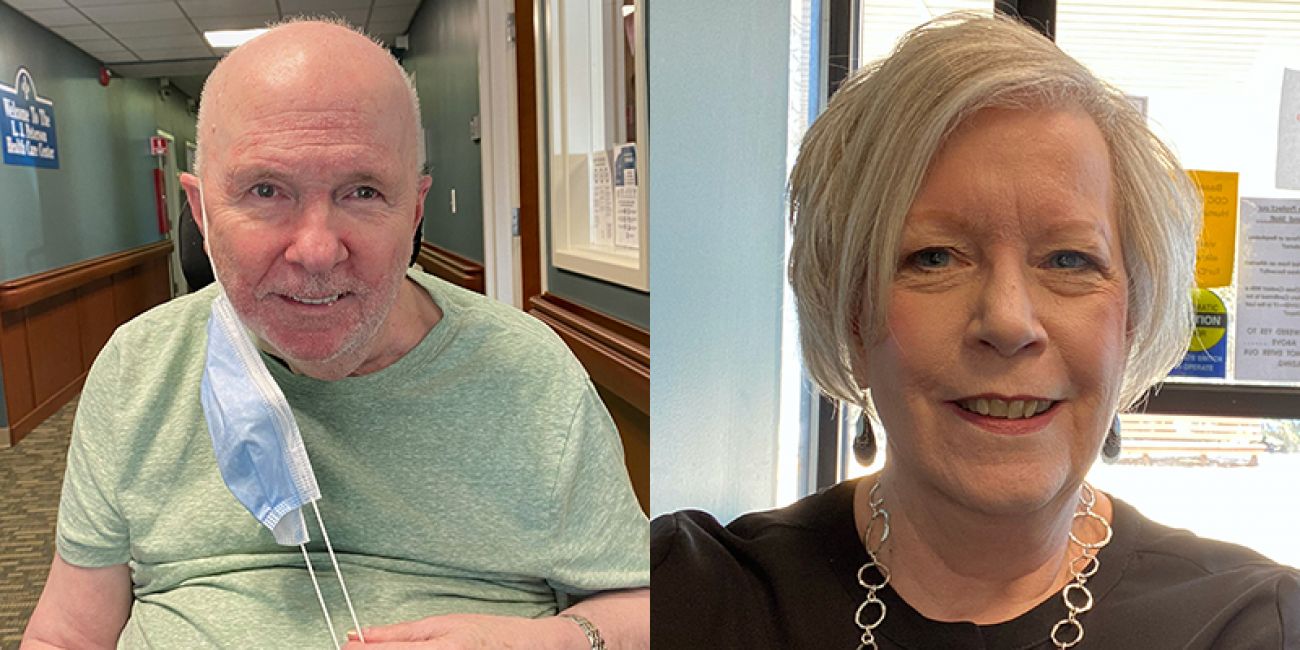 Their visits are bisected by a glass door, but Linda York, of Macomb Township, and her husband, Garry, who lives at the Village of East Harbor in Chesterfield, say they feel safe, too. They took these photos at a recent visit. (Courtesy photos)

At the Village of East Harbor in Chesterfield Township in Macomb County, Linda and Garry York are finally able to have more private conversations.

There’s no more shouting through exterior windows during window visits.

No supervising staff lingering by their side.

No hot sun. No blowing snow. No roommates.

East Harbor converted a vestibule into a visiting area. Each week, Linda York, 71, arrives at East Harbor and takes a seat between a set of exterior and interior sliding doors, to visit her husband Garry.

The door bisects their visit, but they can see each other from head to toe. Their fingers are just a window’s width apart from each others’.

Garry York, a former machine operator and saxophone player, arrived at the facility late in 2019 after a seizure brought on by his multiple sclerosis.

The two were still grieving the separation in their everyday lives when the facility locked down in March.

The pandemic has been devastating for residents of nursing homes and other care facilities, with more than 5,000 deaths among residents and staff in Michigan. Those who eluded the virus still face the emotional and physical toll of isolation.

The vestibule setup — simple and cheap — provides a respite from the despair.

On visiting days, Garry maneuvers his power wheelchair down the hallway toward the exit door that leads to the vestibule.

It’s about a three-minute route, he said.

They have a half-hour scheduled, “but if no one is (scheduled) behind us, we can even stretch it out,” Garry York said.

They talk about … what?

“He teases me — the kinds of things you do after you’re married this long,” she said. “You complete each other.”