A child might have a fever and a rash that lasts a few days, or cracked lips, red, irritated eyes and a bright red tongue. There might be swollen lymph nodes or stomach pain, gastrointestinal symptoms like diarrhea or vomiting or an unusual swelling or peeling of the skin on the hands or feet.

Doctors around the country and in Michigan are sounding the alarm that these widely varying symptoms could be quite serious, and might be a sign that a child has developed a newly identified pediatric multi-inflammatory syndrome that may be linked to COVID-19.

About two dozen Michigan children are believed to have developed this syndrome, which has symptoms that overlap with Kawasaki disease and toxic shock syndrome, but is believed to be its own disorder, said Dr. Rudolph Valentini, a pediatric nephrologist who also is the Detroit Medical Center's Group Chief Medical Officer.

More than 20 of them have been treated at Children's Hospital of Michigan in Detroit.

"We suspect that there's something that's triggering the immune system to overreact and cause widespread inflammation," she said.

The disorder also has been reported in as many as 100 kids in New York City, killing at least three, and has been found in children from California, Illinois, England and Spain.

"Until about three weeks ago or so here, we hadn't seen any such cases," Valentini said. "But we are now, and they're coming pretty fast and furious.

"These patients are severely impacted. Children are very ill. Some are intubated, some ... are requiring very aggressive IV medications and ICU-level of monitoring to manage the condition.

"So this is the new ballgame. It's a new story, completely."

It's vital, Valentini said, that parents look for these symptoms and take them seriously.

"The parent may be reluctant to leave their home because they're following the quarantine guidelines from our governor, but they need to speak with their pediatrician"  if their children develop any combination of the symptoms, Valentini said. "And we're trying to get pediatricians to be aware of this.

"The reason it is important is because a high number of these patients not only have the conditions you can see, but they have conditions on the inside that you cannot see, namely, myocardial involvement. They seem to be having myocarditis, which is inflammation of the heart muscle, causing the heart to function less than normal."

Some of the kids have come to the hospital with normal-looking hearts, but their conditions have quickly worsened, and they needed to be put on an artificial heart and lung bypass machine, known as an ECMO, Valentini said. 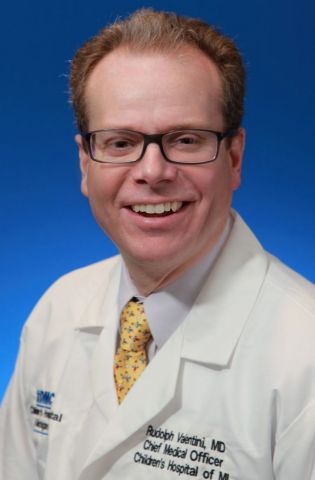 Of the 20-25 patients at Children's Hospital who have had this condition in recent weeks, Valentini said "about half of them are developing what is called shock, which is insufficient cardiac output, primarily linked to the cardiac dysfunction."

Most of the children who are treated for this condition do not test positive for active coronavirus infections, Valentini said, but some have developed antibodies to the virus, which suggest they were infected at some point prior to developing the inflammatory syndrome.

"These patients all seem to be associated with the COVID-19," he said. "Either they're acutely infected, which is the minority, or they have been exposed to the COVID-19."

It's still too soon to say how prevalent the condition is among children who've had the virus, Lloyd said.

"I think as we see more cases we'll have a better sense of exactly how prevalent this is," she said. "As of now, it seems that this inflammatory illness is a very rare complication of children with COVID-19.

"There's still some work to be done in establishing exactly what the link is between COVID-19 and this inflammatory disease," she said.

The hope is that these children will make a full recovery, Valentini said.

"It's a little too early to say that," he said, "but we're glad to say that we've had some patients successfully discharged home."

The best outcomes happen, however, when children with the condition are identified early, and treated swiftly.

At Children's, they're being treated with an immunosuppressive regimen that is often used to treat Kawasaki disorder in addition to therapies used for rheumatologic diseases, he said.

While Lloyd said it's important for parents to know about these symptoms and watch for them, she stressed that it's not a reason for panic.

"We do want the community to be aware that this condition is out there, so that they know what to watch out for," she said. "I would say if children have ... some of these signs such as persistent fevers, the rashes, red eyes, red or swollen lips, tongues ... or if they're otherwise acting ill, I would recommend that parents call their child's health care provider and seek care earlier rather than later.

"But ... I don't want parents to be panicking about this because it still is quite a rare thing that we're seeing."

Parents also should keep in mind that while it's a good idea to stay home to avoid spreading coronavirus, that shouldn't come at the expense of avoiding health care for their children, Lloyd said.

"Children are not going into the doctor to get their well child exams or their routine immunizations, which are, you know, still very important pieces of their care," Lloyd said.

"We're recommending that parents work closely with their child's primary care physician to be sure that their child can still get that routine care and the immunizations they need in the safest way possible, without just pushing everything off."

Michigan Radio reporter Will Callan contributed to this report.