More than 2 million more Michigan residents will be eligible for coronavirus vaccines in the next three weeks, a move that could lead to a steep drop in COVID-19 deaths and more than double the number of residents who can receive a vaccine.

Gov. Gretchen Whitmer’s announcement that people 50 and over with an underlying health condition or disability could get a COVID vaccine starting Monday — and anyone over 50 beginning March 22 — also opens eligibility to age groups that comprise 97 percent of the more than 15,500 people who have died from the virus in Michigan.

“Making the vaccine available (to people over 50) will have an outsized impact on hospitalizations and deaths,” said Derel Glashower, senior epidemiologist for Ottawa County.

It’s not entirely clear how providers are expected to verify underlying health conditions or disabilities for people over 50 who are eligible beginning on Monday, and state and local health officials indicated they may rely on the word of people as they schedule their appointments.

The expanded priority list — fueled by the promise of up to 4 million  additional vaccine doses by the end of March — will be distributed to a larger number of vaccine sites.

And it puts Michigan at the forefront of a movement to lower the eligibility age for vaccines; only two states — Indiana and Connecticut — have set the threshold as low as 55 years old, with most states still focusing on those 65 and older, according to a New York Times survey of states Tuesday.

Under Michigan’s previous estimates for eligibility, healthy people 50 to 64 weren’t expected to begin getting the vaccines until July.

“The right things are happening at the right time,” said Phillip Bergquist, operations chief of the Michigan Primary Care Association, that represents a network of 41 health centers throughout Michigan and their satellite sites that provide services to 730,000 Michiganders, the majority poor or uninsured. It has been notified to expect 5,200 doses next week — 1,000 more doses than this week with more to follow, he said. 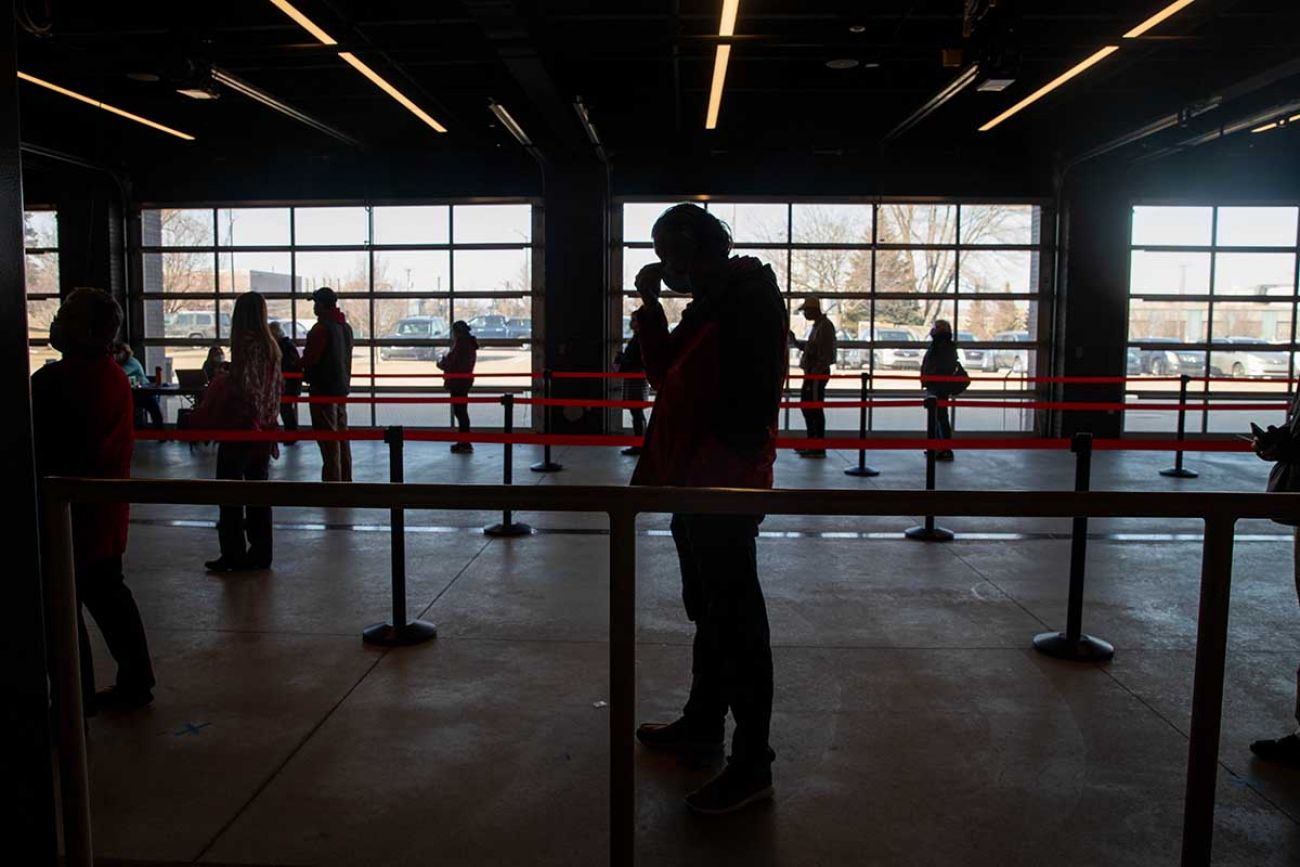 Wednesday’s announcement comes just one day after President Biden announced that a vaccine would be available for every U.S. adult who wants one by the end of May, though it could take longer to administer those doses. It was an abrupt pull-forward of his previous July estimate — and well ahead of Michigan’s own, conservative estimate of the fall.

The bullish timetable follows news that vaccine manufacturers have agreed to step up production and the introduction of a third approved vaccine, the single-dose shot from Johnson & Johnson authorized by the U.S. Food and Drug Administration Saturday.

Already, Michigan is expecting nearly 500,000 doses this week, more than double the average of the previous five weeks.

Those greater doses are a significant step toward the state’s goal of achieving herd immunity by vaccinating 70 percent of its 8.1 million residents 16 and older. But it also will put additional stress on hundreds of local vaccine providers to match the burgeoning supply and demand.

The state has said it has the capacity to vaccinate 80,000 people a day but the promised doses by Pfizer, Moderna and now the new Johnson & Johnson vaccine could mean the state would need to vaccinate well over 100,000 a day to keep pace with the expected new doses in the coming weeks.

As Bridge reported Tuesday, state and local officials say they can administer the extra doses by extending hours, working weekends, hiring extra staff and holding larger events where more people are vaccinated. Oakland County, for instance, is considering a move away from using fire stations to possibly a venue as large as the Pine Knob Ski and Snowboard resort.

Health care workers and residents of nursing homes were the first eligible for vaccines in December, and the list expanded in January to anyone 65 and older. This week, essential agriculture and food service workers became eligible.

Under the latest expansion plan:

Already, 47 percent of Michigan residents 65 and older have gotten at least the first of the two-dose regimen of the Pfizer-BioNTech or Moderna vaccine.

By opening eligibility to include anyone over age 50, Michigan now has eligible well over a third of the state’s nearly 10 million residents.

Some clinics and doctors offices will begin hiring extra staff. They include Detroit-based The Wellness Plan Medical Centers, where staff hope to offer vaccines in all five of its locations in Detroit and Oakland County starting as early as next week, said Dr. Tiffany Sanford, chief medical officer.

Sanford told Bridge that staff can check medical histories of people over 50 who are already patients at its clinics. If they are not patients, however, she said it’s more important to process people quickly than to delay vaccinations for people to obtain records documenting an underlying health condition. Sometimes, staff will have to take a vaccine-seekers word for it that they have a chronic condition, Sanford said.

“Ultimately, it’s about getting vaccines in as many arms as possible,” Sanford said.

"How much work do I want to put into gate-keeping people or chronic conditions when they'll be eligible anyway two weeks later?” she said.

A place in line

But some older Michigan residents who have waited for weeks or months worry they might lose their place when a glut of younger residents become eligible.

Although the state has seen nearly half of all people 65 and older get the vaccine, more than half have not and many are still scrambling. Now, they may be competing with 2 million more people for a coveted dose of the vaccines.

In Dearborn, Alexandra Papalas, 75, has spent countless hours on the phone over the last month trying to nail a vaccine appointment.

She said she has been able to sign up online for appointments when they become available at CVS, Meijer and Rite-Aid stores near her Dearborn home. Still, nothing. “They don’t have vaccines yet” according to their websites, the former high school teacher said.

And when she tried to sign up at a large hospital system, she was asked to enter a verification code into the “next screen.” She was kicked out of the system four times, ultimately forced to drive to a nearby Verizon store so that a salesperson there could show her how to retrieve the verification code from one cell phone screen and register it on another screen.

It’s not that Papalas resents younger people who soon will be eligible, too.

It’s that she worries that the lines not only grow longer, she will lose her place.

A younger generation “is more computer savvy, so it will know how to do this, to get in line, too,” she said.

Lynn Sutfin, spokesperson for the Michigan Department of Health and Human Services, said providers are “expected” to continue to prioritize those 65 and older and those 50 to 64 may face wait lists.

Vail, at Ingham County, said she hears such frustrations and she again urged patience.

Some counties still have too few vaccines and long waiting lists; others are ready to schedule right away for vaccines, she said.

Ingham County and other providers work in “strike teams,” setting up  clinics in low-income housing, for example, so that the system doesn’t unfairly favor those at ease on a keyboard, Vail said.

While everyone will get a vaccine, she said, “it’s going to take time.”