Older adults in Michigan frustrated in efforts to get COVID vaccine

But each time he tried to register her on the Kent County Health Department site — furiously filling in the blanks with her name, birthdate, etc. — the appointment disappeared before he could push “submit.”

So on Saturday morning, Raymer brewed a cup of black coffee, sat at his computer, and didn’t leave until he finally got in. He compared the effort to trying to nab a hot concert ticket, or call in for a prize from a radio station.

“I got in, but it was dumb luck,” Raymer said. “It was only because I had the time and I had the tools to sit there and keep hitting ‘refresh.’”

Like countless Michiganders, Raymer discovered that it’s one thing for Gov. Gretchen Whitmer to declare that anyone 65 and older could get a vaccine for the coronavirus beginning Monday, and quite another to score an appointment.

County health departments, hospitals, senior centers and cities across the state say they’re being bombarded by calls from residents pleading for a vaccine for themselves or for loved ones, after Whitmer announced last Wednesday that older residents and a broad range of essential workers would be eligible starting Monday.

But interviews Bridge Michigan conducted with health officials and ordinary residents suggest that, in many regions, there are few answers and even fewer vaccines.

A state website offers links to Michigan’s local health departments. But at least 15 of those offices aren’t yet taking appointments for anyone beyond the first phase of vaccine recipients — frontline health care workers and those in long-term care facilities. Of remaining departments, there are links to an array of methods for trying to register.

Some health departments and hospitals advise visitors to return later because there are no vaccines available.

“We ask that our seniors have patience as we recognize that there is not enough vaccine for every currently eligible individual with the limited supplies we have,” Lynn Sutfin, spokeswoman for the Michigan Department of Health and Human Services, told Bridge in an email Tuesday.

“There will be some places that run out of vaccine and do not have enough appointments available."

While some local health departments didn’t have enough vaccines, others for a time had unused supplies during the first phase of vaccinating. That’s why the state loosened eligibility limits last week, Sutfin said. Michigan has a goal of vaccinating at least 70 percent of Michiganders age 16 and older.

The state is collaborating with pharmacies to help administer the vaccines in long-term care facilities and with the National Guard to further speed up the distribution, she said.

Still, confusion on vaccines appears to be widespread.

In Genesee County, a public health official told a local TV station Monday evening that older residents should be able to get information on vaccines from senior centers.

Patty Johns, deputy director of the Clio Senior Center, was bewildered when she heard the news report while making dinner.

“Why would they call us? We don’t know anything” about how to get a COVID vaccine, she told Bridge Michigan.

When she pulled into the parking lot of the senior center Tuesday morning, there were a half-dozen cars waiting.

The first driver, she said, was a senior center regular who said his wife instructed him to arrive early to ensure their place on a waiting list.

The center’s voicemail had filled up overnight, too.

In Detroit, the city set up a special vaccine call line after the governor’s announcement last week. On Monday, it was overwhelmed by more than 120,000 calls, Mayor Mike Duggan said Tuesday at a news conference.

“If you tried to dial, you almost certainly didn’t get through,” he said, noting that the call center boosted its staff from 42 to 76 operators.

“A bunch of the calls came into the mayor’s office to tell me — as if I didn’t know — that you couldn’t get through on the line,” he said.

Only 4,000 of the callers were able to get through to the call center, but only half of those callers were eligible. Others simply had general questions about eligibility. 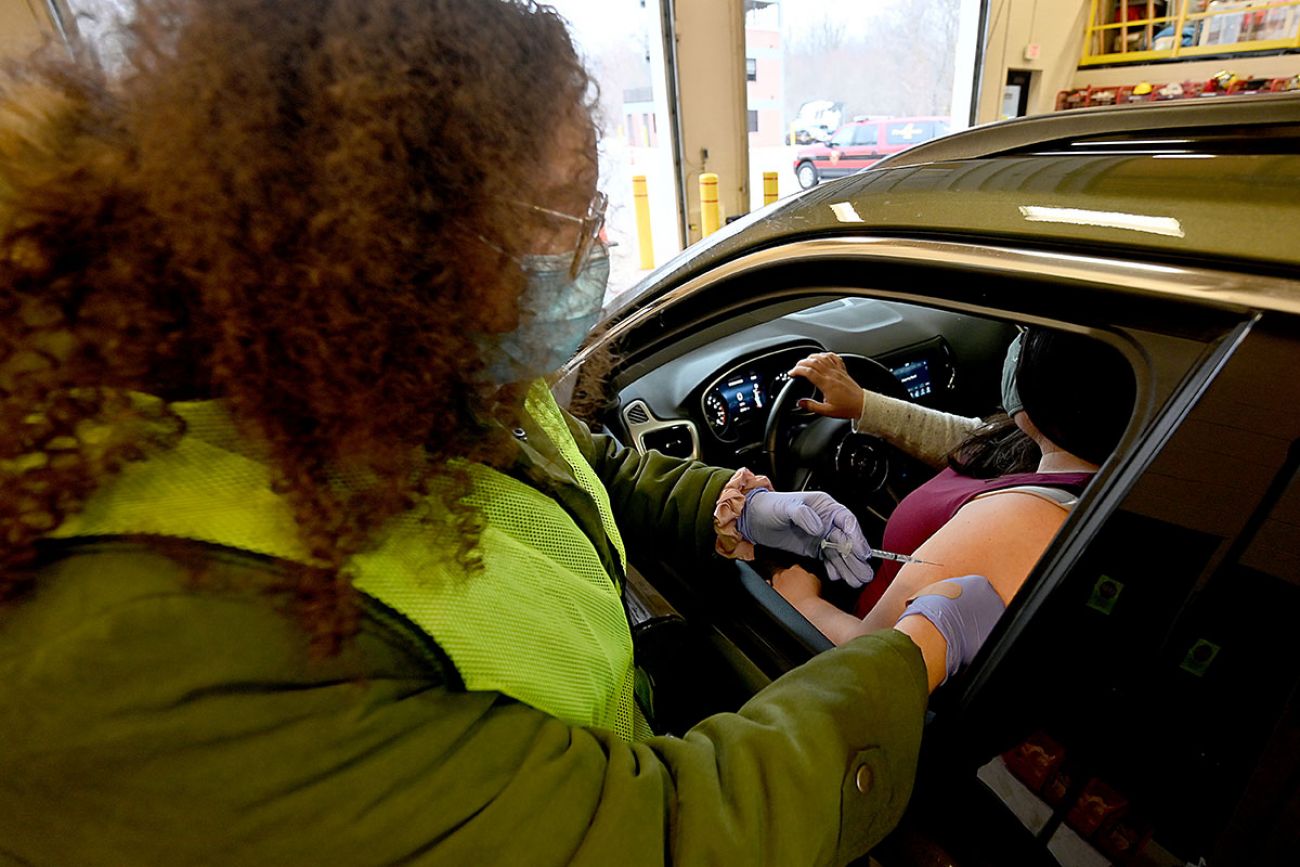 Many of those who called his office, Duggan said, were confused that after Whitmer’s announcement last week they couldn’t get an appointment.

“There was a difference between saying 65-year-olds are eligible and actually having the vaccine,” said Duggan, a Democrat, who faulted the federal government for the vaccine’s slow rollout, saying the state is getting only a slice of the vaccines it had expected.

Some Republicans in turn blame the Whitmer administration.

Against the confusion, health departments and hospitals have publicly pleaded for patience.

Even as the governor announced the expansion of those eligible for the vaccine last week, phones at the health department that covers Delta and Menominee counties in the Upper Peninsula began ringing. A normal day would mean 50 to 75 calls. By the end of that day, “the phone system had recorded more than 4,000 separate calls,” Health Officer Mike Snyder told Bridge.

“People would just call, not get through, hang up, and call again,” Snyder said. At the time, his department had just 300 Moderna vaccines for the two counties, enough for 150 people under the two-dose regimen.

Snyder said UPS delivered 975 Pfizer vaccines on dry ice Monday morning — still far short of the 2,400 people who have set up appointments. He said residents were told their appointments were contingent on supply.

Snyder said his office was set up to handle people age 75 and older. “But when they changed it to 65, we just couldn’t keep up… I don’t know if you can really blame anyone. I think it’s just a supply chain issue.”

The halting rollout of vaccines in Michigan, and across much of the country, may soon become more complicated.

U.S. Health and Human Services Secretary Alex Azar announced Tuesday that the federal government will release millions of additional vaccines from its reserve — vaccines that originally were being held as second doses. He also urged states to offer vaccines to anyone with an underlying health condition in addition to older residents.

The changes, he said, reflect “the urgency of the situation we face.” He also suggested that some states have micromanaged distribution so that vaccines are being stalled. Allocations now will be based, in part, on the pace at which states distribute and administer the vaccines, he said.

As of Tuesday, Michigan ranked 40th in vaccines administered for every 100,000 people, according to data from the U.S. Centers for Disease Control and Prevention. The state had administered 296,588 doses of the 831,150 shipped to it, according to state data.

Raymer, the Grand Rapids man, called searching for a vaccine for his mother “without question, one of the more frustrating experiences I’ve dealt with.”

Why would the state open up vaccines to those 65 and older, he asks, when it was struggling to get it out to the first group of recipients?

Doing so only “created additional demand for the same limited product.”

Johns, of the Clio senior center, said the facility may eventually be a site for a vaccine clinic in a partnership with a local pharmacist. But not yet. There are no vaccines.

In the meantime, she said, the lack of information is disheartening for older people anxious about the virus and cooped up.

It offers hope “they can get out, that they’d finally be able to go to the grocery store without waiting for their daughters and pick up those grapes or vegetables.”