Thousands of health care workers across Michigan who would be first in line for a coronavirus vaccine are declining to take it, potentially slowing efforts to curb a pandemic that has killed over 352,000 nationally and more than 12,600 in Michigan.

In Wayne County, just over half of first responders agreed to take a COVID  vaccine, with roughly 600 of 1,600 declining, a county spokesperson told Bridge Michigan on Monday.

In Ingham County, it's not precisely clear how many hospital and emergency workers have declined the vaccine. But based on a survey among health department staff and national surveys, it appears that more than 1 in 3 health workers are declining the coronavirus vaccine for now, according to Linda Vail, the county's health officer.

Hesitancy among workers in healthcare settings may help explain why Michigan has had one of the lowest COVID-19 vaccination rates in the country.

As of midday Monday, just under 100,000 people in Michigan have been given the first dose of the two-stage vaccine, or 992 people for every 100,000. Only six other states had a lower rate of vaccinations — North Carolina, Arizona, Alabama, Georgia, Mississippi and Kansas, according to data from the federal government.

Nationally, the rate is 1,390 vaccinations per 100,000 — or 40 percent higher than the Michigan rate. (Monday evening the state updated its vaccination data to show nearly 129,000 doses had been administered but updated comparisons with other states were not immediately available.)

Though surveys in recent months underscored uncertainty about the vaccine among much of the public, health leaders told Bridge they found it disheartening to see reluctance among workers within their industry.

“There were some [EMS] departments that everybody said, ‘We will come and take it,’” Dr. Mouhanad Hammami, chief health strategist at the Wayne County Department of Health, Veterans & Community Wellness, told Bridge.

Indeed, some EMS units sent more than a dozen workers in a truck for vaccines. “But then you have, maybe in a company, 25 EMS workers and only two said, ‘We want the vaccine.’ ”

Health care workers, he said, are “privileged to be amongst the first” to get the vaccine, and presumably “would be more informed about … a vaccine trial and have a little bit more trust.”

A spokesperson for the Michigan Department of Health and Human Services said there have been “no significant obstacles” to distribution of the vaccine, which the state hopes to administer to 5.6 million people, or 70 percent of the state’s population over age 16.

“This is the most massive vaccination effort ever undertaken in the country, and every state is grappling with vaccine distribution going slower than needed to end this pandemic as quickly as possible,” Lynn Sutfin of MDHHS said in an email. “Launching mass vaccinations over the December holiday season created delays with some individuals intentionally delaying vaccines for themselves until after the holidays and clinics not being operational due to the holidays.”

Sutfin did not directly address why Michigan has had one of the nation’s lowest rates of COVID vaccinations.

She said the state does not yet have data on vaccinations among staff at nursing homes and other long-term care facilities. Several other states, including Ohio, have reported high rates of vaccine refusal among staff.

Sutfin said the state is looking to improve vaccination rates by encouraging hospitals and health departments to administer 90 percent of doses within seven days of receipt and clarifying who can get the vaccine, as well as telling hospitals that they can vaccinate health care workers who may not be their own employees.

“We will continue to evaluate our overall strategy to increase vaccination numbers in Michigan,” she said.

Others note some hiccups in the logistics of vaccine distribution.

Ruthanne Sudderth, a spokeswoman for the Michigan Health & Hospital Association, a hospital industry group, said hospitals tell the state how many doses they need in the following week, with the state relaying that message to the federal Centers for Disease Control and Prevention.

But she said that when the federal government notifies hospitals about the delivery of new doses, it generally offers a range of dates rather than a firm delivery time. That makes it challenging for hospitals to set up staff and location times for employee vaccination drives, and some have been canceled because of those problems.

“So far, the primary barrier to faster vaccination has been the lack of consistent and timely information about how much vaccine hospitals in Michigan will receive from the federal government,” she said in an email to Bridge. “With little lead time on quantity and arrival day, it’s very difficult to plan daylong employee vaccine clinics and to know what other community health care providers the hospitals should try to vaccinate.”

Sudderth said preliminary reports she has seen from hospitals show 75 percent to 80 percent of eligible health care workers are agreeing to get the vaccine.

As of noon Monday, federal data showed Michigan hospitals and health departments had helped the state administer 26 percent of the 378,925 doses that have been shipped to the state, which compares nationally to 32 percent of 15.4 million doses. (Data released by the state Monday evening showed that 34 percent of doses have now been administered in Michigan, but updated numbers for other states were not immediately available.)

At Hillsdale Hospital in southern Michigan, staff has been able to administer as many doses as it has received, said Rachel Lott, director of marketing and development.

In Ingham County, officials have moved down the list of healthcare workers so available vaccines are used as quickly as possible, said Vail, the health officer. The health office will call organizations with eligible workers — an EMS group, for example — and ask how many vaccines they’ll need.

A group of, say, 40 workers, might have 25 people who will want the vaccine, she said.

As soon as they’ve set aside slots and scheduled those 25 people for their drive-thru vaccination clinic, officials move to another group of frontline responders and down through the subgroup of health care workers deemed eligible as Phase 1a, or top priority, recipients under the state’s vaccine distribution plan. Currently, Ingham is the only county on the state’s vaccination dashboard where the number of doses administered is listed as “high.”

Any health worker or long-term care resident or staff as defined in Phase 1a is eligible for a vaccine in Ingham County, she said. In the coming days, the county will open up available vaccines to Phase 1b, which are other “frontline essential workers and individuals 75 years of age and older,” she said.

“The last thing we want is any vaccine sitting here,” she said.

Ingham and others say they hope that those who are reluctant to get the vaccine will change their minds as co-workers and friends receive it.

Mistrust of an impending COVID-19 vaccine ran high across the United States in the early months of the pandemic, as governments across the globe raced to develop an effective vaccine. The rapid pace of vaccine trials worried some, with skepticism abetted by unfounded conspiracy theories. More recently, public acceptance of the vaccines has improved, as positive results about the vaccines’ safety and effectiveness were publicized and two were approved for use in the United States.

The first vaccine was approved for emergency use in the nation less than a month ago. There has been little time — sandwiched between testing and contact tracing and caring for the sick — to educate the public.

“Certainly there is room for education,” said Nick Derusha, president of the Michigan Association of Public Health, which represents the state’s 45 local health departments. 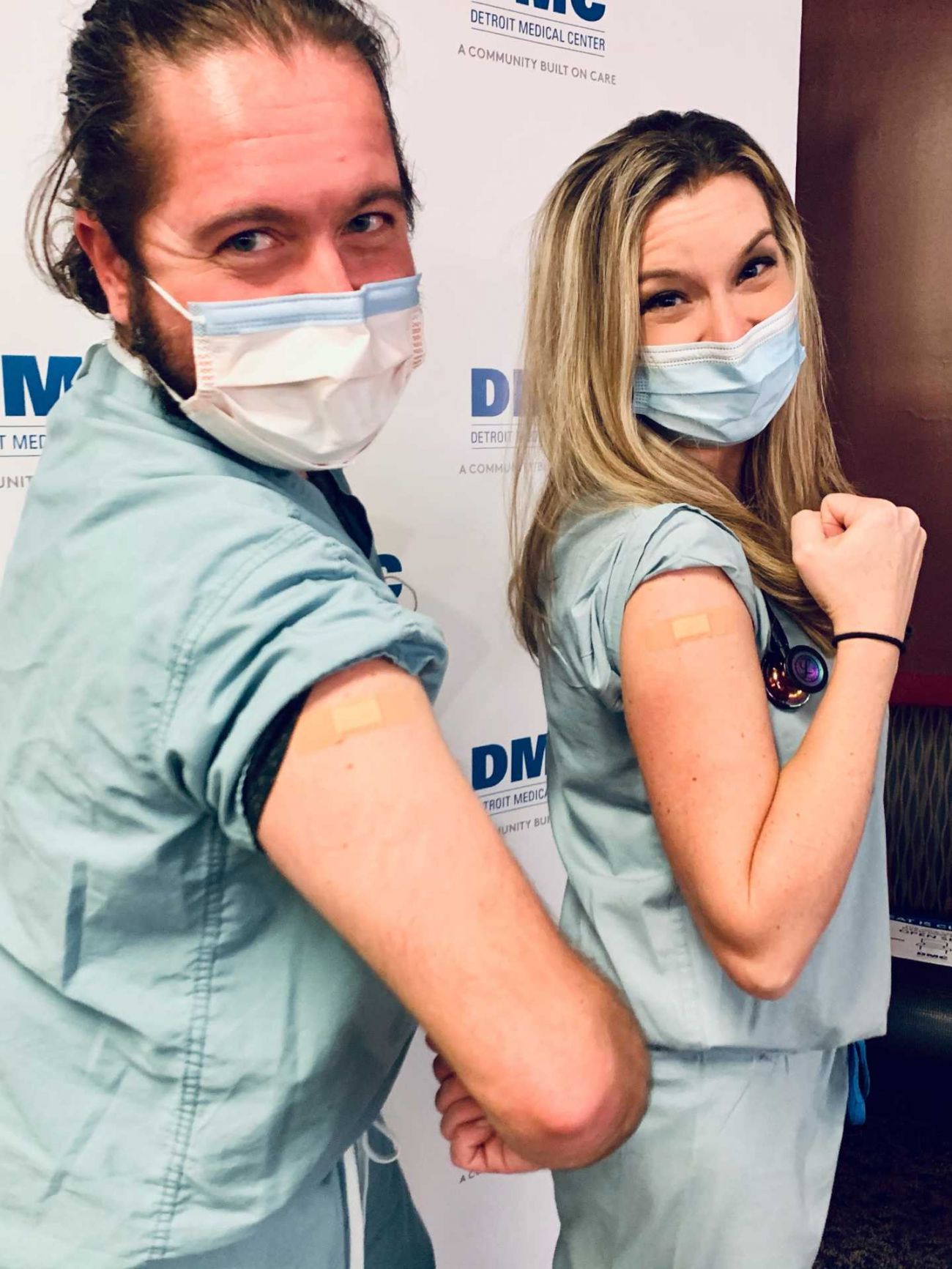 Kevin Dazy, a pediatrician at Children’s Hospital of Michigan in Detroit, was surprised to learn of health care workers who were reluctant to get the vaccine.

His wife, a nurse, also has received the vaccine.

Cortney Mazur, a nurse practitioner at Children’s, was likewise surprised. She said she was aware only of a few co-workers who were reluctant to get vaccines, but they “more and more, they are coming around.”

There may be other reasons for the slow distribution of vaccines, including the distance between vaccine shipments and recipients in some rural areas. Vaccines were delayed more than a week for residents and staff in long-term care facilities in a four-county health district in the eastern Upper Peninsula, for example. That’s because there are no Walgreens or CVS pharmacies in those Luce, Mackinac, Alger and Mackinac counties, said Kerry Ott, spokeswoman for the LMAS District Health Department.