Update Dec. 4: You can smoke pot in Michigan but not buy it. What you need to know.

Pot smokers in Michigan will be able to grow and keep more marijuana ‒ and pay less in taxes ‒ than users in most other states if Michigan votes in favor of recreational marijuana this fall.

Nine states and Washington D.C. have legalized recreational marijuana to some degree. Michigan will become the 10th if voters, as expected, approve the ballot measure in November.

Each state handles regulation on its own terms. How does Michigan’s ballot initiative compare with laws across the country? 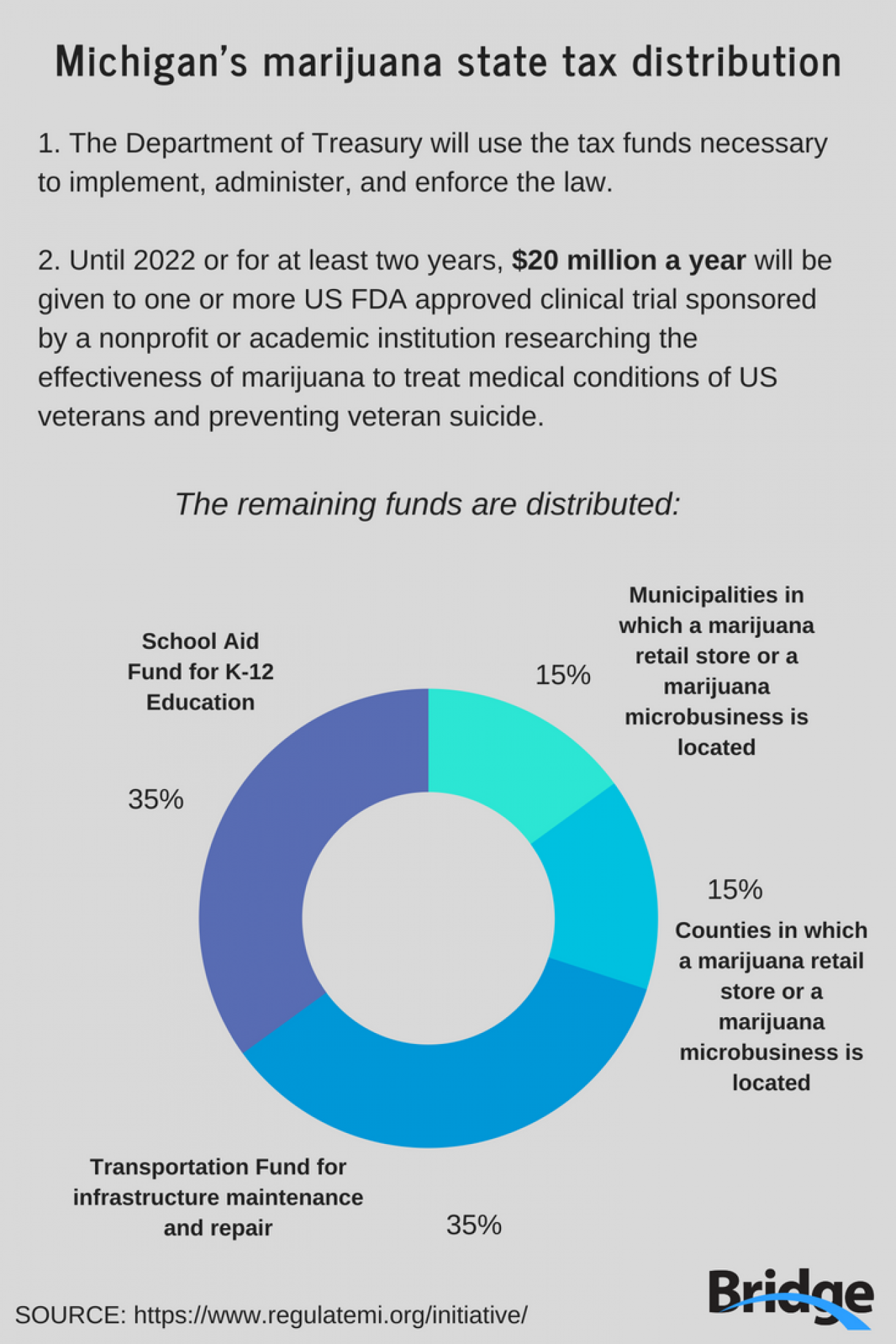 Several restrictions in the Michigan initiative are staples of recreational pot regulations across the U.S.:

Where Michigan breaks with the pack is quantity. With the exception of Maine, all the other states and D.C. limit personal possession to one ounce. Like Maine, Michigan would permit up to 2.5 ounces of flower possession.

The impact of a high possession limit remains to be seen, as legal sales have not yet begun in Maine. Josh Hovey, spokesman of the Coalition to Regulate Marijuana Like Alcohol (CRMLA), the organization behind the Michigan initiative, told Bridge this limit was chosen to be consistent with Michigan’s limits for medical marijuana. Medical marijuana in Michigan limits personal possession at 2.5 ounces of flower and 5 grams of concentrates. “The legislature did a thorough job in creating a medical marijuana licensing system and...we wanted to make sure there wasn’t a lot of confusion.”

It’s hard to understand the debate about recreational pot if you don’t understand key words. Here are terms you need to know to partake in the discussion:

And as with medical marijuana, recreational growers would be permitted to grow up to 12 cannabis plants, which is also the household limit.Other states limit individuals to 3 to 6 plants, though a household limit of 12 is more common.

The Michigan initiative asks consumers to pay far lower taxes than many  states ‒ a 10-percent excise tax compared with up to 37 percent elsewhere.

Tax revenue from Michigan pot sales first goes to the state treasury to cover the cost of regulating and enforcing the law.

After that, $20 million a year for the next several years is slated for one or more U.S. FDA-approved clinical trials to research the effectiveness of marijuana to treat medical conditions of U.S. veterans and prevent veteran suicide.

Of the remaining tax money: 35 percent would go to K-12 education and 35 percent to the state Transportation Fund for infrastructure repairs and maintenance. The other 30 percent would be split among municipalities and counties with a marijuana business within in their boundaries.

A 10 percent excise tax, to be levied at consumer point of sale, is the main source of revenue generation. Hovey said the coalition aimed for a rate that was “middle of the road,” drawing in new state funding while reasonable enough to squeeze out illegal dealers.

Indeed, the 10 percent excise tax is among the lowest in the nation.

The gold medal for highest sin tax goes to Washington State, where marijuana brought in $315 million dollars in 2017 thanks to a 37 percent excise tax. Colorado, which also voted to legalize marijuana in 2012, taxes marijuana at 15 percent and made $247.4 million in the same timeframe. These rates are before any additional taxes, such as state or local sales taxes. According to the Washington Post, revenue collected in these states exceeded projections but still comprised “less than one percent of state budget expenditures.”

Greenlee voiced skepticism that the $200 million in revenue projected by advocates would have a notable impact in “a state that has budget of $55 billion….”

Hovey admits marijuana taxes “won’t fix all of our budget problems,” but insists “it will be significant.”

A chill change? Or the coming apocalypse?

The impact of legalizing marijuana ‒ negative or positive ‒ remains a bright green rorschach test. What you see depends on how you look at it.

Looking at the record in other states, neither the worst fears of critics nor the grandest promises of advocates have come to pass.

Advocates contend legalization will benefit minorities who are subject to disproportionate enforcement of drug laws by police. Redirecting money from dealers’ pockets to state coffers is another common refrain for pro-legalization groups. Pulling this money from the black market, they argue, also will make it easier for the state to fund schools, roads and other public services.

Healthy and Productive Michigan counters that “any revenue is outweighed by the societal costs” ‒ higher rates of workplace injuries and impaired driving accidents. Opponents also raise concerns that marijuana is a gateway drug (a contention in some dispute), with Greenlee arguing that “if you look at the people who do the harder drugs” almost every single one tried marijuana first.

As with most debates, reality seems to reside somewhere in the middle.

Marijuana taxes provide new funding, but not enough to solve all budget short falls. Usage rates for young adults in other states are up, but teens are smoking less in Colorado since that state legalized pot. And Washington state found no increase in drug abuse treatment since its law passed. States that legalized medical marijuana showed no overall increase in fatal accidents, and even a decrease in traffic deaths in some places (researchers theorize that giving patients access to medical marijuana may decrease alcohol consumption). Drug arrest rates also fall, but not equally for all demographics. Illegal drug markets may shrink, but do not melt away entirely.

The impact to date is perhaps best summed up by a 2016 study on recreational marijuana policy titled, “A Dose of Reality.” Researched by the Cato Institute, a free-market think tank, it found “little support for the stronger claims made by either opponents or advocates of legalization.”

Michigan’s future may be as hazy as Ann Arbor during Hash Bash, but it is likely one not one as extreme as either side espouses.