State government is a huge operation with responsibilities (and expenses) in every corner of Michigan. Whether you realize it or not, you interact with this government constantly every day… Every time you drive drop off your kids at school… Pay college tuition… Take a drink of tap water or flush a toilet… Commit or are the victim of a crime.. Use food stamps or publicly funded Medicaid insurance… Fill up your gas tank and drive to work… Go to a state park… Go hunting or fishing… Report a workplace safety or civil rights problem… Or, quite literally, every time you take a breath (the state monitors and regulates air quality).

Safely and efficiently doing all these things and much more is the responsibility of state government and its 50,000 workers. Paying for it all in a balanced state budget every year is one of the first and most important constitutional responsibilities of Michigan’s governor and 148 state legislators.

State government in Michigan is a $56 billion annual enterprise. The federal government pays more than $20 billion of that – most of it to help fund welfare programs and health care for the poor. Michigan taxpayers are on the hook for the rest – about $32 billion paid for by a wide range of taxes and fees.

After significant cuts during the Great Recession, state government spending has grown in recent years during the economic recovery. After adjusting for inflation, state spending from state resources in fiscal year 2017-2018 is 10 percent higher than in 2011-2012. Notable changes between those two budgets include reduced prison spending and increases in roads/transportation and K-12 and higher education. 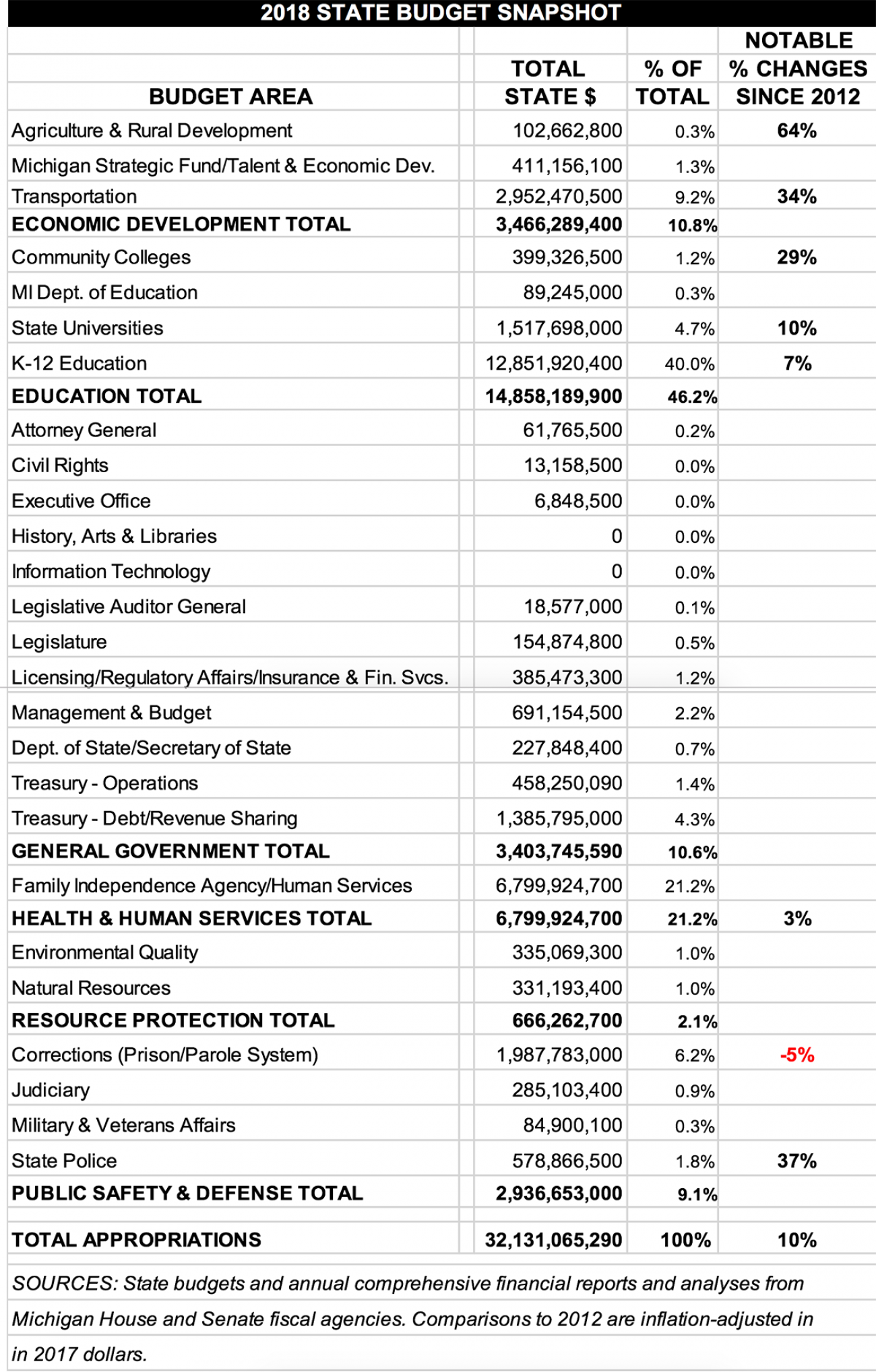 “Cutting wasteful government spending” is a perennial favorite among campaigning politicians. Surely there are efficiencies to be found in any $56-billion-dollar enterprise like state government. Yet it is also worth noting that the size of Michigan’s state and local government workforce is 2nd smallest in the country. (See the “100 Michigan Facts” appendix for details and sources.)

K-12 and public university spending also are frequent campaign fodder. Michigan’s current state budget spends more on both K-12 and universities than in other recent years. But Michigan’s investment lags far behind many other states. Inflation-adjusted per-pupil spending dropped by 7 percent between 2005 and 2014 – the third worst K-12 investment trend in the nation. Likewise, the majority of states invest more than Michigan in higher education – tuition here has risen dramatically as a result. (See the “100 Michigan Facts” appendix for details and sources.)

Michigan will spend more on transportation and roads this year, thanks largely to a partial road-funding measure passed by the governor and legislature in 2015. Yet a $4 billion unfunded annual infrastructure gap remains in Michigan.

Proponents of a part-time legislature proposal voters may see on this year’s ballot promise taxpayer savings as one of the benefits. No matter your view on what kind of legislature Michigan should have, this reform would mean little to taxpayers’ wallets. The entire annual budget for the Michigan Legislature is $154 million. Cut that in half and the savings amount to $1 for every $500 in state spending from state resources.

Last point, and it’s a troubling one, though you likely won’t hear much about it on the 2018 campaign trail… The state budget is ill-prepared for the next economic downturn and pocked with future liabilities and special diversions approved by policymakers, according to a 2017 Citizens Research Council of Michigan report.

Big political fights driven by these budget pressures are likely in the years ahead.