Demand for Michigan workers is very high, but many have given up looking

Special report
Demand for Michigan workers is very high, but many have given up looking

Michigan paydays aren’t what they used to be. Many paychecks are smaller than a generation ago. There are fewer paychecks, too. Still, the current climate for workers is measurably better than the depths of the Great Recession in 2009-10. Looking ahead, the path to prosperity looks rocky for many future workers.

Pulling Out of the Great Recession Tailspin

As anyone who lived and worked through it remembers, Michigan lost hundreds of thousands of jobs in the Great Recession. The glass half-empty view… At the end of 2015, total Michigan employment was still 2 percent lower than in 2006. The glass half-full view… After several years of recovery, Michigan had 9.8 percent more jobs in 2015 than in 2010.

Michigan has experienced eight consecutive years of payroll growth and better than the national average gains the last few years. But the recovery has been uneven, and, unlike previous recoveries, didn’t include a full return to widespread, high-paying manufacturing employment. As of the beginning of 2018, Michigan’s unemployment rate is below 5 percent, near historical lows, and largely mirrors the national rate. But that raw number masks the fact that a wide range of Michigan adults simply stopped looking for work. Michigan’s adult workforce participation rate ranks near the bottom nationally. 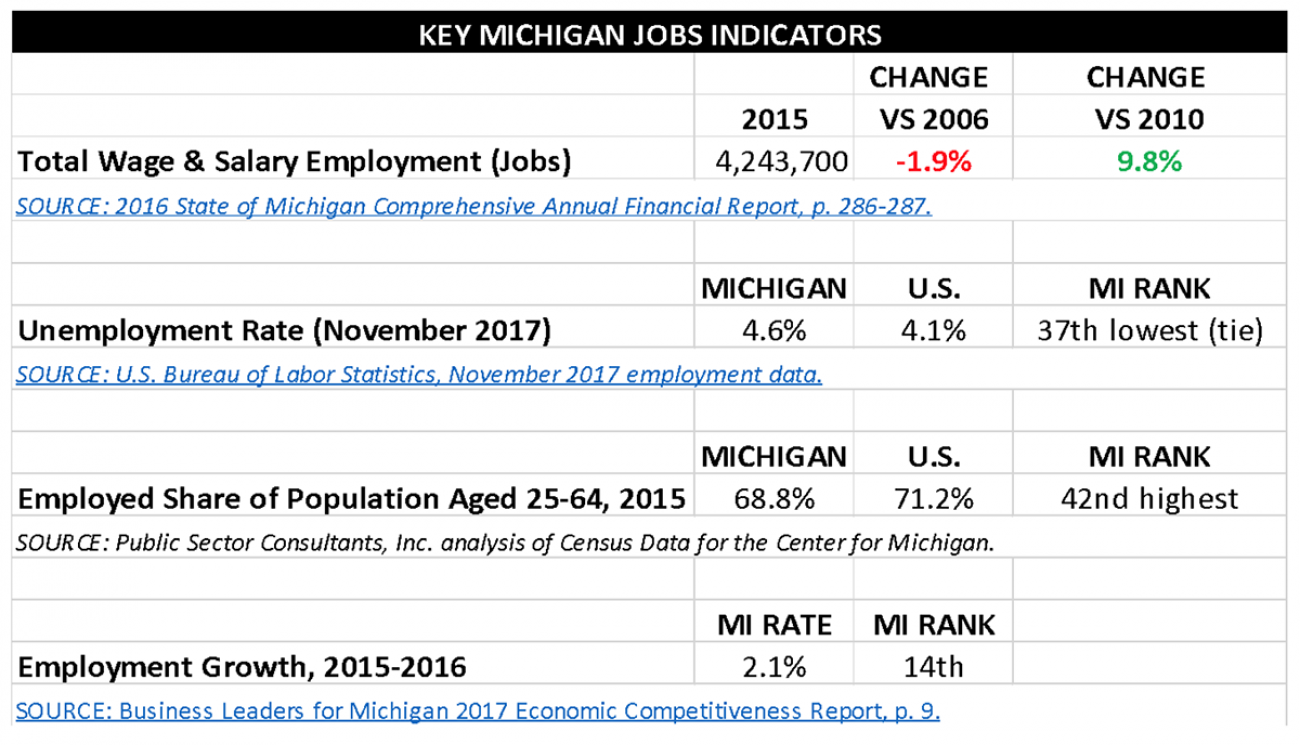 Michigan has the highest percentage of workers engaged in engineering work – good paying jobs that will be in demand as manufacturing continues to move to advanced materials and increasing automation. It has large research universities churning highly educated graduates. And Michigan is still the home to one of the largest industries – autos – in the country.

The western side of the state has done very well in terms of recent job growth. The jobless rate in Kent, Ottawa and Kalamazoo counties fell to near-historical low levels in 2017 and employers have said their biggest problem is finding workers.

In addition, the education and health services sector has added 60,000 jobs since 2008. But, in some cases (such as lower-level health-care service jobs for an aging population) growing job sectors feature considerably lower wages than Michigan’s past manufacturing glory.

The highest-paying jobs of the future almost universally require advanced training beyond high school. High-tech, growing industries of the 21st century also require deep talent pools filled by college grads. Herein lies one of the state’s problems. In Michigan, 28.3 percent of adults have a college degree. That’s well below the national average (31.3 percent). Michigan ranks 36th nationally in terms of educational attainment. Adults with a college degree can make $1 million more over a lifetime of earnings, compared to someone with a high school diploma and they experience far lower levels of unemployment. College grads’ jobless rate in 2015 was 2.7 percent, compared to 8.6 percent for those with just a high school diploma.

Another challenge is the state’s aging workforce. One in 5 workers is over 55 and far closer to retirement than a graduation ceremony. That impediment also creates opportunity: in a well-paying field like tool-and-die work, the loss of so many older specialists is creating demand. Nearly three-quarters of all tool-and-die workers are over 45.

As some regions and industries have experienced labor shortages in recent years, the problem is compounded by significant numbers of applicants who failed drug tests.

Finally, rural areas of Michigan face their own set of challenges: shrinking and aging populations, loss of young talent, empty storefronts, and a loss of business enterprises.

Given the state’s rattled labor force, it’s obvious why Michigan sought to secure the second Amazon headquarters and the prospect of 50,000 new jobs. State leaders in 2017 passed sweeping new incentives aimed at attracting high-tech, jobs-producing firms like Amazon and Foxconn (which builds Apple’s iPhone, but ultimately opted for Wisconsin for new U.S. operations).

In a proposal to help land Amazon, Gov. Rick Snyder proposed spending tens of millions of dollars on information technology (IT) scholarships and improved IT programs high schools and colleges. It’s a tacit acknowledgment that what companies like Amazon need is not currently found in Michigan’s labor force. Snyder has been talking about a “Marshall Plan for Talent,” a reference to the huge amount of money spent on rebuilding Europe after World War II.

Without more advanced training, Michigan could fall behind other nations in growing the high-tech manufacturing of the future.