Debates about Michigan land resources — and how best to use them — are as old as Michigan itself. 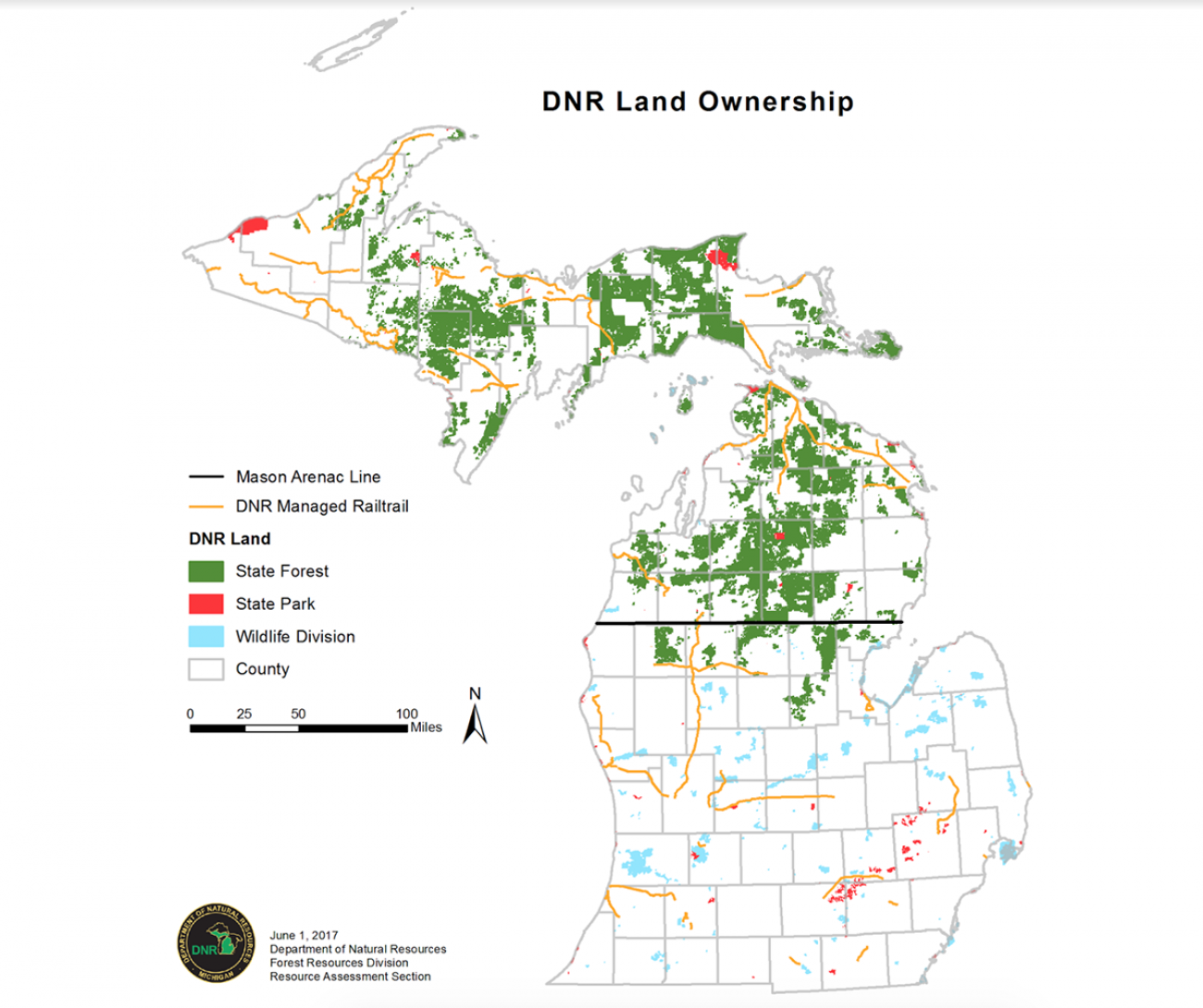 Forests cover more than half of Michigan lands, and the state has its highest forest acreage since the 1930s, according to the U.S. Forest Service. Nearly 4 percent of the state’s forest land is reserved for timber production. In 2016, 22 invasive plant species were identified in Michigan forests. Such invaders can disrupt forest ecology and harm the economy.

The state owns about 12 percent of land across Michigan

That’s more than most states, including our Midwestern peers. Of the roughly 4.5 million acres managed by the Department of Natural Resources, the vast majority — 3.87 million — are forests. Most of the remaining lands are either state wildlife areas or for parks and recreation. A 2012 law capped state land ownership at 4.626 million acres and prevented the DNR from exceeding that cap until the agency develops a land acquisition strategy that the Legislature approves.

Michigan’s Natural Resources Trust Fund, established in 1976, has proved instrumental in purchasing and developing of some of the state’s prized recreation sites. Funded by royalties collected from oil and mineral production on state-owned lands, it has pumped out more than $1 billion for such efforts. A board supervised by the Department of Natural Resources oversees the trust fund, but lawmakers in recent years have jockeyed for control of the purse strings.

Threats to hunting and conservation

Michigan typically touts one of the nation’s biggest deer harvests, eclipsed only by Texas in 2016-2017. Hunters and wildlife officials have grown alarmed about the spread of Chronic Wasting Disease — a contagious, neurological disease affecting deer and elk — within the state’s population. Were the disease to discourage hunting in the coming years, it could also threaten conservation. That’s because Department of Natural Resources wildlife programs increasingly rely on the millions of dollars generated from hunting and fishing license fees. Lawmakers have chipped in fewer general fund dollars over the years.

On grid, coal’s role is shrinking

Coal-fired power plants once dominated Michigan’s electricity portfolio, but their role is shrinking.  Aging coal plants are retiring and plants powered by abundant, cheap natural gas are increasingly taking their place. In August of 2017, coal-fired plants provided 39 percent of the state’s electricity generation, down from about 50 percent in 2014. While coal plant retirements can spur challenges to electricity reliability, they also create opportunities for cleaner-burning energy sources — like natural gas, wind and solar power — to take their place.

Some Michiganders power themselves

Through 2016, nearly 2,600 Michiganders were participating in net metering, reducing their utility bills by generating all or some of their own electricity. This has grown steadily over the years, but it accounts for just a fraction of a percentage of the state’s total retail electricity sales, according to the state Public Service Commission.

Residential electricity rates tend to be higher here than in many states. In October of 2017, residents in only 10 states paid more per kilowatt-hour on average than Michiganders did, according to U.S. Energy Information Administration data.