As the old saying goes, nothing is certain but death and taxes. In Michigan, determining how to spend the state budget – and who pays which taxes to fund such things as schools, roads, and public safety – is job one every year for the governor and 148 state legislators.

Michigan voters often hear much about taxes during state political campaigns. Some candidates are quick to promise tax cuts.  Others are equally quick in pledging more investment in public priorities. But details on whose taxes get cut or who would pay for more government investment can be very hard to come by in campaign season. 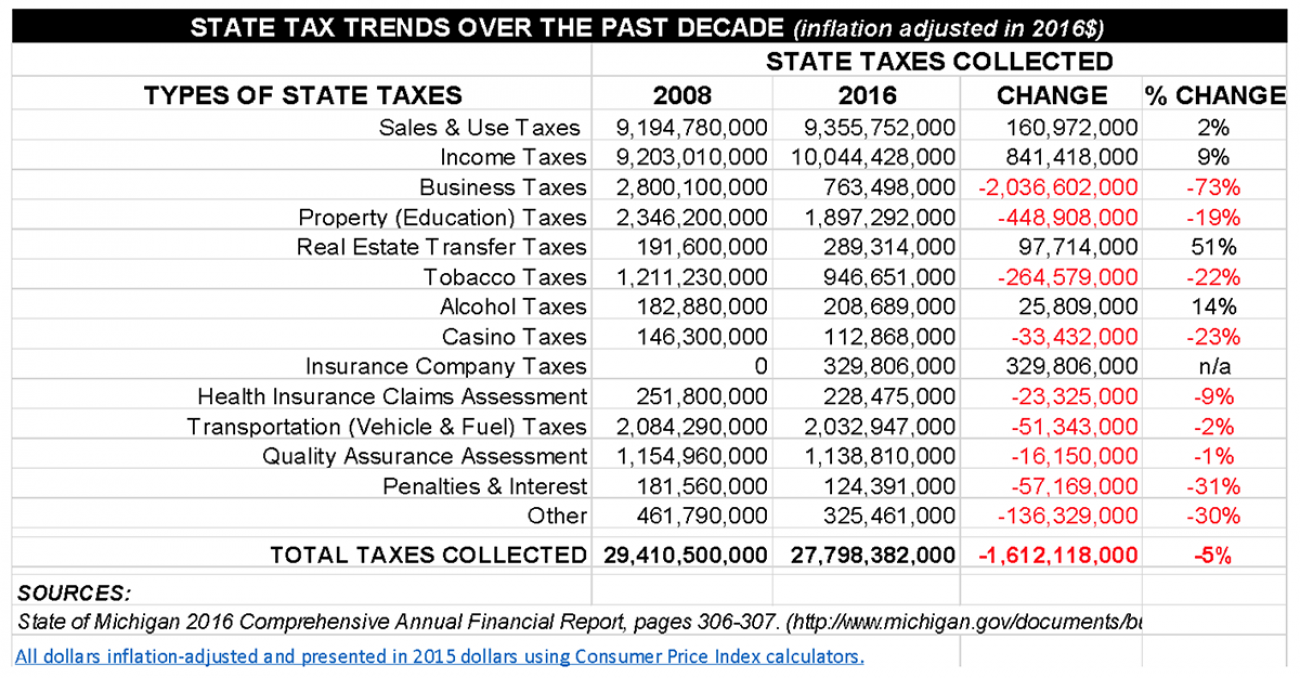 Candidates for governor and the legislature may talk a good tax game. In practice, Michigan’s elected leaders have shown marginal power to change how much they take, or put back into, your wallet. Consider income taxes. For many taxpayers, federal income taxes – set by Washington, not Lansing – take a much bigger bite than state income taxes. Federal income tax rates range from 10-40 percent of income, with higher earners paying more. The state income tax rate is 4.25 percent.  In early 2017, the Michigan Legislature debated, but did not pass, a $1.1 billion income tax cut. That plan failed, in part, because it threatened funding for schools, roads and other public priorities – and only would’ve saved the average Michigan household about $15 per month.

Compared to Other States, Michigan’s Tax Burden is Low and Getting Lower

How Competitive are Michigan Taxes?

Like most states, Michigan depends on three major types of taxes – income, property, and sales – to fund most of government. In its 2017 rankings of state tax climates, the Tax Foundation ranked Michigan 8th on corporate taxes, 14th on income taxes, 9th on sales taxes, and 25th on property taxes (with 1st being the most competitive in the country).

Everybody Loves a Tax Break – Michigan Offers Billions in Breaks

In fact, Michigan gives more tax breaks than it collects for schools and general government. Michigan offered $27.5 billion in tax breaks in 2017 – such as exemptions to state business taxes and sales tax waivers on items like food, prescription drugs, and many services (you don’t pay sales taxes for your barber or hairdresser, for example.)

If Michigan’s Tax Burden Decreased Over Time, Why Might Taxes Seem High to YOU?

Over the past several years, Michigan businesses received a collective tax cut of $5.2 billion – as the state’s elected leaders sought to improve Michigan’s business competitiveness. In turn, individual taxpayers endured a $4.7 billion tax increase through repeal of previous tax loopholes, reduction in tax credits for low-income families, and new taxes on pensions. That tax shift from business to individuals essentially amounted to a per-person tax increase of $150 per year. In addition, Michigan gasoline taxes increased 17 percent to pay for a partial road funding package approved in 2015. And, a decade ago, Michigan hiked the state income tax rate from 3.9 percent to 4.35 percent during a severe state budget crisis. (The rate dropped slightly to 4.25 percent in 2013. Finally, Michigan workers have, generally, made less money than our nationwide peers in the 21st Century. From 2000 to 2010, Michigan workers’ wages rose only 15 percent, compared to 44 percent nationally. In the past few years, Michigan employment and wages have recovered somewhat, but the not-so-distant economic trouble may still leave workers feeling less ability to pay and less tolerance for taxes.