The incomes of Michigan workers took a big hit during the Great Recession. Incomes have recovered somewhat in recent years, but Michigan has not returned to its high-wage reputation during past decades of manufacturing might.

The state’s workers once made substantially more than the average American household (6 percent more in 2000); they’re now making almost 10 percent less – or about $425 a month less. The cause: loss of nearly 300,000 manufacturing jobs, many well-paying. And the jobs that have been created have largely been in the service sector and pay just over two-thirds, on average, as what a factory job pays.

Still, Michigan incomes have started to grow again during the multi-year recovery after the Great Recession. Total statewide personal income ($424 billion) and per capita income ($42,812) in 2015 were both about 13 percent higher than in 2010. 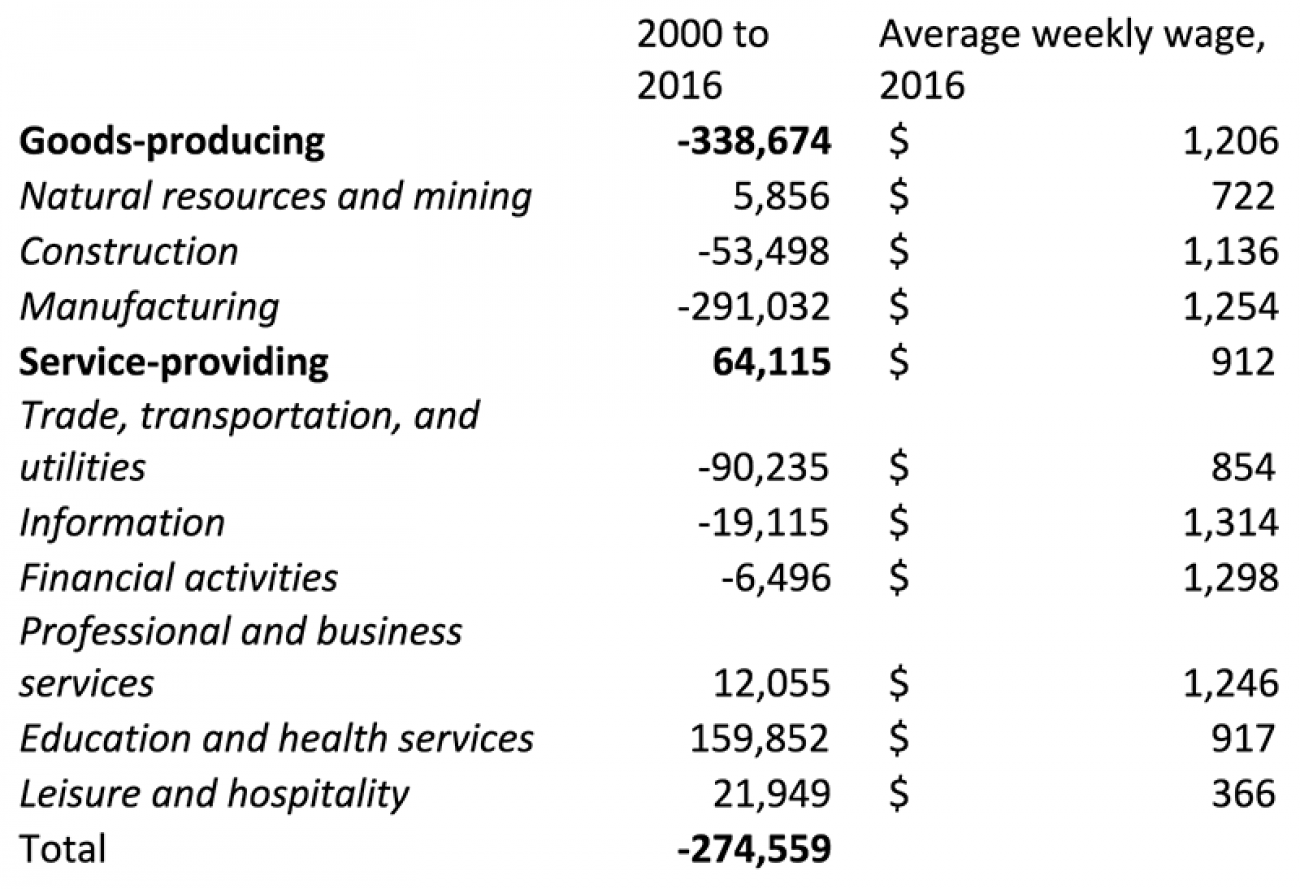 In the United States, 31.3 percent of adults have a bachelor's degree or higher, a level of education that typically brings hundreds of thousands of dollars of additional lifelong income. Michigan's rate, 28.3 percent, has it ranked in the bottom third of the country.

Rank and percent with bachelor's degree or higher

Other states with more diverse economies have been able to embrace the information age and take advantage of the higher-paying jobs in technology and financial and professional services.

Take Massachusetts and Minnesota. Both have far more educated workforces compared to Michigan and the nation. Nearly 43 percent of Massachusetts adults have a college degree, as do nearly 35 percent of adult Minnesotans. In Michigan, the number is 28.3 percent, well below the national figure of 31.3.

(For perspective: If Michigan’s had the same college grad rate as Minnesota, the state would have 439,000 more college grads; if it had Massachusetts’ rate, it’d have nearly a million more grads.)

That’s because Massachusetts and Minnesota have far fewer factory workers and more in service-oriented jobs like finance, an industry where average weekly wages in Massachusetts ($2,500) and Minnesota ($1,673) are far higher than that same sector commands in Michigan ($1,298 a week).

The impact extended beyond those working, many of whom were working for less money, to pushing many more into poverty. The poverty rate in Michigan soared from 13.2 percent in 2005 to more than 17 percent in 2011 (Massachusetts and Minnesota never climbed above 12 percent). The Michigan poverty rate remained above 16 percent in 2016.

Beyond the poor and unemployed, the working poor grew markedly. According to the United Ways of Michigan, the percentage of working families who struggled to meet the basic costs of living grew substantially. More than 950,000 Michigan households have wage earners, but are considered working poor with few assets and constrained incomes.

Across the state, the minority population was harder hit by the Great Recession. The poverty rate among African-Americans, already high, climbed to more than 36 percent in 2012. That has seen a ripple effect in a number of larger cities, including Detroit, Flint, Muskegon and Saginaw, which have larger African-American populations.