Candidate Whitmer: A right to literacy. As Michigan Guv: No need to address.

Talent & Education
Candidate Whitmer: A right to literacy. As Michigan Guv: No need to address.

On the campaign trail last year Democratic candidate for governor Gretchen Whitmer was candid and passionate, criticizing state Republican leaders for opposing a lawsuit to ensure Detroit students have a right to literacy from their schools.

“Despite what the federal court said, despite what [GOP Attorney General and then Republican governor candidate] Bill Schuette and Gov. [Rick] Snyder say, I believe every child in this state has a Constitutional right to literacy,” Whitmer told Bridge and its Detroit Journalism Cooperative media partners in 2018.

But last week, the “access to literacy” court case against the state re-emerged with Whitmer as the target now that she is governor. Instead of reversing the state’s position, a lawyer for the state sidestepped the issue in asking a federal appeals court to dismiss the case. The brief noted, and seemingly accepted, the position that no federal court has found students have a right to literacy. “This court need not address the merits of Plaintiffs’ constitutional claims,” the brief argues.

Attorney General Dana Nessel — usually a Whitmer ally — didn't sign on to the brief. That's because she intends to file an amicus brief in support of Detroit's schools, she told Bridge in an interview Wednesday, which puts her at odds with the governor.

"It's my obligation, separately as an elected leader, to represent the best interests of the citizens of this state, whatever that looks like," Nessel said. "So if I disagree, or I decide to go another way in terms of certain arguments, I have the ability to do so."

Nessel has set up a "conflict wall" that enables her to voice her support for the plaintiffs, she said.

"We're putting together the arguments right now," she said. "And I expect it's not going to be a long time until that's filed."

In its official pleading, the state repeats arguments first made under Snyder that it did not discriminate against Detroit students in its educational policies and that, because the state no longer controls the budget in Detroit’s schools, the suit’s claims are now moot and should be dismissed.

Eric Restuccia, the state’s deputy solicitor general, filed the brief on behalf of Whitmer and the state school board in the U.S. Sixth Circuit Court of Appeals last week, noting that Detroit schools are no longer controlled by a state emergency manager as they were under Snyder when the case was filed in 2016.

Restuccia also argued that attorneys for five Detroit students named in the class action lawsuit did not prove there is a constitutional right to literacy. It’s the same argument then-state Attorney General Schuette made when the Republican successfully persuaded a district court to dismiss the case.

Tiffany Brown, the governor’s spokeswoman, told Bridge that despite the state’s efforts to dismiss the suit, Whitmer’s request to increase school funding proves she believes in providing a quality public education for all students.

“The Governor’s Office has signed onto the first part of the lawsuit only, which argues that the State of Michigan is no longer a proper party to the lawsuit due to changed circumstances and the fact that local control has been restored,” Brown said in a written statement.

“The governor believes that every student deserves a quality public education. That’s why her proposed budget will make the biggest investment in public school operations in a generation of kids, including more than $22 million for Detroit Public Schools.”

Mark Rosenbaum, attorney with Public Counsel, the California-based law firm that represents the students, claims the governor’s failure to address the right to literacy in the suit is a flip-flop from what Whitmer said on the campaign trail last year and a promise broken to students from poor communities.

“Too often, as here, once votes are secured by candidates by promising to fight for these rights, the communities suffering from their denial can no longer count on those candidates to keep their word,” Rosenbaum said. 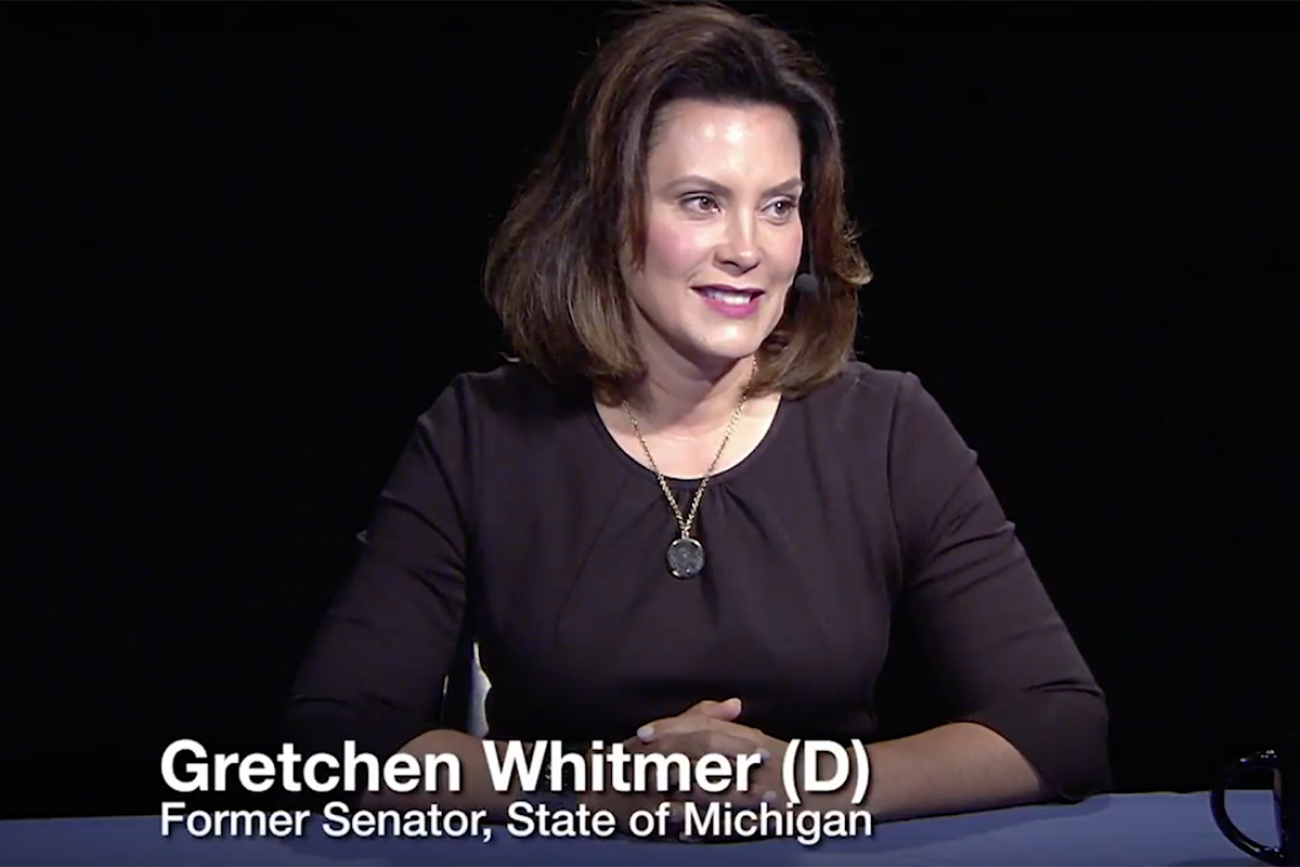 “It is of course unimaginable that the governor would break her word to the children of Grosse Pointe and Bloomfield Hills  ... As matters now stand, Gov. Whitmer is leading the court fight against the children of Detroit.”

At least one of the other defendants in the lawsuit, Pamela Pugh, the vice president for the state school board, broke ranks with the governor and released a statement saying students do have such a right.

Pugh, a Democrat, said in a written statement she is exploring how she can best express opposition to arguments the state is making on her behalf in the suit.

“I am reminded that in 1964, Rev. Dr. Martin Luther King pronounced, ‘The walling off of Negroes from equal education is part of the historical design to submerge him in second-class status.’ Dr. King went on to say, ‘As Negroes, we have struggled to be free and had to fight for the opportunity for a decent education,’” Pugh wrote.

“We owe the children of our state a decent education that includes adequate literacy skills as a core component to their training. This is an urgent matter, especially in the face of the cumulative effects of destructive policies that have derailed the educational progress of our low income children and children of color, and caused the failure of Michigan’s K-12 public education system.”

Should free be a guarantee?

In 2016, Public Counsel filed the class-action lawsuit against the state of Michigan on behalf of Detroit students in low-achieving public schools, contending that Detroit children were denied access to literacy due to state disinvestment in the schools. The lawsuit accuses the state of “separate and unequal” treatment of students in Detroit’s low-performing schools, who are mostly poor children of color.

At the center of the lawsuit is the argument that access to literacy - by way of adequate supplies and teachers - is a right under the U.S. Constitution.

Judge Stephen J. Murphy III, a federal district court judge in Michigan, last year dismissed the class-action lawsuit saying that education is important, but that the U.S. Constitution does not provide a fundamental right of access to literacy nor the right to a “minimally adequate education.” (The Michigan Constitution guarantees residents a free and public education, but it does not speak to quality.)

Murphy also noted that while the state was accountable for problems in the Detroit schools, the lawsuit didn’t prove the state had discriminated against Detroit students.

The access to literacy lawsuit was filed a year after the so-called “right to read” lawsuit filed by the American Civil Liberties Union hit a dead end in state courts.

In 2012, the ACLU filed a civil lawsuit on behalf of eight Highland Park students claiming that the state and Highland Park school system had failed in its obligation to provide students an adequate education.

The Wayne County Circuit Court initially dealt the students a victory, albeit brief, when it denied motions to dismiss the case. However, a state appeals court reversed that decision, ruling that the state Constitution “encourages” education, but does not mandate it. Then in 2015, the Michigan Supreme Court refused to hear the case, effectively ending the lawsuit’s journey through state courts.

This latest literacy lawsuit was filed in federal district court in 2016 a few months after the Republican-majority state legislature voted to reorganize Detroit’s schools. At that time, the Detroit Public Schools had accumulated more than $500 million in debt and the worst test scores on the National Assessment for Educational Progress - commonly known as the Nation’s Report Card  - while the district was under state control from 1999 to 2005 and 2009 to 2016.

The lawsuit included photographs and descriptions of overcrowded school buildings that were falling part, infested with roaches and rodents - conditions that prompted teachers to stage a walkout in 2016.

The lawsuit blamed years of low achievement in Detroit schools on what it called the state’s “deliberate indifference” to the city’s students. Detroit’s public school system ranked last among 27 of the nation’s large cities on the Nation’s Report Card reading tests in 2017 - for the fifth consecutive time.

The state’s low student achievement is not lost on Whitmer, according to Brown, her spokeswoman.

Recognizing that statewide students in Michigan rank among the bottom 10 states in the nation in fourth-grade reading scores, Whitmer has identified literacy as a key education problem she wants to address.

That money would increase the number of literacy coaches in the state from 93 to 279 for the 550 school districts and 300 charter schools in Michigan. Under the proposed budget, the state would pick up the full tab for those coaches, instead of the current system in which local districts pay half the cost.

If the federal appeals court dismisses the Detroit literacy lawsuit, the next step could be an appeal to the U.S. Supreme Court, which has discretion as to whether it will hear the case.

David Hinojosa, an attorney at a New Mexico-based law firm who works nationally in civil rights and education, said that while he believes quality education is a constitutional right, it could be decades before that notion is upheld in federal court.

“Supreme Court justices, with the way they think and the way they want to rule on these cases … that’s the biggest challenge. Is now the time to take this issue up to the Supreme Court? I emphatically have stated no.”