It is a small desk — short and triangular, with a wood top and gray legs. It arrived Thursday by moving truck to a ranch home in Novi, where it was immediately latched on to by first-grader Lars Crawford.

Six-year-old Lars has been learning at home since August, studying at a computer screen with a teddy bear propped atop it. Typically he’s worked at a makeshift desk in his parents’ bedroom, waiting for the day when his parents, Maureen and Michael Crawford, think it’s safe for him to return to a classroom at Village Oaks Elementary.

Two months into a school year shaped by a global pandemic, schools and families are still struggling to find a balance between safety and education. There is no statewide count of families whose children are learning from home, either by choice or because their school districts are fully remote.

Likewise, there’s no official tally of how many school buildings remain closed because of concerns over spread of the coronavirus. It’s a moving target, with some districts reopening in recent weeks, some taking steps toward possible re-closure, and still others announcing plans to stay closed through at least mid-January.

That leaves school officials and families like the Crawfords to analyze sometimes contradictory sets of information.

Some studies now suggest that schools, with strict safety protocols not always followed at outside-school social gatherings, do not contribute to the spread of COVID-19.

But confirmed cases are skyrocketing among Michigan’s general public. Just Thursday, the state’s chief medical officer recommended that Thanksgiving gatherings be limited to two family units, and even then, face masks should be taken off only when eating or drinking.

Meanwhile, outbreaks in Michigan K-12 schools jumped more than 25 percent in a week, in a state report released Monday, with new or ongoing outbreaks in 126 schools, and 606 confirmed cases.

In Novi, where families have had the choice between at-home learning or a hybrid classroom/homebound model since September, the movement of desks from shuttered classrooms to students’ homes shows “the uncertainty” of the pandemic, Michael Crawford said, whispering in the phone as Lars, barefoot and wearing a Nike sweatshirt, focused on online classwork at his new desk.

Bringing a school desk to their home is “trying to make a tricky situation a little better.” 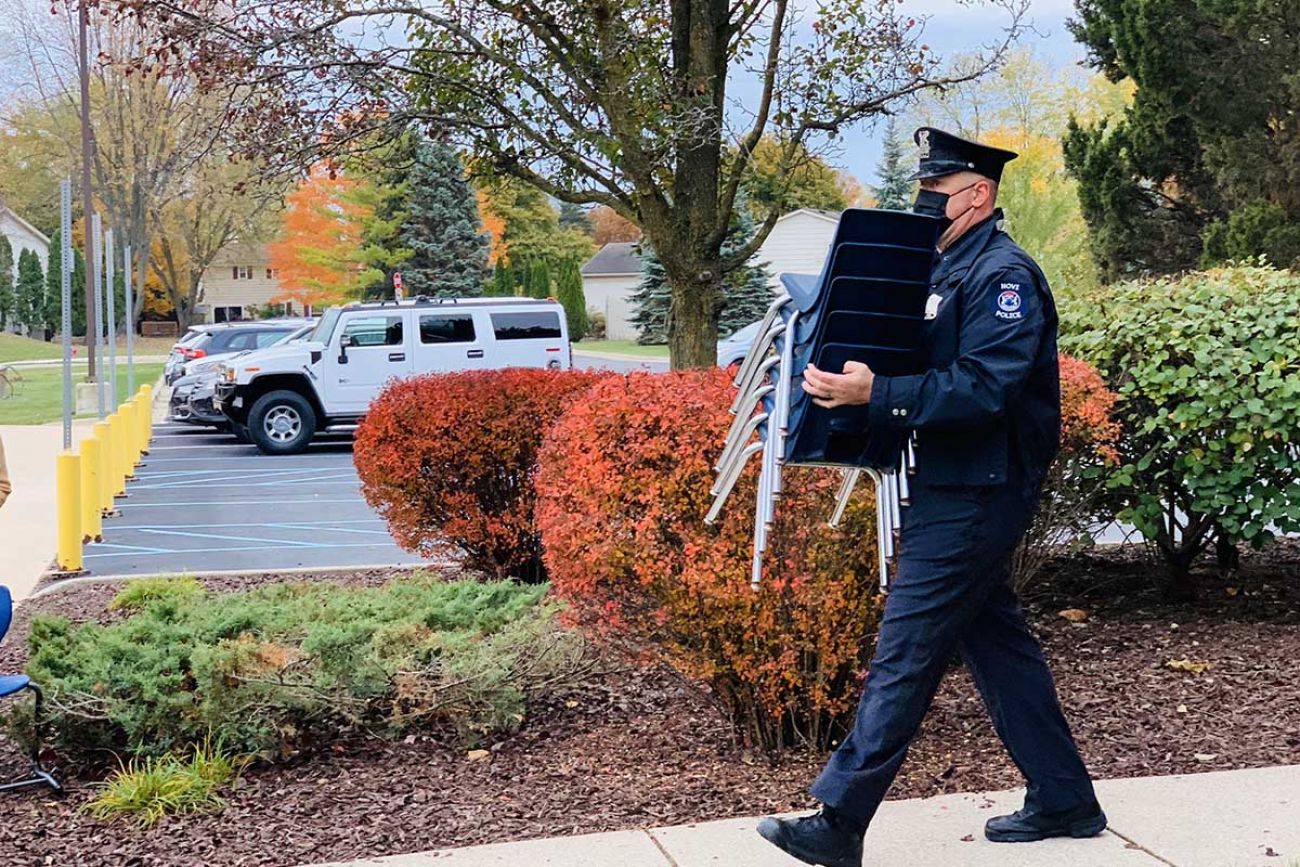 Like many governors, Michigan Gov. Gretchen Whitmer ordered public and private K-12 school buildings closed in mid-March as the state scrambled to control the spread of the coronavirus. Schools switched overnight to homebound learning — online classes, printed packets or a combination of the two.

As the new school year began this fall, local districts were given the authority to decide what level of in-school instruction to offer, based on infection levels in their communities. Most districts offered a choice of full online learning, or the option of at least some days each week in a classroom. For schools that were open, students in grades 6 and above were required by the state to wear face masks, along with all staff. Cleaning was increased. In some cases, students ate in their classrooms to limit contact with others.

When a student or staff member tested positive for COVID-19, those who had close contact with the infected person were ordered to quarantine at home. Many school buildings have closed temporarily when an outbreak occurred.

Those plans, set by the state and local health officials, have by and large been effective in limiting coronavirus spread in schools. While the number of outbreaks in Michigan school buildings continues to rise, most outbreaks have been limited to single digits.

Michigan does not tally a case-per-100,000 rate for schools, but a national survey of more than 5,000 schools conducted by Brown University found that, through Oct. 25, students nationally had a daily positive test rate of 6 per 100,000, and staff a rate of 12 per 100,000. That’s less than half the seven-day average for the general population of Michigan, which was 33 cases per 100,000 on Monday.

The U.S. Centers for Disease Control considers anything above eight cases per 100,000 to be high.

A Washington Post survey in October found that, among the nation’s 50 largest school districts, 35 had resumed in-person classes or planned to do so in the near future. One of those districts, Washington, D.C., on Monday reversed a plan to return students to classrooms Nov. 9, instead choosing to remain fully virtual for the immediate future.

In Michigan, some school districts that started the year fully online have reopened classrooms or announced plans to do so. Plymouth-Canton Community Schools brought elementary students back for two days a week in mid-October, but delayed the return of older students until late January because of safety concerns.

“Student and school safety is a community effort,” Plymouth-Canton Superintendent Monica Merritt wrote to families. “We know that in-person classes are the best way for our students to learn, and benefit students’ social, emotional and academic growth, and we are doing all we can to keep our school buildings open and safe for students and staff. However, we can only control the mitigation practices and safety measures in place in our school buildings. We rely on our entire school community to work together to prevent the spread.”

Five districts in Ingham County (Lansing, East Lansing, Haslett, Okemos and Waverly) are bringing students back to classrooms for the first time in January, according to Ingham Intermediate School Superintendent Jason Mellema.

Grand Rapids Public Schools had planned to bring students back to classrooms Oct. 26, but pushed the return back to January because of rising COVID cases in Kent County.

“The reality is the data is headed in the wrong direction for Kent County and the back and forth with potential closings will be more disruptive than just staying virtual now,” Grand Rapids Superintendent Leadriane Roby wrote to families.

With coronavirus cases rising rapidly in West Michigan, 46 school superintendents in Kent, Ottawa and Muskegon counties signed a joint letter to their communities Oct. 19, warning that if cases continued to surge, they may have to switch back to fully remote learning.

A desk as ‘normalcy’

Novi, in suburban Oakland County, has so far taken a wait-and-see approach. About 55 percent of Novi’s 6,700 students are learning from home, said R.J. Webber, assistant superintendent for academics in the district, with the rest opting to attend classrooms two days a week, and learn from home three days.

“There’s a contingent of parents who would like to see us go [to in-school classes] five days a week,” Webber said, “but with COVID numbers going back up, It’s not something we’re particularly keen on.”

The seven-day average of new daily cases in Michigan was 3,283 on Monday double the average of just two weeks earlier. Hospitalizations have almost tripled in a month, to 1,966 on Monday, compared to 676 on Sept. 30.

Those rising rates led West Bloomfield School District, just 11 miles from Novi, to announce Monday that it is closing its buildings until Nov. 30. In a letter to parents, West Bloomfield Superintendent Gerald Hill noted that the Oakland County Health Department had raised the county’s COVID risk to its highest level short of the health department ordering schools closed.

Webber said Novi isn’t currently considering adjusting its schedule until the end of the first semester, in late January.

“We want to be back” to full-time, in-person instruction, Webber said, “but there are barriers to going full-on.”

The biggest barrier is social distancing if all students are back in classrooms, and the time needed for additional cleaning, Webber said. Many Novi families have indicated they plan to continue with remote learning until a vaccine is developed, Webber said.

There’s no perfect solution. “With the hybrid (schedule), the hard part is the lack of continuity with different classes on different days,” Webber said. And on the days students are learning from home, “I’m hearing [from teachers] how difficult it is to teach the way they want to teach.”

There are pros and cons to any plan made during the pandemic, Webber said. With remote or partially-remote education, learning is more of a challenge; with full-day learning, safety could be compromised. “We can do anything,” Webber said, “it’s just what price you’re willing to pay.”

With no schedule changes expected in the near future, Novi officials offered to move school desks out of unused classrooms to student homes last week. About two hundred families said yes.

Like the school district his son attends, Michael Crawford is uncertain what the rest of the school year will look like.

Lars is enjoying his online classes, his father said, possibly less bothered by not having contact with classmates than older children because he was only in a classroom for 5 ½ months as a kindergartner before COVID shut it down.

“We’re in a wild situation,” Michael Crawford said. “The desk, in an actual and symbolic way, provides a sense of stability, a calm in the storm.

“A school desk is a symbol of learning, of schools,” he said. “This is something that represents a state of normalcy that is not present in the outside world.” 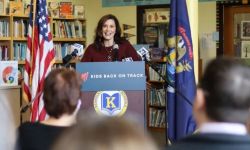