One hired a nanny. Another bought wine. And a third confessed the television would be the baby sitter when he’s in video conference meetings.

With Michigan’s schools closed for the next three weeks starting Monday, parents are scrambling to adjust lives and livelihoods to the pandemic.

Gov. Gretchen Whitmer has ordered all K-12 schools closed until at least April 6 to slow the spread of the coronavirus. Michigan is one of 12 states that have closed schools.

Parents who spoke to Bridge Magazine agreed with Whitmer’s decision, but acknowledged that didn’t make adjusting to three weeks of child care any easier.

Hoping to ‘not kill each other’

Courtney Snede was in a Sterling Heights grocery store stocking up on supplies for the three-week school closing when she received a call from a reporter.

Snede and her husband live in the same house with their twin, 9-year-old boys, and her 94-year-old grandmother with health conditions.

Both Snede, who works for a Troy tech company, and her husband, Peter Snede, a white-collar worker at General Motors Corp., were told to work from home for the time being.

“Looks like we’re all going to be home and figure out how to do my job, teach them and have them not kill each other,” Snede said.

Evan and Ethan’s school in Utica is offering online instruction. But Snede is not sure the Internet at their home has the bandwidth to support her sons working online while she and her husband are online trying to keep up with their jobs.

“And we don’t have enough [computer devices],” Snede said. “We have one room in the house that someone could have a conversation in and not be interrupted. Now it has to be shared with my kids talking to their teachers and me talking to my boss. We’re going to have conference calls where everyone has kids screaming in the background.

“I feel really bad for parents who have jobs that don’t allow them to stay home,” Snede said. “But l’m thrilled the governor hopped on this. If I’m inconvenienced for a few weeks, it’s worth it in the long run.”

When she learned that the governor had shut down Michigan’s schools Friday, Nicole Hudson of Royal Oak pulled her 19-month-old daughter out of a child care center and hired a nanny. Her daughter has had respiratory issues in the past, and Hudson has parents and grandparents who are considered high risk of getting the coronavirus.

Hudson approaches the school shutdown like she does her marketing and communications work, with bullet-point lists and quick decision-making.

“I have a friend who is a child psychologist, and she said don’t panic, don’t leave our kids with a lasting sense of insecurity,” Hudson said. “Be positive and give your kids the feeling of control and being survivors.” 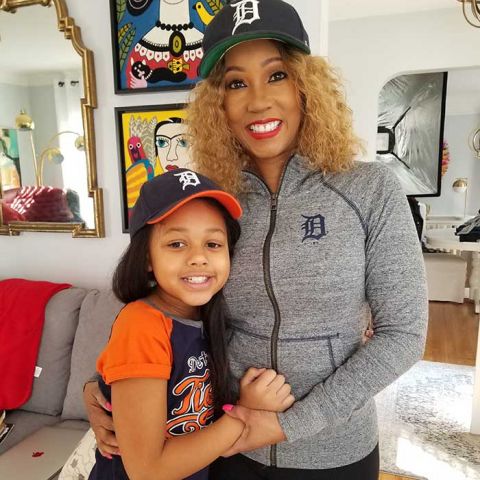 Over the weekend, the family was developing new cleaning and exposure protocols with the nanny and house cleaner. They considered the pros and cons of offering child care to other families.

“We believe daycares are going to shut down either from the state level or from lack of revenue,” Hudson said.

Many families have to continue to pay their child care centers to preserve their spot even if they temporarily pull their kids because of coronavirus concerns, or if the center closes because of the pandemic.

That leaves most low- and middle-income families with little economic wiggle room to pay for child care during the school closure.

“We have the means to do this, but probably 50 to 70 percent of the moms I know are scrambling” to find child care, Hudson said.

Alison Vaughn is one of the Michigan moms still scrambling. The single mother from West Bloomfield Township has an 8-year-old in third grade, a job she can’t miss, and no money for child care.

“I’m trying to see if my mom can help,” Vaughn said. “But she’s high-risk. I have a cousin, but she lives 25 minutes away in traffic. When option A doesn’t work, you have to find B, C and D.”

Vaughn’s last option: take daughter Sarah to her office, where Vaughn is employed in workforce development. “I’d just need to bring some books and she’ll sit there with me,” Vaughn said.

“I definitely think it was the right thing for the governor to shut everything down, but, the other side of the coin is, for working moms, there’s a huge impact. Who has cash sitting around for extra child care?

‘A damn punch in the face’

Lisa Bailey of Detroit has two daughters, age 10 and 6, who will be home for three weeks. She also has a job that she can’t miss if she wants to get paid.

Bailey is a clerical worker for the state of Michigan. In her position, she has paid sick days, but she used them up after the recent birth of a third child.

“They told me I could stay home, but I wouldn’t get paid, Bailey said. “I have no idea what I’m going to do.”

Bailey’s infant daughter is in child care, and whether the baby  attends the center or not over the next three weeks, Bailey must continue to pay about $200 a week.

“Not everyone is fortunate enough to have relatives who can help,” Bailey said. “My parents are deceased and my siblings work or are out of state.

“The state shut down the schools, but the state (her employer) won’t let me take off. This isn’t my fault, you know what I mean? I didn’t ask for this. Three weeks? That’s  a damn punch in the face.”

What is she going to do?

“I happened to already have Monday off for an orthodontics appointment,” Bailey said. “Tuesday? I have no idea.

‘You just try to figure it out’

In Mount Pleasant, Matt and Erica Johnson spent Friday evening looking at their work schedules, trying to figure out how to alternate child care duty.

Both work at Central Michigan University, so they also have been told to avoid their workplace. But their jobs continue online, making the care of their 5-year-old son and 2-year-old daughter for the next three weeks a logistical challenge.

The school where their son is a kindergartner closed, as did the child care center their daughter attends.

“I teach face to face Tuesday-Thursday, and I’m transitioning that online,” said Matt Johnson, an associate professor of educational leadership at CMU. “[Erica] is going to [be with the kids] Tuesday and Thursday and I’ll be in the basement, grading papers, holding classes and office hours.

“She’ll do remote work early in morning, during nap time, after the kids go to bed. And then do the same thing Monday, Wednesday and Friday.”

Their kindergartner came home from school with an inch-thick packet of worksheets, along with a username and password for a free online phonics instruction website.

“The next logical question is, when are you going to do this stuff?” Matt Johnson said. “It’s like we’ve transitioned into a quasi-homeschooling. But If you’re not homeschooling because you work, how are you supposed to do it now?”

Johnson said the family would check out the materials sent home in his son’s backpack, but admits “a lot of what we’ll be doing is just keeping the peace and keeping people entertained.

“Our kids aren’t great self-entertainers. And our main sources of entertainment, The Jump Station (a trampoline play center) and the Mt. Pleasant Discovery Museum, we can’t go to either of those … nobody’s going to that sort of stuff now.”

Johnson said he knows there will be days in the next three weeks where the TV and videogames will become the baby sitter.

“I’ve got a dissertation defense online. We’ve both got committee meetings. It’s going to be some videogames [for the kids],” he said. “We’re not sure what we’re going to do.

Johnson laughed. “What can you do? You just try to figure it out.”