At Hillsdale library, resignations and alarms about politics, pedophilia

More than 60 people showed up for a library board meeting in Hillsdale Thursday evening. Community members spent more than hours debating whether library books about race, LGBTQ or political issues should be available to children and teens. Not that those decisions were even on the evening’s agenda. (Bridge photo by Isabel Lohman)
May 27, 2022
Isabel Lohman (Email)
Talent & Education

HILLSDALE—Hillsdale Community Library will not be removing any books that a board member and some local residents have raised concerns about.

But at a crowded, at times raucous, meeting Thursday evening, board members and residents spent hours arguing the merits of giving children access to books on political, LGBTQ, religious or sexual topics. One speaker who identified himself as a pastor warned such material could be a gateway to allowing children’s books on beastiality or pedophilia.

“We have been asleep at the wheel for decades,” said another speaker, who said his name is Matt. “For too long now…anti-American and sexualization of our youth have been infused into our society, including schools, media, libraries and other institutions by a bureaucracy and administrative state that is hostile to America and hostile to the principles of the West: Christianity and the traditional family.”

Other speakers, including two library officials — one who will resign and one who may — as well as a teacher, pushed back on eliminating broad categories of books from the children’s section, citing the need for students to recover from learning loss during the pandemic and the duty of libraries to carry a diverse collection of material.

The children’s section librarian, Lauren Jones, gave a tearful speech about how the library is a safe haven for many children. She said recent disputes over books have hurt the library’s reputation. 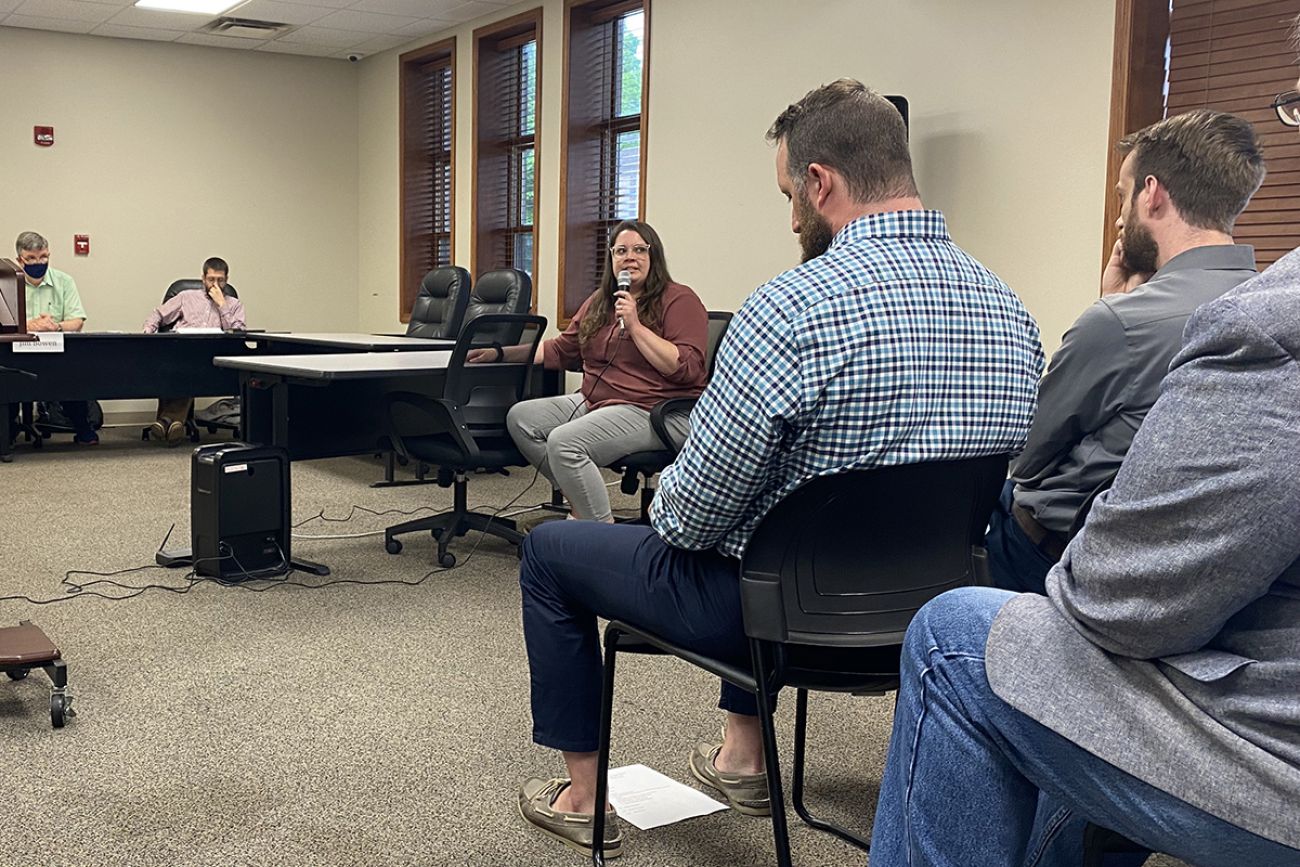 “We should all feel welcome here,” Jones told the crowd of more than 60 people.

“I, too, am a Christian,” she said. “I love the Lord. I want to love everyone as He loves us. That's my belief. It’s not the board’s, it’s not the library’s. And I have to put all of my personal things aside when it comes to doing my jobs. And I hope that we can all do that. Nothing I do is to incite this” (kind of controversy).

Jones previously announced her resignation but said Thursday night she wasn’t yet sure if she would leave.

Board member Joshua Paladino advocated last week for a policy that would have stopped the library from purchasing books for the children’s section that dealt with political or LGBTQ topics. In an email to supporters, he claimed the library director was filling the shelves with “CRT, LGBT, & sexually promiscuous books and displays.” 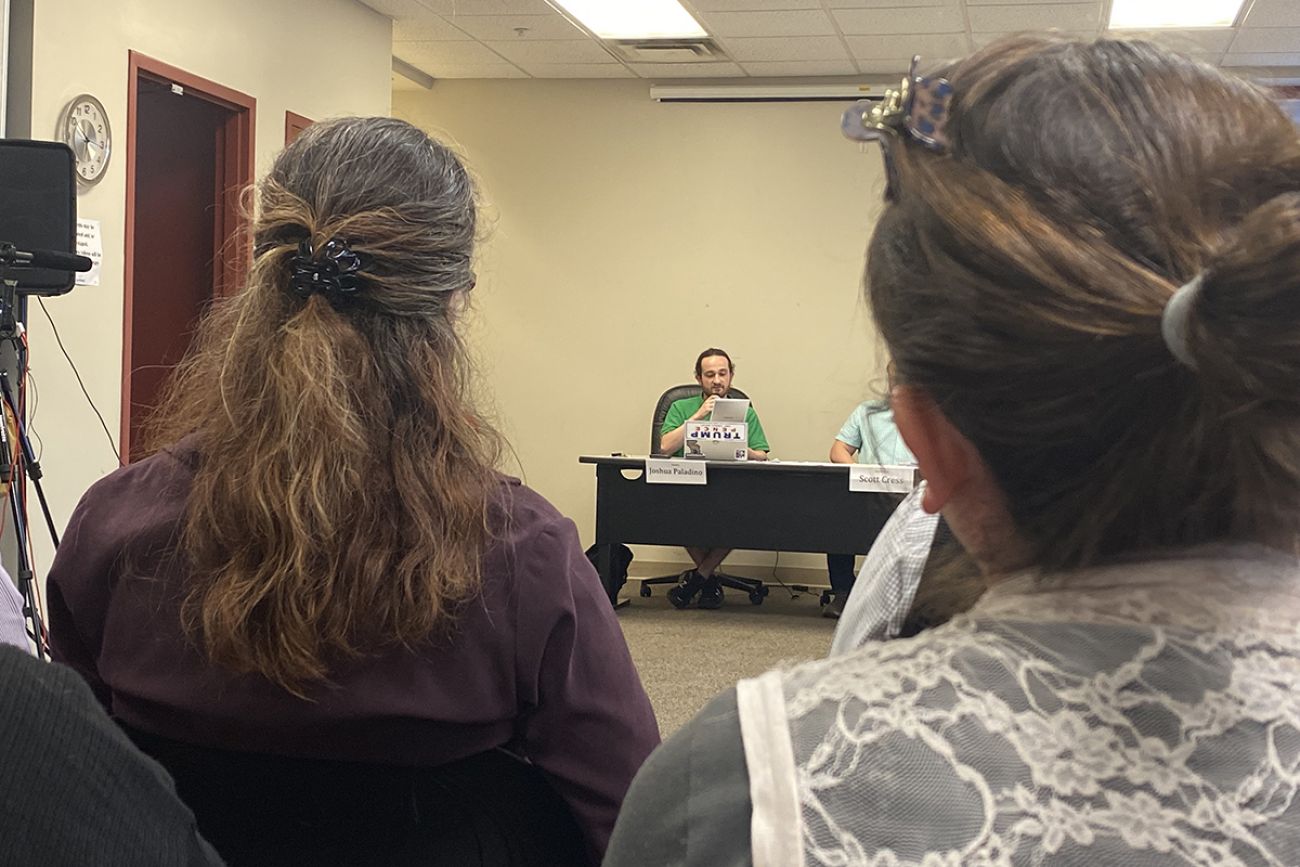 Joshua Paladino is a member of the five-person HIllsdale Community Library Board. He wants the library to avoid purchasing books about several topics including those that “glorify or normalize gender dysphoria” and those that touch on political movements like Black Lives Matter. (Bridge photo by Isabel Lohman)

Paladino’s suggested amendment would forbid the library from purchasing books for people under age 18 that discuss “sexually explicit themes” including sexual abuse, sexual identity and gender identity. He also would ban materials that “glorify or normalize gender dysphoria,” but he  would allow books that help “children fight against feelings of gender dysphoria and feel comfortable in their own bodies.”

The proposal would also require new materials to be nonpartisan and apolitical and not refer to “contemporary political movements, including but not limited to Black Lives Matter, LGBTQIA+, Critical Race Theory, and QAnon.”

The five-member board decided against a recommendation that would remove Paladino from the board. But the library’s director, Bryonna Barton, read her resignation letter at the meeting, citing the continuing controversy.

Barton defended her staff and noted that even in the children’s section books are separated by those for the youngest children, those for kids 7 to 15 and a third section for high school-age students.

She noted the library has 166 books with LGBTQ topics or characters, and more than 1,700 books that fall under the subject search “Christianity.” Barton said she’s added labels to books with LGBTQ or Christian topics because she knows they can be “controversial.”

Paladino, meanwhile, defended his actions and said he drew a difference between curation and censorship. He said he isn’t intending to ban books, but instead be proactive about how the library makes decisions about new books.

Board President Scott Cress agreed that the controversy officially before the board was about what books to add in the future, not banning existing titles.

“Not only are books not leaving the shelf…at no point, in the last month has actually the board been presented with a particular book with the option to remove it,” Cress told Bridge Michigan.

The board decided last week it would create a subcommittee to help create standards addressing policy changes, Cress said. He said he thinks the deadline would be around July but that could change.

The meeting lasted more than three hours with shouting from community members at different times, a 25-minute speech by Paladino and multiple references to a perceived lack of transparency by the library board.

“We all know about COVID, we know that the schools were affected and more than ever, we need that summer reading program for kids,” teacher Debra Brown said. “We’re already behind. We can't afford to let our kids get any farther behind.”

Kathryn Watkins, a Hillsdale Township resident, said Hillsdale should not be “a playground” for people to play “their political games.”

“Real people and families of diverse backgrounds, values, sexual orientations and races exists in this community, whether you like it or not,” Watkins said. “And I know that I'm not alone when I say that I will do whatever I can to stand up against the injustice and bigotry against them. I am an ally and I will never apologize for that.”

Others called for the board to work together and encouraged the director and children’s director to stay.

Cress, the board president, told Bridge that since joining the board a year ago, the number of public visitors had hovered between “zero to two.”

“We’ve never had to deal with anything like that,” Cress said. “So our mechanism for doing things is inadequate to conversations like this. That’s why it’s so chaotic.”

“We don’t have a children’s selection policy,” he told Bridge. “This will likely take months and it probably should.”