Michigan Republicans pitch student grants up to $1,500 for learning loss

Some Republicans lawmakers want to help Michigan students recover from pandemic related learning loss by creating a grant program where individual students could get up to $1,500 for tutoring, software, before and after school programs, day camps or other education support.

If the measures are approved, the state treasury department would hire a company to administer the program by managing a “marketplace” of education vendors. Once students are approved to receive grant money, they can select a service and must use the grant within 12 months.

Alexander, a former teacher, said she would like to use federal COVID-19 relief money to pay for the program and said her bill allows “putting the money in the hands of parents to make those decisions for their kids.” She testified at both education committee meetings Tuesday.

She said the bill is a way to help parents while also helping teachers by giving students access to more adults to help them with learning.

Republican lawmakers have zeroed in on increasing parental involvement and oversight in schools recently. Lawmakers have discussed a school transparency bill that would require districts to post curriculum and other information by the first day of school and, last week, the Michigan Senate approved a nonbinding resolution affirming “the fundamental rights of parents to direct” their children’s education.

If the program is approved, students who have been in a public school, charter school or private school in Michigan for at least two semesters between March 9, 2020 and June 1, 2022 would be eligible to receive a grant. There would be at least three rounds of funding.

The student would need to provide family income information. The bills aim to have at least 40 percent of money distributed in each funding round awarded to students in families living at or below the federal poverty line.

The program would also require a “learning retention score” which would factor the student’s household poverty and the number of days where an applicant’s school did not offer in-person learning.

Peter Spadafore, executive director of the Middle Cities Education Association, a consortium of urban school districts, told Bridge Michigan he does not think the proposal “is soup yet ー in terms of a bill that will solve problems.”

“We are open to a lot of conversations and discussions about how we can deploy resources to help students with the greatest educational needs. But the original bill was a half a billion dollars with very little oversight to make sure it's spent properly or going to quality programming.”

The House Fiscal Agency analyzed the house bill substitute and found that any funding for the program would be subject to legislative appropriations and that the bill provides no specific revenue source for the programming.

Alexander said this bill is modeled after programming in other states. Her office provided a list of five states that have something similar including Arizona, Idaho, Kansas, Ohio, and Oklahoma.

Both Alexander and Bizon, the sponsor of the Senate bill, emphasized that the grant money could not be used to pay for tuition for private schools, a controversial issue that Michigan voters have rejected in the past.

Alexander was not able to specify how many hours of tutoring she believes would be needed to get students to grade level but said any amount of additional support for students could be helpful.

Sen. Dayna Polehanki, D-Livonia and a former public school teacher, said she is concerned that if the federal COVID-19 education dollars are already absorbed in the state aid budget, then that would be a state constitutional problem.

Sen. Erika Geiss, D-Taylor, said she is worried that this type of program could leave some students behind.

“Why aren't we looking at ways to infuse into the School Aid fund the ability for districts to do this without having to go through a private source,” she asked Alexander.

The Michigan Department of Education opposed the original bills based on cards submitted in opposition in both the house and senate committee meetings. 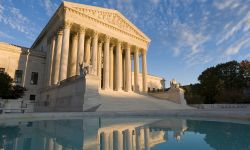 What the Supreme Court school prayer decision will mean for Michigan