Community college will be free for some Michigan residents but not for others, under the guidelines for a highly anticipated program announced Tuesday by Gov. Gretchen Whitmer.

Michigan Reconnect promises free tuition and mandatory fees at the state’s community colleges and many professional training centers for residents ages 25 and older. The $30-million program was lauded by Whitmer as a huge step forward to increase college attainment in the state.

But for 1-in-5 residents who otherwise meet the program’s requirements, community college still won’t be free.

In fact, residents in all or part of 50 of the state’s 83 counties — representing half the geographic area of the state — won’t qualify for the full benefit of the program. That includes regions whose residents could use the most help paying college tuition.

Under the guidelines of the program, approved by the Legislature and signed by Whitmer, residents aged 25 and older can attend community college tuition-free, but only at the campus within their community college district.

The problem: about 20 percent of state residents don’t live in a community college district. 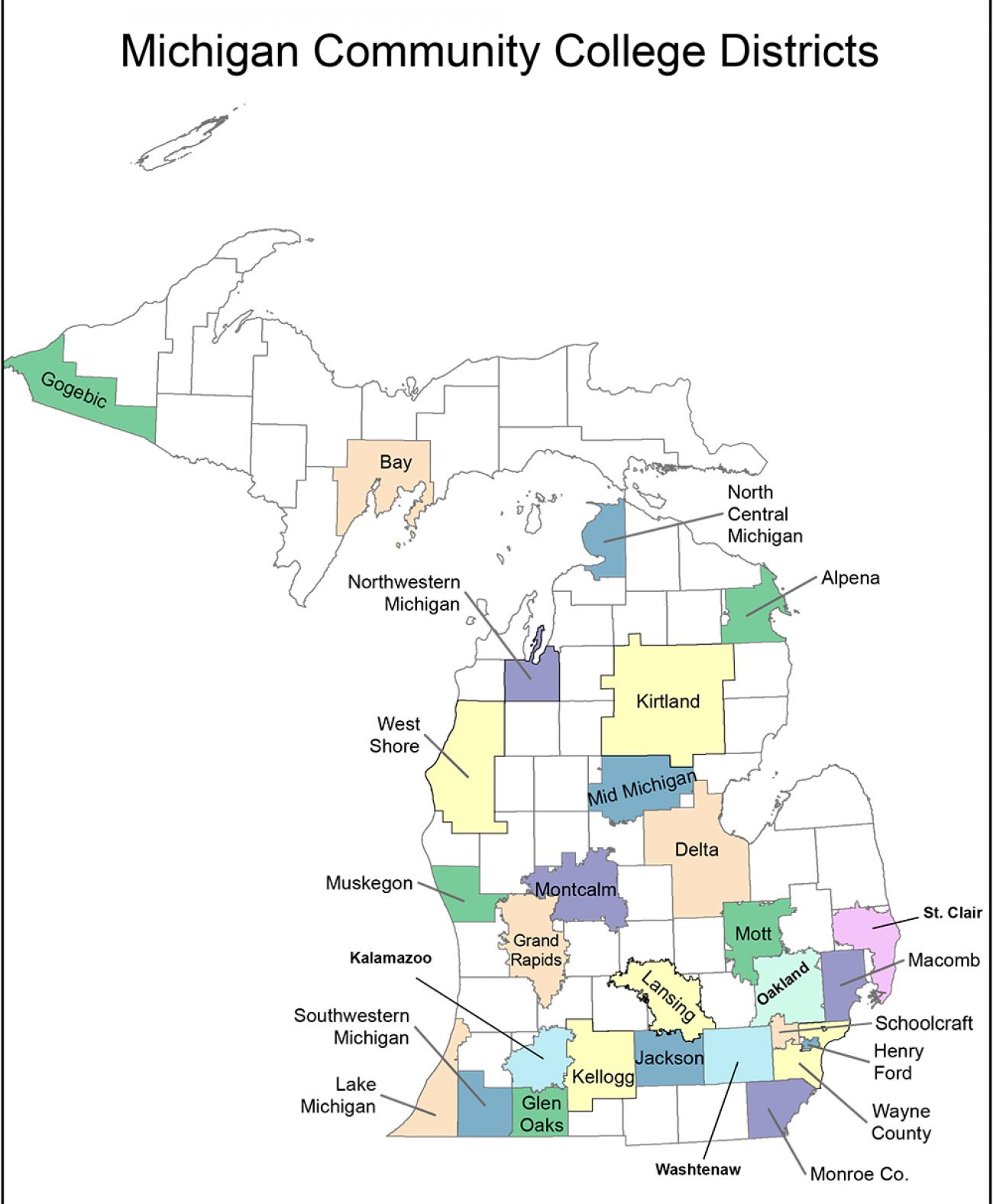 Those residents can attend community college for a discount under the Michigan Reconnect program — typically about half price — but not for free.

The same geographic restrictions apply to the Futures for Frontliners program, which provided free community college to essential workers who worked during the lockdown in the spring.

Most of the counties not getting the full benefit of Michigan Reconnect are in rural northern Michigan, and many of them are low-income.

Alyssa Merton is coordinator of the Local College Access Network in Oceana County in west Michigan, where about 17 percent of adults have a bachelor’s degree or higher, below the state average of 28 percent. Both Muskegon County to the south and Mason County to the north are in community college districts, but Oceana, where 23 percent of children live in poverty and 40 percent come from families where no one has attended college, is not.

“Our entire focus is to increase educational attainment in our community,” Merton said. “We’re grateful for this program, but it’s frustrating because we can’t market Reconnect or Future for Frontliners the same way as they can in other parts of the state because it doesn’t provide the same benefits” to Oceana residents.

Merton said she’s had difficult conversations with residents who had heard news reports that they could attend community college for free.

Michigan’s community colleges receive much of their funding from local taxes, and offer lower tuition rates for students who live in the areas that pay those taxes.

Out-of-district students who apply for and are accepted to the Michigan Reconnect program will have an amount equal to the in-district tuition paid for by state or federal scholarships, but must still pay the difference between the in-district and out-of-district rates. In the case of LCC, those students would pay a net $111 per credit hour, rather than the $222 without the program.

At LCC, 4,127 enrolled students (40 percent) are out-of-district, meaning they wouldn’t get free tuition if they otherwise qualified for Michigan Reconnect.

While a step in the right direction, Ryan Fewins-Bliss, executive director of the Michigan College Access Network, said giving free college to some and not to others across the state raises equity issues.

“Ultimately, to provide a pathway for everyone, it needs to provide 100-percent (coverage),” Fewins-Bliss said.

Michigan Reconnect is a “signature accomplishment” of the Whitmer administration, Whitmer spokesperson Robert Leddy told Bridge Michigan in an email Monday. It is viewed by education and business leaders alike as a key to increasing college attainment in the state, which is key to boosting Michigan’s economy.

One in four Michigan adults have some college credits but no degree. Making community college free could entice more adults who keep putting off finishing a degree to return to campus.

Yet many counties with low college completion rates aren’t eligible for the full, free-community college benefit of the new program.

For example, residents in most of Lake County, with the state’s lowest percentage of adults with a bachelor’s degree (9 percent), are not eligible for free community college. Neither are Arenac (11.4 percent) or Montmorency (11.8 percent) counties. For Michigan as a whole, 28 percent of residents age 25 and older have a bachelor’s degree or higher; in the U.S. the rate is 31 percent.

Erica Quealy, spokesperson for the state Department of Labor and Economic Development, defended the difference in benefits among communities.

“It wouldn’t be fair to provide the same benefit to people who live in communities that don’t support community college through their property taxes, as is provided to those who do,” Quealy said.

Leddy, the Whitmer spokesperson, told Bridge on Wednesday the governor is proud of the programs and encourages "local leaders to explore possibilities of joining a (community college) district, so that all residents have access to a tuition-free path to an associate degree."

One lawmaker involved in creating the guidelines for Michigan Reconnect is Ken Horn, R-Frankenmuth. “There’s a reason those (tuition) rates are so low” at community colleges – because communities are paying taxes to support them,” Horn said.

“Those who don’t pay those taxes should pay more,” Horn said, just as out-of-state college students pay more than in-state students at the state’s public universities.

Property owners in the Lansing Community College district, for example, pay 3.8072 mills to support LCC, the equivalent of $380 a year for owners of a home assessed at $100,000. Property owners in neighboring Eaton County don’t pay a community college millage, and Eaton residents aren’t eligible for free community college through Michigan Reconnect.

The Legislature approved $30 million for the Michigan Reconnect program for the current budget year. It would cost an estimated additional $7.5 million to offer free community college to the full state, rather than the 80 percent of residents now getting the benefit.

Not providing free community college to those outside of community college districts was “clearly a cost-containment effort by the state,” Fewins-Bliss said. “It’s understandable. But ultimately, we hope it can be revisited in the future.”

Some who only qualify for a partial benefit through Michigan Reconnect might still be able to attend community college for free, through federal Pell grants. Pell grants cover up to $6,195 a year for students in families with adjusted gross incomes of $26,000 or less. Students earning up to $60,000 qualify for smaller Pell grants.

In rural counties that aren’t part of community college districts, officials are scrambling to find ways to “fill the gap” between what is offered to students in the reduced Michigan Reconnect benefits, and the cost of enrolling, Oceana County’s Merton said.

In her county, Merton and others are raising funds to try to pay for the cost of community college not paid for through the state program. She said she knows the challenge, considering the number of people who would like to sign up for Michigan Reconnect.