In the span of a few weeks last fall, Alaiedon Elementary in Mason Public Schools lost two of its three first-grade teachers.

First to resign was Jackie Lyons, who came from a family of teachers and loved being around kids. She left in mid-October.

A colleague turned in paperwork to leave her position weeks later

Both were young and good at their jobs, teachers that Alaiedon Principal Shana Barnum called “rock stars.”

“It’s heart-wrenching,” said Barnum, who was left to scramble to find substitutes and eventually full-time replacements for the departing educators. “These were teachers in the prime of their career and so dedicated to their students. They were making these decisions (due to) a global pandemic.”

Michigan teachers are leaving the profession at alarmingly high rates this school year. Retirements are up 40 percent, and that figure doesn’t include young teachers who leave the profession in less than 10 years, when they typically would qualify for retirement benefits. (The state tracks retirement data, but not overall departures from the education field.)

And the real crisis may be just beginning, as Michigan schools already struggling to hire classroom teachers face a potentially larger shortage of teachers and substitute teachers going into next school year.

So far this school year — from August through February — 35 percent more teachers retired than the average of those who retired over those same months since 2016.

For example, last August, as schools were opening classrooms or starting online, 30 percent more teachers retired than the average number of retirements over the past four years (94 retirements in 2020, compared to an average of 72 in previous years). In September, retirements were up 74 percent; October, 71 percent; November, 41 percent.

The raw number of additional teachers retiring so far this year compared to normal remains relatively modest – about 200, in a workforce that approaches 100,000. But if the trend continues into the summer, the period when most teachers retire, Michigan schools could be hobbled next fall.

“I’m deeply concerned about the problem of not having enough teachers,” said Jason Mellema, superintendent of Ingham Intermediate School District. “If you’re eligible for retirement, people are questioning how much longer should I go?

“The pandemic is making people rethink what their priorities are in life.” 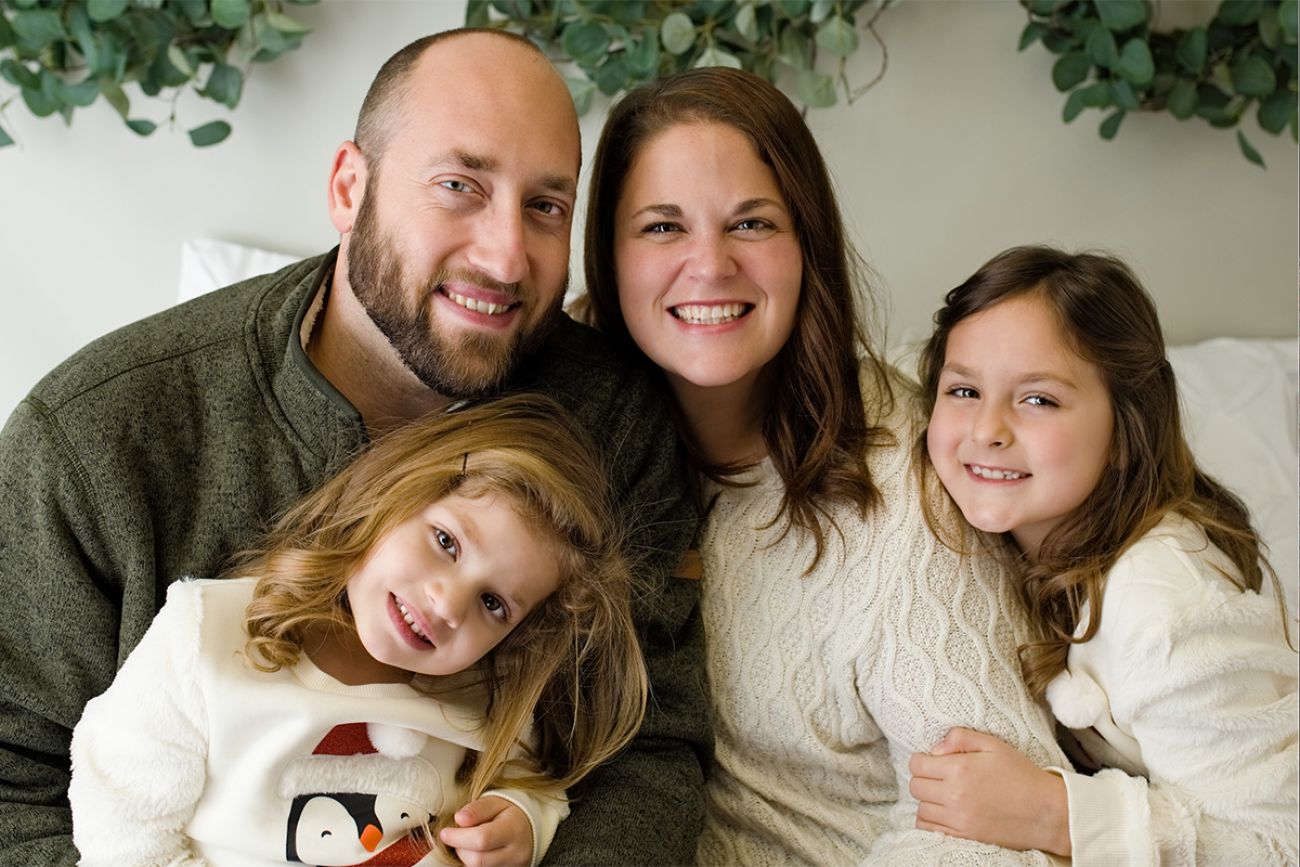 Jackie Lyons said she loved being a teacher, but she was losing hair and gaining weight from the stress of trying to teach from home with two young children of her own. Lyons’ family, from left: husband Travis, daughter Riley, Jackie, and daughter Taylor. (Bridge courtesy photo)

That’s what happened to Lyons, a first grade teacher in Mason.

Lyons loved being with her students. “That’s why you get into it,” she said.

The 33-year-old said there was always stress connected to the job, but it was COVID that finally made teaching not worth it.

At the beginning of the school year, she taught her first-grade class online from her home.

“I was losing hair, I was gaining weight, my husband was falling apart because I was teaching all day and he was home and he was trying to do his job and help our daughter who’s in second grade with her (online) class and our 3-year-old who wasn’t in day care, she needed help.

She took a leave of absence from her teaching post in early October, and resigned a few weeks later.

The school where Lyons taught first grade for nine years — Alaiedon Elementary — is a one-story building amid farm fields south of Lansing. Alaiedon principal Barnum said the school’s teachers started the school year with online learning, while developing a hybrid model with social distancing and mitigation strategies for when students would return to classrooms part time.

The challenge of teaching online and moving to a hybrid model — which requires teachers to instruct students in class and online at the same time  — “was creating some difficult choices for several of my teachers to have to make,” Barnum said.

By mid October, five of the school’s 30 teachers had applied to take time off through the Family and Medical Leave Act, which educators could take if they had children of their own at home who were taking online classes. Among those, Lyons and another first-grade teacher soon quit.

Barnum was left to scramble to find substitutes to lead her classrooms and search for full-time replacements.

“I was quite surprised how it impacted my building,” Barnum said. “These were people meant to teach.”

“There’s no question it’s gotten tougher for teachers,” Macheskyh said. “The last year has put additional undue pressure on teachers. Anyone who was contemplating (quitting), and not knowing what next fall will bring, might lead people to pull the trigger.”

Doug Pratt, spokesperson for the Michigan Education Association, the state’s largest teacher union, said the retirement numbers are an undercount of the number of educators fleeing classrooms during the pandemic, since those with less than 10 years of experience aren’t counted in state retirement data.

“It’s not only for safety reasons, but for burnout,” Pratt said. “The stress level of constantly changing educational delivery modes, in-person, hybrid, virtual, doing both at once, is incredibly high. It’s driving teachers who have the years in (to qualify for retirements) to make that decision.

“We’re hearing it’s not just the retirements,” Pratt said. “That’s the easy data to look at. We’re also seeing lots of people who are just flat out quitting” before they qualify for benefits from the retirement system.

There is no state data on teachers who leave the profession before qualifying for retirement benefits.

Pratt said there is growing concern among school leaders that even a small uptick in departures could become a crisis for some school districts already struggling with teacher shortages.

“Losing the hundreds of teachers you’re losing is one thing,” Pratt said, “but not being able to replace them is the real turning point.”

As Bridge Michigan has reported, Michigan schools have trouble replacing departing teachers because there are fewer college students who want a career in education than in the past.

Enrollment at Michigan’s teacher preparation programs dropped 70 percent in eight years. There were 16,000 fewer college students majoring in K-12 education degree programs in the 2016-17 school year than there were in 2008-09, according to data from the U.S. Department of Education.

Those 16,000 fewer potential teachers are the equivalent of one-sixth of Michigan’s current public school teaching workforce.

The number who graduated from the state’s college-based teacher prep programs — the primary pipeline for new classroom instructors — dropped 45 percent between 2011 and 2017, from 4,863 to 2,659.

“It puts pressure on if districts are looking for the same certified individuals, because of the fewer teachers coming out of the teacher preparation programs,” Troy’s Machesky said.

Comstock has already seen fewer candidates for teaching positions in recent years. With the added impact of the pandemic on the teacher pool, “We’re kind of holding our breath,” Thoenes said.

Teacher shortages have forced some Michigan schools to fill classroom gaps with long-term substitutes, who are not required to be certified teachers.

A 2019 Bridge Michigan investigation found that more than 2,500 Michigan classrooms were led by long-term substitutes, who weren’t certified teachers in the 2018-19 school year – a tenfold increase in just five years.

Students who need good teachers the most – low-income and academically struggling students – were the most likely to be stuck with long-term substitutes.

Another impact of a teacher departures: Schools are spending more of their budgets trying to outbid neighboring districts for substitute teachers to lead  their classrooms.

In Troy, daily substitute pay has increased 25 percent this year; L’Anse Creuse Area Schools in Macomb County has bumped daily rates up 50 percent, to about $170 per day.

“We felt compelled to,” said L’Anse Creuse Superintendent Erik Edoff. “It does have an impact on the budget.”

Superintendents who spoke to Bridge Michigan didn’t have any short-term solutions to address teacher departures. Several expressed hope that some educators would return to the classroom when the pandemic is over.

Ingham ISD’s Mellema warned that Michigan is reaping the consequences of what she believes is the denigration of the education profession, particularly by politicians.

“This is why I continue to stand on my pulpit and say our communities, our society, has got to elevate education back to what it once was,” Mellema said. “It’s an honorable profession and we need to start treating it like that again.”

Lyons, who left teaching at 33, isn’t sure what she’ll do going forward.

“I can’t honestly say I’ll go back,” Lyons said. “I miss the kids. But I don’t miss the other junk.