Kristen Seguin rented a petting zoo to come to her Pinckney home in Livingston County in October. There were ponies to ride, goats to pet and chickens to chase. In the middle of the chaos were 15 masked, school-age children.

All were students in public schools last year. This fall, all left classrooms and are now being home-schooled because of concerns about the pandemic.

Thousands of Michigan children who were in classrooms last school year are not enrolled in school now, according to estimates from school officials around the state. Districts that spoke to Bridge Michigan experienced enrollment declines of 1 percent to 2.5 percent.

Official state data on school district enrollment won’t be tabulated and released until spring. But school leaders who’ve spoken to superintendents across the state say they believe there could be more than 10,000 Michigan children missing from classrooms this school year who were in class in March, when school buildings were closed to try to stop the spread of the coronavirus.

“I’m hearing about losses across the state,” said Randy Liepa, superintendent of Wayne Regional Educational Service Agency, which provides services to Wayne County school districts. Liepa said enrollment is down at most Wayne County districts. “[Families] may be biding their time till they can come back” after the pandemic.

School officials expressed concern about how well students will readjust to a state-mandated curriculum when those students return to classrooms next year. A bigger question may be, will they return at all?

Ask the Newland family of Midland, who have two elementary-age boys who they pulled from public school in September because of the pandemic. “My boys say they think they want to be home-schooled next year” as well, said Janae Newland. “I’m glad we made the decision to do it.”

Schools anticipated some decline in enrollment this fall because of the pandemic. Some families worried about safety, and others were unhappy with the quality of remote learning they’d experienced the final two months of the 2019-20 school year.

The Legislature and Gov. Gretchen Whitmer enacted a one-time tweak in the school funding formula so that schools, which receive most of their state dollars based on the number of students in their building, wouldn’t face a large budget shortfall. For this school year, 75 percent of funding to school districts is based on last year’s enrollment, and only 25 percent on current enrollment.

In Kent County, 16 of 20 districts saw enrollment declines, according to Kent ISD’s Ron Koehler. In Wayne County, the majority of districts are down, according to Wayne RESA’s Liepa.

In Ingham County, where Lansing is located, Ingham Intermediate School District Superintendent Jason Mellema said preliminary figures show enrollment is “down significantly” in the county’s school districts, likely more than 2 percent (about 1,000 students across the county).

Novi Community School District in Oakland County is down about 1.5 percent, or about 100 students.

“There are a number of kids that seem to be missing from the system right now,” said Robert McCann, executive director of the K-12 Alliance of Michigan, an organization that advocates for public schools. “It’s not kids are moving from one district to another, because we’re not seeing increases in neighboring districts.”

L’Anse Creuse Public Schools in Macomb County conducted an audit of the 250 students who didn’t enroll in the district this year who were expected.

“We are open to in-person learning – that’s what our community wanted,” said L’Anse-Creuse Superintendent Erik Edoff. “We have an option for parents who want online learning.

“Even with that, we saw a number of student families that have opted out of school this year, particularly students in younger grades K-2,” said Edoff, whose district enrollment is down about 2.5 percent.

Wanda Cook-Robinson, superintendent of Oakland Schools, which provides services for Oakland County’s traditional school districts, said there is “a big push to find MIAs – we know students are missing and we are trying to figure out what is happening with their education.”

One large group not in classrooms this year: kindergartners.

Cook-Robinson said some families are delaying kindergarten – in effect, pushing back the start of 13 years of school until a vaccine is developed and distributed.

“When you think of a kindergartner, and their first experience being virtual, parents may be holding them back,” Cook-Robinson said.

One example is in Troy Public Schools. There, enrollment is down 2.5 percent, or about 300 students, according to Troy Superintendent Richard Machesky. Of those 300, about half the enrollment drop is among expected kindergartners.

That matches a pattern found by The Mackinac Center, which surveyed large Michigan districts and found, as of mid-September, kindergarten enrollment was down an average of 17 percent.

There’s no discernable pattern for other students who aren’t enrolled this year, school officials say. 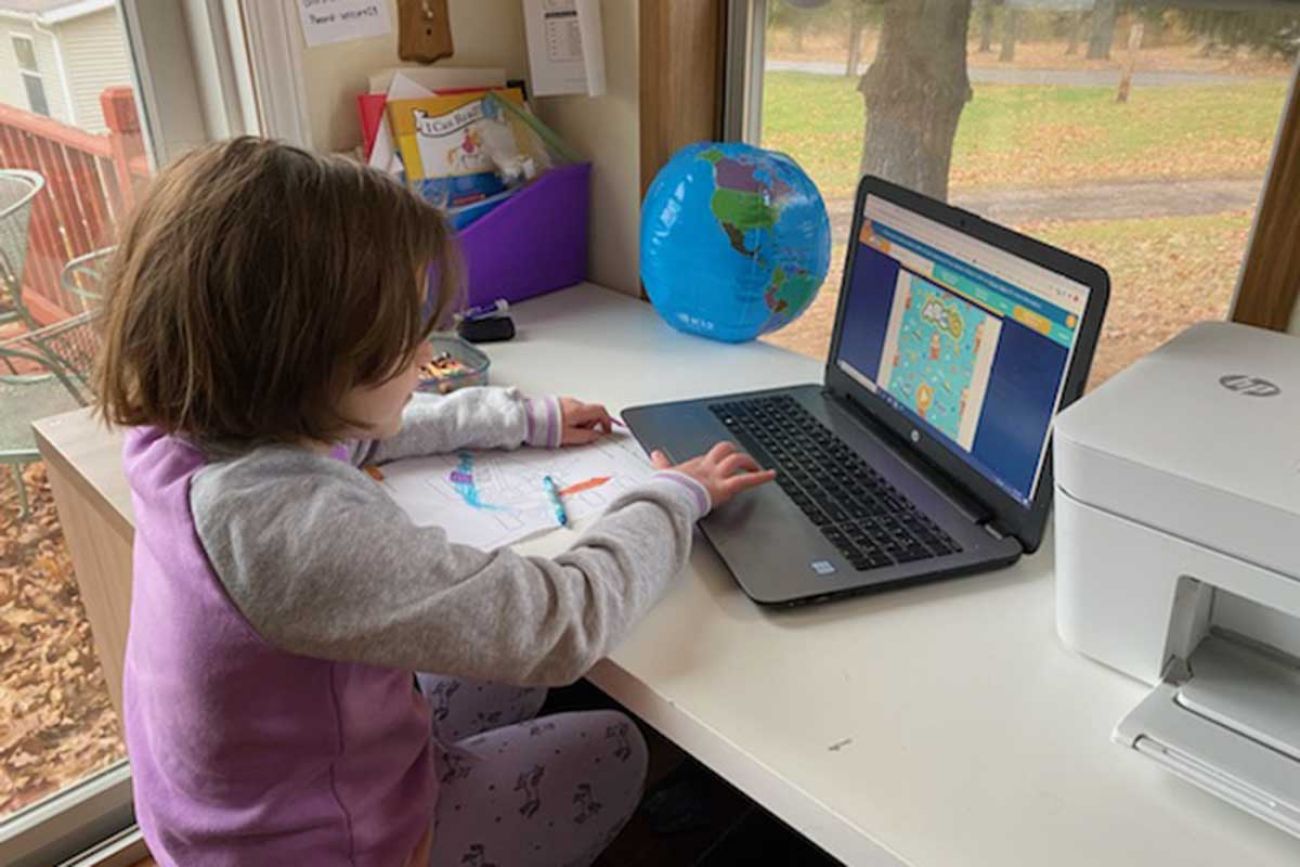 Two of the state’s “missing” children are in the Newland family in Midland. Janae Newland has boys who would have been in second and fourth grades in Midland Public Schools this fall. Instead, she and her husband pulled them from school, ordered curriculum materials online and set up a home school in the family’s dining room.

“My [current] fourth-grader, he had a math worksheet, he had to draw the answers on the screen and download it. It was so cumbersome,” Newman said. “We knew the virtual option wasn’t for us.”

Midland offered students an option this fall of attending classes in person.

“I knew they were taking a lot of precautions, kids in masks and plexiglass screens,” Newman said. “My younger son (now in second grade) is really high-energy, and I thought this is just going to be miserable for him, with very little hands-on experience and gym would be difficult, not to mention the possible exposure to COVID.

“It seemed like the perfect opportunity to just keep them at home and have them be able to run and be outside and do science experiments.”

Newland is a former teacher, but admits home schooling isn’t easy even for her. Through research online, she found home-school curriculum that aligns with the curriculum in Michigan schools so they will be on the same path as their public school classmates when and if they return.

“You could mess it up if you don’t do a little research,” Newland said. “But there is curriculum out there.”

“We’re early on in figuring out how to make this work for us,” she said. “It’s not a cakewalk; you’re dealing with strengths and weaknesses and two different grades. You’re sort of ping-ponging between kids.”

Katie Stoll lives in Grass Lake in Jackson County, and would have had two kids attending Chelsea Public Schools this fall. She understands the need for COVID safety precautions in classrooms, but she “couldn’t justify putting my kindergartner and first-grader in masks for eight hours a day.

“My kids, when they wear a mask for two hours, it’s soaked,” Stoll said. “It’s humanly impossible at their ages to not put things in their mouths.”

Stoll said she didn’t want some of her kids’ first impressions of school to be socially distanced from classmates and wearing masks. “My kindergartner should have a great first year,” she said. “My first-grader, she should be able to go and enjoy and not have to worry about all these things in the outside world.”

Stoll enrolled her children at Michigan Virtual Charter Academy, part of Hazel Park Schools in Oakland County, an experience she says has been “awesome – they provide everything for you, including a laptop and a printer.”

Kristen Seguin has a 10-year-old and a 14-year-old who always attended public schools, but are being home-schooled this year in the pandemic. Seguin said she worried about her kids’ safety in classrooms, and was unimpressed with the online offerings Pinckney Community Schools offered in the spring, when schools were forced to turn their learning systems upside down in a matter of days.

“They miss their friends from school, [but] we have several families engaging in safe activity. We do things [together] regularly.”

Those families, too, were in public schools last year.

School leaders who spoke to Bridge expressed concern about the long-term educational impact of students leaving public schools this year.

“There’s a financial issue with this [for the districts], but more importantly, it’s difficult for students [in home-school] to stay on pace, even with our current learning model,” L’Anse Creuse’s Edoff said. “For children not in a structured environment, I’m very concerned about the long-term impact.”

Added Cook-Robinson of Oakland ISD: “This is such an unprecedented time, I suspect we’ll have to figure out a plan for how to bring all our students back” to grade level when they return to classrooms.

Studies are mixed on the educational outcomes of home schooling. One study found that home-schoolers with a structured academic program achieve at higher levels than those in public school, but those without structured learning programs fall behind.

Several families who spoke to Bridge Michigan said they hadn’t planned to home-school before the pandemic, but now are considering continuing home learning even after a vaccine is developed.

“My husband and I really kind of enjoyed having a hands-on learning experience with our kids,” said Stoll, of Grass Lake.

Three months into her home-school experiment, Seguin has mixed feelings. Her 10-year-old has special needs and appreciates the services a state-funded school can offer. “He’ll return when a vaccine makes it safe to return,” Seguin said. “I doubt my 14-year-old ever goes back.”

“It’s tricky – strong public schools lead to a strong community,” Seguin said. “I know I certainly depend on them for my 10-year-old.” But she said some families are coming to appreciate “the flexibility and opportunities you don’t get in traditional school.

“It’s going to be an interesting few years, for sure.” 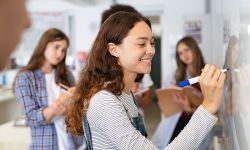