Why do Detroit kids miss so much school? Hint: Don’t just blame the schools

Talent & Education
Why do Detroit kids miss so much school? Hint: Don’t just blame the schools

Detroit students have among the highest rates of chronic absenteeism in the nation, and a new report suggests schools alone can’t fix it.

Instead, the major causes for Detroit students missing class at three times the state average are predominantly outside of school, such as asthma, poverty, segregation and plummeting city population, according to a new report by researchers at Wayne State University’s College of Education.

“While school-based efforts to reduce absenteeism are critical, they are likely insufficient to address the enormous challenges students face in getting to school in Detroit,” report co-author Sarah Lenhoff, assistant professor of educational leadership and policy studies at Wayne State, told Bridge Magazine.

While focusing on the challenge of absenteeism, the report provides further proof of a broader, sobering lesson for education reformers:  School-focused efforts such as teacher accountability and student testing are limited by factors that educators may have no control over.

The 62 percent figure represents an improvement over the previous year, when 70 percent of Detroit students were chronically absent. It’s an increase, however, over 2016-17 (56 percent) and 2015-16 (55 percent).

School attendance impacts academic achievement. Detroit has the state’s highest rate of chronic absenteeism, and also is among the state’s lowest-performing school districts on the state’s standardized test, the M-STEP.

Last year, Detroit schools spent $9 million to hire attendance agents for most of its 106 schools to check up on students at their homes when they’ve been missing from class. The district has also added vans to pick up students who’ve been chronically absent.

Researchers examined a number of environmental and structural factors in 33 cities across the nation with populations over 500,000. The study found:

Detroit has one of the nation’s highest rates of asthma, which alone causes more than 1,700 days of missed school, according to one study.

The research suggests that efforts to improve attendance in Detroit schools can’t be based solely in the schools themselves, Singer said, but must include community-wide efforts. Examples could include more reliable, affordable public transportation in a city where four in 10 adults don’t own a car, and considering student walking routes to schools when planning community redevelopment.

“A lot of our efforts so far have been school-based efforts,” Lenhoff said. “Those efforts only go so far.”

Lenhoff said she hopes the study will help state leaders understand that school achievement is a reflection of community achievement.

Community leaders are beginning to work together on the issue, forming a group called Every School Day Counts Detroit with the goal of decreasing chronic absenteeism to 15 percent by 2027.

“It’s important to document this so we can begin to do something about it,” Singer said. “This has to be approached in a coordinated way.” 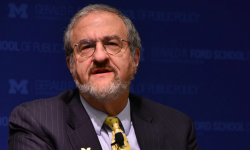 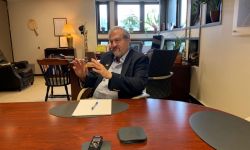