When Michigan last week released its first list of nursing homes with coronavirus patients, Cathy Wilson scanned it quickly, looking for the facility where her aging mother lives in Royal Oak.

It wasn’t on the list, even though just two days before, Wilson said facility operators told her that seven residents had died from COVID-19 and three more had the disease.

“To find out that seven people had died made me think ‘Do I need to get her out of there?” Wilson said, referring to her mother.

It may be a long wait. Despite promises from Gov. Gretchen Whitmer for better transparency on senior care during the pandemic, Wilson’s mother lives in an assisted-living facility  — and Michigan doesn’t collect information about coronavirus at the home or 4,000 others like it statewide.

Indeed, although Whitmer is beginning to release data about COVID-19 in senior facilities, the gaps remain striking  — especially since the elderly are so affected by the disease.

Despite an April 15 order from Whitmer requiring all long-term care facilities to report coronavirus cases, Michigan so far has only released information from nursing homes.

The records showed Michigan has nearly 2,600 cases at 146 homes, but patient deaths aren’t included. Nor are the number of residents who have recovered.

And Michigan allows nursing homes to self-report the information about coronavirus. So far, 13 percent of them (61 of 482) have not done so.

State officials said they hope to close some of those holes soon.

They plan to finish drafting reporting guidelines for long-term care facilities this week, after which a timeline for the release of data could be forthcoming, said Robert Wheaton, a spokesperson for the Michigan Department of Health and Human Services.

The pace of reporting statewide contrasts to Detroit, where Mayor Mike Duggan dispatched teams to test residents and staffers in 27 city facilities. The city found 1 in 3 nursing home residents had coronavirus and published the results online.

That’s a level of rigor that advocates for the aged say helps not only nursing home residents and their families but staffers as well.

“I’m really glad they are collecting the data, and I’m glad they’re making public as much as they can.”

The push for more reporting, detailed extensively by Bridge in recent weeks, comes as it has become clear the virus is devastating nursing homes.

Nationwide, more than a quarter of all coronavirus deaths, 11,000 out of 39,000, were at nursing homes in 36 states, according to NBC News. More than half of all deaths in Oregon and Maryland were in nursing homes.

More information on the scope of the problem could drive better policies that could lead to better care for residents, said Priya Chidambaram, an analyst with the Kaiser Family Foundation who recently studied how different states were reporting data.

States such as Florida, Tennessee and Oregon have provided detailed information about long-term care facilities, according to Chidambaram’s research for the nonprofit that focuses on national health care issues.

Researchers have said nursing homes and other senior facilities are perfect breeding grounds for the virus, as many residents are in compromised health.

Nationwide, 75 percent of nursing homes have been cited for infection control errors. That rate is similar or slightly higher in Michigan, according to Medicare data reviewed by Bridge Magazine.

But with coronavirus so widespread, it has hit facilities with cited “deficiencies” and those without, Chidambaram said.

Indeed, of the seven nursing homes statewide with the most severe deficiencies during the last three years of state inspections, only one has reported any COVID-19 cases, according to records reviewed by Bridge.

Those that were identified represent fewer than 10 percent of all long-term care facilities.

One problem: Some types of long-term care facilities aren’t licensed by the state, Slocum said, and the state knows little about assisted-living and “memory care” facilities.

Overall, Detroit found 940 cases in nursing homes and 187 deaths, about 20 percent of the city’s total.

But eight of the Detroit nursing homes, which had 189 cases, did not report data to the state.

Wilson hopes to get another update on Wednesday about the facility where her 92-year-old mother lives. She said she wishes all facilities in the state that care for the elderly were tested and the results were made public.

“If you’re taking care of a senior in a senior care facility, you should,” she said. 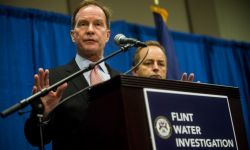