Are there two Detroits? A new report says yes, but...

Urban Affairs
Are there two Detroits? A new report says yes, but... 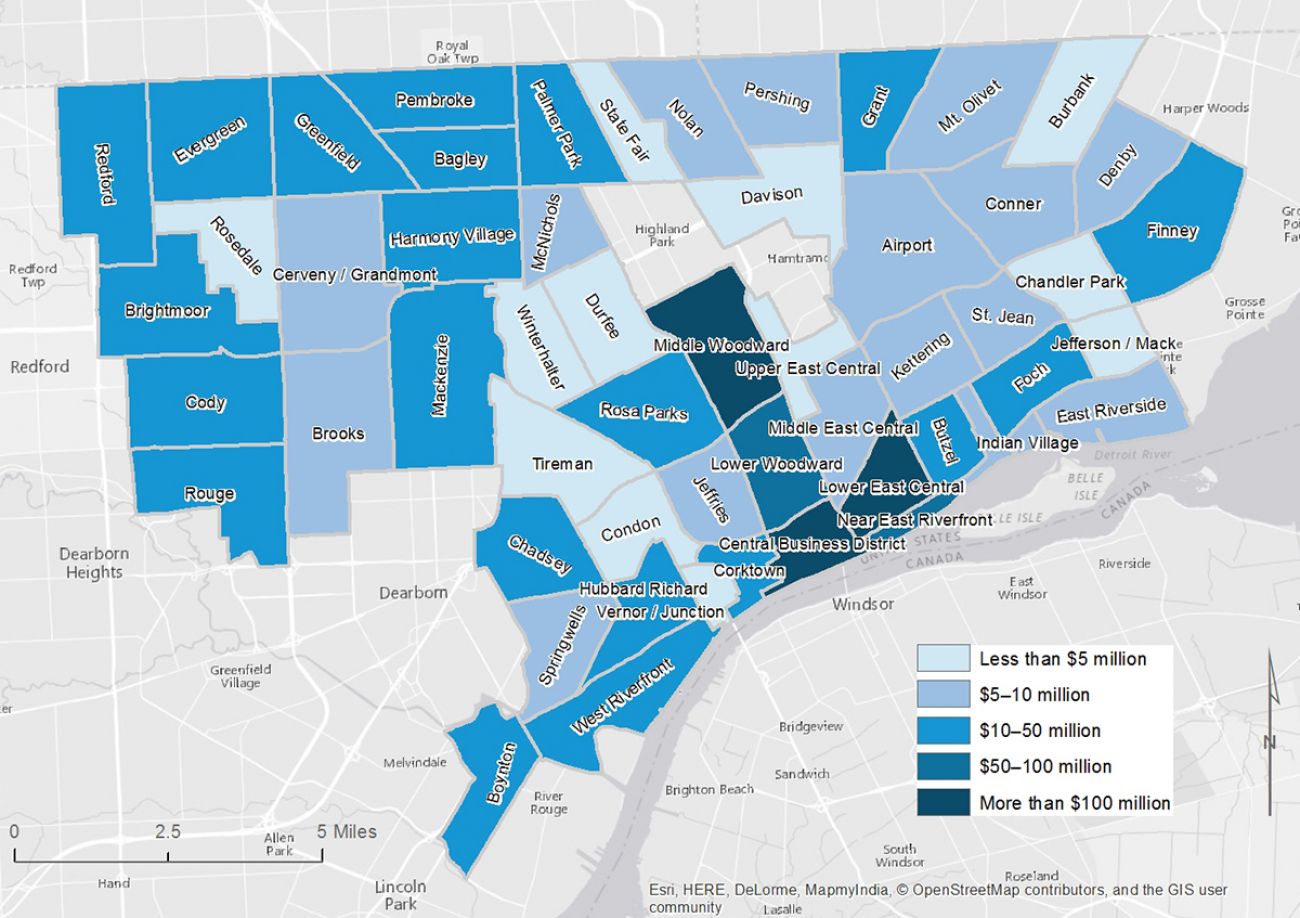 Most funding goes to business core

Turns out, there could be something to perceptions about “two Detroits” after all.

The Urban Institute, a nonprofit Washington D.C. think tank, issued a report Tuesday that concludes tax subsidies in Detroit have disproportionately favored downtown and Midtown. Those areas received 57 percent of state, federal and local tax subsidy investments from 2013 to 2015, even though they only contain 46 percent of the city’s 245,000 jobs, the report found.

“This combination of growth downtown and more limited investment in outer neighborhoods … can make Detroit appear to be a ‘tale of two cities,’” the report said.

But Brett Theodos, the lead author of the report, told Bridge there’s a good reason for the discrepancy. Private investment and tax subsidies follow jobs. And they’re clustered in downtown and Midtown, particularly white-collar ones.

“If you look at the amount of investment per job per neighborhood, it doesn’t look like downtown is getting outsized levels of investment. That’s the one hand,” Theodos said.

“On the other hand, jobs are not equally located across the city .. and Detroit is especially sprawling. There’s a stark divide between who is working downtown and who is working in neighborhoods.” 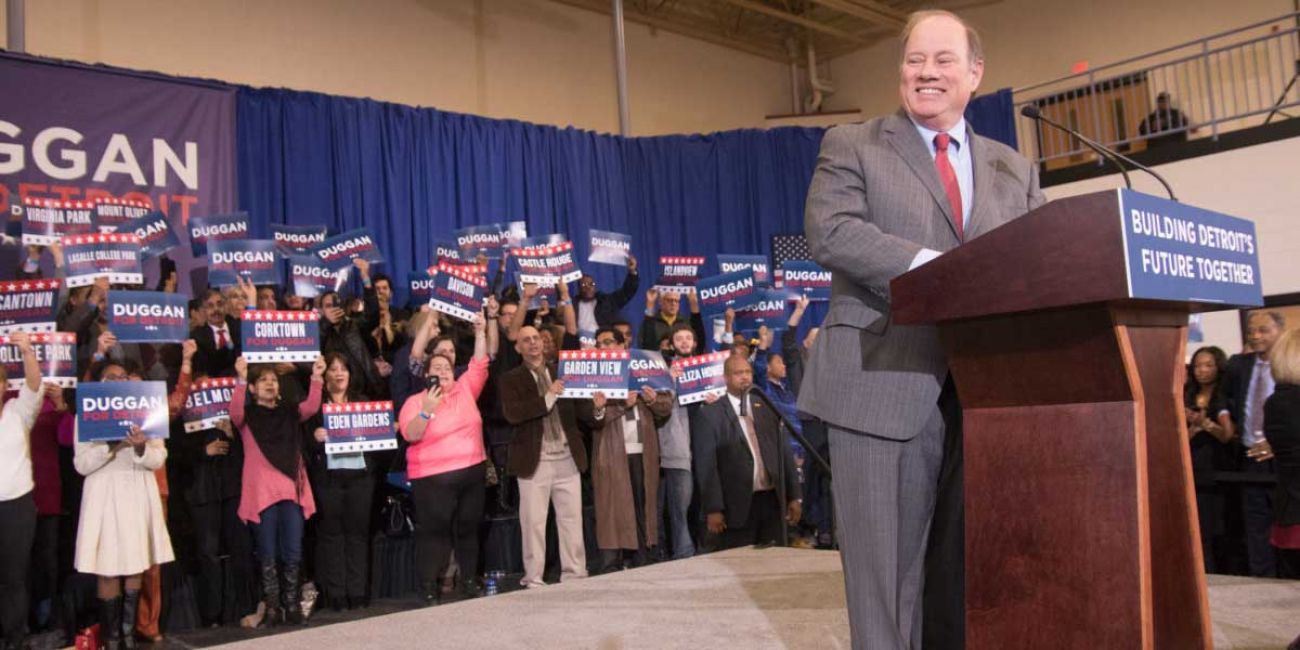 In any other year, and perhaps any other city, the finding may not get much attention. Much of the report focuses on how Detroit’s revival was aided by mission lending, loans with a social purpose, often backed by philanthropies when traditional ones aren’t available.

But the “two Detroits” narrative is so controversial –  and a theme in the campaign between Mayor Mike Duggan and challenger Coleman A. Young II –  that the tax subsidy breakdown is sure to spark conversation.

Theodos said that was his intention.

“We want to feed into larger discussion about whether resources have been overly spatially concentrated,” he said.

“That’s a very salient point of discussion right now. We just wanted to acknowledge, yes, by some measures. But by other measures, not especially. It depends on what (point of view) you take.”

For Young, there’s no debate.

“Nobody who lives in neighborhoods could be surprised by this report,” he told Bridge.

“City Hall doesn’t give a good goddamn about them. … There’s no reason we should have all the tax breaks downtown while the neighborhoods aren’t getting opportunities.” 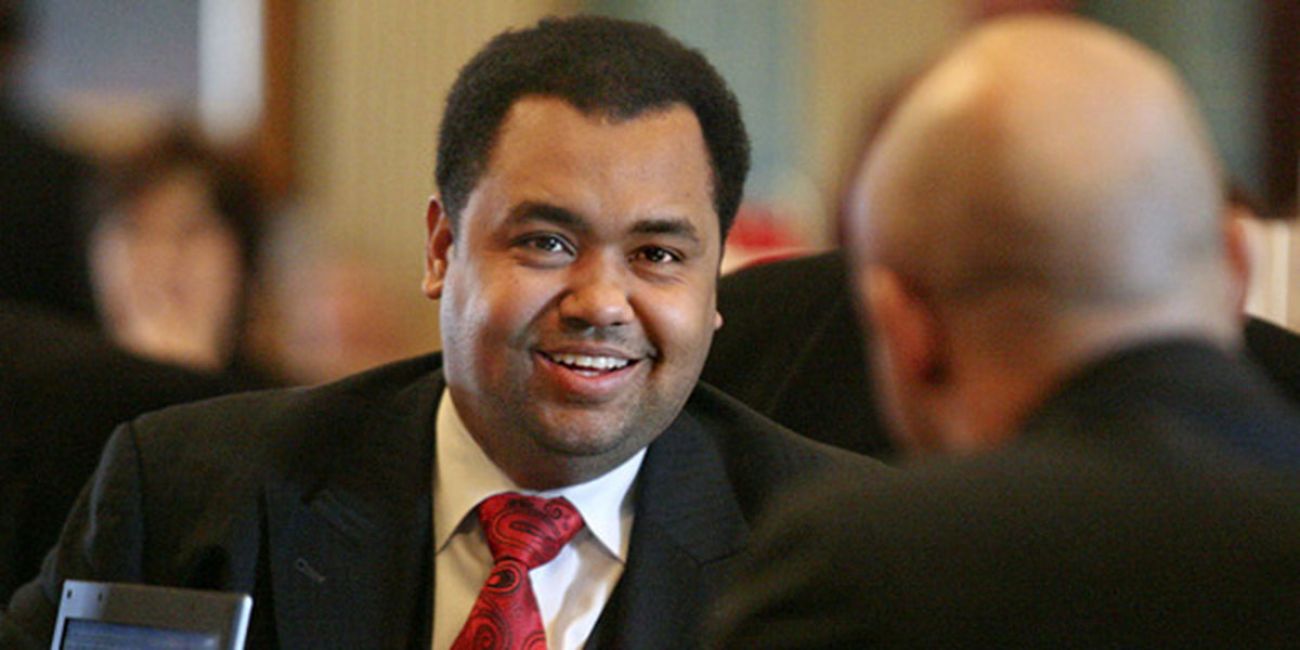 John Roach, spokesman for Duggan, said Monday the report only “tells part of the picture” because it doesn’t include other significant investments to neighborhoods, such as demolitions of some 11,000 dilapidated homes.

Even so, the findings validate the city’s strategy that led to the Midtown comeback and will be replicated in neighborhoods such as Livernois in Northwest Detroit, said James Arthur Jemison, director of housing and revitalization for the city.

“In any marketplace, financing goes to places where there’s an ability to repay,” Jemison said. “When people come to the market for the first time and don’t understand the pent-up demand and credit worthiness, they gravitate to one place. It’s our job as a city to show them other areas.” 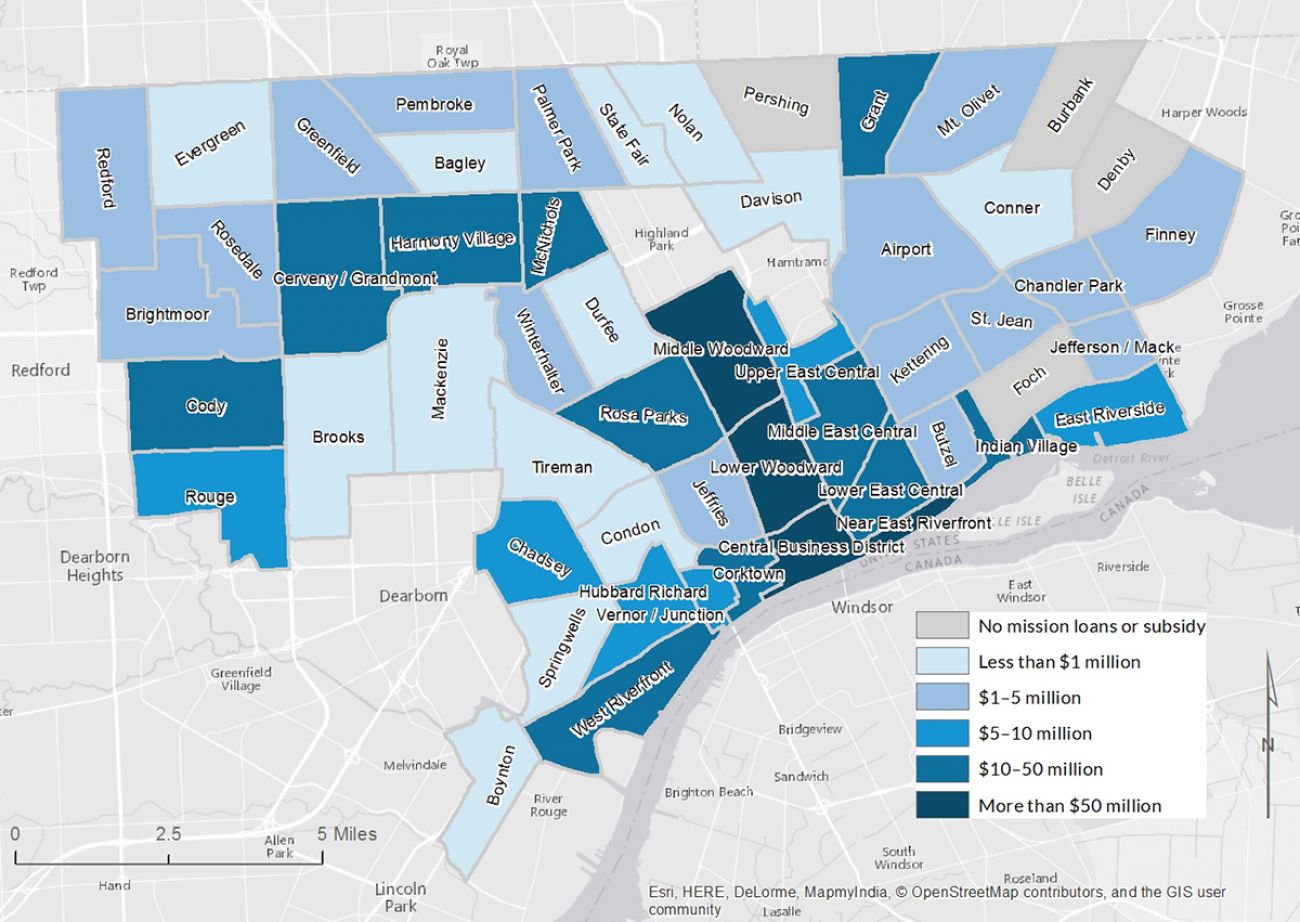 The report underestimates the total amount of subsidies.

The Urban Institute report is the latest in recent weeks to fuel a “two cities” narrative that Duggan told the Detroit Free Press in August is a “fiction” created by the media.

Last month, the nonprofit Detroit Future City released its “139 Square Miles” report that found that blacks, who comprise 80 percent of the city’s residents, hold only 33 percent of the city’s jobs. The report also found that job growth in Detroit is fueled by an uptick in jobs paying $40,000 or more per year, which are “concentrated along Woodward Avenue in Downtown and Midtown, as well as the city’s core industrial areas.”

Downtown versus neighborhoods has been a recurring issue in mayoral elections for decades. But it’s particularly acute for Duggan, who advanced in last month’s primary against Young with 67 percent of the vote.

In May, speaking to business and government leaders on Mackinac Island, he said his guiding principle is “one city for all of us.” His administration has rolled out several neighborhood-friendly initiatives, from small business incentives and mortgage loan programs to walkable neighborhoods and a website devoted to neighborhood stories.

Jemison, the city’s housing and revitalization director, said that investment and tax subsidies are beginning to be spread more evenly throughout the city. The report began when the city was at absolute rock bottom, the 2013 bankruptcy.

“Over the next few years when you look at the (investment) map, there will be a few more bright spots in the area,” Jemison said.

Young said Duggan “should be ashamed” by the condition of the neighborhoods, pointing to tens of thousands of water shutoffs and tax foreclosed homes.

RELATED: Sorry we foreclosed your home. But thanks for fixing our budget. 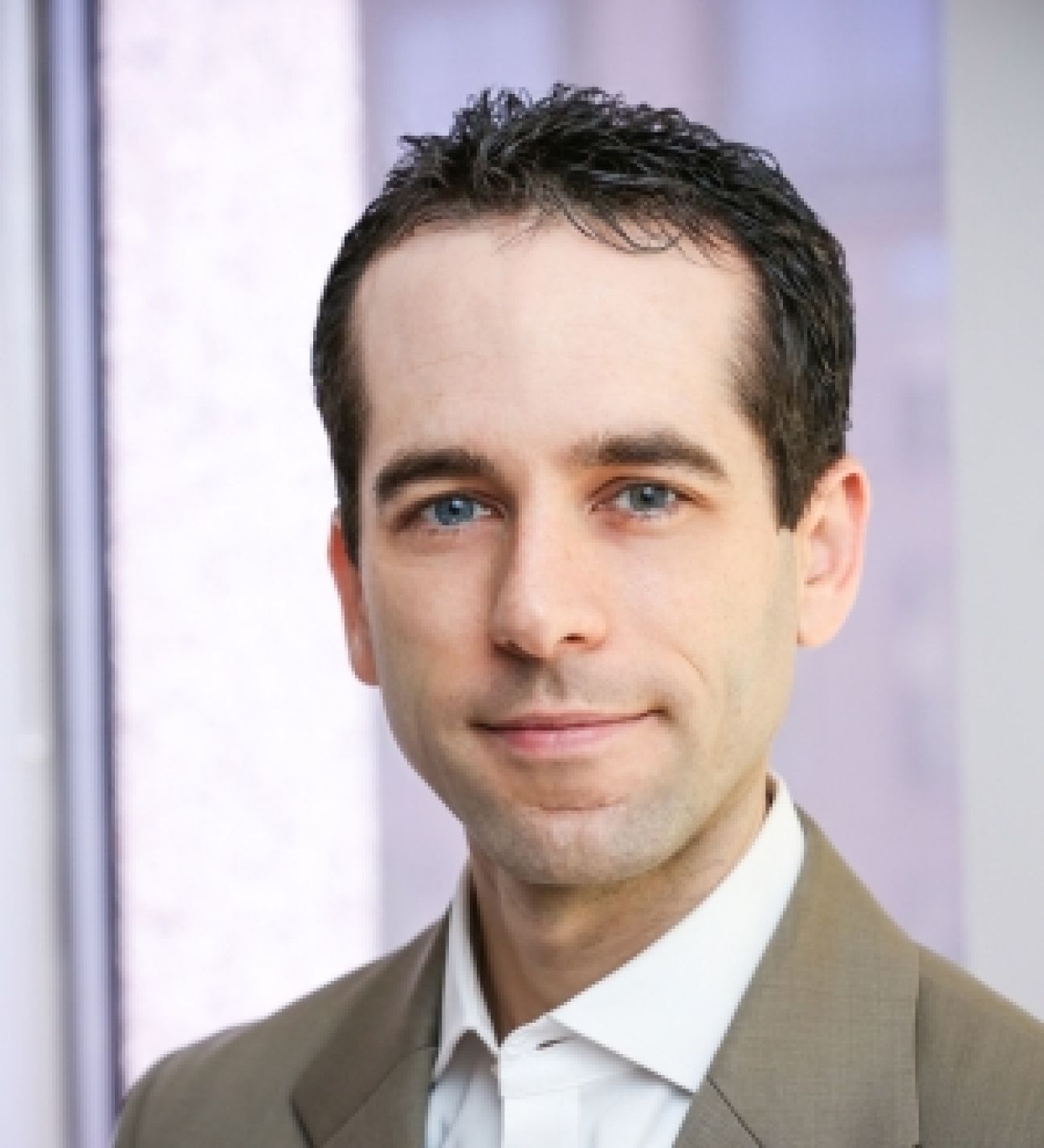 Theodos of the Urban Institute recommended government policy makers and philanthropies enact a handful of reforms to ease mission lending in neighborhoods.

Among them: easing rules about tax subsidies to make them easier to use on smaller projects; providing technical help and money to nonprofit community groups and streamlining City Hall regulations on zoning and code enforcement.

“There’s a lot more work needed if this (revival) is going to filter beyond the most easily accessible and developable parts of the city,” Theodos said.