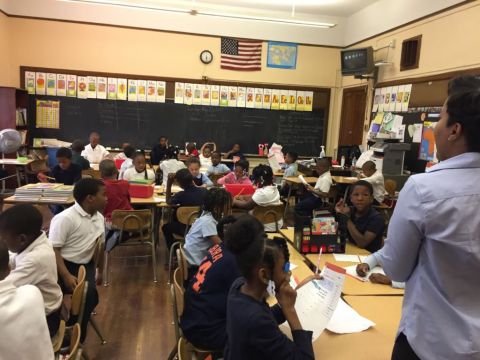 Detroit schools have been buzzing these last two weeks with what feels like a fresh start.

A new superintendent —  Nikolai Vitti — has landed in the city and started his job as the first new leader of what is officially a new district.

He uses words like “transformation” and “vision” and “hope” to describe a future when Detroit schools will begin to address the intensive challenges that have contributed to some of the lowest test scores in the nation. He sees Detroit becoming “a mecca of improvement” that will draw young teachers from around the country who will want to be part of a city’s metamorphosis.

But spend a morning in a Detroit classroom and it quickly becomes clear exactly how much will have to change in this city before it looks anything like the “mecca” that Vitti imagines.

Spend a morning in Room 106 at the Paul Robeson Malcolm X Academy on the city’s west side.

That’s the room where first-grade teacher Rynell Sturkey arrived on the morning of May 23rd — Vitti’s first full day on the job — to discover that another teacher was out on jury duty. Since substitute teachers are rarely available, Sturkey would — again — have to double up. That morning, she’d have 37 kids.

A teaching shortage has prevented the school from hiring for non-academic classes such as music, art and gym. So Sturkey and her students will be crowded together in their cluttered classroom for seven hours, with only a break for lunch and recess. She and her colleagues get none of the prep periods that are standard for teachers in schools with more resources.

“They’re with me all day in this room. We’re tired,” she said. “We make the best of what we’ve got. We work together as a team here. We support each other. But we’re exhausted.”

In addition to the crowded conditions, Sturkey says her curriculum didn’t arrive until March. Her kids are tested on computers they don’t know how to use and key supports such as social workers and counselors are hard to come by.

Sturkey has heard Vitti’s hopeful message, she said, but teachers in this city have heard a lot promises over the years and have seen the painful effects of disappointment on the city and its most vulnerable children. 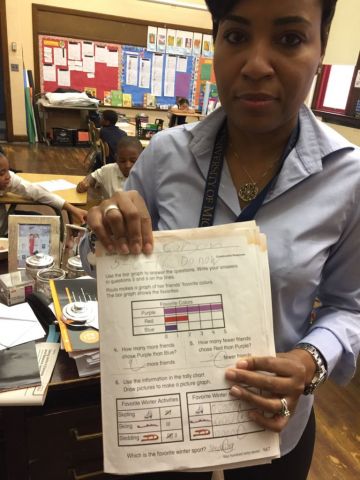 “I’m keeping an open mind,” said Sturkey, a 17-year veteran of the Detroit district who grew up in the city and attended its schools. “I have to. I care about this city. I care about these kids."

On the morning of May 23, Sturkey started her day moving desks around to accommodate an additional class of 20 kids. Soon, it would be difficult to walk between the packed-in desks. Some were jammed against the blackboard, others clustered near the door.

When storytime arrived, Sturkey had to lean against a wall to read to her students instead of sitting on the floor as she prefers.

“You’re not going to be able to see the pictures,” she told them as she opened “The Garden” story from the Frog and Toad series. “I’m sure everyone understands, right? I can’t get you on the floor to do reading today. There’s too many of you.”

Sturkey read loudly and clearly to be heard over the tapping pencils, squeaking chairs and shuffling feet of more than three dozen 6- and 7-year-olds. Some kids listened to the story. Others, unable to see the pictures in the book, gazed out the window. One boy had his head down on his desk, apparently asleep.

“Heads down! Mouths closed!” Sturkey snapped when the noise level got too high. “What is all this noise? I hear a lot of talking!”

The noise level in the class is a direct result of a district-wide teacher shortage. Across the city last month, more than 200 teaching positions were unfilled, including two at Robeson. 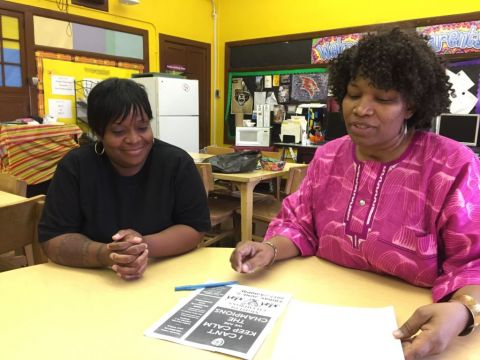 Principal Jeffrey Robinson says his openings are not a priority because they’re not in core subjects like reading or math. And low salaries make hiring difficult. First-year teachers earn $35,683 a year in Detroit according to the current contract with the city teachers union. Many suburban districts pay thousands of dollars more.

“On three separate occasions, we got people who got past the onboarding process, right to the point where they were ready to sign the contract. Then they took a better offer because the salaries are just not competitive,” Robinson said.

The absence of those teachers is compounded by the lack of substitutes, he said.

When the school’s seventh-grade teacher was out for an eight-week medical leave this year, the district sent a substitute for only one day, Robinson said.

Help didn’t arrive until the seventh-grade teacher returned last month from her leave.

The rest of the time “we had to make do,” Robinson said. “My teachers and I, we switched around. We did the best we could given the situation but my children’s achievement suffered.”

The doubling up in Sturkey’s classroom, which happens roughly three or four days a month, she said, is one way the teachers at Robeson make do.

It’s difficult, she said, but not as difficult as last year when she had 38 students enrolled in her classroom every day.

With that many kids, “it’s like you’re literally going into survival mode,” she said. “You’re constantly stopping for behavior or emotional needs or not knowing what’s coming in through the door that morning. For the most part, we’re able to teach, but some days it can be challenging.” 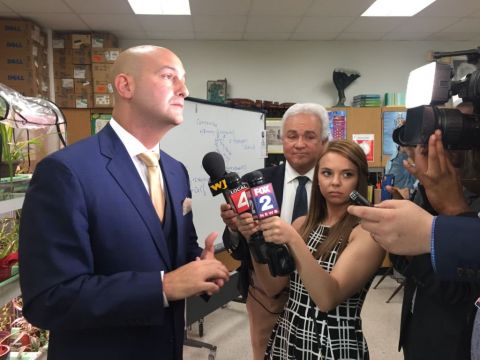 Working with too many kids is only one of the challenges Sturkey has faced this year. Another was a math curriculum that didn’t arrive until March.

The textbook arrived on time, she said. But the workbooks that are a key part of the district’s math program were missing through the fall and winter.

“They just kept saying it was coming,” she said. But months passed without anything arriving.

“I supplemented with whatever materials that I had on my own, whatever research materials I could find online to use for the children,” she said. “But if you require that we use it and you’re expecting for us to use it, it should be here for us to use.”

The lack of materials have affected her students’ performance on the tracking tests the district requires her students to take, she said. But the fact that the tests are administered online makes it difficult to really evaluate their skills.

That’s because the school only has one computer lab, and that lab is dedicated almost exclusively to online testing.

When Sturkey’s students come into the lab for testing, they spend most of their time trying to figure out how to use a mouse, she said.

The lack of computer time also affects older kids in the school, including those in grades 3-8 who take the high-stakes exams that state officials use to determine which schools should be closed for poor performance.

They’re “in there all day because they’re hunting and pecking,” Robinson said. “So on top of the challenges that the test itself presents, they have a tactile, a physical challenge because they’re not able to do the test.”

The Detroit district has some of the lowest-performing schools in Michigan. Just a fraction of students in grades 3-8 — 4.1 percent — were reading and doing math at grade level last year.

Paul Robeson Malcolm X claims to be the first public school program in the United States to provide an African-centered curriculum.

The school “still produces greatness. It really does,” said parent leader Aliya Moore, 36. “Despite the shortcomings, the staff that is here finds creative ways to let a child, you know draw, or do the music part, but it’s hard now because their creativity is smothered.”

The Detroit district she attended as a child was “full of resources,” Moore said. “I had art. I had music. I had gym. I had free drivers’ training. Supplies were plentiful.”

Moore puts the blame for the district’s current lack of resources squarely on intervention by the state of Michigan.

She graduated in 1998. The following year, state lawmakers led by then-Gov. John Engler, a Republican, removed the elected school board and replaced it with a seven-person reform board, appointed largely by the mayor, that ran the schools for six years.

A decade later, another governor, Jennifer Granholm, a Democrat, named the first of a series of emergency managers who ran the district — and presided over skyrocketing debt and plunging enrollment.

A newly elected school board took over the new district in January. It chose Vitti in April, hiring him away from the 130,000-student Duval County Public Schools in Jacksonville, Florida.

At an event last week, Vitti told a gathering of business and political leaders that he recognizes that Detroit teachers have experienced “trauma” from the “chaos” of recent events.

“We have to recognize the past and understand the pain that’s connected to that past because it’s real,” he said at the Mackinac Policy Conference on Michigan’s Mackinac Island. “You hear it from teachers on a daily basis, but you also see the beauty of what’s happening in the school system.”

Vitti has vowed to address the teacher shortage and to do what he can to raise teacher pay. During his job interview, he boasted of expanding music and arts in Florida. He talked of better technology for schools and says he’s listening to teachers and administrators.

The parents and educators at Robeson remain skeptical. They know that despite the district’s status as a new, debt-free entity, it still faces severe financial constraints.

But they’re hopeful that some things, somehow, will change — and that students in the district will someday have the same opportunities as their peers across the state and nation.

“Our kids come to school because they want to learn,” Sturkey said. “We need for them to have a level playing field.”

The Center for Michigan’s Bridge Magazine is the convening partner for the group, which includes Detroit Public Television (DPTV), Michigan Radio, WDET and New Michigan Media, a partnership of ethnic and minority newspapers.

Funded by the John S. and James L. Knight Foundation and the Ford Foundation, the DJC partners are reporting about and creating community engagement opportunities relevant to the city’s bankruptcy, recovery and restructuring.