Throughout the Detroit protests, many young people have stepped in at key moments to advocate for systemic change and a radical difference in the policing of black and brown communities.

During the five days of protest, the crowds have been diverse and, at times, appear to be majority white, Millennial and Gen Z.

“These children are trying to break segregation biases, these are the children of L. Brooks Patterson, they are breaking that county line,” said Meeko A. Williams, 35, who helped organize the first protest on May 29 at the Detroit Police headquarters downtown. He was referring to the former longtime Oakland County executive who, for some, is a symbol of late 20th-century racial divide between the city of Detroit and its suburbs. 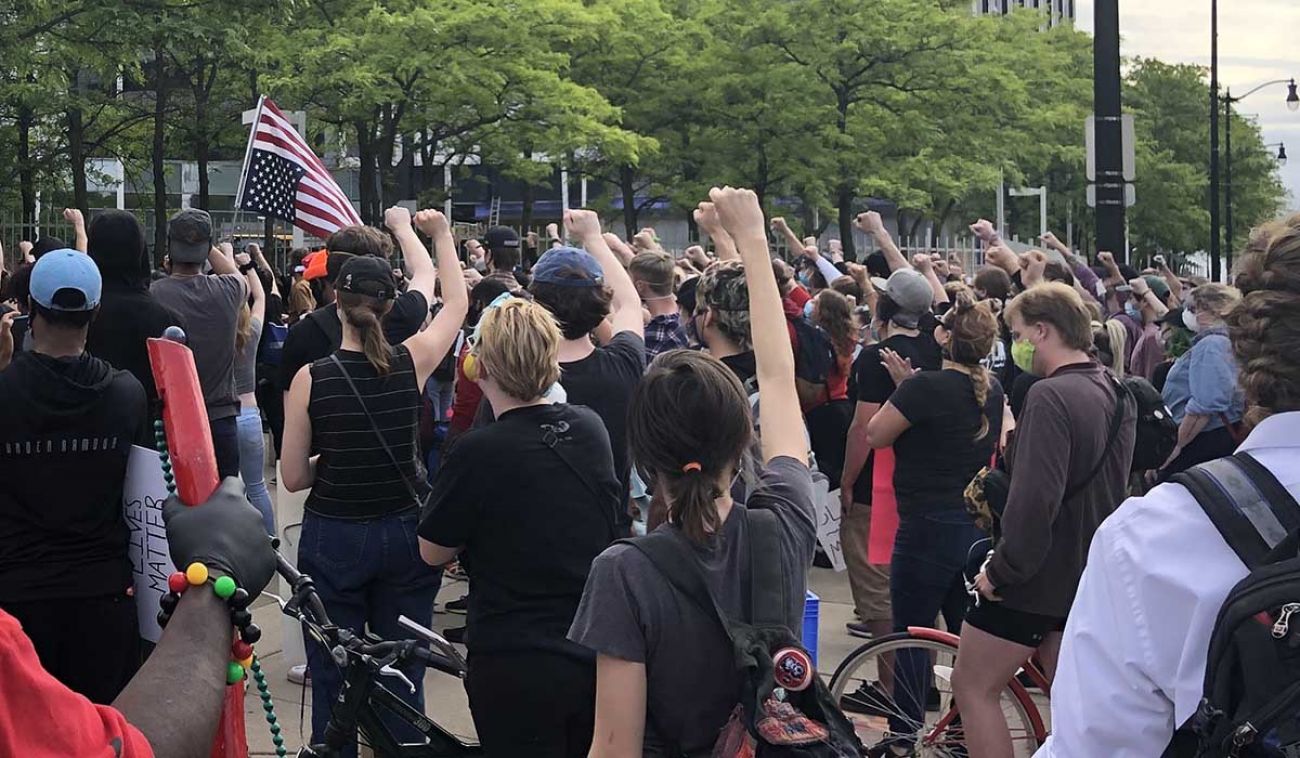 “Unemployment has hit 40 million Americans, making them reconsider what they are doing with their lives and we are the ones working all of the hours,” said Williams.  He encouraged older activists to “stand with” young people.  “We don’t need to be down-splained or old-splained to,” he said.

The killing of George Floyd, a Black man, by a white policeman in Minneapolis is the catalyst for nationwide protests in at least 150 cities, suburbs and small towns. Police brutality is only part of  what draws Detroit protesters. There are signs and speeches railing against institutional racism and widening income inequality. 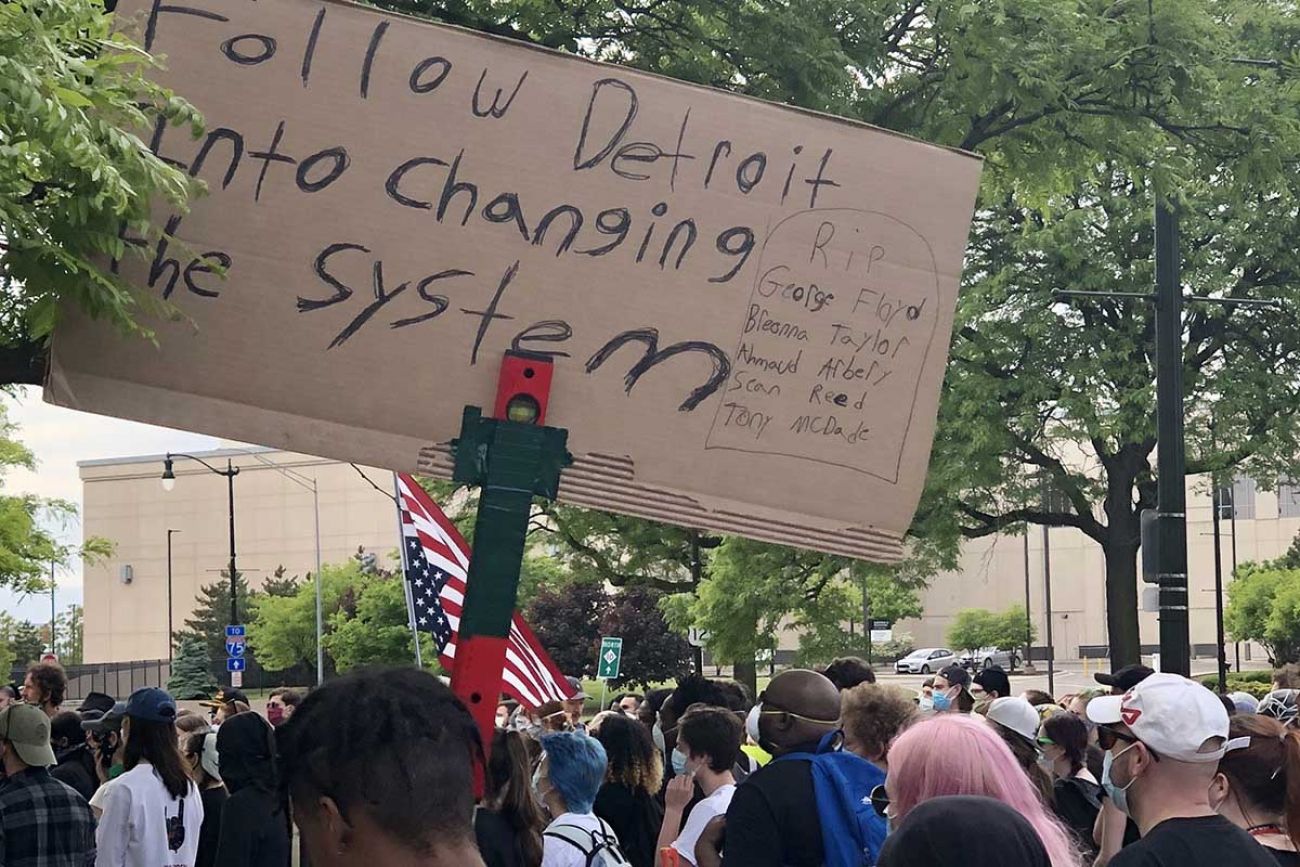 On Monday, a 16-year-old black Latino, Stefan Perez, emerged as a leader.

Perez said he is of black, Mexican, Nicaraguan and Puerto Rican heritage. Early on, he held a sign that said “Stop ICE Terror”, referring to the hardline tactics toward immigrants by the U.S. Immigration and Customs Enforcement. The federal agency has faced withering criticism by human rights advocates for separating children from families, the policing of southwest Detroit and the overall treatment of immigrants.

Perez also affiliates himself with a group called By Any Means Necessary.

During the miles-long march, he continued to urge protesters to remain peaceful. At the end,  marchers could see a blocks-long row of police in riot gear. Perez was one of the young people in front of the crowd screaming at the several hundred protesters to walk away from the police. And they did.

As Perez talked to reporters on the street after the march, he got a call from Mayor Mike Duggan.

“When I was watching the videos of your leadership tonight, I had tears in my eyes,” Duggan told Perez, who put the call on speakerphone. “You are everything that’s special about the city of Detroit.”

The teen told Duggan: “I am not going to lie to you, though, I’m still going to be out here protesting peacefully.” After the march, Perez took a bus back to his southwest Detroit home.

Organizing is part of the history of Detroit. It is the home of the labor movement, the largest NAACP chapter, the birthplace of the Nation of Islam, and in 1963, Dr. Martin Luther King Jr.’s Walk to Freedom drew 125,000 people and is known as one the largest civil rights demonstrations in the nation’s history.

The current president of the Detroit chapter of the NAACP, the Rev. Wendell Anthony, recalled an incident in 2000 when a Black man died from a chokehold by a security guard at Fairlane Town Center mall in Dearborn.

“Seven thousand of us marched in Dearborn. We didn’t break a window, we didn’t burn a car, we didn’t throw a molotov cocktail, we marched,” Anthony said during a Sunday news conference with Duggan, Police Chief James Craig and other civil rights leaders.

“We believe in marching,” Anthony said. “I’m proud of the young people who are marching, protesting.  It’s good to see young whites, blacks, Asians and Hispanics and Arabs and Jews marching together for justice. They are also marching for peace. They are not trying to do this to  tear the city up. They are marching because an injustice has been performed.”

On Sunday, the city announced a curfew as police officials and the mayor urged protesters to remain peaceful. Officials shared information on arrests and said outside agitators were part of the reason gatherings turned violent.

The fourth day of protests began with the establishment taking a hard line. A second night of curfew had been announced a few hours before the 4 p.m march. 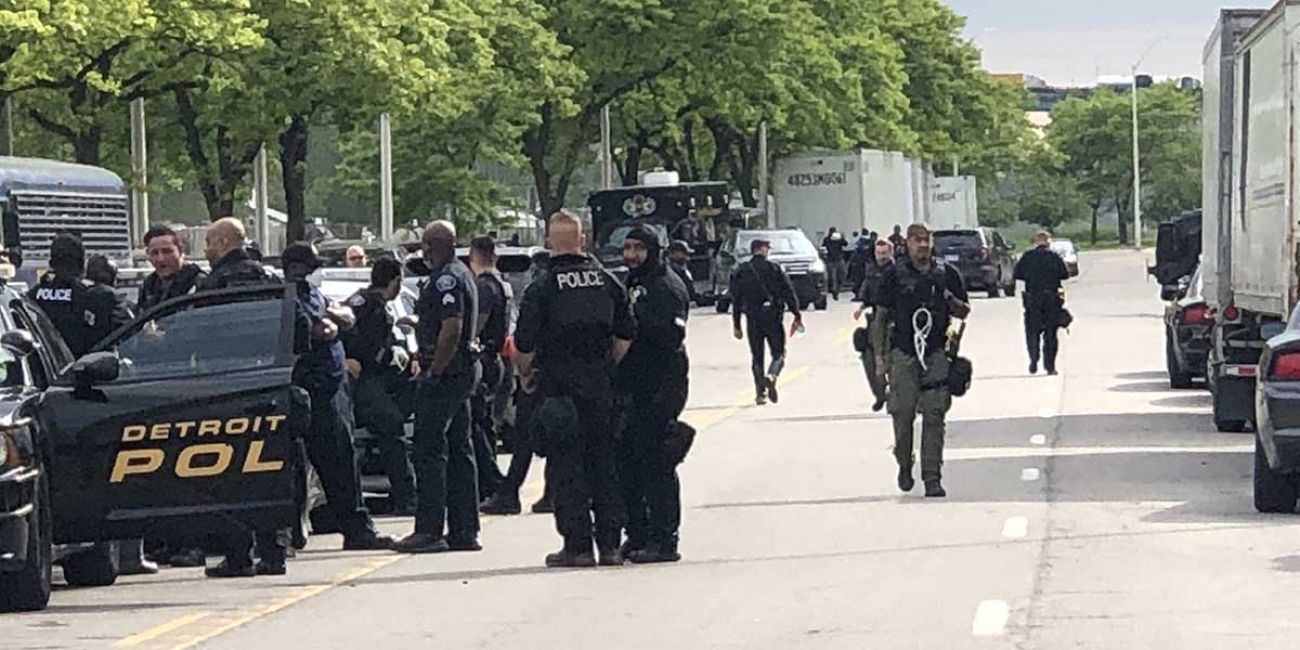 A small group of protesters are coming to spark violence, contended Duggan and Craig during a Monday news conference. Craig held up a rusty railroad spike to show one of the items confiscated from someone arrested during the Sunday protests.

Protesters use walkie-talkies to communicate during the events and have “supply vehicles” with “rocks, bottles and fireworks,” to throw at police, Duggan said.

Williams contends activists don’t want trouble but are insistent on “rapid change.” He called for the end of mass incarceration, release of all nonviolent offenders, and an end to the ICE system.”

“That’s why I originally had the protests at the police station because we wanted black and brown children released with no charges.”

The Detroit Police headquarters — the meeting point of the marches — had been barricaded for the first time on Monday for the event. As protesters assembled at the corner of Michigan Avenue near police headquarters, hundreds of police and fire department personnel were assembling at nearby West Riverfront Park. 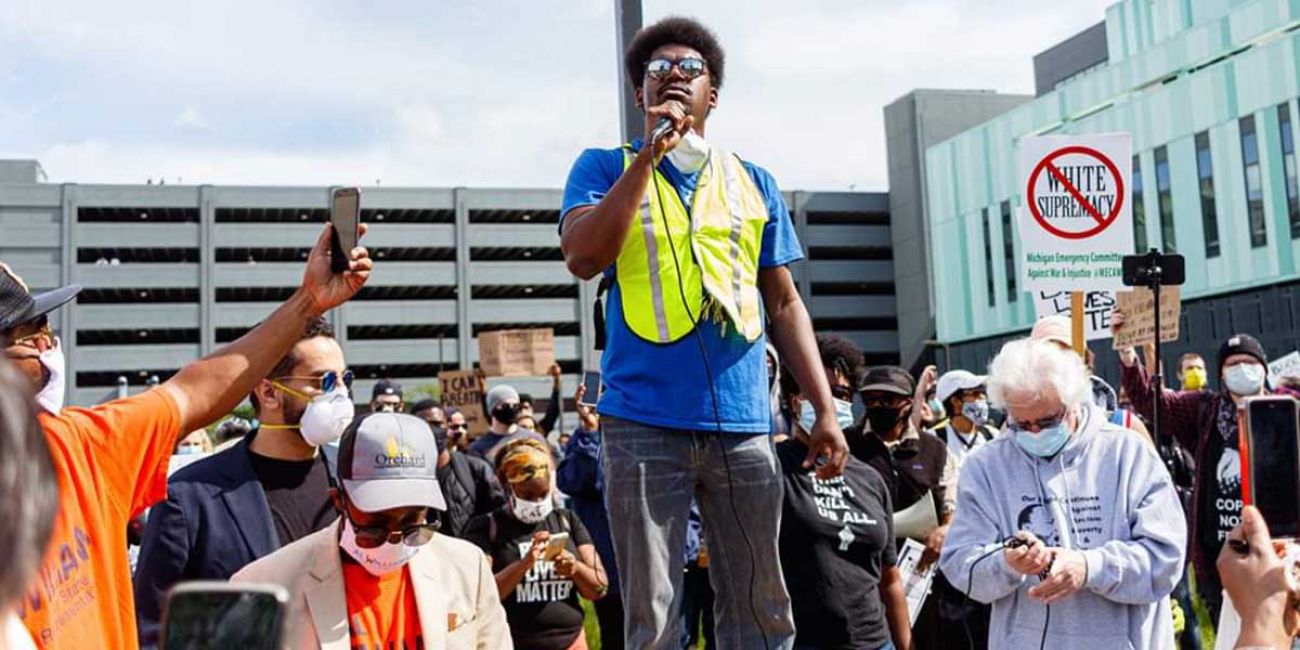 Speaker after speaker at the Monday event extolled nonviolence and a need to focus on the issues facing Detroit.

“I understand there are people in the Detroit police who need to be talked to and need to be handled. Because I’ve seen unnecessary aggression among some of them, but not all of them,” said a Detroit resident who wanted to identify himself by TT Gawd.

He told the crowd how he tried to stop violence after the Saturday protest.  “I was up front trying to talk to a bunch of young black kids who got riled up by a white male to fight the police. And then he vanished and the black kids got arrested,” Gawd says.

“I got pepper-sprayed and got tossed in the ground. I understand rioting in Minneapolis, but not in Detroit. We don’t need it here. We’re just coming back from that right now,” he says. The crowd erupted in huge applause.

Even amid the worst moments of violent clashes, there are many social media videos of young people stepping up to play the role of peacemaker.

On Saturday night, several young black males stood up to protesters hurling rocks at the windows of the Nike community store on downtown Woodward Avenue. The store windows remained intact.

During the Sunday night standoff, multiple people walked between the line of police and protesters urging non-violence. Those pleas failed as some protesters began to hurl objects and fireworks toward the cops and the cops aggressively responded.

The Rev. Maurice Hardwick, senior pastor of Power Ministry’s Church, is among the Detroit faith-based leaders who have attended the protests. He tells protesters Detroit should lead the reform movement.

“We should be a model and an example. Let’s lead the way.” 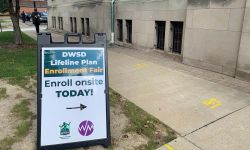