The state of the Detroit riverfront in 2021

Transforming the downtown riverfront and making it an inviting public space has been a decades-long goal for many. (Courtesy of Valaurian Waller)
June 3, 2021
Louis Aguilar
Urban Affairs
Detroit

Urban Affairs
The state of the Detroit riverfront in 2021

Summer is officially a few weeks away. The pandemic lockdown seems so close to being over.

That means millions will soon head to one of Detroit’s most popular sites, the downtown riverfront area.

It’s been a decades-long goal by many to transform the riverfront into an inviting public space that also lures upscale housing and commerce. Much progress has been made in recent years, but deep concerns remain about polluters along the river, disputes over what to do with nearby historic properties, and major development plans that have not been revealed.

Here’s the state of the downtown riverfront. 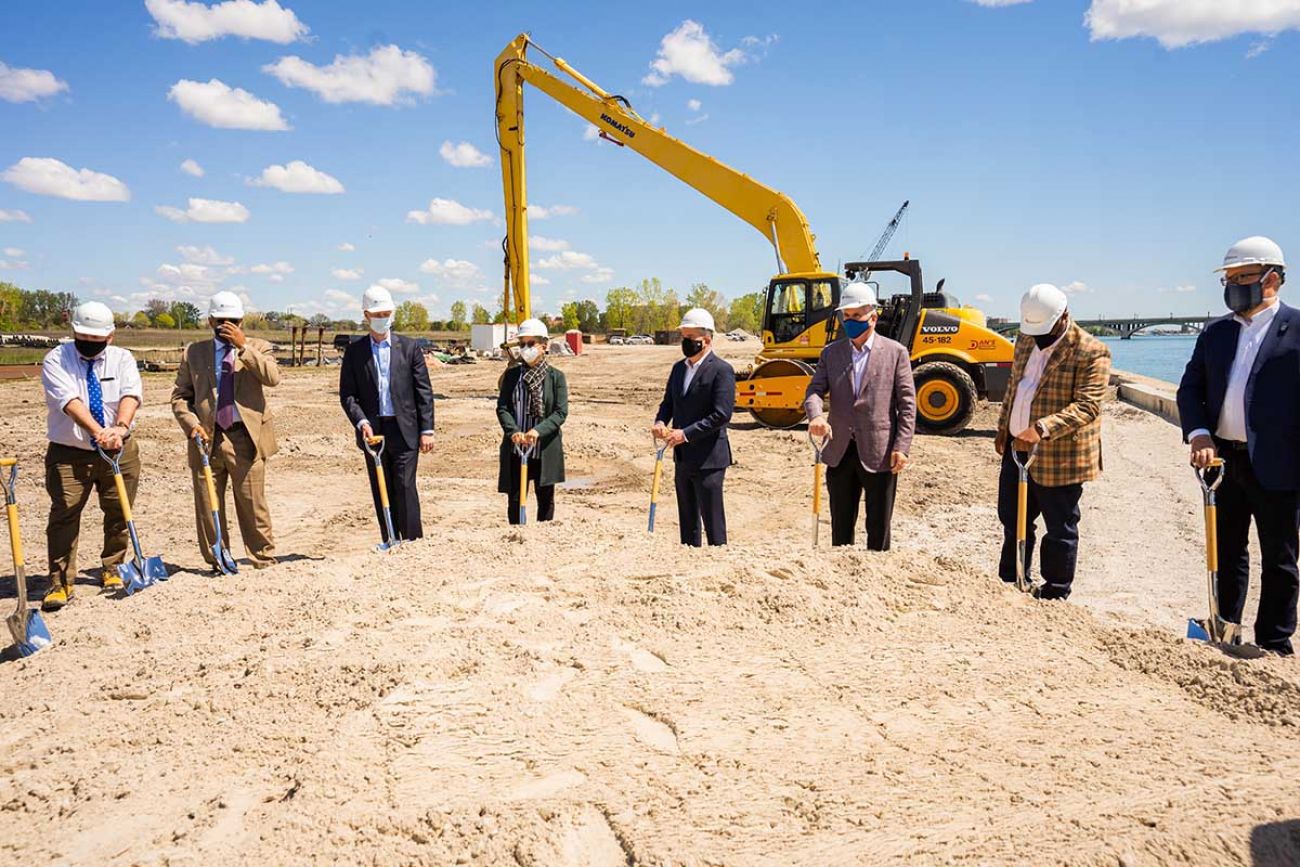 In early May, groundwork began to create a new link to the RiverWalk pedestrian/bicycle path, which draws 3 million visitors annually.  The link to the City-owned land known as the Uniroyal site will connect 3.5 miles of riverfront from Belle Isle on the east to just past the TCF Center on the west.

The Uniroyal site has been one of the most toxic threats to the Detroit River. For decades, a massive tire plant operated there. Prior to that, the site was home to a number of heavy industrial facilities dating back to at least 1860. Before work on the RiverWalk could begin, a 7-foot thick barrier had to be built to ensure toxins in the ground didn’t seep into the river.

The rest of the 42-acre site still awaits a solid development plan by a group that includes former NFL player Jerome Bettis. Read more about the site’s path to revival. 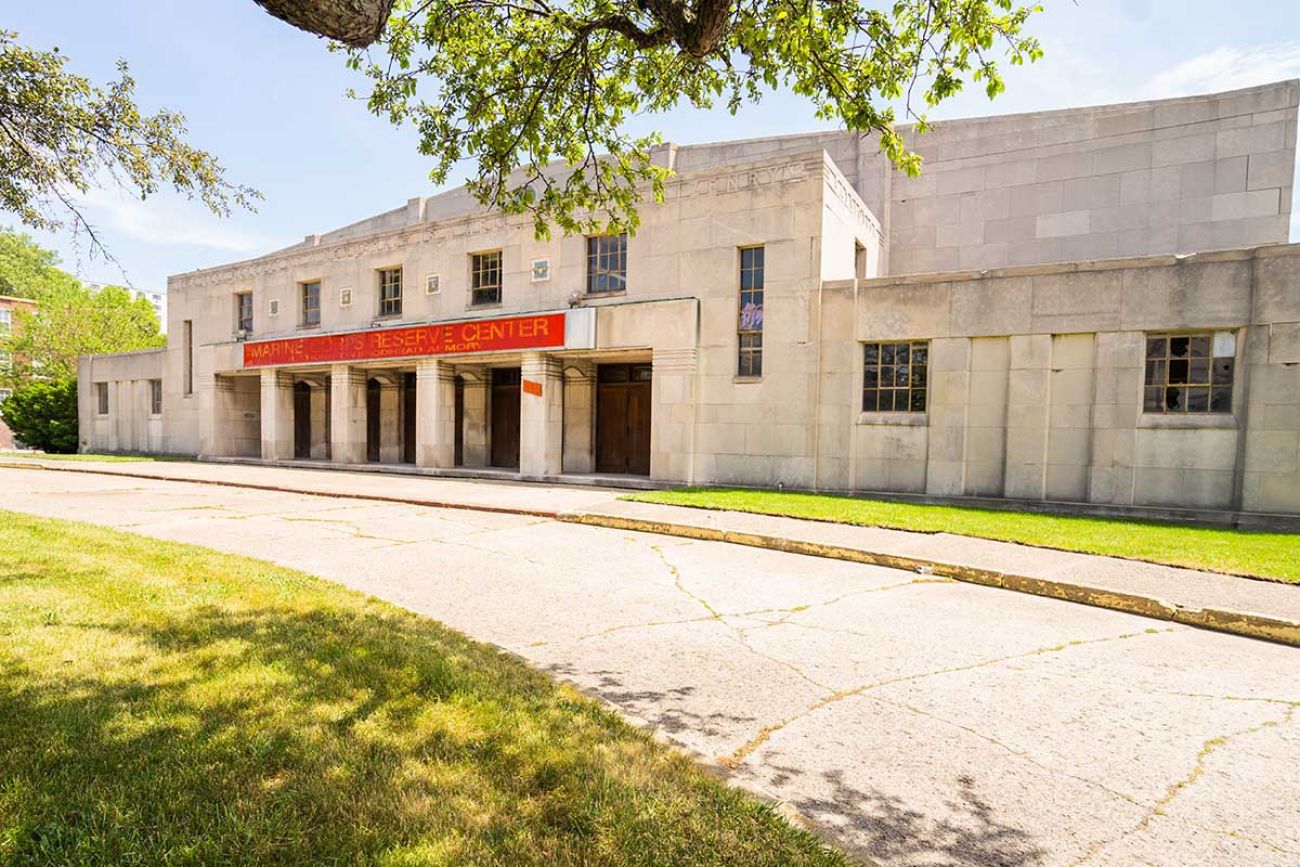 Just past the eastern border of the RiverWalk is a 91-year-old former Navy and Marine Corps facility. It has sat empty since 2004. Since then, scrappers have stolen much of the indoor furnishings. The facility includes historic WPA-era murals.

Now, there’s a controversial offer to sell the City-owned building to The Parade Co., the organization that puts on Detroit’s annual Thanksgiving Day parade. The potential sale faces resistance from some preservationists and military veterans. Critics question the $300,000 sales price and plans to raze part of the architectural gem.

The city’s master plan would also need to be changed to allow for redevelopment of the site.

The plan calls for restoring the front portion of the building but demolishing the back half that includes much of the surviving WPA artwork. The Parade Co. has said it would attempt to save whatever artwork it could if its plan is approved. Get a peek inside the Brodhead at this Historic Detroit link. 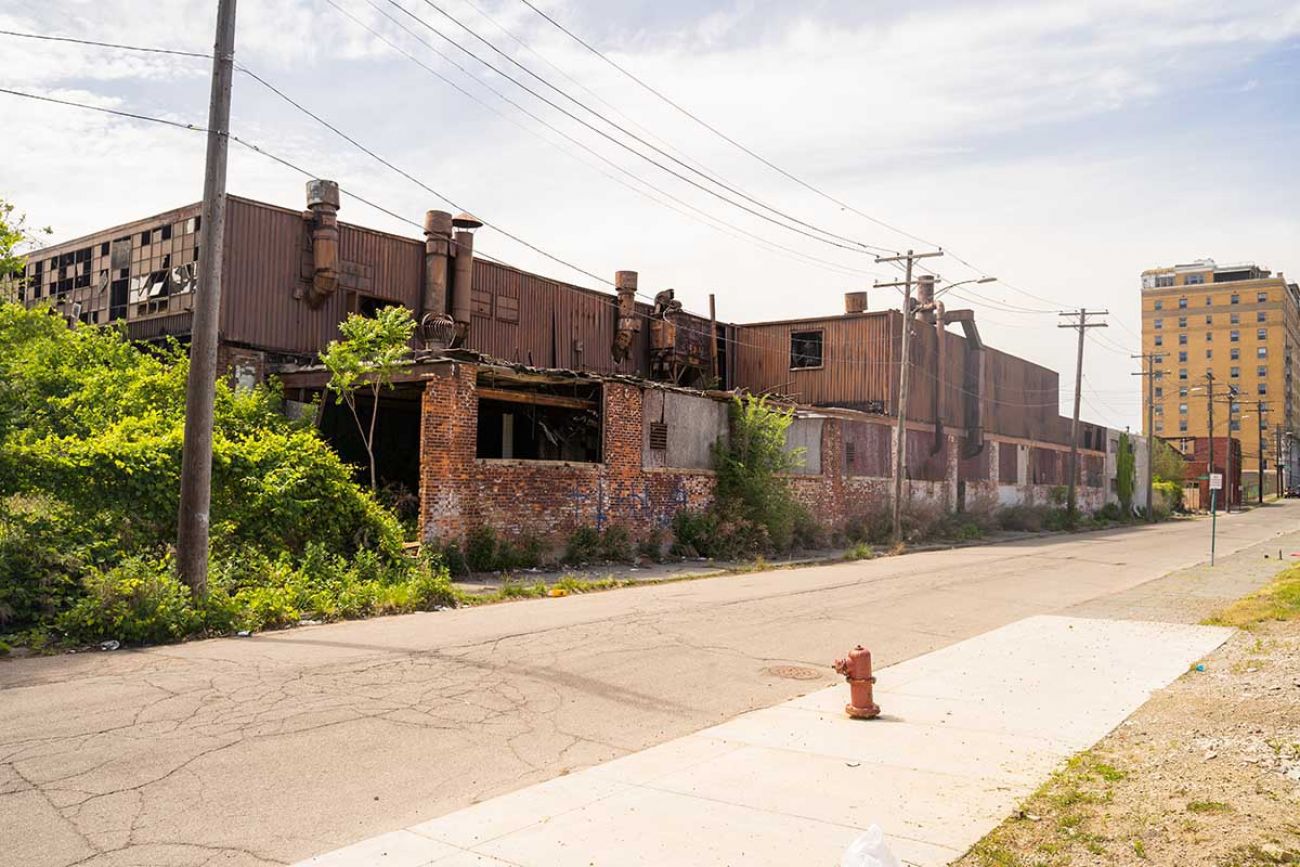 Much of the downtown riverfront has seen hundreds of millions of investment, from the GM RenCen to the blocks-long Orleans Landing residences. And recently, Dan Gilbert’s Bedrock LLC bought the massive 300 River Place office building, parking deck and about 4.4 acres of developable land along the riverfront.

But amid those developments, there remains a stretch of blighted buildings, including some that are falling apart. That area, sometimes called the east riverfront, or Rivertown, is where a botched city plan wiped out a number of businesses years ago.

In 1998, the City approved a $250 million deal to buy real estate on behalf of casino developers, who were poised to purchase the land and build along the riverfront. The deal eventually failed.

By the time the casino projects were scratched, the area had been ravaged by demolition and other building owners lost tenants. Lost were popular restaurants and clubs that included the Soup Kitchen, Woodbridge Tavern, Warehouse Club, Sauce, BC’s, Rivertown Saloon and the Rhinoceros Club. 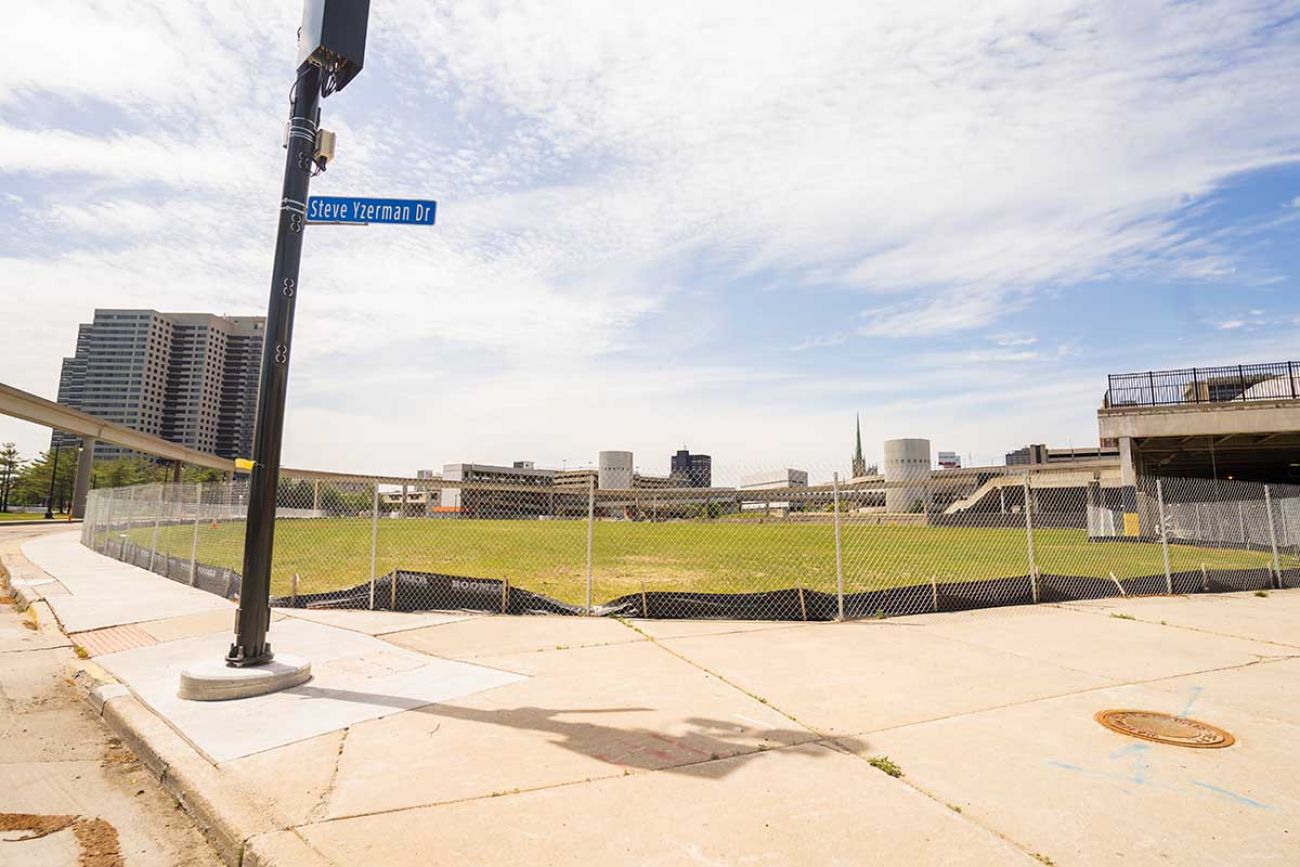 The site of the former home ice for the Detroit Red Wings awaits a new use. Demolition of The Joe finished months ago, and now it’s a flat, grassy field secured by a fence.

The 9-acre site was bought in 2019 for $14 million, along with the nearby parking garage, by an entity linked to the Sterling Group. That’s a development company founded by TCF Bank Executive Chairman Gary Torgow and now run by his adult children.

Next to the riverfront site is the TCF Center. The group sold the parking garage last year. Plans for the former Joe Louis site remain unclear. 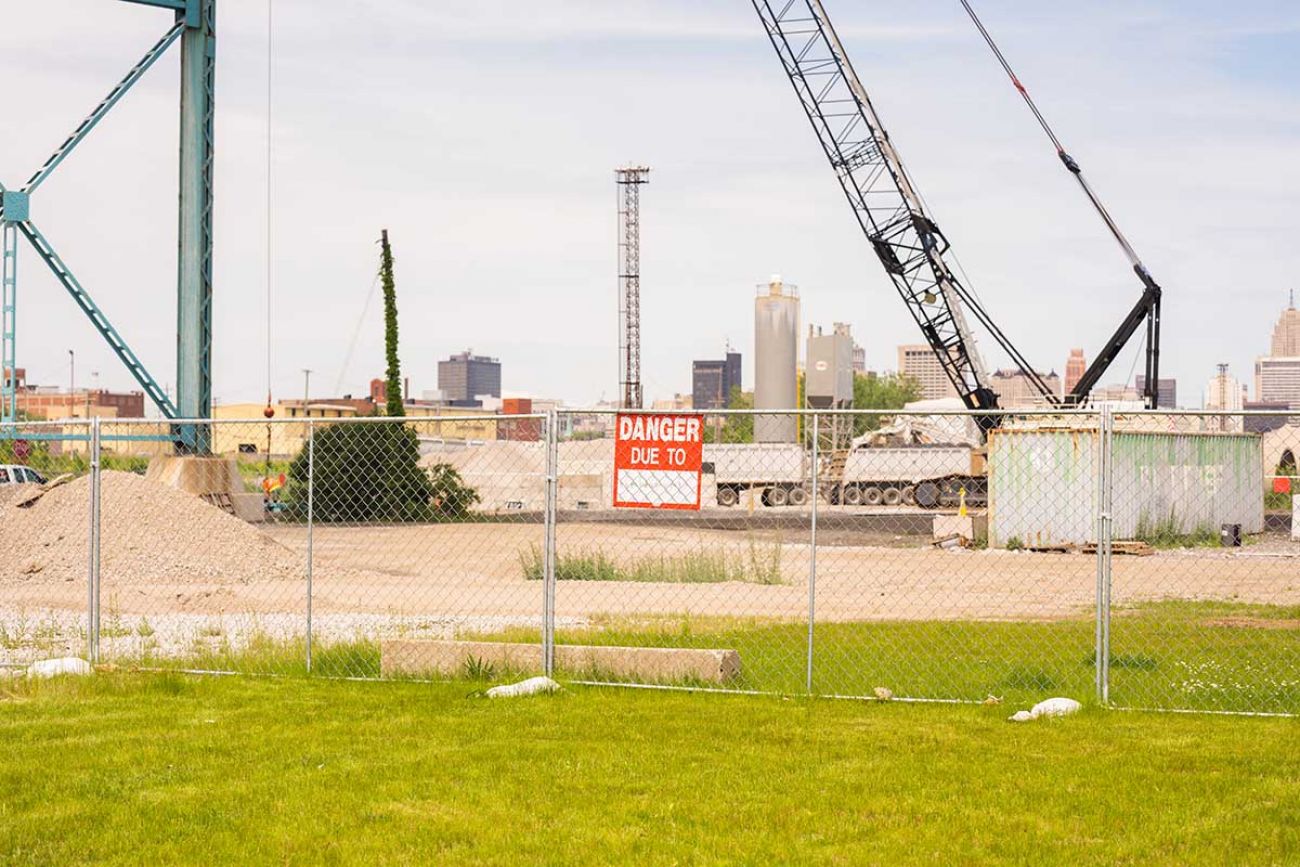 Commercial and operational sites like the 2700 block of West Jefferson Ave. have repeatedly been fined by the City for having unsafe seawalls, which are barriers meant to prevent toxic ground material from flowing into the river.

The City Council is studying a proposed ordinance that would increase inspections of seawalls, along with other measures. To read more about that effort, read this BridgeDetroit story. 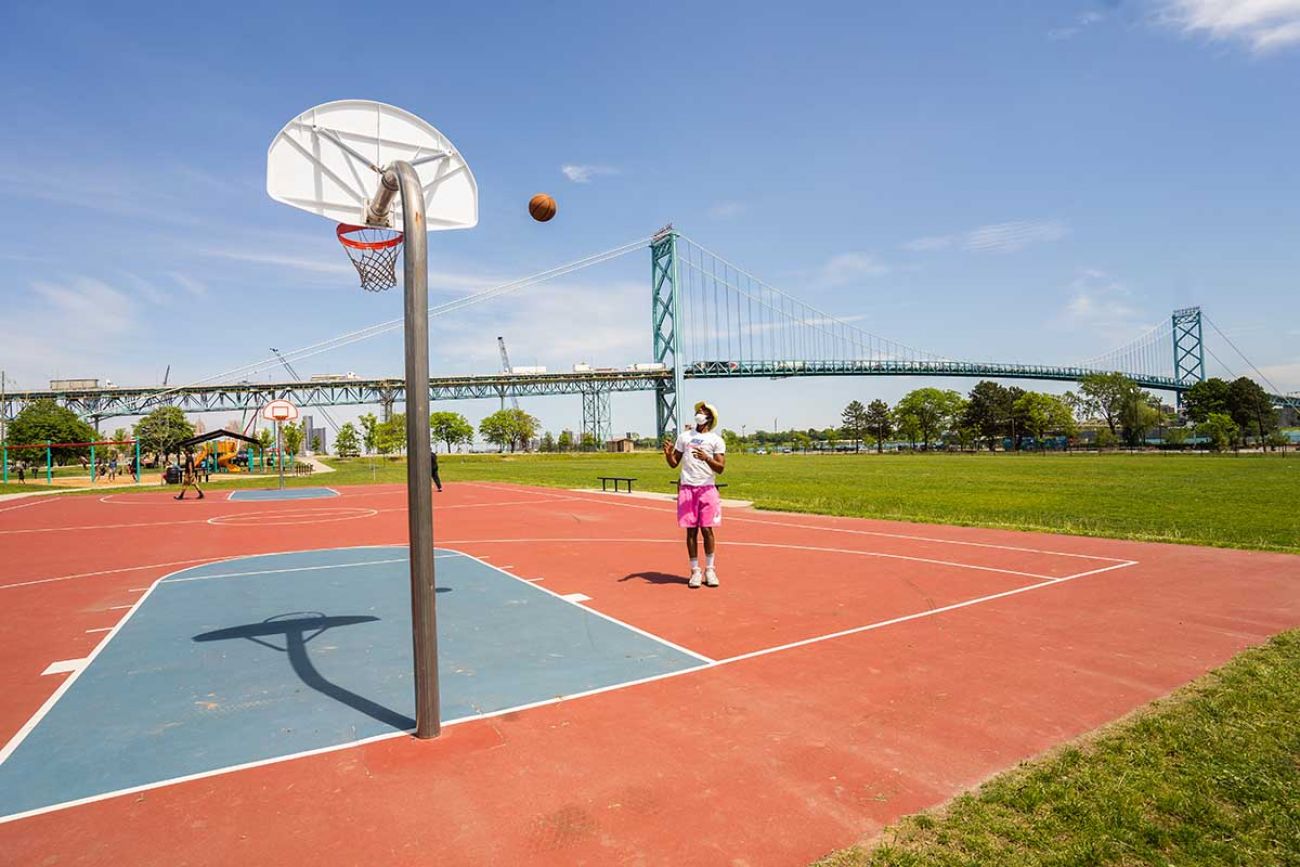 The RiverWalk hopes to eventually link to the southwest Riverside Park. The park has been getting an overhaul and expansion thanks to a 2015 controversial land deal with the billionaire owners of the Ambassador Bridge. The 29-acre park at the foot of West Grand Boulevard has a skate park, the city’s largest dog park and a boat launch.

The upgrades would not have been possible without a land swap deal between the bridge’s owners, who traded the City land for the expanded park and paid for some upgrades. In exchange, the City gave the bridge owners riverfront land that keeps the bridge company’s hopes alive of possibly building a second privately owned span. The Ambassador is owned by an entity controlled by the Moroun family. There have been decades of legal clashes over the expansion of the Ambassador Bridge, plus an ongoing multimillion-dollar effort by the Morouns to kill the Gordie Howe International Bridge, and many battles over the conditions of properties, particularly in southwest, owned by entities controlled by the Morouns.