Ford announced 3,000 job cuts on Monday, most of them in Michigan. But back in June,  the company said another 3,260 jobs would be coming to the state.

The numbers are similar, but it’s the type of jobs lost (salaried) and gained (factory) that is striking — and troubling — to experts who believe that Michigan’s economy needs to attract more knowledge-based jobs to thrive.

This week’s cuts amount to roughly 8 percent of Ford’s salaried workforce in the state. It’s the latest indicator of how Michigan’s second-largest public company, valued at about $60 billion, is realigning operations and staffing to compete as an electric vehicle producer.

The battle isn’t just Ford’s: The state is fighting to retain all aspects of automotive manufacturing plus attract the new elements, like large-scale battery plants, to remain competitive during the massive industry shift to electric vehicles that will cut the number of gas-fueled autos to less than half of the North American market by 2030.

Along the way, more automotive job cuts are likely. But when they happen to high-wage salaried workers, like at Ford this week, it’s troubling, said Lou Glazer, CEO of Michigan Future Inc., a nonprofit think tank focused on increasing Michigan’s knowledge-based economy.

“People need to understand that losing 3,000 knowledge workers in the auto industry is not good for Michigan,” Glazer said. It’s “just like losing a battery plant.”

The electrification of the auto industry means Michigan’s automakers need to push for job growth among professionals — like software developers and electrical engineers — not just for their own viability, but for the state’s economic health, said Glenn Stevens, executive director of MICHauto, an initiative of the Detroit Regional Chamber to advocate for the industry.

Stevens said Ford has been open that it will need to cut its North American workforce, which totals about 30,000 salaried employees, at least 85 percent of them based in and around Dearborn. Another 25,000 work in manufacturing in the state.

“Nobody likes to see any jobs eliminated at all,” Stevens told Bridge Michigan.

But auto companies “understand the hyper-competitiveness of things in the global market …but now you have this EV race that's on and so they can't do anything but execute for what they believe they need to do to grow and survive and thrive for the future.”

The industry changes aren’t just to the propulsion systems, Stevens said.  Digitization and the role of software will be critical. So will where those employees are based, and it’s not a given that Michigan will be that place.

“The leadership of these (auto) companies is extremely laser-focused on the bottom line and making sure that they execute (EV changes in) ways that we probably have never seen before,” Stevens said.

That means, he said, “making big bets on things like electrification and making hard decisions on how to organize the company for long-term viability.”

Overall job growth in Michigan remains important to the state, where median household income today is $63,829, a 7-percent drop since 2000 when adjusted for inflation.

In the past two decades, the number of factory jobs in Michigan has dropped 42 percent to about 47,000 people. Job gains have come in sectors like professional services, health care and finance.

Job growth still matters when it comes to battery factories and other production, Stevens said, even as starting wages are now less than $20 per hour.

“We are still a heavy manufacturing state. And those jobs, whether they're assembly line jobs or supplier jobs, or even Amazon warehouse jobs, are important to their communities and for us to grow,” Stevens said.

But, he said, to raise the state’s median household income “we're going to have to have more knowledge-based jobs” from the auto industry — roles like research and development, engineering, design and testing, all of which are high-paying. At Ford, half of its salaried positions pay about $120,000, according to Comparably recruiting and corporate branding company.

Hanging in the balance for the automakers, Stevens said, is their own viability. Funding the EV shift requires billions in investment while they face new competition from new companies that never produced traditional autos.

While the layoffs will affect southeast Michigan’s economy and the workers themselves, the automakers are acknowledging that moving their businesses forward will require different sets of skills as the industry relies more on digital elements and less on mechanicals.

“They're going to need different talent than they've ever had before,” Stevens said. “Growth is going to be based on research development, engineering design and testing.”

One visible example comes from Ford: The automaker is renovating the former Michigan Central Train Station in Detroit’s Corktown neighborhood, adding new buildings along with restaurant and event space to create a tech campus. Among the changes will be 10 floors of office space for Ford and other auto-related businesses. The state is spending $126 million to support the innovation hub, which it expects to attract as many as 5,000 new knowledge-based workers, though it’s unclear how many would be considered new to Michigan’s workforce. 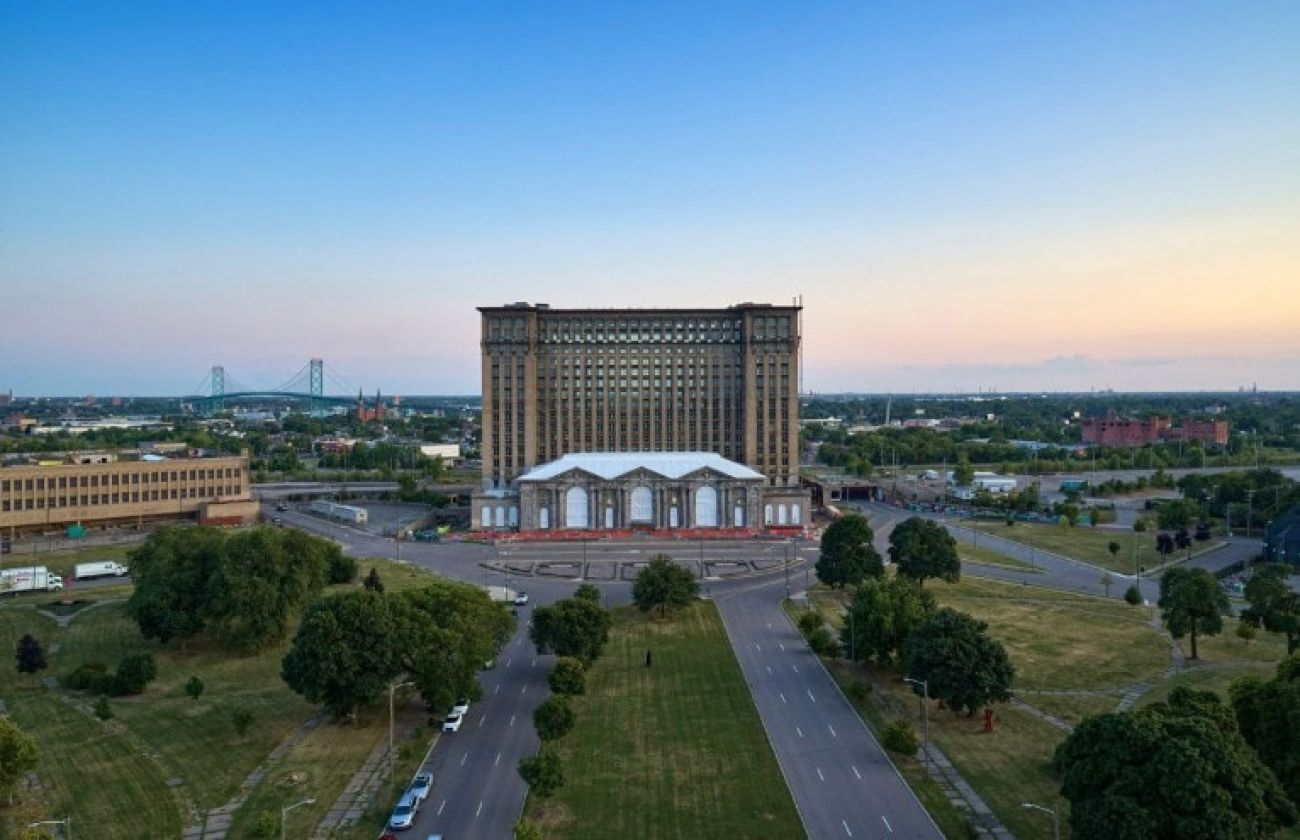 As many as 5,000 people from Ford and other companies could be working on mobility initiatives at the Michigan Central tech hub once the automaker finishes restoration of the former train station in Detroit’s Corktown neighborhood. (Courtesy photo)

The cuts this week at Ford include 2,000 salaried staff across many departments, spokesperson T.R. Reid said, from “product development through after-sales support of customers and everything in between.”

Another 1,000 contract workers assigned to white-collar roles in the company — but not Ford employees — also will lose jobs, Reid said.

The moves come as the company seeks to trim $3 billion in costs while it shifts its portfolio from legacy gas-powered vehicles to electric options.

CEO Jim Farley has told investors and media the company is overstaffed for the new configuration of three business units, announced in March as the Ford + plan. Ford Blue will focus on the internal combustion engine products, Model e on EVs and the Pro division on commercial fleet vehicles.

Farley, Reid said, “has talked about how we're in the process of effectively reinventing almost everything we've done for a century.”

Many in Michigan, including Stevens, said they recognize the difficulties Ford and other automakers face.

But Glazer, of Michigan Future, said Monday’s announcement should have been met with the same heightened concern expressed by state officials when Ford said last fall it would invest $11.4 billion in two EV battery and services campuses in Tennessee and Kentucky.

When that happened, economic development officials and bipartisan state leaders said the state had to make itself more competitive for the large-scale battery sites that came with billions in investment. One result was the $1 billion SOAR fund the Michigan legislature approved in December, funding incentives for “transformative” projects.

The same energy is needed to draw engineering and software professionals to Michigan, to make the state a place where young professionals can thrive. "The future prosperity of Michigan is tied to providing the mobility industry with the talent they need here,” Glazer said.

On Monday, Gov. Gretchen Whitmer pointed to the creation of the SOAR program in a statement to Bridge after Ford announced the job cuts. She noted that the state has secured an estimated $10 billion in projects with promises of 10,000 new jobs.

“We know the widespread impact that decisions like (Monday’s Ford cuts) can have on our families and communities, and we are more committed than ever to competing for every job and every dollar to build on our rich automotive legacy,” Whitmer said.

Among the jobs coming from SOAR fund investments are the 3,260 projected hires tied to manufacturing in five southeast Michigan factories that Ford announced in June. The state, in turn, promised $101 million in SOAR funding for the hourly jobs.

Michigan is “still the center of gravity for this highly competitive and evolving industry,” Affolter-Caine told Bridge.

Encouraging graduates to choose the industry and the state remains the goal of several state agencies, like the Michigan Economic Development Corporation (MEDC), and the URC, she added.

The MEDC  is planning to work with Ford to help workers who lost jobs, CEO Quentin Messer said in a statement.

The cuts underscore “that our work must focus on people and ensure that we are providing opportunities to connect talented friends and neighbors to Michigan companies who need them,” Messer said.

Unclear is how many of the workers will be retiring and how many will seek new jobs. Reid, the Ford spokesperson, said the company would not release information on years of service for affected employees or the dollar value of the payroll that it is eliminating.

Michigan’s unemployment rate in July was 4.2 percent, compared to 3.5 percent across the U.S., but “for now, momentum in the (state’s) labor market remains strong,” according to the economic outlook for this quarter, released this week by the University of Michigan’s Research Center for Quantitative Economics.

However, U-M economists also noted unemployment claims are moving up as people feel less confident about finding work, a combination that suggests “that peak labor market tightness is behind us.”

Next year, national unemployment is forecast by U-M to reach 3.9 percent.

Reid would not say whether more job cuts are planned soon at Ford, though it’s possible as the automaker continues to evaluate its needs.

“Good healthy companies are constantly looking at their business, what kind of skills they need more of, looking at skills, perhaps, they might need less of,” Reid said. “How that nets out over time, I don’t know.