‘Labor shortages are not going away’ in Michigan. Is automation the answer?

The decline in the labor force isn’t going to be solved soon, thanks in part the an aging workforce in Michigan. (Bridge photo by Dale G. Young)
November 17, 2021
Paula Gardner (Email)
Business Watch

Business Watch
‘Labor shortages are not going away’ in Michigan. Is automation the answer?

Michigan employers got a sign this month that the labor shortage that has left many scrambling to fill positions — and raise wages to attract workers — is improving, just in time for holiday hiring.

Still more hires are expected over the next few months, based on the last two months’ of national jobs data, which shows some workers slowly choosing to return to work.

However, global economists warn the competition for workers, particularly lower-wage hourly positions, is no longer a pandemic or a local issue. Instead, it’s forecast to last for years.

“Overall, labor shortages are not going away,” said Gad Levanson, senior economist with The Conference Board, a nonprofit business research group, during a global economic forecast presentation on Nov. 3.

Michigan already has been worried about that. Gov. Gretchen Whitmer’s MI New Economy initiative identified the worker shortage as one of the state’s biggest economic challenges, along with too-many low-wage jobs.

Keith Lambert sees the effects in greater Lansing, where he is vice president of business attraction at the Lansing Economic Area Partnership economic development group. He is trying to bring new jobs to Eaton, Clinton and Ingham Counties, while assisting local employers to grow.

However, that effort is taking place while the state’s workforce of 4.73 million has 190,000 fewer workers than in February 2020. Businesses from restaurants and retail to manufacturing and distribution companies are “struggling to find people to work for them,” Lambert said.

In towns like Charlotte, southwest of Lansing, that’s left locally owned businesses to struggle against the regional corporate businesses that can more easily raise wages to attract workers to that area of Eaton County.

And it raises concerns for the state as Michigan tries to lure large-scale development projects to add higher-paying jobs.

“If and when we’re to land (them), there’s going to be more pressure, more intensity about … how to make projects like that successful and have the talent to connect to those jobs,” Lambert told Bridge Michigan.

Nationwide, nearly 30 million Baby Boomers left the workforce in the third quarter of 2020, while surveys since then show as many as 75 percent of older workers plan to retire early.

“We have essentially no growth in the working age population for the first time in U.S. history,” Levanson said.

Other challenges for Michigan include:

In a labor force with fewer workers, boosting educational attainment and technological skills offer a chance to grow through innovation and efficiency gains, said Dana M. Peterson, chief economist of the Conference Board.

She noted that the labor force is also dwindling in Japan, western Europe, Australia and China — even as competition intensifies competition from India and sub-Saharan Africa.

State officials already are focusing on “upskilling” the existing workforce.

“One of the main concerns we continue to hear from business leaders and employers of all shapes and sizes is that there aren’t enough workers with the skills they need to fill critical vacancies,” Susan Corbin, director of the Michigan Department of Labor and Economic Opportunity, told Bridge, pointing to the $722 million budget recommendation to increase funding for post-secondary work skills education.

That investment, if approved, “will address our state’s skills gap and workforce challenges by providing opportunities for Michiganders to get access to the skills, credentials, apprenticeships and degrees that businesses need while providing a clear path into a good into a good paying career for workers.”

To remain competitive, Michigan small manufacturers should invest in Industry 4.0 automation and increasing flexibility for their workers, said Tom Kelly, CEO of Automation Alley. The nonprofit, based in Oakland County, advocates for more technology in manufacturing.

“Manufacturing has always had a worker deficit,” Kelly told Bridge. “That worker deficit got exacerbated by COVID and is going to continue to get worse. So you have no choice but to automate.”

Instead, Kelly said, “they're using the same playbook that they’ve always used.”

And the risk to them, as they try to hire unskilled workers at low rates, is that “those people that you need to do these jobs aren't coming back.”

Kelly said he’s trying to convince many small- to mid-size manufacturers to turn to robotics.

Prices have dropped and may cost tens of thousands less than hiring a full-time worker. With a robot, another worker may be able to accomplish the equivalent of two jobs — and the manufacturer will be able to maintain or increase production, and likely pay their workers more because of the additional skills needed to work in the higher-tech setting.

Beyond investing in equipment, Kelly said, employers need to recognize that they’re competing for workers with technology — in the form of apps like Lyft and Shipt. Creating flexible work could offer paybacks in a more stable labor force, he said, even if 40 part-timers do the work of 10 full-time employees.

“For the low-skilled worker, their attitudes have changed,” Kelly said. “Technology has taught them that they can jump in and out of the workforce whenever they want.

“Management needs to be thinking differently about how they solve the problem.” 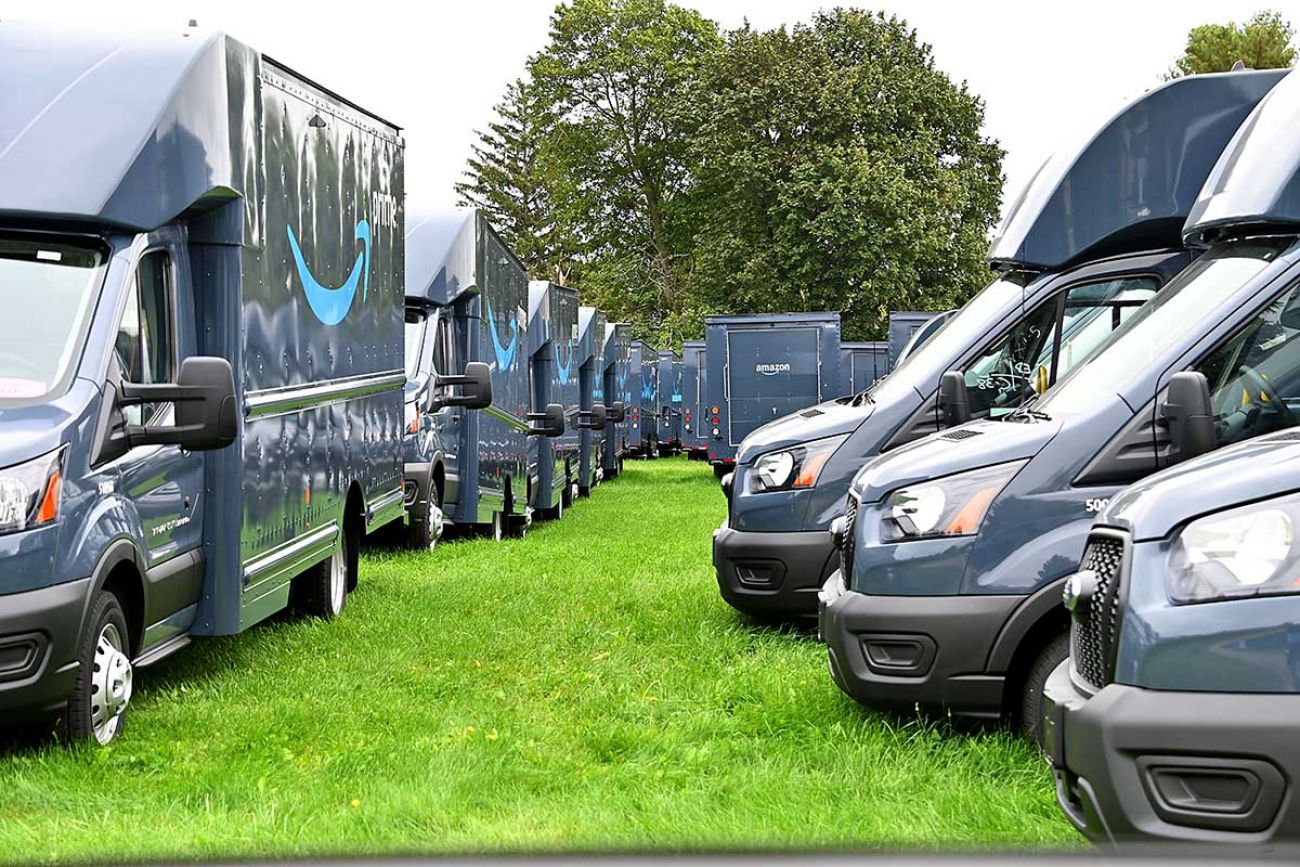 Amazon is an example of a large employer in Michigan who is turning to wage increases and bonuses to stay ahead of competition for workers. (Bridge photo by Dale G.Young)

Amazon is offering sign-on bonuses of $3,000 in some Michigan locations to stay ahead of the competition for workers. Starting pay nationwide averages $18.

And more jobs are coming — including to a new 1 million-square-foot  fulfillment center that will open in 2022 in Delta Township, a 20-minute drive from Charlotte.

But even today’s staffing won’t be all Amazon needs — or the end to the regional hiring competition.

Lambert said the company then will need 500 more people to work.  “So we expect the pressure to continue to be there.”

Economists are closely watching how pay increases play out. In the third quarter they set a 20-year record in the U.S., prompting concerns that inflation — which is also due to supply shortages, in addition to labor — will prompt an interest rate hike to cool the economy.

Even so, the national economy should increase 2 percent annually through 2031, despite lingering questions about the labor market and inflation, said Peterson from the Conference Board.