DETROIT — The North American International Auto Show opens this week with everyone from CEOs to union members and top U.S. officials to mayors, each eager to tell the story of Michigan’s place in the automotive world as it’s rewritten by electrification.

President Joe Biden was among the attendees Wednesday, when media preview day kicked off.

Biden spoke of America’s recent history of manufacturing job losses after dominating global gas-fueled engine production for almost a century. He said a reinvigorated industry can rebuild the economy into “a clean-energy economy,” one that can power the U.S. to lead in electrical-vehicle development, production and use, he said.

“We can own the future of the automobile market,” Biden said to a crowd of several hundred gathered in a Huntington Place auditorium.

Toward that end, the president announced the approval of $900 million in federal funding to build EV charging stations in Michigan and 34 other states. The money is part of a $5 billion, five-year goal to develop a national EV charging network.

The effort, which was included in the $1 trillion bipartisan infrastructure law approved in November, complements his plan to encourage EV purchases by offering tax credits for buyers.

That message is important to Michigan.

The auto show, which opens to the public Saturday, showcases new vehicles and other innovations heading into the marketplace. State officials look to the event as a way to attract new investments as competition dominance in electric-vehicle development and production intensifies.

“It's very important that this decade, we're positioning ourselves [to companies] that if you're going to do something to solve a major global challenge, start in Michigan.”

Even amid supply chain slowdowns and shortages in 2021, about 1.4 million electrifried and hybrid vehicles were built in North America. That figure will double in 2023, according to the Center for Automotive Research in Ann Arbor.

In contrast, gas-fueled autos were 84 percent of all auto production last year. That number is expected to fall to 77.2 percent by 2023 and make up less than half the market in 2029 as automakers embrace Biden’s national 2030 goal of having 50 percent of new passenger vehicle sales be electric.

Biden’s appearance dominated the return of the auto show to Detroit, where it was last held in January 2019 before the pandemic.

The focus on the president tilted the emphasis from vehicles even further from auto shows of years past, when new model unveilings took center stage.

Today’s show is downsized and diversified, in a nod to the innovation driving the industry beyond traditional cars.

Biden sat in a Corvette, steps away from new electric powertrains from a California start-up and the ICON A5 Amphibious Airplane.

Michigan Gov. Gretchen Whitmer and others touted recent federal efforts to boost funding that will aid the auto industry, including the $76 billion investment in the silicon chips industry. Companies in the state like Hemlock Semiconductor, SK Siltron and Calumet Engineering already are benefitting from the money, Whitmer said.

The Inflation Reduction Act, signed in August, also dedicates funding for further vehicle electrification as part of $370 billion in federal funding for climate and energy investments.

“And we’re just getting started,” he said.

Michigan’s share is more than 10 percent of that so far, Whitmer said, following announcements this year from General Motors, Ford and LG Battery Solutions. 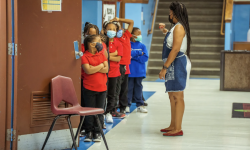 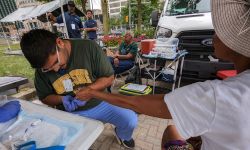