This story was reported by and published in partnership with MindSite News, a nonprofit news site devoted to reporting on mental health

Ronny Roby has seen more than his share of abusive parents interfering in youth sports. For 26 years Roby has been the park director and fill-in coach for youth football and cheerleading at Garfield Park in Grand Rapids. But an incident at a football camp he and his coaches were hosting late this June was especially chilling.

A mother with two sons in the football camp had heard secondhand that a coach had yelled instructions at her son. After swearing and threatening people on the sidelines, she called family members on her cell phone to demand they get themselves to the park and assault the coach. Roby ended up refunding the enraged woman her money and removing her and her sons from the program.

It’s far from an isolated incident: Coaches and referees across the country increasingly confront verbal and even physical assaults from parents. A 2017 survey by the National Association of Sports Officials found that 87 percent of the participants had suffered verbal abuse, 13 percent reported being assaulted, and 47 percent said they felt unsafe. Parents have also attacked each other, youth referees, and even players, including tripping teens on the field, shining a laser into a player’s eyes or knocking them over.  Racist catcalls, taunts and insults against teams of color from parents are also all too common.

Last fall, the father of a player in Vail, Colorado, sprayed a youth hockey coach in the face with Lysol. The mother of a player in Laurel, Mississippi, ambushed the umpire of a softball game for 12 year olds at a parking lot after a game this April and gave her a black eye. And in August 2022, popular football coach Mike Hickmon of Texas was shot and killed – in front of horrified children – after a game for nine-year-olds during an argument over the score. Small wonder that 80 percent of all new high school sports officials in the U.S. leave the field after two years, according to a recent study by the National Federation of State High School Associations.

“It is so bad with parents threatening and wanting to fight officials that we have a shortage of referees now,” Roby said. In fact, despite pay increases, there’s a nationwide shortage of youth sport referees this fall – something that experts attribute largely to a rise in ugly, embarrassing and sometimes violent behavior by sports parents.

As a result, what are supposed to be fun sporting events for youth athletes are often ruined by out-of-control parents stealing their children’s shine. It’s ironic, because youth sports can be one of the positive childhood experiences (PCEs) that help protect kids against the potential lifelong effects of childhood trauma and adverse childhood experiences (ACEs), according to recent research. 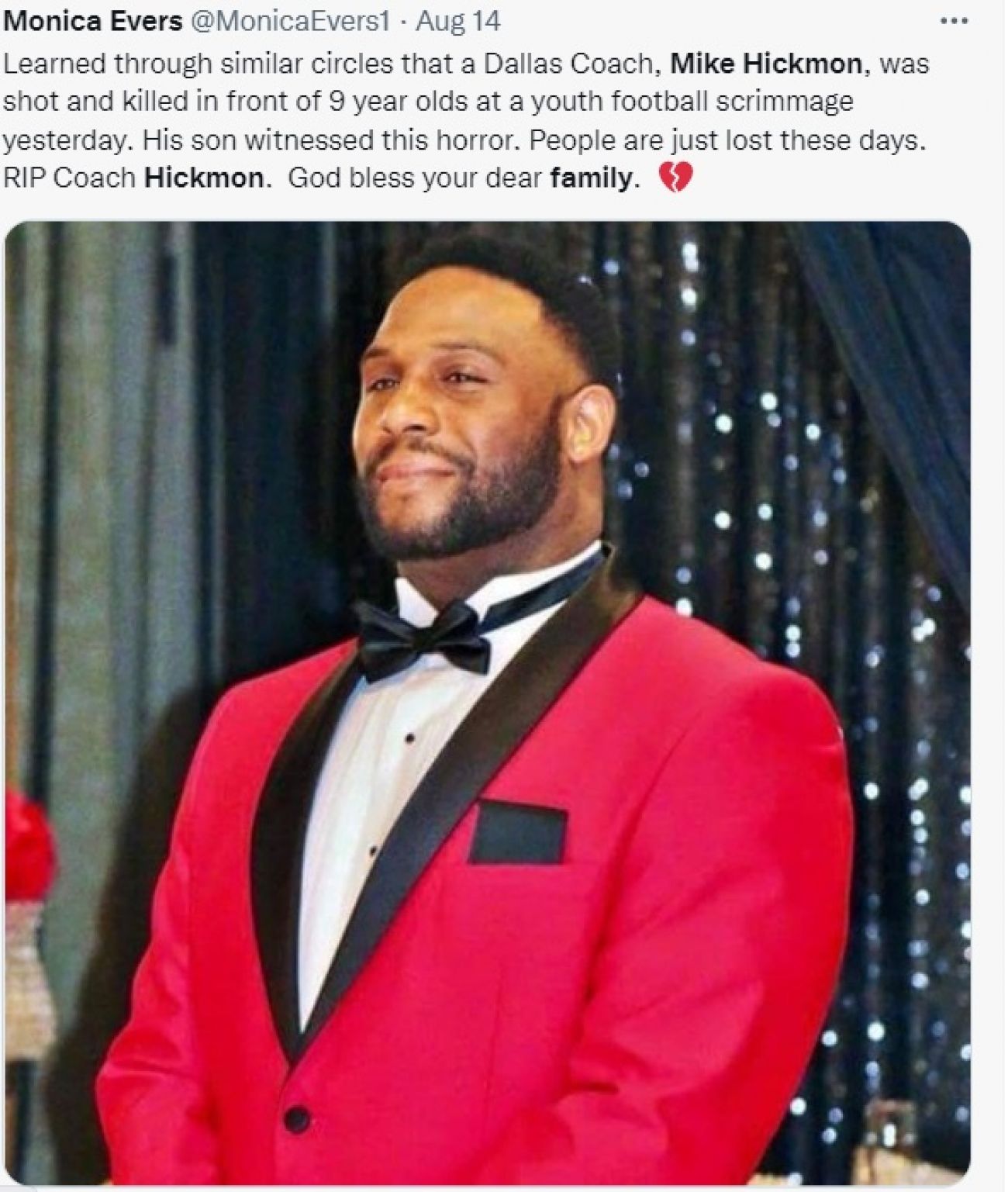 Coach Mike Hickmon, who was shot to death at a youth football game in Texas in August, in a tribute posted to Twitter.

Unfortunately, kids in the U.S. are quitting youth sports in droves, with nearly 70 percent dropping out before age 13 “because it’s just not fun anymore.” This trend, experts say, is largely due to too much pressure and the growing number of overzealous sports parents screaming insults at coaches and kids from the sidelines. In addition, relentless competition, year-round training, pressure to be number one and injuries are taking their toll. Instead of improving kids’ mental health, being on a sports team in these circumstances can actually be risky, with some young players reporting burnout, depression, anxiety and even suicidal thinking.

With out-of-control parents threatening players’ mental health and endangering coaches and referees, veteran coaches and coaching nonprofits are working hard to put fun, safety and good sportsmanship back in the game. 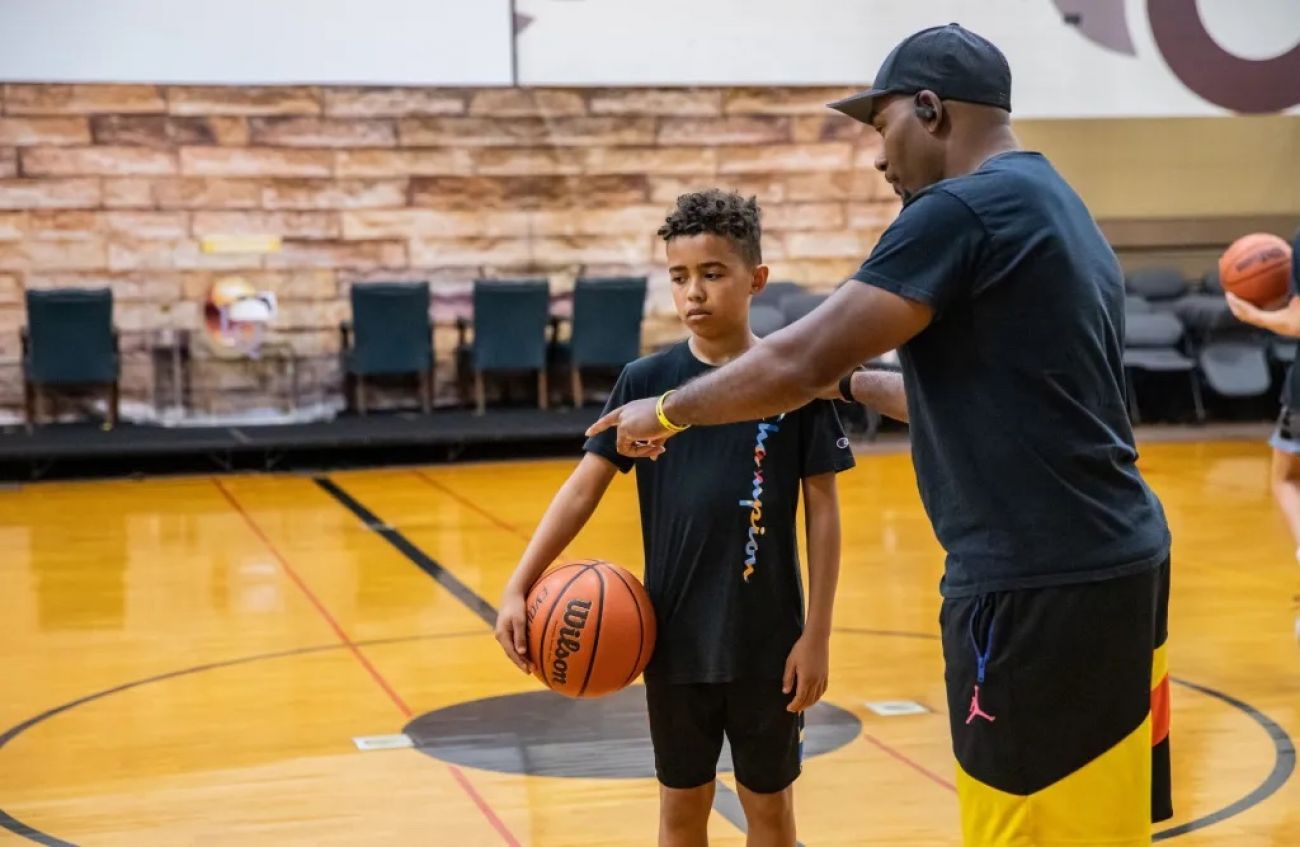 “Parents tend to try to coach from the sidelines and that frustrates their kid,” Michael Noble, the owner and founder of Noble Strong Training in Grand Rapids, Michigan, told MindSite News. Noble, who works with young athletes to take their game to the next level, said overinvested parents often overlook their children’s progress because they’re too focused on comparing them to their peers. Although the odds of any child becoming a professional athlete are tiny, observers say it’s common for ambitious parents paying $20,000 for their kid’s elite sports program to threaten coaches or rage over scores or penalty kicks – behavior that in a few cases appears to have trickled down to players.

The growing pivot to private coaching, uniforms, and elite travel teams has also left many families in the dust: Low-income kids and even middle-class kids and teens are ditching youth sports at disproportionately high rates because their families cannot find community-based recreational leagues or afford to keep them on elite teams, according to the nonprofit Aspen Institute’s initiative called Project Play. 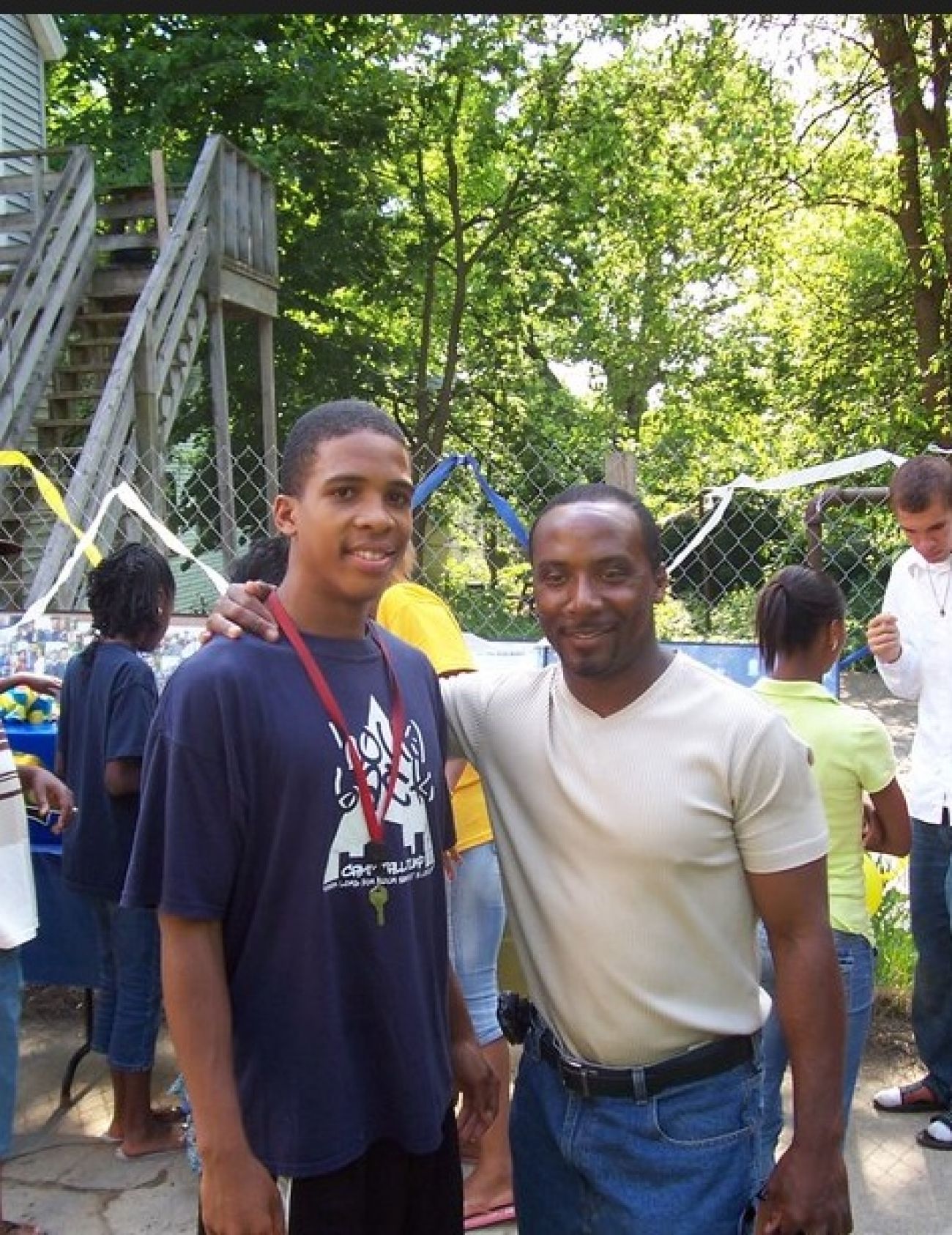 Longtime coach Alonzo McCully with a player in 2009 (via Facebook)

Alonzo McCully of Grand Rapids, Michigan, is an Amateur Athletic Union basketball coach for 4th graders who has been coaching his daughter and her friends since the first grade. He does it for fun and excitement, he said in an interview. As he knows, youth coaches and volunteers are often not paid for their job, and those who do get paid often say that the money is hardly worth the hassle they experience.

The real reward, he said, is seeing the players enjoy themselves: “When they’re not, it’s even worse than seeing the parents and coaches arguing.”

To help counter the extreme pressure many youth athletes and sports officials face, several national organizations are working hard to put sportsmanship back into the game. The National Alliance for Youth Sports – started by Fred Engh, the author of Why Johnny Hates Sports, in the early eighties – is a leading advocate for safe, positive sports for children.

“I got involved because I had kids of my own, and I was sick and tired of coaches and parents berating kids and reducing them to tears for little things like dropping a ball,” Engh told MindSite News. “Over the years I’ve seen and heard about some of the ugliest behavior you can imagine. One coach grabbed an 8 year old by the head and shook him back and forth. A father was recorded on camera threatening to beat his son when he got home if he messed up. Another dad ran out of the stands and punched his son right there on the field. In another incident, a man screamed “Aaron, you can never do anything right!” when his kid didn’t block a goal.”

Working with The Athletic Institute, a sporting goods company, Engh and his alliance began training volunteer coaches to put fun and sportsmanship back in the game –”and once we put our certification trainings on video, the numbers just exploded,” he says. Five years ago the NAYS created its National Standards for Youth Sports, training coaches, volunteers, and parents in the U.S. and abroad on how to create a safe, supportive environment for young athletes. 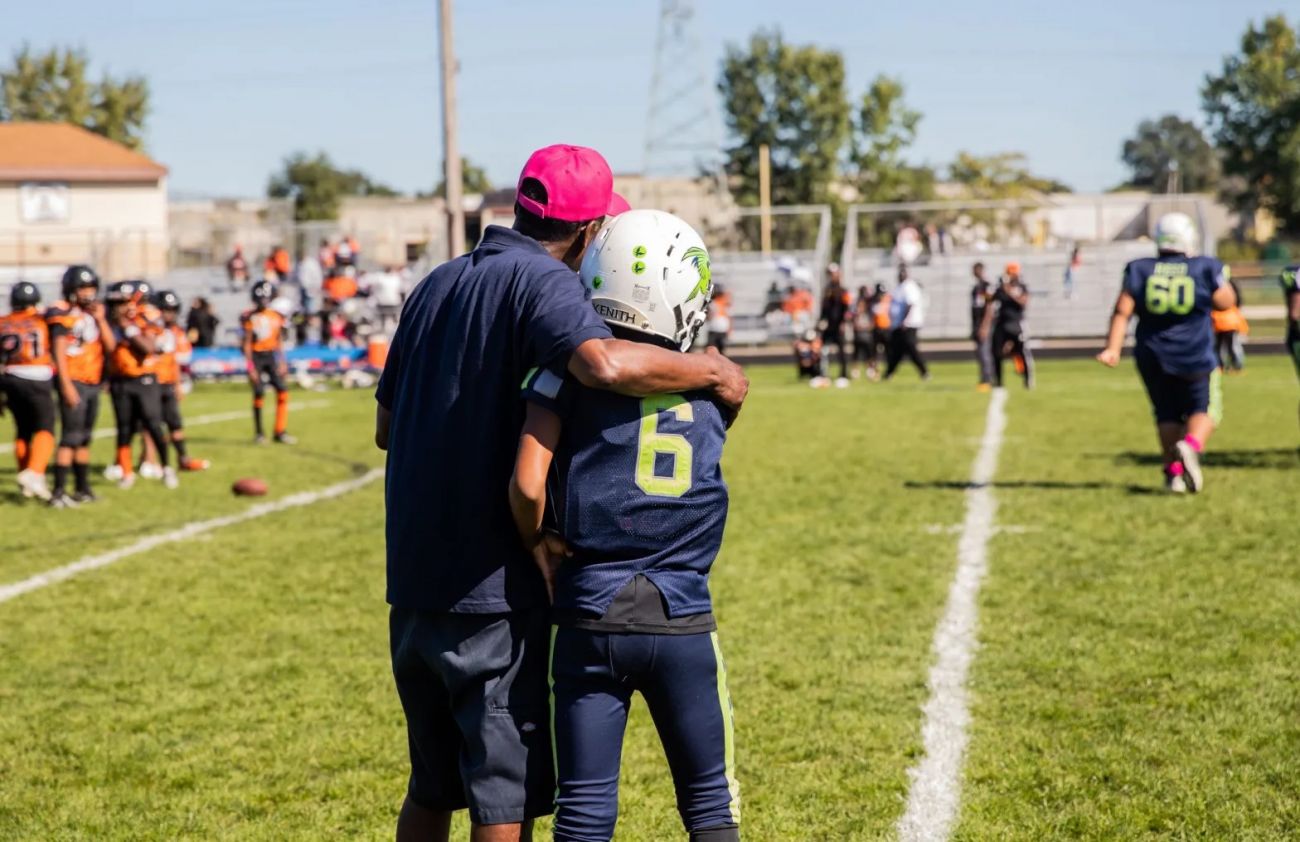 In Grand Rapids, Michigan, coach Ronny Roby gives a hug to one of his players during the 12u Falcons football game (Photo: Daytona Niles)

“Many adults have lost focus on what youth sports is all about – learning about teamwork and perseverance, adopting a healthy, active lifestyle, and, most importantly, having fun and making friends,” the alliance reports.

“Seeing a smile on the kids’ faces – that’s what it’s all about,” said Chad Rollins, 2021 NAYS volunteer youth coach of the year, in an interview with the organization. “I just want the kids to have fun. And If they see me, a coach, having fun, they’ll follow in those footsteps. They’ll grow up to love the game.”

Another organization, the Positive Coaching Alliance, was started in 1998 “to change the culture of youth sports so that every child, regardless of social or economic circumstance, has access to a positive youth sports experience.”

A national nonprofit, it reports that it has reached 20 million youth through more than 20,000 live workshops with 3,500 schools and youth sports organizations across the country that stress how you play the game is more important than winning. “You can win the game with the most points and still end up losing if you don’t do it right,” coach Nate Laety of the PCA said on behalf of the organization this July. The head of the Downington West Little League in Pennsylvania, Laety added that in youth sports “kids learn to be resilient and deal with adversities….It’s about how you carry yourself and succeed off the diamond and in life.” 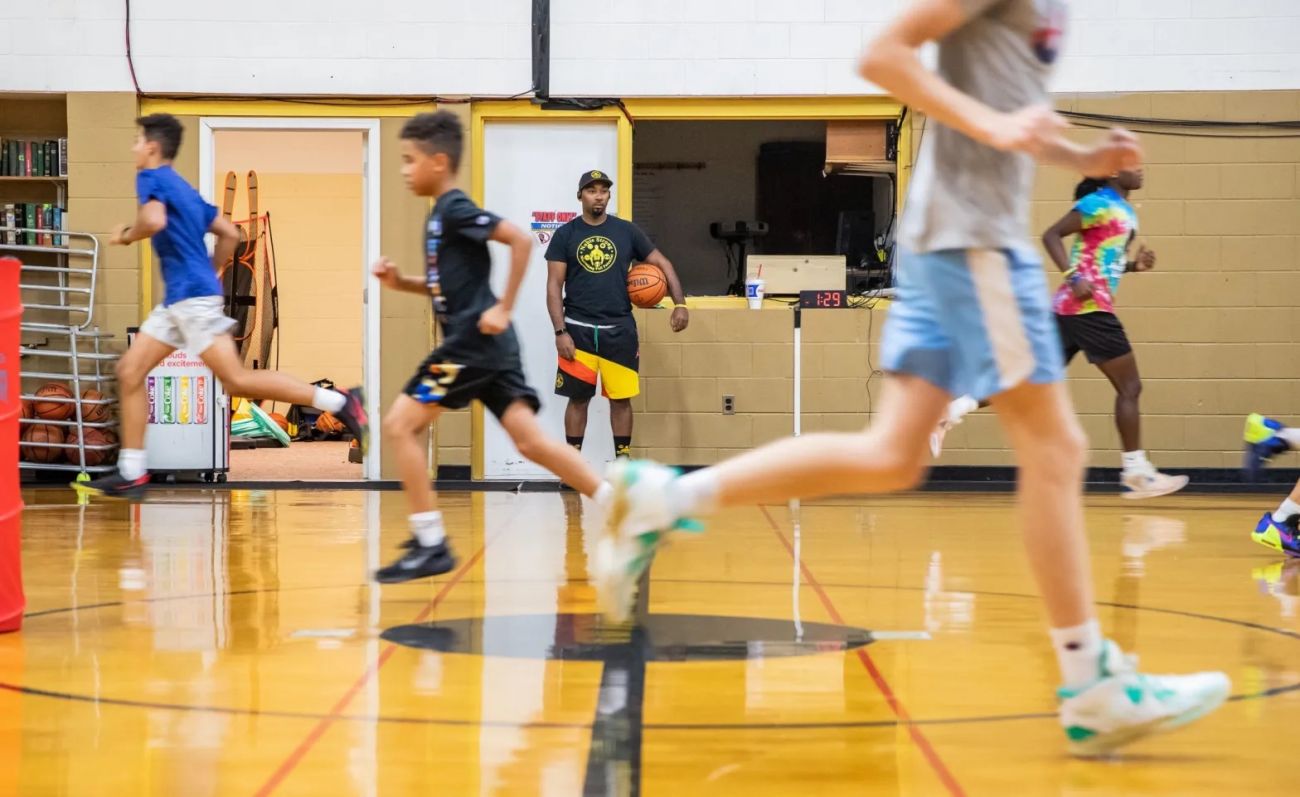 For their part, coaches in the trenches urge sports-obsessed parents to let their children forge their own path.

In Los Angeles, former FUNdamental Youth League (FYL)  coach Mike Spicer reminds parents that young athletes need some privacy and space to grow. “You have got to let the coaches coach,” he says. “You can always talk to your kids outside of practice.”

Coach Roby of Michigan agrees, advising parents not to stick around at practice. “Drop them off, let them be with the coaches for two hours and watch the difference,” he says. “Because when kids hear their parents constantly hollering, they shut down.”

Unfortunately, many parents are not taking that advice, with reports of verbal and physical fights at games climbing dramatically in recent years, according to NAYS. “Too many parents are living vicariously through their children,” says Engh. “They think it’s fine to go to the kids’ games and scream at them in a way that destroys their self-esteem. I’d like to tell them, maybe you should stop and think about why so many kids are committing suicide these days.”

“The only way we are going to stop this is to punish the people who can’t behave,” Engh concludes. “We’ve got to hold them accountable for their appalling behavior.”

– Heaven Jobe is a master’s student in the health journalism program at the University of Georgia’s Grady College of Journalism & Mass Communication. She received her bachelor’s in literature, language and writing from Eastern Michigan University. A youth sports enthusiast, she has coached, refereed and played girls/women’s lacrosse, and in high school she played varsity basketball, lacrosse, volleyball, and track. Diana Hembree of MindSite News, captain of her high school’s varsity girls’ gymnastics team in the distant past, contributed as editor. Photographer Daytona Niles contributed on-site photos on behalf of Bridge Michigan.