Mike Nystrom is executive vice president of the Michigan Infrastructure and Transportation Association.

Many groups across our state have urged Michigan governors and legislators, elected over the past two decades, to exercise leadership and pass a plan that will truly fix Michigan’s crumbling roads and bridges.

Michigan voters — who in nearly every poll say that fixing roads and other infrastructure is now their top concern — are also waiting for a solution from Lansing.

While we wait for the governor and legislature to work out their differences and hopefully arrive at a real solution, now is a good time to set the record straight on the debate. In recent months, media stories, websites, social media and other channels have included literally thousands of comments, questions and “solutions” about how to fix Michigan’s roads. Some have been fact-based, realistic and useful. Others, not so much.

Do we really need $2.5 billion more a year to solve the problem?  Yes. Every serious study examining the scope of Michigan’s road crisis has arrived at roughly that same number. No study has substantively disagreed with the number, and two studies say the amount is closer to $4 billion a year. Why so much? Because Michigan’s elected leaders have put off truly addressing the issue for decades. The governor’s proposal would cost the average Michigan motorist about $23 a month, or less than $1 a day. Her proposal would raise the revenues needed to solve the problem. If another proposal is forthcoming that will also solve the problem, we are eager to see it.

The taxes we pay at the pump don’t all go to transportation, so why should we support raising those taxes? This statement is partly true, but misleading. In fact, the state constitution requires all revenues from Michigan’s per-gallon tax on gasoline and diesel fuel go to transportation. Same for the revenues raised from registration fees on passenger and commercial vehicles. Because these revenues are protected by the constitution, the legislature can’t spend them anywhere else. However, Michigan is one of only seven states that also charges a sales tax on motor fuel, and the only state that doesn’t use any of that revenue for roads and bridges. The governor’s proposal would be constitutionally protected and must be spent on transportation purposes.

Use the money from state taxes on recreational marijuana to fix the roads. Pot for potholes has a nice ring to it, but it’s estimated that the state excise tax on recreational marijuana will generate about $24 million annually for transportation in 2020, or less than 1% of the $2.5 billion needed each year in order to return 90% of Michigan’s roads to good/fair condition by 2030. The pot tax will only fix about 21 miles per year of the more than 36,000 miles of Michigan roads in poor condition that must be fixed.

Even if we raise the funds to fix the roads, Michigan doesn’t have enough workers to do the jobs. Our members build Michigan’s roads, and they have plenty of available capacity. Most projects that go out for bid see multiple bidders who have the workforce to do the job. One thing is certain: if the legislature passes a proposal that truly solves the state’s infrastructure crisis with a guaranteed investment level, the economic certainty will incentivize road builders to take the steps necessary to attract, train and retain the necessary workforce. Any industry would react the same way to market certainty. 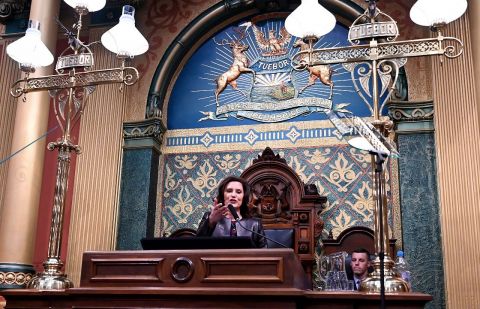 Michigan OKs $3.5B in roads spending. Much of it is going to Metro Detroit.

One day after Gov. Gretchen Whitmer announced she will borrow money for roads fixes, a state commission approves the measure that will send 40 percent of projects to southeast Michigan. 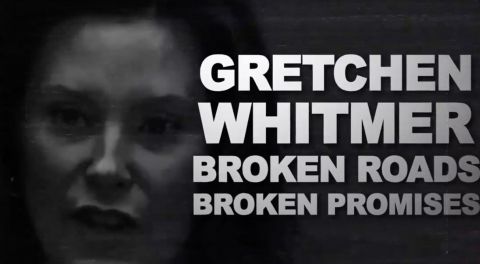 Is Gretchen Whitmer a hero for borrowing billions to fix highways or has she already broken a central campaign promise? Michigan Fact Squad investigates ads reaching opposite conclusions on the governor. 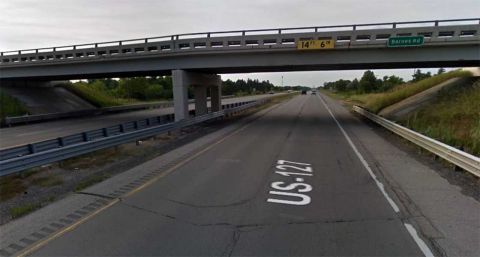 Driver hurt by concrete chunk. It fell from a bridge Michigan deemed safe.

Michigan has more than 447 bridges that are in rough shape. The piece of concrete that fell and injured a driver in Lansing on Thursday wasn’t one of them, compounding fears of crumbling infrastructure.

Of course the head of the trade group that benefits the most from Gov. Whitmer's gas tax would pen an op-ed in support of it.

Now, here are some questions that Mr. Nystrom wouldn't touch with a ten-foot pole.

When did it become the policy for MDOT (the people responsible for overseeing all of this largesse) to sign off on shoddy work?

State government has known for years that MDOT does an abysmal job of monitoring the work done on Michigan's roads. So much so, that in the most recent audit, 52% of road warranties were allowed to lapse without any action taken against the contractors for their shoddy work.

Try following through with only 48% of YOUR work and see how long YOU last in the private sector?

How long are roads now expected to last here in Michigan, Mr. Nystrom?

I-75 and I-696 were recently rebuilt around Detroit around 18-months and six-months ago respectively.

Road crews have been making "emergency repairs" earlier this year on I-75 and shutting down lanes on I-696... a road that we were told ALL work was completed several months ago when it was reopened.

I don't know about anyone else, but if I'm expected to fork over even more money (remember: Gov. Snyder and the republicans jammed through a perpetually rising gas tax hike and substantially increased fees at the SoS... this is after Proposal 1 went down in flames by the greatest margin in Michigan History), I expect a far better return on that "investment",

Speaking of the aforementioned $1.5-billion gas tax hike, why did you claim that the Michigan legislature did NOTHING for decades, Mr. Nystrom?

Did you believe that most Michigan Motorists have very short memories?

Chronic under-funding answers pretty much all of your questions. Next

And your solution is? What? You just list problems but zero on how to fix things - which means money.
The GOP approach - rant and then do nothing.

Obviously, you have missed my comments above.

Not that long ago, the republican party jammed through an unwanted tax hike which saddled us with higher gas taxes and fees at the SoS.

The problem here is not with money, but rather the devil-may-care attitude that politicians and bureaucrats have with how it is spent.

The means exist to build roads here in Michigan that will last for decades (see example above).

Instead, TPTB would rather create a crisis by signing of on poor workmanship and then cry about the fact that they don't have enough to spend.

Others people, like the author of this op-ed, obviously don't care about the amount of time and effort people have to work in order to fill their gas tank and put a license plate on their vehicle(s).

Same old repetitive tired "waste and abuse" style canard that wrecked the roads, the car industry, and the water.
You should be ashamed of yourself and your party.

well if they would of not built our roads with no bid contrats to the last three governors partners we would have good roads like the states around us and Canada!!! How come they are reparinf I-696 that was just rebuilt last year>>> Last no bid contract from Snyder! Just look at all the roads built before John Engler Like the Davison 60 years old before it was rebuilt, 5 years and it has pot holes,,, I-75 built in the 1960's will it last like I-696 has only one year?? The people of Michinga are getting sick on paying for roads that do not event last one year!!!!

Everyone knows the roads need money and fixing, but I feel the gas tax is a zero sum option and will hurt the poor more than others. Here is my reasoning:
1. All automakers are making huge investments into electric vehicles(Billions). Good for the environment good for less dependence on foreign oil, reduction in gas usage and therefore less tax revenue.
2. With the spike in gas taxes many who can afford to buy new electric vehicles to save on fuel expenses will switch. Low income households will be the last to afford this new technology.
I know I don't have all the answers but I this this way is a false hope in raising revenue.
Maybe changing the registration of vehicle from value to weight would be a way to capture some lost revenue.

Once again, Bridge has failed to inform its readers of any financial interests that its "guest" commentators or their employers have in the issue (or solution) in question. Is the "Michigan Infrastructure and Transportation Association" funded by transportation and road-building interests, by chance? That is a vital piece of information that we, the readers, must have before we can really weigh the value of what Mr. Nystrom has written.

And--FYI--on its website the Michigan Infrastructure and Transportation Association says that "We represent over 500 companies statewide who work on Michigan’s roads, bridges, underground and utility systems." Whatever its other virtues it might be, Mr. Nystrom's commentary seeks to advance his own self-interest.

By leaving it up to its readers to discover that, Bridge has (once again) let us down.

Mike did a very nice job explaining the need for real transportation revenue. The only thing he misses - and I’m sure it was the need to meet a word requirement - is that Michigan needs to find a better way to fund transportation needs in the future. With electric vehicles, hybrids and better fuel efficiency a fuel tax simply does not raise road funding like it used to. Additionally, if we care about our drinking water, what happens when we flush the toilet and the future of the Great Lakes, we have to begin focusing on broader infrastructure investment. Guess where Michigan ranks nationally on infrastructure funding? Of course, we are dead last!

The writer kept referencing "Transportation Funds" and the need for more. This is a government slight of hand, because the monies ARE transportation funds. 40% of these funds go to public transportation, not roads. The State just wants you to believe that with all increases you will be helping roads. We can generate more road money by stopping the subsidies for public transportation. And yes, I am a horrible person because I hate poor people, blah, blah, blah....

This was a good read. Too often the lobbyist is selling the snake oil but I found this informative and based on facts. As I was reading I was reminded of something my dad said back in the early 50s. A friend of his suggested they get in the business of orange barrels. He thought that a dumb idea at the time. I can see today that this will produce a real problem if and when we start spending real money on repairing Michigans roads. How to prioritize the work and maintain traffic flow.

Forgot to mention the $500-600 million in general fund dollars that were part of the plan put in place being diverted to education. Thus the net increase for roads is not the as advertised but is less this amount.