Climate change grips trout streams across the nation: How anglers are responding

The air is rich with the scent of wild river as David McCool sets his boat in the Au Sable River in northern Michigan. The early morning silence is broken only by an occasional bird call and the soft susurrations of the crystal clear water. It’s a river that Henry Ford and John Rockefeller fished, and a place Ernest Hemingway deemed “good stuff for essays.”

An angler of 20 years, McCool has done this more times than he can count. He never tires of the sensation. The clear waters of the Au Sable, which courses across 138 miles of northern Michigan forest, is one of the country’s renowned places to cast a fly. It’s a river so revered as a trout fishery that in 1959 a group of Au Sable fisherman formed Trout Unlimited, now the country’s premier advocacy organization to protect cold-water streams in Michigan and nationwide.

More than 60 years later, the river is ill. A slow emergency is brewing in the peaceful waters. Michigan’s unusually warm winter temperatures, followed by a historic drought and one of the hottest summers on record, are warming the Au Sable. When the water is warm, much of the trout population flee to the river’s tributaries, instinctively searching for oxygen-richer waters.

In other places, the effects of climate change manifest as immediate catastrophe. Violent storms. Extreme heat. Deep drought. On the Au Sable, the threat is a slow burn. Intensifying weather patterns have gradually added stress to the ecosystem, chipping away at wildlife’s ability to adapt. As the atmosphere continues to warm, severe weather events have gone from occasionally urgent to relentless assault.

“The guides of the Au Sable, we’re on the front lines,” McCool said. “Just a small change in temperature can have a massive impact on this resource. We need to make sure we still take care of it, as things change in our environment.”

Ecologically speaking, fish are the canary in the coal mine. Trout are an indicator species in the Au Sable ecosystem, meaning that their well-being reflects the health of the ecosystem. “Healthy trout is indicative that the whole system is healthy,” said Randy Claramount, a biologist with Michigan’s Department of Natural Resources. Likewise, unhealthy populations are an alarm bell: The poor water-quality conditions that cause trout to suffer are likely also stressing invertebrates and other biota. 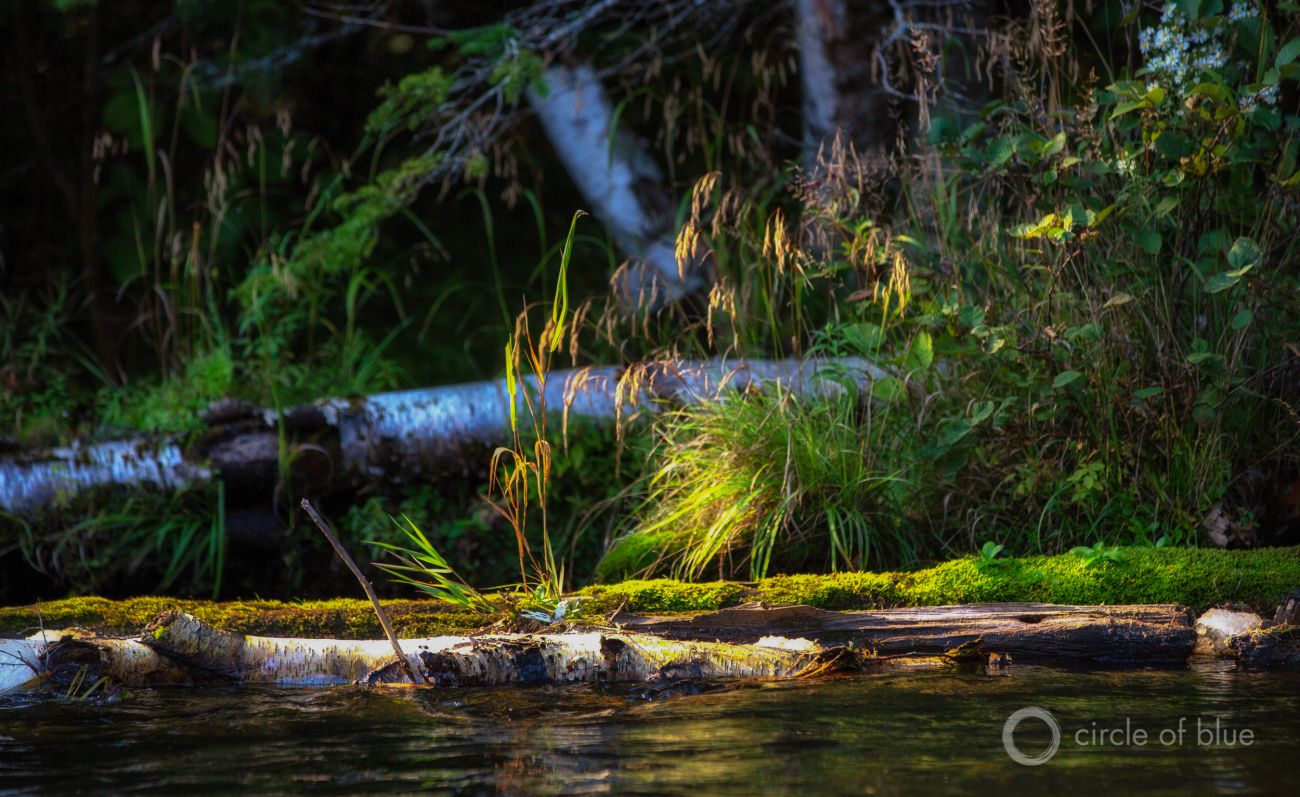 Unhealthy trout populations are an alarm bell; poor water quality conditions that cause trout to suffer are likely also stressing invertebrates and other biota. (© J. Carl Ganter / Circle of Blue)

“You start piling these things on top of one another, and it just gets harder for those fish to adapt to what nature’s throwing at them,” said Keith Curley, a conservationist at Trout Unlimited.

It’s a story that’s playing out nationwide. The carcasses of spawning salmon, weakened by warm waters and low oxygen levels, are piling up and rotting in the Klamath River in California. Drought reduced once-raging Montana trout streams to a trickle this summer. Steelhead in the Columbia River are at an all-time low. As anglers survey the damage, they are taking up the call to protect these environments from more harm.

Matt Supinski, a 50-year fly fisherman and internationally acclaimed author on the topic, has seen coldwater fisheries around the world struggle as the populations their livelihood depends on becomes threatened. In many places, fishers’ income is less reliable, as volatile river conditions force last-minute cancellations. “When your whole summer relies on tourism as its income for six months, and rivers are closed down because it’s too hot, that’s gonna devastate the fishing outfitter business,” he said. ”I’ve seen this happening for 10 years, but this year is by far the worst I’ve ever seen.” 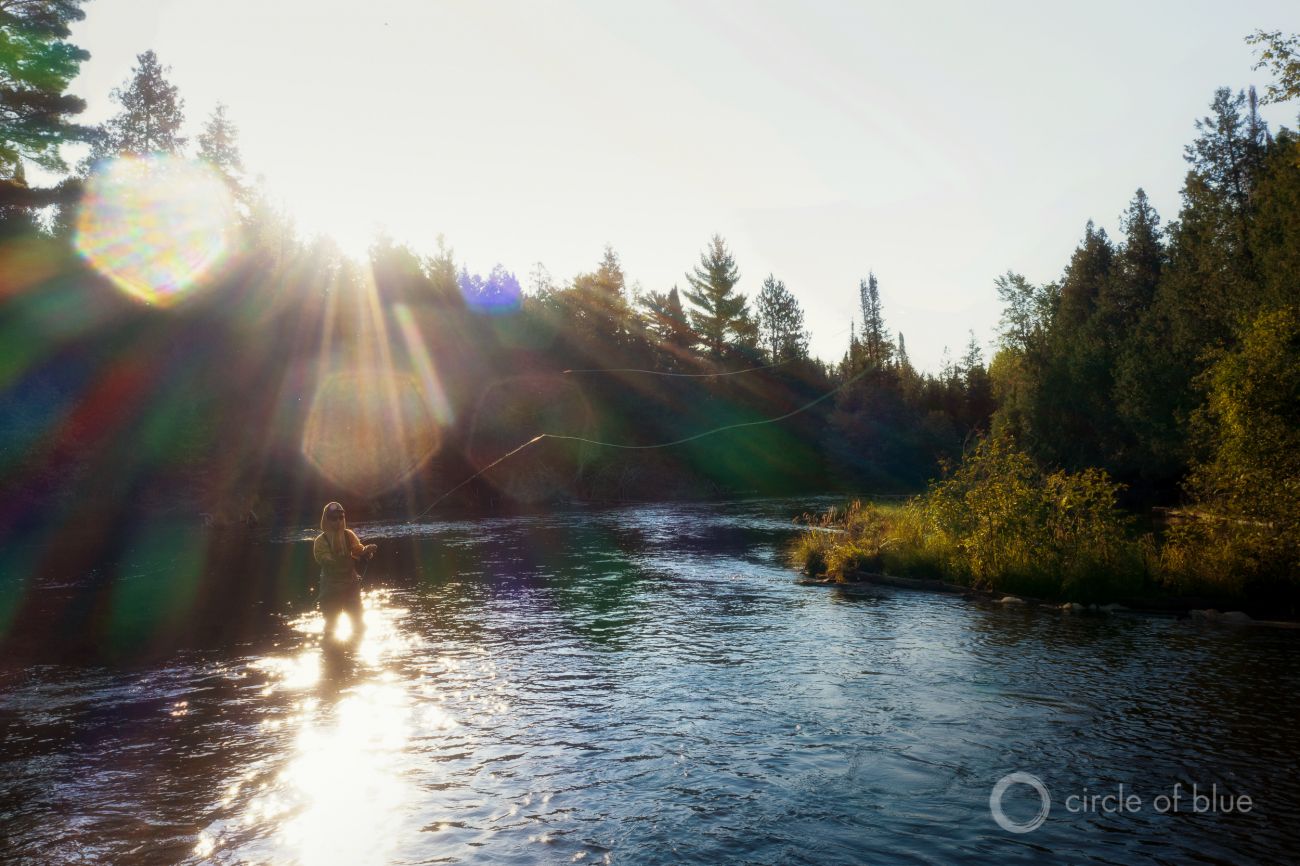 Michigan’s unusually warm winter temperatures, followed by a historic drought and one of the hottest summers on record, are warming the Au Sable River. (© J. Carl Ganter / Circle of Blue)

On the Au Sable, flooding also is a stressor. Recent years have seen more severe temperature swings during springtime when the snowpack, which feeds the Au Sable, begins to melt. This intensifies flooding events, which can sweep away trout eggs and batter a generation of young fish who aren’t yet strong swimmers. “If that happens once, it’s okay; the next year kind of makes up for it,” Claramount said. “But after a few years, if that happens again and again, will the population recover?”

Other bodies of water show the devastation these stressors could wreak on the river. In the Miramichi River in New Brunswick, Canada, striped bass — a predatory warmwater fish species — is intruding into warming waters and decimating the coldwater salmon population. In the Great Lakes, consistently elevated temperatures allowed invasive zebra mussels to colonize, transforming the ecosystem’s food chain and nutrient flow beyond repair.

Claramount fears that a sustained decline in the trout population could have similarly far-reaching impacts in the Au Sable. “It could literally be an off-ramp that could result in a state of the stream community that’s different, and hard to revert back,” he said.

The decline of river ecosystems is intensifying young anglers’ anxieties about the health of the planet. At just 14 years old, fisherman Landen Finkle worries about the condition of the river near his home in Traverse City. He’s particularly concerned about the loss of biodiversity.

“I grew up hearing stories about how great fishing was just five years ago. It’s sad, knowing that I’ll most likely never be able to experience the amazing fish that these waters used to have...that these rivers will never be what they used to be,” Finkle said.

Like a majority of his generation, climate and environment issues weigh on his mental health. Finkle is fascinated with freshwater ecology and hopes to guide fishing expeditions one day. But increasing signs of the river’s decline make him feel helpless at times, and fearful for the future of the pastime.

“River fishing is a really calming thing. And just to know that that could be coming to an end here is kinda sad,” he said. “It creates a lot of anxiety. There are a lot of things we can do to help, but there’s not really enough resources to help.”

Across the country, these anxieties are gradually translating into political momentum. Among recreational fishermen, a demographic that leans politically conservative, the issue has begun changing minds about climate change. Todd Tanner, a writer and lifelong sportsman, is the president of the climate education nonprofit Conservation Hawks, run by and for hunters and anglers. Tanner founded the group after an editor at an outdoors magazine rejected a story he had written about climate change, calling the issue a “Communist plot.”

The industry and its media have come a long way since then, he says. There are still hunters and anglers who deny the scientific consensus that climate change is caused by human behavior. But for many others, seeing the effects firsthand has changed their opinions on the issue. “It's just becoming so obvious that they don't really have a choice — they just have to accept it,” Tanner said.

Over the past decade, popular member organizations like Trout Unlimited have started explicitly incorporating climate change into their advocacy and messaging. “The big question in my mind isn't whether sportsmen or women will eventually understand what's happening and engage with it; they will. The big question in my mind is whether that will happen in time to make a difference,” he said. 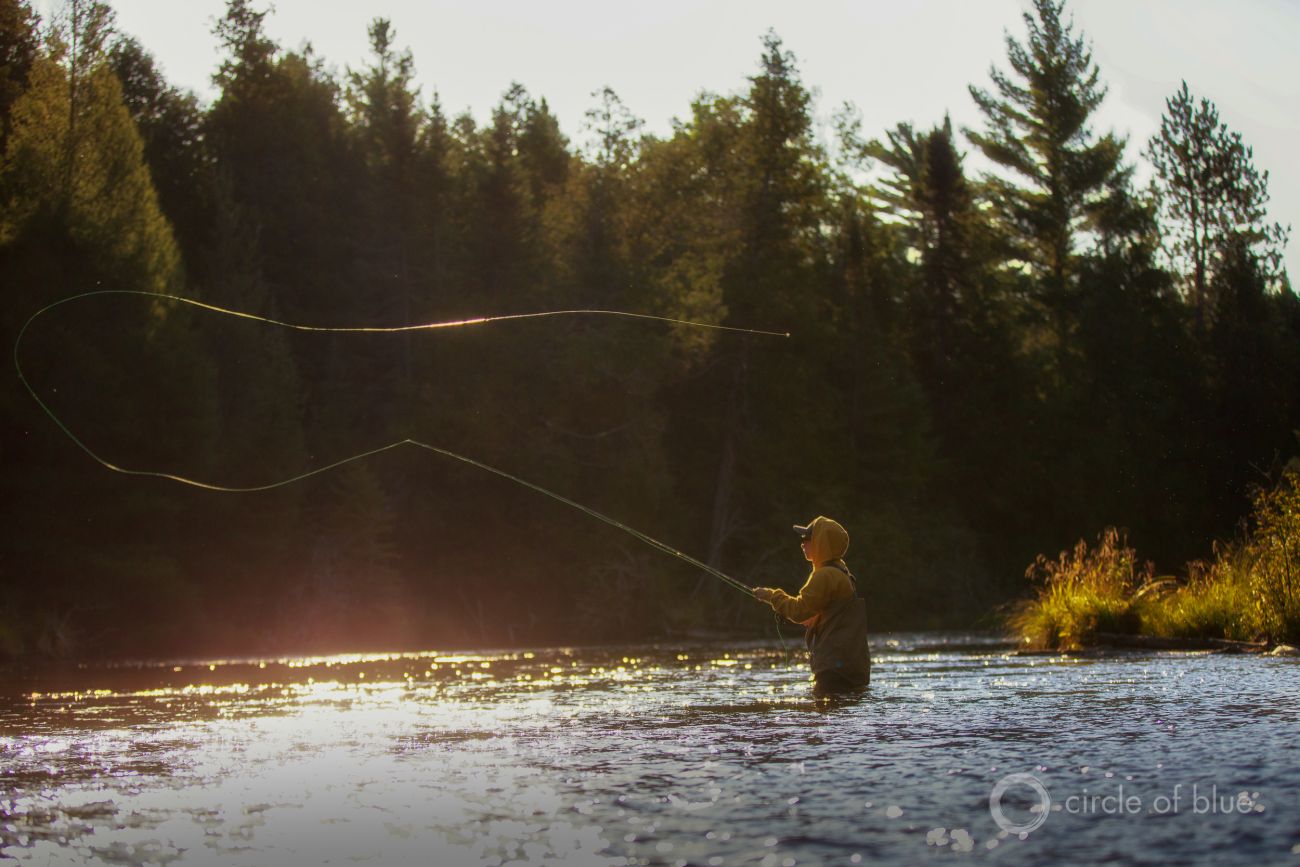 The Au Sable river in northern Michigan is so revered as a trout fishery that in 1959 a group of fisherman formed Trout Unlimited, now the country’s premier advocacy organization to protect cold-water streams nationwide. (© J. Carl Ganter / Circle of Blue)

Tanner laments the devastation that climate change has brought to the natural environments that hunters and anglers rely on. But amid the tragedy is a sliver of hope: that it can raise awareness about the issue in a population that might not otherwise support action to combat climate change. "We hope that conservatives will spend as much time and effort paying attention to the issue as folks on the left,” he said.

How to Turn the Tide

The good news is that, just as stress on river ecosystems accumulates gradually, so too can it be lessened. The root cause of the issue is global climate change, which can only be addressed by rapidly curbing carbon emissions. In the meantime, mitigation techniques can be the difference between whether a fish population persists in an area or not.

The most straightforward solution is to limit overfishing. There is an informal agreement among Au Sable anglers not to guide fly-fishing expeditions when water temperature surpasses 68 degrees, at which point even catch-and-release can kill a fish. Michigan’s Department of Natural Resources has posted signs along the river to this effect, urging anglers to consider not fishing under these conditions.

McCool, the angler, hopes the DNR will begin to enforce these regulations. The agency explained in correspondence with Circle of Blue that it has been taking a slower approach.

“Our staff are currently pulling together information from around the country regarding what others are doing from a regulatory perspective to reduce potential effects on trout populations due to warming,” DNR Fisheries Chief Jim Dexter said in an email.

“‘Temporary’ suspensions on angling activity have rarely been used in Michigan. Having said that, restrictions could provide a very useful purpose, conserving our resources for a better day. We are only in the beginning of attempting to flesh out what could be done and how it could be executed.”

Simple conservation tactics, many of which indigenous communities developed and have utilized for centuries, can make a huge difference in increasing fish populations’ resiliency. Restoring trees along deforested riverbanks, for example, adds shade to the ecosystem and cools the river during extreme heat. And removing barriers to streams’ flow can allow fish to perform their instinctive migrations.

In many cases, Curley said, these solutions benefit human communities along with riparian ones. The technique of “wood addition,” used to mitigate flooding of communities from West Virginia to Michigan, is one example. Conservationists strategically add timber to streams, which makes the river flow “coarser” and disperses floodwaters across a greater area, rather than barraging a single community downstream. This also benefits trout by creating new habitats for them and mitigating the flooding that can batter young fish.

As McCool reflects on this year’s difficult season, he’s facing a completely different world from the beginning of his fly-fishing career. But in the meantime, all he can do is use the tools at his disposal. “We just watch and see, and take measurements,” he said. “It’s a very delicate environment, and needs to be taken care of.”