When Michigan Attorney General Dana Nessel dropped a federal lawsuit seeking to shut down Line 5, and instead sought to revive a mothballed state-level suit, she may have hoped for better odds.

Enbridge’s response: Not so fast.

The company on Wednesday filed in the U.S. District Court for the Western District of Michigan to remove a state lawsuit in Ingham County to federal court, in a maneuver that may feel like déjà vu to close watchers of the Line 5 drama.

If the case returns to federal court, it could be bad news for Nessel and Gov. Gretchen Whitmer, Democrats who campaigned on a promise to shut down the 68-year-old pipeline that passes under the Straits of Mackinac.

At Whitmer’s direction, Nessel last month dropped a previous suit that aimed to shut down Line 5 after losing a bid to get a state-level judge to preside over the case. Instead, U.S. District Court Judge Janet Neff said the case is best decided by a federal judge because it deals with federal issues “at the highest levels of this country’s government.”

The federal Pipeline and Hazardous Materials Safety Administration regulates pipelines like Line 5. The 645-mile pipeline that carries oil from Superior, Wisconsin, to Sarnia, Ontario, is also subject to a treaty dispute between the United States and Canada, whose government leaders argue a shutdown would violate a 1977 agreement that bans either party from shutting down cross-border pipelines except in certain instances.

Neff’s decision was a blow to state attorneys, who had argued that Michigan law gives the Whitmer administration authority to shut down Line 5 over concerns that it poses an unreasonable risk of an oil spill in the Straits. By keeping the case in federal court, Neff was essentially nullifying that argument.

When Nessel sought to reopen the state lawsuit at Whitmer’s urging, she called state court “the quickest and most viable path to permanently decommission Line 5.”

Consolidating the two cases, he said, “will allow a single judge to rule on the closely related issues in these two cases.”

“Enbridge looks forward to a prompt resolution of both cases,” Duffy said.

Enbridge’s action Wednesday, if successful, could put the case back at square one. But Nessel contends Enbridge doesn’t have the power to move the case to federal court, because the company had a 30 day deadline to do so after Nessel filed the Ingham County suit in 2019.

“This is an outrageous maneuver by Enbridge that flies in the face of federal law,” she said, vowing to “address” Enbridge’s actions. 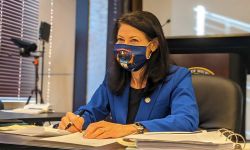