Catch “Watching the Waters” on TV

Watch a web trailer of the latest episode of Great Lakes Now, or catch the full episode on these PBS stations:

GRINDSTONE CITY — Brandt Rousseaux loves the water, having spent two decades in the Coast Guard long before settling in this small community at the tip of Michigan’s thumb. But lately, gazing upon the shoreline from a fishing boat in Lake Huron has become an exercise in frustration.

Water has flooded yards, scoured away beaches and threatened homes. Waves are threatening to chew through the points that protect the historic harbor in Grindstone City, at the township’s eastern end.

But most troubling for Rousseaux are the seawalls and rock barricades, known as riprap, that now line the shore as residents scramble to protect their property from the encroaching waves.

It's a reminder, to Rousseaux, of local government's past shortcomings: In Port Austin and many communities on Michigan's coasts, a longstanding laissez faire approach to coastal land use policy has allowed residents to build homes precariously close to the shoreline, with devastating consequences when Great Lakes water levels inevitably rise.

But the ongoing high water crisis is leading some communities, Port Austin included, to rethink the policies that put them here. 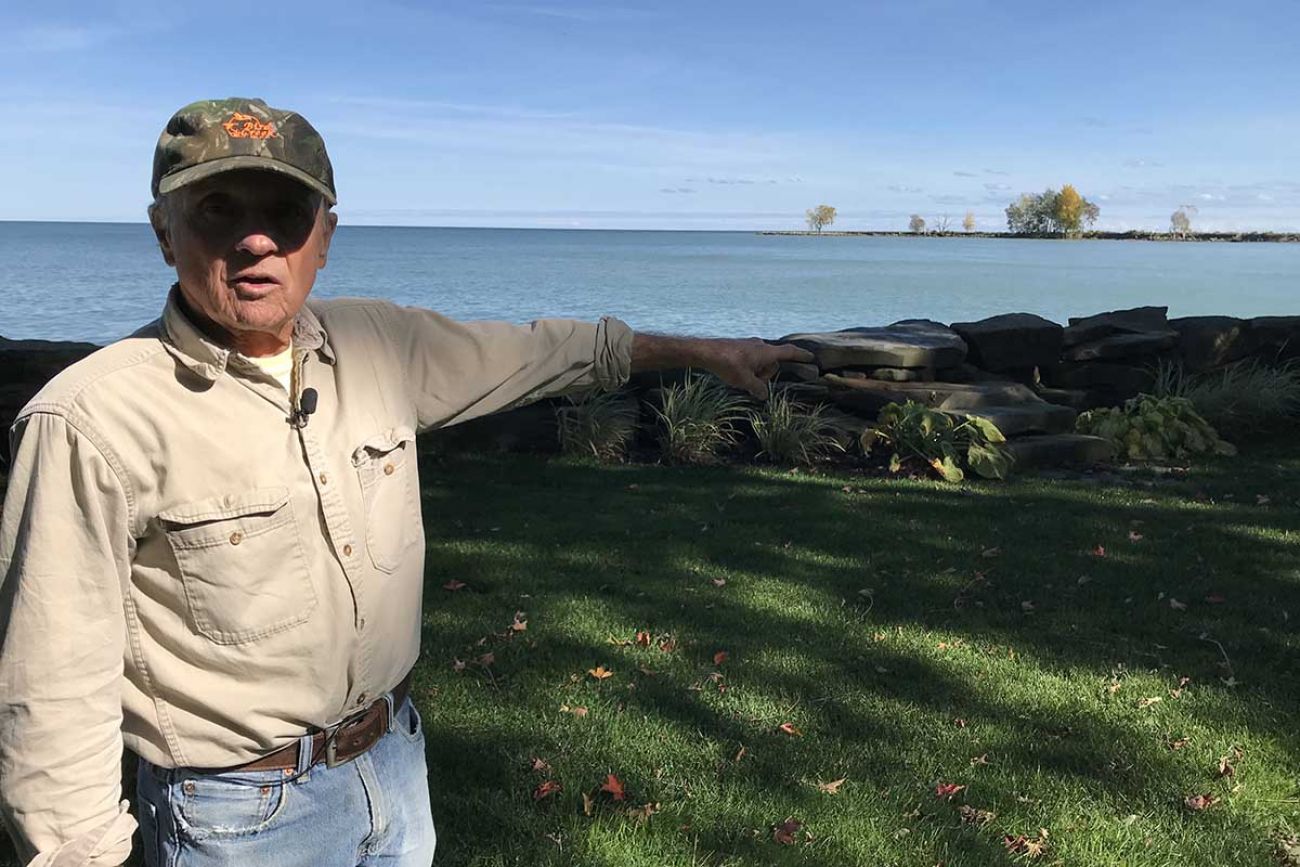 But beyond that, coastal development in Michigan is largely a local concern, with municipal governments deciding where homes and infrastructure can go.

“The ultimate authority over those lands is with local decision makers,” said Ronda Wuycheck, who leads the Michigan Coastal Management Program within the Department of Environment, Great Lakes and Energy.

With 387 local jurisdictions touching Michigan’s shorelines — many of them small villages or townships without the staff expertise or budget for comprehensive land use planning — policies governing shoreline development can vary from one stretch of beach to the next.

In many coastal communities, said Zach Vega, a planner with the Traverse City-based nonprofit Land Information and Access Association, there is no policy at all.

Unburdened by setbacks to keep construction away from the shore, “people move into a community, and they see a huge swath of sandy beach and think ‘This is a great place to build a house,’” Vega said. “They don’t recognize that’s only temporary, and within a few years it’s probably going to be underwater.”

When flooding or erosion threatens homes and infrastructure, owners have three options: Block the waves with sand bags, rock walls or other armoring that provide only temporary relief, move the structure if possible, or demolish it before the waves claim it.

Each option comes at a cost. Hard armor such as seawalls or riprap (boulders piled along the shore to deflect waves) worsens erosion over time, requires costly maintenance and can hinder public beach walking.

Moving structures is expensive, and some properties are so small that relocating further inland is impossible. Demolition is a last resort.

The Michigan Department of Environment, Great Lakes and Energy granted 2,238 permits to build seawalls, riprap and other shoreline armoring along the Great Lakes in the fiscal year that ended Sept. 30, a threefold increase over the previous year.

In Grindstone City, the 50-yard-wide beach in front of Tony Goddeeris’ home disappeared as Michigan’s rainiest five-year period on record sent water pouring into the Great Lakes. Seasonal storms sent waves crashing over the seawall at the edge of his property, prompting him to top the wall with more than 200 tons of boulders in the past two years.

“And we still get five-foot waves that come in and crash over,” he said.

Goddeeris counts himself lucky: His home is a comfortable 40 feet from the water. Neighbors who built closer to shore are scrambling to protect their homes. 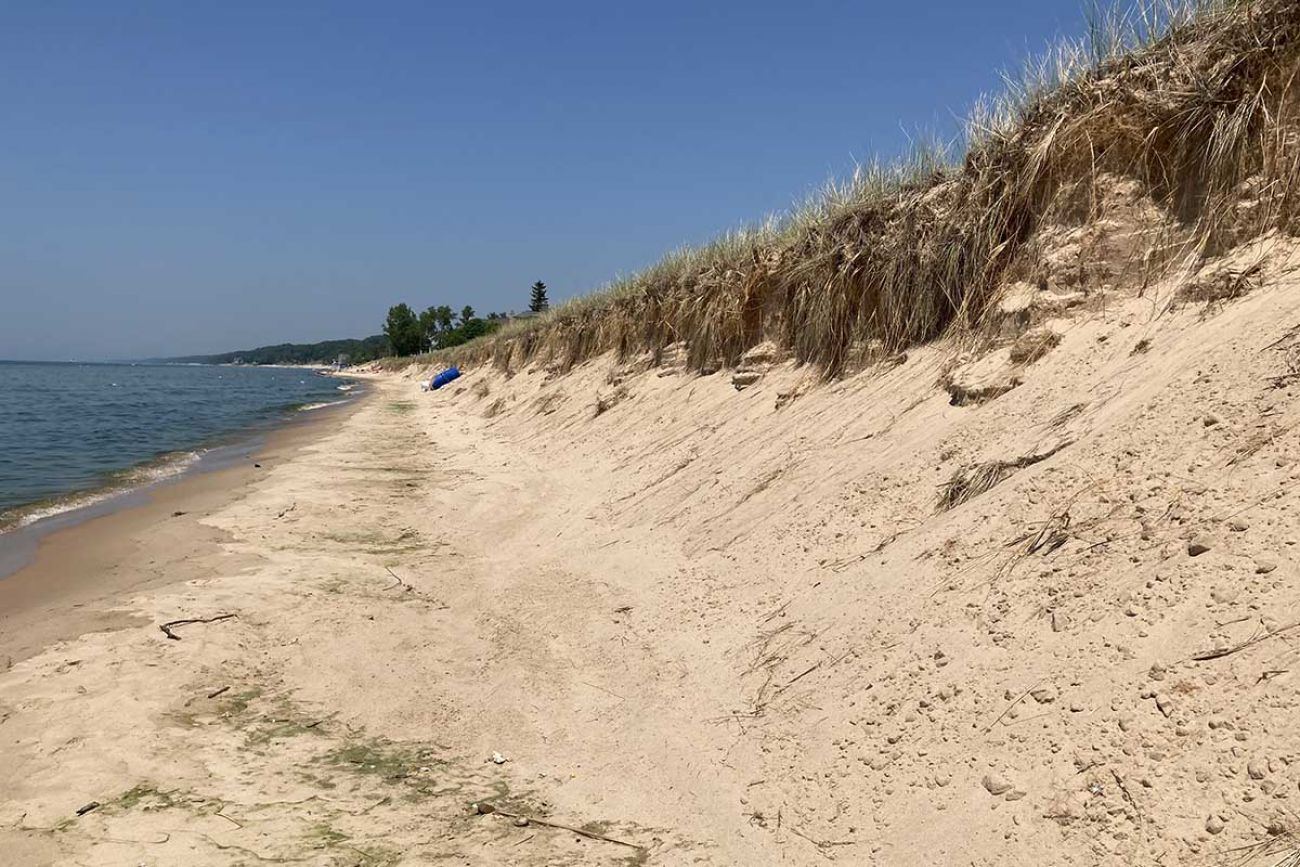 ‘Coastal resiliency’ to the rescue?

The push to rectify policies that allowed people to build close to shore is one component of “coastal resiliency,” a term that’s getting greater buzz as climate change exacerbates the Great Lakes’ natural tendency to batter the shores that surround them.

The idea, said Richard Norton, a professor of urban and regional planning at the University of Michigan’s Taubman College of Architecture and Urban Planning who trains local officials in coastal management, “is to better think through the long-term consequences of how these lakes move.”

Those conversations have taken on a new importance as scientists have learned more about how climate change could play out in the Great Lakes region. Many now believe Michigan will experience more intense storms that could worsen flooding and erosion and cause water levels to swing more dramatically.

Protecting homes and infrastructure by reinforcing the shoreline to prevent erosion or flooding may be a losing bet, experts say. Instead, local communities should be plotting their retreat from the shore.

“Mother Nature has reminded us where her new flood and erosion line is,” said Wuycheck, of the Michigan Coastal Management Program. “If you get flooded out, you know it’s going to come back. So let’s not build in certain areas.”

“How much risk do you want to take on?”

In Port Austin, Rousseaux said coastal residents have inherited the consequences of the area’s hands-off approach to shoreline development, which allows landowners to build “as close as they want to that high water mark.”

Some landowners demanded lower property taxes because part of their lawn has fallen into the lake.

So last year, Rousseaux and other local officials worked with LIAA to update master plans for Port Austin Township and the Village of Port Austin, with coastal resiliency in mind. Using federal grant money awarded through the Michigan Coastal Management Program, LIAA has helped more than a dozen coastal communities. Interest has spiked during the ongoing high water crisis, Vega said.

The goal isn’t to make planning decisions for communities, Vega said, but “to give them the option: How much risk do you want to take on?”

After watching Great Lakes water levels swing from extremely low to extremely high in just a handful of years, he said, communities “are recognizing that this is going to be an issue they’re going to have to deal with — and not just in the short term.”

“We’re going to have to think about what the long term coping strategy is going to be,” he said.

Rousseaux didn’t like what he saw: If Port Austin Township continues to build out under current zoning and a “perfect storm” hits, the resulting damage from flooding alone could be near $42 million.

“But all we can do right now is suggest that you don’t do that,” he said.

Rousseaux said the township and village planning commissions will likely recommend establishing a setback requirement to keep new construction away from the shore.

“We want to do it now, before anybody puts another foundation in the ground,” he said.

Resulting changes to the shoreline’s character could take decades to realize. New zoning would protect “maybe a couple dozen” undeveloped lots, Rousseaux said. Existing structures would be grandfathered into the old zoning code, triggering the new restrictions only when a landowner seeks to rebuild.

“We’re dealing with them not having done this 50 or 100 years ago,” Rousseaux said.

Across the state on Lake Michigan, Grand Haven revised its master plan in 2016 and then created a zoning district that prevents shoreline armoring.

Much of Grand Haven’s shoreline is state parkland, and sandy beaches extend to private land north of the park. Local officials and residents watched as neighboring towns began to lose their beaches to boulders, said Jennifer Howland, the city’s community development manager, and “we didn’t want that to happen here.”

The new zoning bans shoreline protection other than fencing, though property owners can seek an exception if they can show the policy creates an “unnecessary hardship.”

As of early October, nine property owners had received permission from the city’s zoning board of appeals to install large sand-filled tubes along their shore, under the condition that they remove the tubes when the water subsides. Howland said such flexibility helps create public buy-in for the ordinance. The city’s zoning board of appeals made it clear to the residents that “this is not the first step toward permanent armament of the shoreline.”

Coastal resiliency experts say they are buoyed by action in places like Port Austin, Grand Haven and a handful of other communities. But hundreds of communities still lack policies designed to cope with fluctuating water levels and other hazards.

Wuycheck, of the state coastal management program, said her office is working to change that, including by launching a leadership academy where local officials can learn from peers who have already made such changes.

In addition to more state and federal money to help coastal towns recover from the damage and be better prepared next time, the state legislature can also help, said Mark Wyckoff, editor of Planning & Zoning News and former director of the Michigan State University Land Policy Institute.

One example is state law that would require lakeshore property sellers to notify prospective buyers that they’re purchasing land along an eroding or flood-prone shoreline. Wyckoff said past attempts to require such warnings failed amid opposition from real estate industry representatives, who believed such a provision would impede sales.

“The buyer beware caveat emptor has to be the first and last thing in every conversation with somebody buying along the Great Lakes,” Wyckoff said, “but it’s not.”