When what was then the tallest wind turbine in the U.S. was erected on the outskirts of Traverse City in 1996, it was hailed as a sign of Michigan’s clean energy future.

Last summer, when the 26-year-old, now-comparatively diminutive turbine was disassembled and replaced by solar panels, it was a sign of a new future.

Large scale solar projects meant to power Michigan’s homes and businesses are expanding, with potential developments popping up across the state. And while the wind turbines that now rise higher than the Washington Monument will keep spinning across sections of Michigan, solar energy parks are expected to be the primary new renewable energy sources coming online over the next decade.

Industry experts say the vast majority of renewable energy projects now in  the pipeline in Michigan and nationally are solar. Consumers Energy expects solar projects to supply “60 percent of everything” the utility generates by 2040, said spokesperson Brian Wheeler.

“Solar energy is the centerpiece of Consumers Energy’s Clean Energy Plan,” Wheeler told Bridge Michigan. “As we close our last coal plants in 2025, we’ll be adding 8,000 megawatts of solar energy.

“Solar will be the primary source of new power generation for Consumers Energy because it’s more affordable than before, provides economic benefits to communities and will help us provide 90 percent of our energy from carbon-free sources by 2040.”

Solar projects are now cheaper than wind power, say industry experts, and can be spread over less land. Modern wind turbines, producing about three megawatts of electricity, might be spaced 80 acres apart. That same amount of electricity can be generated in about 30 acres of solar panels. The downside of solar is that those panels cover most of the land, making it not usable for farming; farmers can plant crops between wind turbine towers.

The question now is whether the grassroots opposition that has hobbled the spread of wind energy in the state will be more accepting of solar parks that aren’t as visible to neighbors.

That acceptance is vital to reaching the decarbonization goals of the state and its largest utility companies.

In 2021, renewable energy sources provided about 11 percent of Michigan’s net electricity generation, with the power produced by renewable sources in Michigan jumping  77-fold since 2010.

Consumers Energy and DTE both set goals of achieving net-zero greenhouse gas emissions by 2050. The Biden administration set a national goal of 100-percent carbon pollution-free electricity by 2035. Gov. Gretchen Whitmer introduced a plan to generate 60 percent of the state's electricity from renewable resources and phase out coal-fired power plants by 2030.

Currently, most renewable energy power in the state (77 percent) comes from wind. There are 1,658 turbines across the state churning out 3,527 megawatts, enough electricity to light at least 1.4 million Michigan homes last year.

But opposition to the towering turbines that generate that electricity has grown in recent years. In one recent example reported by Bridge Michigan, Montcalm County voters in 2022 rejected five township-level referendums that would have allowed the construction of wind turbines. All the referendums lost by at least a 2-1 margin, and seven officials in various townships were recalled by campaigns that derisively labeled them pro-wind. Referendums in townships in other parts of the state that would have allowed turbines or expansion of existing wind projects have been defeated.

But those projects have often drawn opposition from some residents, who voice concern that  the towers that can be seen for miles, damaging the rural nature of their communities. Some residents also have concerns about possible health effects from wind turbines.

That opposition matters because, in Michigan, utility-scale renewable energy projects are approved at the township level, where angry residents can halt a development by getting a referendum on the ballot or lobbying township trustees to turn down projects. (Some states, including Iowa and Minnesota, decide renewable energy siting policies at the state level, eliminating much of the community-level strife over individual projects. Statewide siting is a policy reform that may be debated in Lansing this year, according to several energy and environmental group leaders.)

Even before votes were cast in November to defeat the wind project in Montcalm County, developers were approaching farmers who’d previously signed wind leases to see if they’d now be willing to sign leases to place solar arrays on their land. Michigan’s largest operating solar park opened in Shiawassee County in 2022, and covers 1,200 acres. That park alone can generate 347 megawatts of electricity, enough to provide power to 138,000 homes. A 125-megawatt solar development near Hart, in West Michigan near Pentwater, is expected to come on line in 2023.

Tony Chartrand, supervisory engineer for municipal utility Traverse City Light & Power, told Bridge Michigan that utilities are looking to expand solar power. Putting solar panels on the site where the city’s landmark wind turbine once stood is an example of that.

When the turbine was erected in 1996, “we wanted to make a statement that we were forward-thinking,” Chartrand said. Now, seemingly “everything being built” is solar.

Near Traverse City, land values are too high to lease or purchase several hundred acres for a solar park, Chartrand said, though he added  that “they’re going to have to go somewhere.”

“There is a whole lot more solar development in the state right now than wind, and I think a lot of that is the opposition to wind,” said Sarah Mills, senior project manager for the Graham Energy Futures Initiative at the University of Michigan. Mills conducted a study of wind projects in four Midwest states including Michigan, titled “Farmers versus Lakers,” that found “natural amenities” such as lakes near a proposed utility wind energy project increased opposition.

In essence, pretty much anywhere people have lake homes, residents don’t want to look at turbines, some of which can top 600 feet, taller than the main towers of the Mackinac Bridge.

While solar parks cover large expanses of farmland, there’s hope the projects will generate less opposition because they can be hidden from public view by fences or trees. Barriers are often required in township ordinances approving energy projects.

One warning sign for the state and developers, though, is Monroe County, where residents opposed to solar arrays being placed on farmland have managed to at least temporarily stop a new project. The county, along the Ohio border, has a 150-acre, 20 megawatt solar park (enough to light 3,500 homes) now in operation, but a second development is on hold after officials in Milan and Dundee townships placed a moratorium on development until they can study the project more. In both townships, officials faced community opposition to solar parks.

The World Health Organization says the low level of electromagnetic field emitted by solar parks is not dangerous. And a 2013 study by the Lawrence Berkeley National Laboratory in California found no negative impact on the value of homes near the more obtrusive wind turbines. A 2016 study published in the Journal of Real Estate Research found “no unique impact” on sales near turbines in Massachusetts, but did find a negative impact on values of homes near major roads or transmission lines.

The Ostrander family signed a lease to allow solar development on 150 acres of the Milan Township farm that has been in their family for 154 years. That project is now in limbo after township officials placed a moratorium on renewable energy projects.

Both Clara and Leonard Ostrander have full-time jobs, and lease their fields to neighbor farmers for corn and soybeans. The family would make more money leasing the land for renewable energy.

“I’m trying to maintain everything, trying to keep up both homes (on the property) that are both over 100 years old, and it’s a financial stress to do so,” Clara Ostrander said. “The lease would provide us some financial security to still keep the farm, I did not want to sell it.” 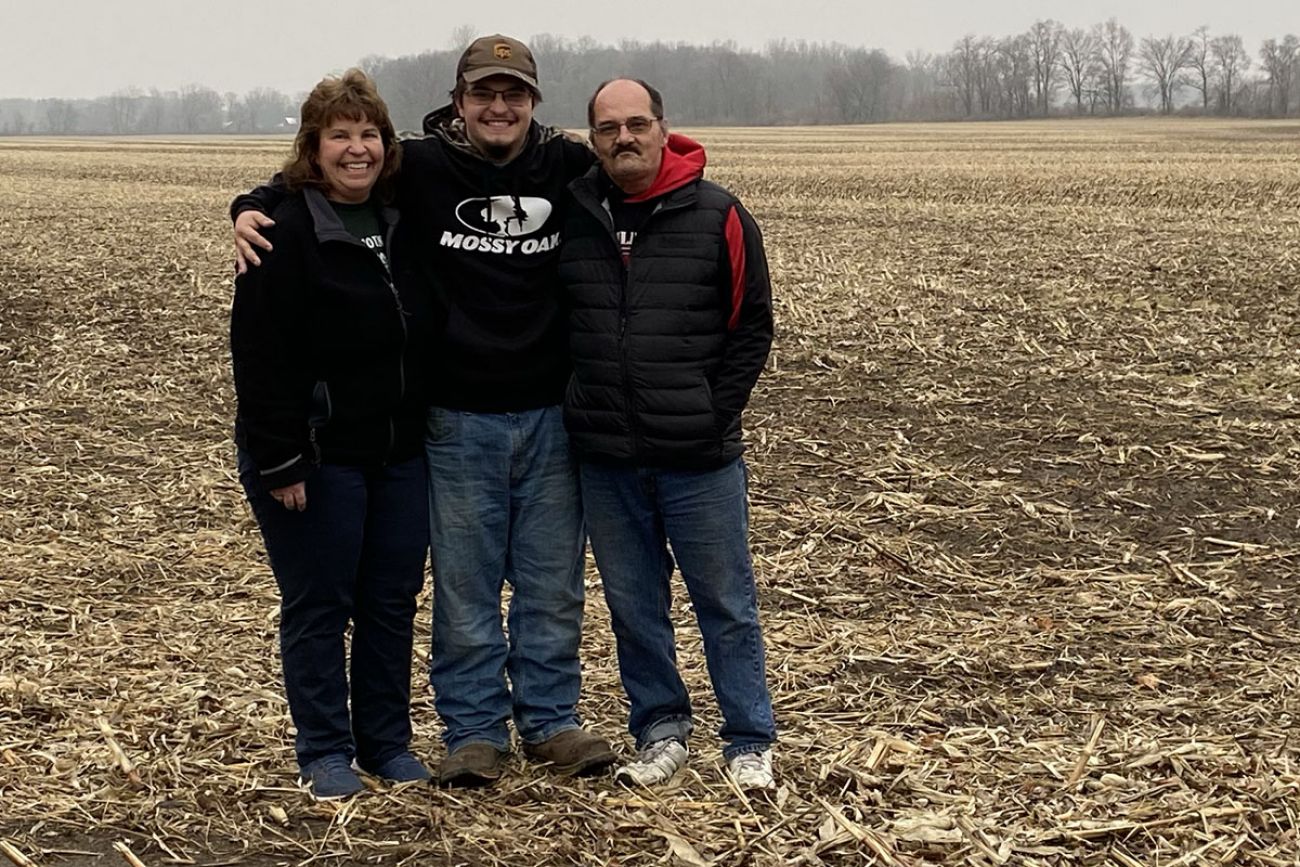 The Ostrander family, mom Clara, son Aaron and father Leonard, hope to lease part of their Monroe County farm for a solar park. Some in the community are hoping to stop the project. (Bridge courtesy photo)

Much like how a proposed wind development in Montcalm County turned neighbor against neighbor, Clara Ostrander said the fight over solar power in Monroe County has strained relationships. “There are people I will never talk to again who I’ve known forever,” she said. “They  scream we don’t want this here, we don’t want this on our farmland. But it’s not their farmland. What I do on my farm is my business.”

One solution is to place renewable energy projects on abandoned industrial sites rather than farmland. One example is a planned solar park on the site of an abandoned iron mine near Iron Mountain in the western Upper Peninsula.

“An argument I hear is people don’t want to step out their door and look at solar (parks),” Gould told Bridge Michigan. “Well, make that argument for trailer parks, right? There’s a lot of things that are out there we’d prefer not to look at but it’s part of our society’s fabric. We need businesses that produce things and sometimes they don’t look good.”

Gould said the renewable energy industry is working to develop vertical solar arrays that take up less space and would allow some farm uses below them, such as a grazing area for sheep.

“Solar developers are making an honest effort in trying to find a way to work (through the concerns of communities),” Gould said. “The barn door is open, we’re not going back to fossil fuel. If renewable energy is here, let’s make it work.”