Newly hatched chicks from birds on the Endangered Species List are running up and down a handful of beaches in the Great Lakes region. The population is recovering from near extinction, but they’re still dependent on a lot of human help.

These shorebirds won’t nest anywhere but on a Great Lakes beach, one with a lot of pebbles and rocks. Some of those birds nest on Lake Michigan’s beaches at the Sleeping Bear Dunes.

Looking through binoculars at a nest, it doesn’t appear the male piping plover put much effort into building it — and that's part of why they can be so vulnerable to disturbance. 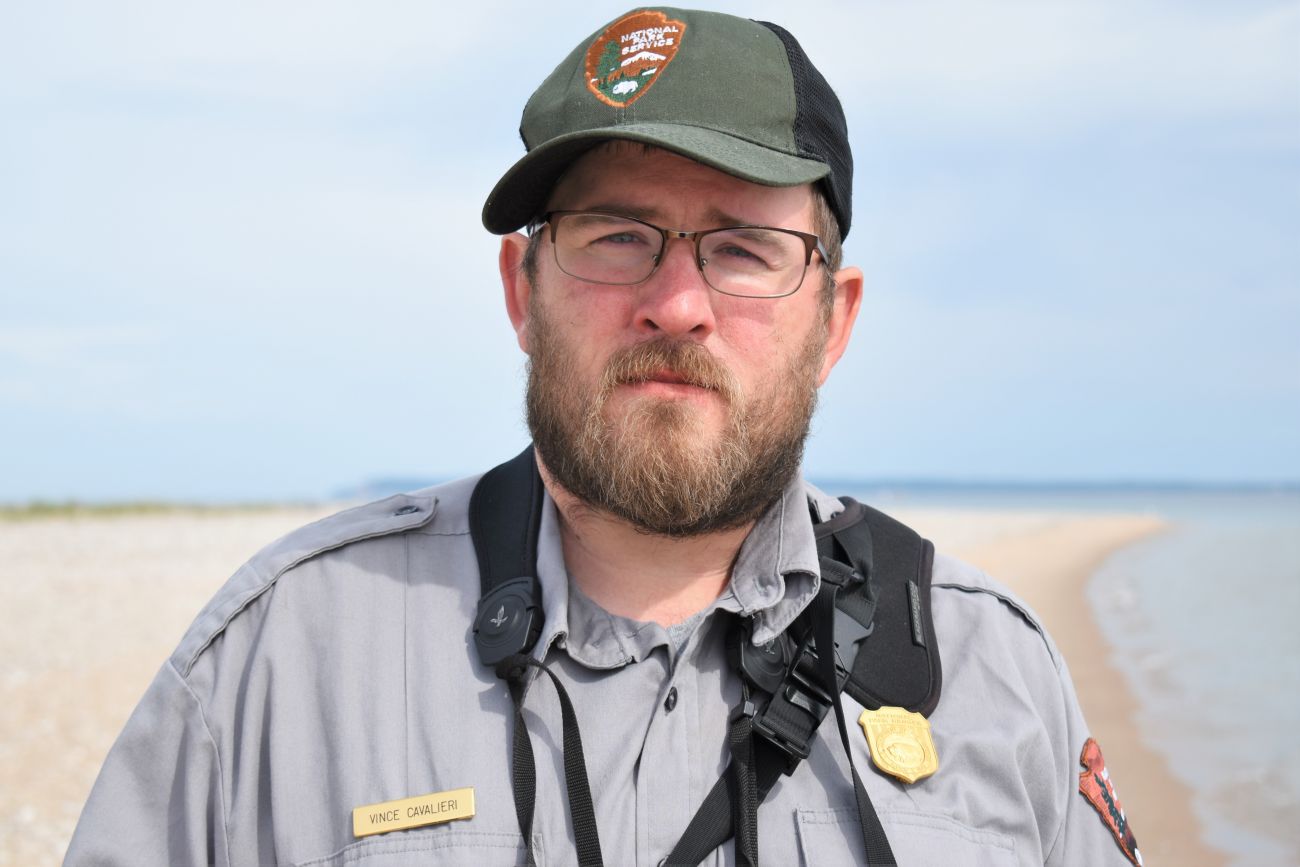 Vince Cavalieri is a wildlife biologist at Sleeping Bear Dunes National Lakeshore. He's been working with experts around the Great Lakes region to save the piping plover population. (Lester Graham/ Michigan Radio)

“Simply sitting on the sand and kicking their back feet out and making a little depression in the sand. And that's where the female will lay her eggs. They then typically line the nest cup with shells or small pebbles. And that's the entirety of the nest," said Vince Cavalieri, a wildlife biologist at Sleeping Bear Dunes National Lakeshore.

There are not a lot of isolated beaches like this one left. There’s been an explosion of vacation homes and other development along most of Michigan’s coastlines. That’s meant disruption for these sensitive birds.

“Habitat loss and recreation pressure are probably the two biggest remaining threats, but they also face threats from predation. A lot of the predator species, like crows and raccoons, have increased in number with human changes to the environment,” Cavalieri said.

Another predator, the merlin falcon, is increasing in numbers after nearly being wiped out because of DDT contamination. It is becoming a new threat to piping plovers.

Signs and rope barriers warn people — especially those with dogs — to keep their distance. If piping plovers feel threatened, they’ll abandon the nest. 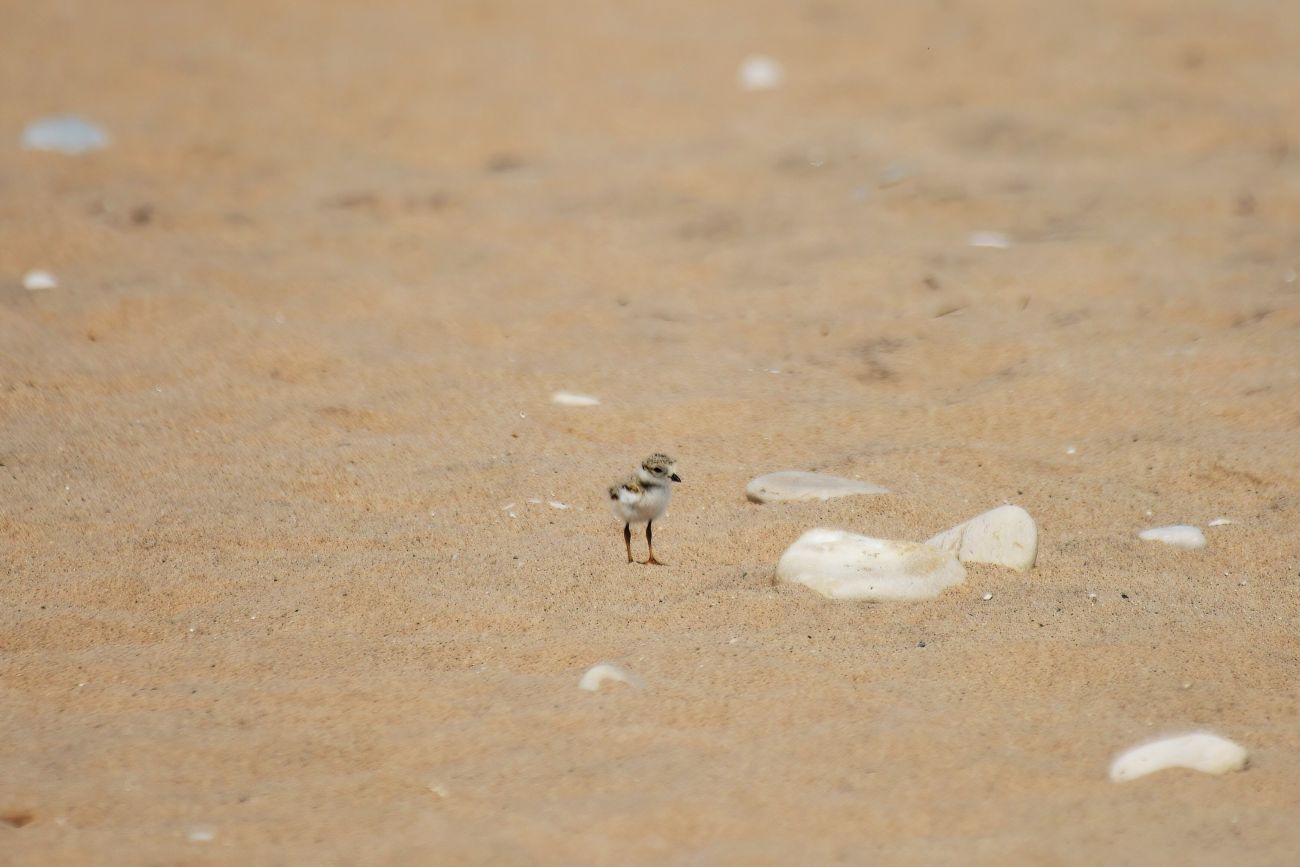 A piping plover chick ventures out of the nesting area to scan the beach for food. (Lester Graham/ Michigan Radio)

As Cavalieri spoke, three tiny piping plover chicks started running around among the pebbles. They looked like two twigs with a bit of fluff at the top.

This year looks to be a good year for piping plover reproduction. As recently as 2020 there were multiple failures. That year was one of the lowest survival rates of chicks since the piping plover was put on the Endangered Species List. The reason was high Great Lakes water levels which inundated many of the sites that piping plovers use for nesting.

Francie Cuthbert is a professor with the University of Minnesota’s Department of Fisheries, Wildlife and Conservation Biology. She’s worked for decades to save the Great Lakes piping plover. She recently spoke in Michigan about the decline of the piping plover population, which by the mid-1980s was almost wiped out.

"There were only 12 to 17 pairs, so they were functionally extinct in the Great Lakes region, extirpated as a population. So the situation was pretty dire.”

Since then, the population has increased to an average of 70 or more breeding pairs over the last few years. This year there are 74 nesting pairs.

To help protect the birds and monitor how they’re doing while they’re nesting, a lot of people watch over them. 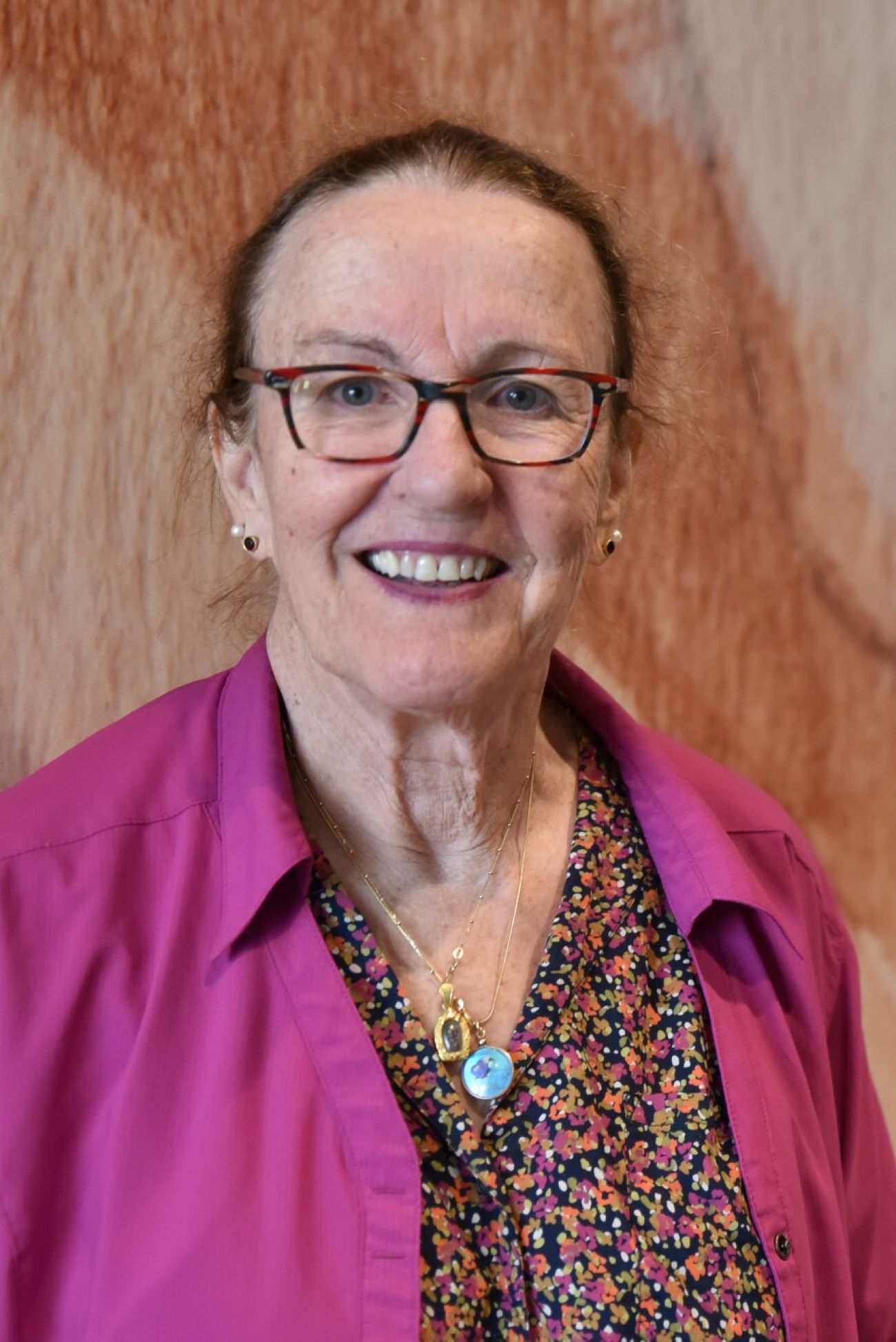 Francie Cuthbert is a professor in the Department of Fisheries, Wildlife, and Conservation Biology at the University of Minnesota. She's worked to save Great Lakes piping plovers for decades. (Lester Graham/ Michigan Radio)

“It's a big group effort between park employees, partners working with us, and then a large volunteer group that also helps us keep an eye on the birds,” said Erica Adams, the piping plover coordinator at Sleeping Bear Dunes.

Keeping an eye on the birds means a couple of things. First, it means observing the number of eggs, watching to see if the parents stick around, and then counting the chicks. It also means keeping people and pets outside of the restricted area.

And if something does happen to the piping plover parents, the wildlife biologists rescue the eggs.

“We have a partnership with the Detroit Zoo and the University of Minnesota that will then take those eggs, put them in a captive rearing facility, complete the incubation period. The chicks will hatch and then usually they're released back in the park. They're able to go out and forage, learn how to be a plover, and then they'll eventually migrate. And we keep our fingers crossed that they return the next year,” Adams said.

Farther north on Michigan’s coast, another monitor was still waiting for chicks.

Kailie Sjöblom was hired by the Michigan Department of Natural Resources to watch for a male piping plover that usually nests near Muskegon. It didn’t show up this year. On average, piping plovers live about five years. That male was ten years old. The guess is the old bird just didn’t survive the migration to the breeding grounds. 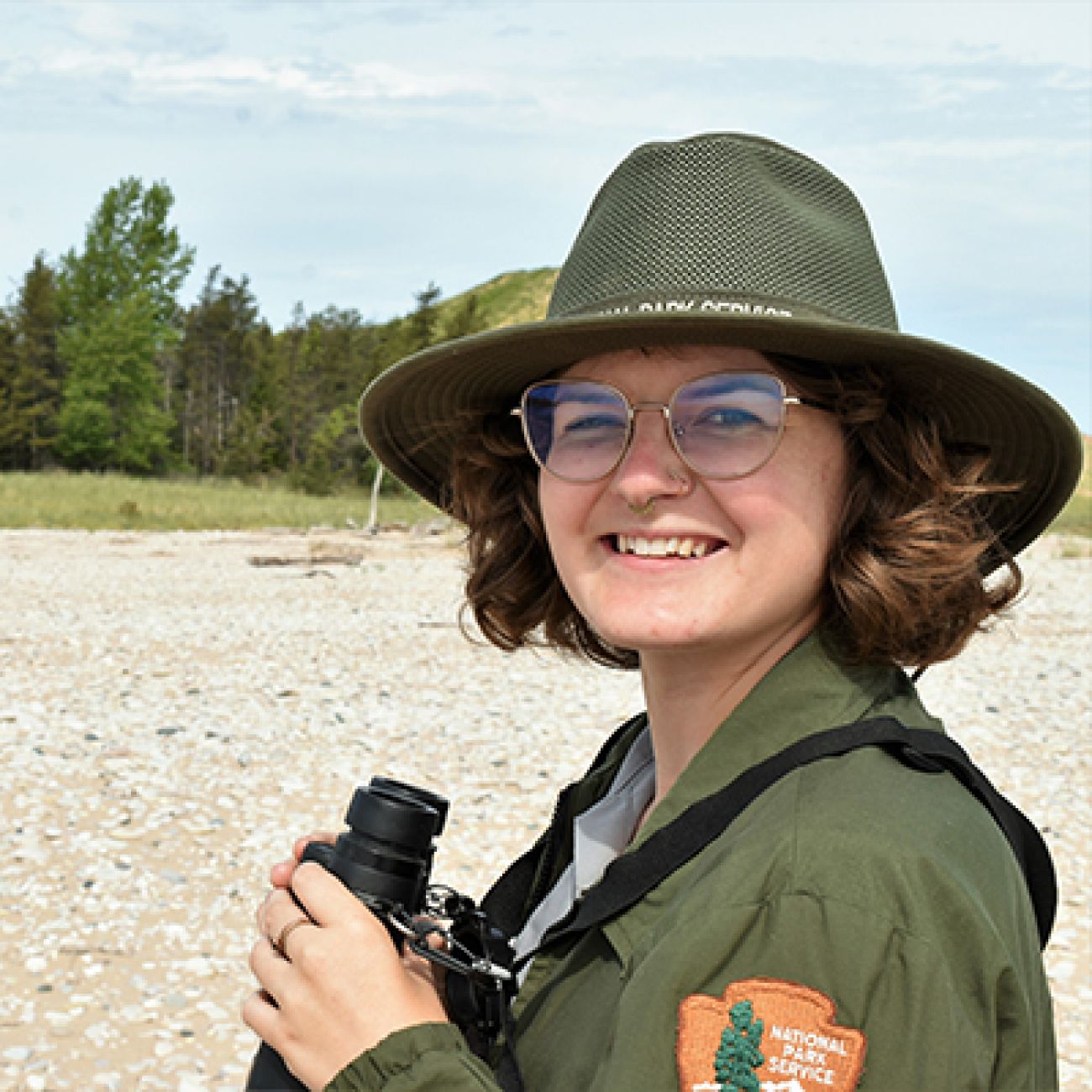 Sjöblom transferred to Fisherman’s Island State Park near Charlevoix to keep watch over a pair nesting there. It’s the first time there’s been a mating pair there since 2004.

“They’re very cute. They’re little bow-legged, pigeon toed. Almost kind of like a little bulldog in a way, the way they kind of scurry down the beach,” she said with a laugh.

Sjöblom said she gets to know the birds and their habits when she watches them every day. And she added that being on the beach day in and day out helped her see a bigger picture.

“To me, it's not even so much about the bird. I see them really as just also a physical embodiment that's just in this little furry, feathery case that represents the health and the integrity of the Great Lakes and a healthy ecosystem.”

Most of the people strolling the beach have no idea that the little bird they see scurrying is one of the last of its kind.

Over the weekend, Sjöblom sent word that three of the four eggs hatched. 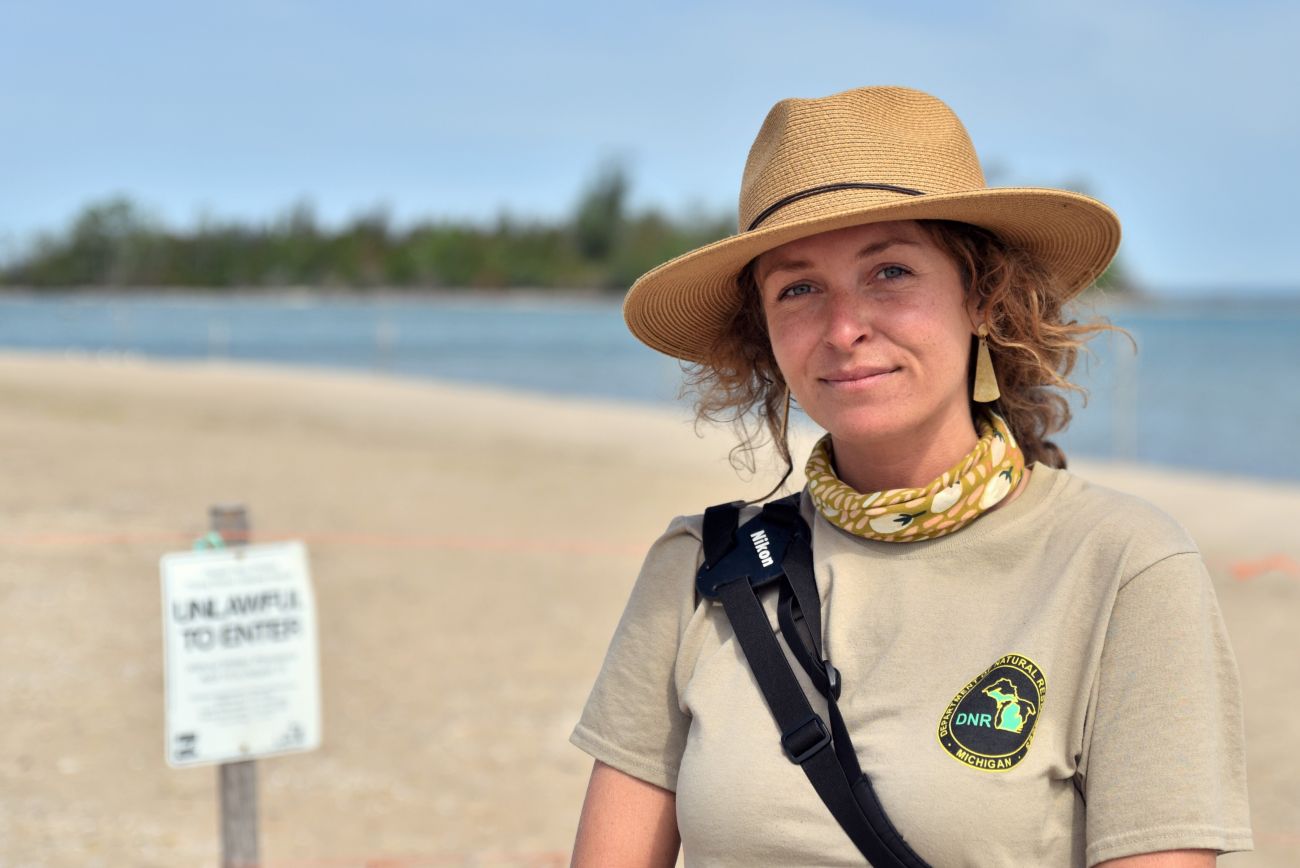 Restoring the population to the historic 200 to 300 nesting pairs is still a ways off. And it’s not at all clear how well the birds will do without human help when and if the bird is no longer on the endangered species list.

Francie Cuthbert with the University of Minnesota said there are a lot of challenges ahead, but she noted the Great Lakes states are working together on those challenges and funding from the Great Lakes Restoration Initiative will remain in place for the foreseeable future, helping to keep the piping plover monitoring in place.

“I really continue to be hopeful that we can move on in a positive way into the future.”