KENT CITY—From their home in rural Kent County, Glenn and Barb Cazier wake before dawn to the sound of semi-automatic gunfire echoing through the trees.

Daylight reveals destruction in the 6,200-acre Rogue River State Game Area, which abuts the Caziers’ property: Trees felled by shots sprayed into their trunks. Tens of thousands of lead bullets and plastic cartridges littering the forest. Enough bullet-riddled trash, from toilet seats to truck bumpers, to fill a 30-yard dumpster.

The rapidfire popping continues throughout the day, punctuated by the occasional window-rattling blast: Another tannerite target exploding in the woods.

But more bothersome than the noise and trash, the pair said, is the fear that it’s only a matter of time before someone gets hurt.

“Don't get me wrong,” said Glenn. “I shoot tournament archery. I shoot skeet. I belong to gun clubs. I have a shooting berm at my home.”

But there’s a difference, he said, between allowing target shooting on state lands and “letting anybody do whatever they want.”

The bermed roadside shooting area at the game area, once frequented by hunters stopping by to sight-in their rifles, has become a favorite among semi-automatic rifle, tactical shotgun and handgun enthusiasts who park there for hours at a time, unloading entire cartons of ammo in a single session.

On weekends, the crowds swell so large that shooters spill over beyond the berm, firing live rounds directly into the woods where hikers, mushroom hunters and anglers roam.

The resulting trash, safety hazards and noise complaints have become so concerning, the Michigan Department of Natural Resources on Thursday ordered the entire game area closed to target shooting, along with one wing of the nearby Muskegon State Game Area. 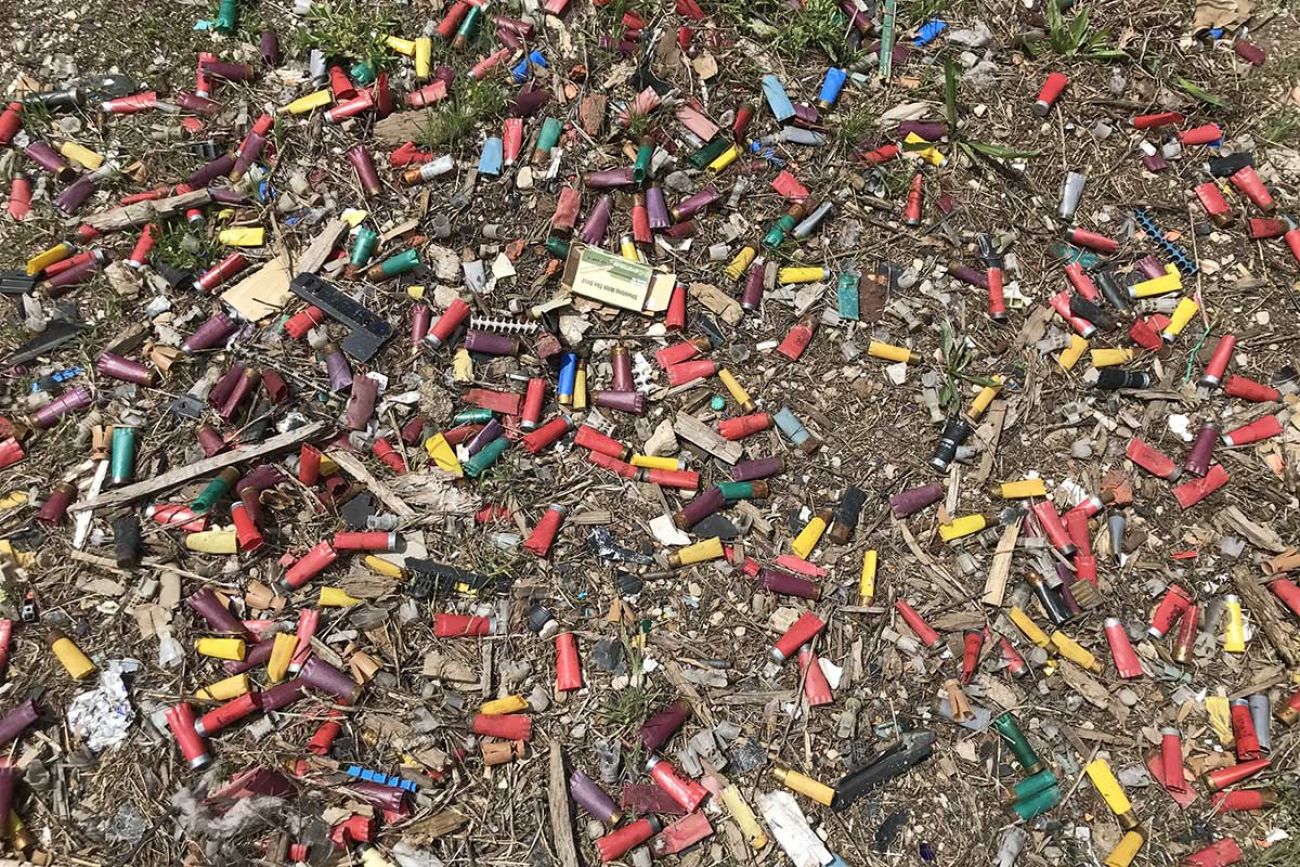 But the shifting user demographics on public lands aren’t limited to these two sites. And the resulting conflicts raise hard-to-answer questions about how best to manage Michigan’s recreational lands amid the changes.

As lands set aside with hunters in mind, state game areas have long been open to target shooting — something that is not allowed, for example, in state parks and recreation areas except at designated ranges.

The agency has crafted special rules for some problem areas, but in general, there are few restrictions on where people can shoot, so long as they use an approved target and follow basic rules.

As such, some amount of gunfire is simply a fact of life for nearby residents.

But in the decades since the Rogue was dedicated in 1951, times have changed. Hunting participation has waned in Michigan and nationally in recent decades, while gun sales have surged.

No agency keeps numbers on how many guns Michigan residents own, or what kind. But state statistics on concealed pistol licenses offer a glimpse into gun ownership trends.

Michigan State Police approved 136,408 concealed carry applications during the first six months of the fiscal year, which began October 1. That's on pace to shatter the record for most licenses approved in a single year, which is 170,961.

“It’s the whole change in society and who's shooting and why they’re shooting,” said Cazier, who was born and raised next to the game area, about 20 miles north of Grand Rapids.

One shooter at the Rogue over Mother’s Day weekend said he visits frequently to blow off steam. Gun users who shoot safely and clean up their mess shouldn’t be punished because of the bad actors, he said.

“It’s a shame to try and take away something free for people to do,” said the man, who declined to offer his name.

At the same time, the Rogue and other game areas have become increasingly popular with a variety of users, including hikers, mountain bikers, birdwatchers and foragers. That’s in part because game areas tend to be in the southern part of Michigan’s Lower Peninsula, where public lands are relatively sparse.

Traffic on the North Country Trail, a nationally-renowned hiking route that cuts through the Rogue and other state and federal public lands, “went up big time last year,” said Kenny Wawsczyk, regional coordinator for the nonprofit North Country Trail Association.

And with it, so have fears that a hiker could be injured by a shooter aiming blindly into the woods without a backstop. It’s not a problem confined to the Rogue. In multiple places where the trail cuts through state game areas, Wawsczyk said, “we've heard horror stories of people saying they heard bullets flying by their head or hitting the leaves and trees above them.”

DNR staff at first tried to absorb the crush of target shooters, posting signs outlining the state’s shooting regulations and sending staff out to pick up after people who hauled televisions, propane tanks, computer monitors or bowling pins into the woods, riddled them with bullet holes, then left them behind. 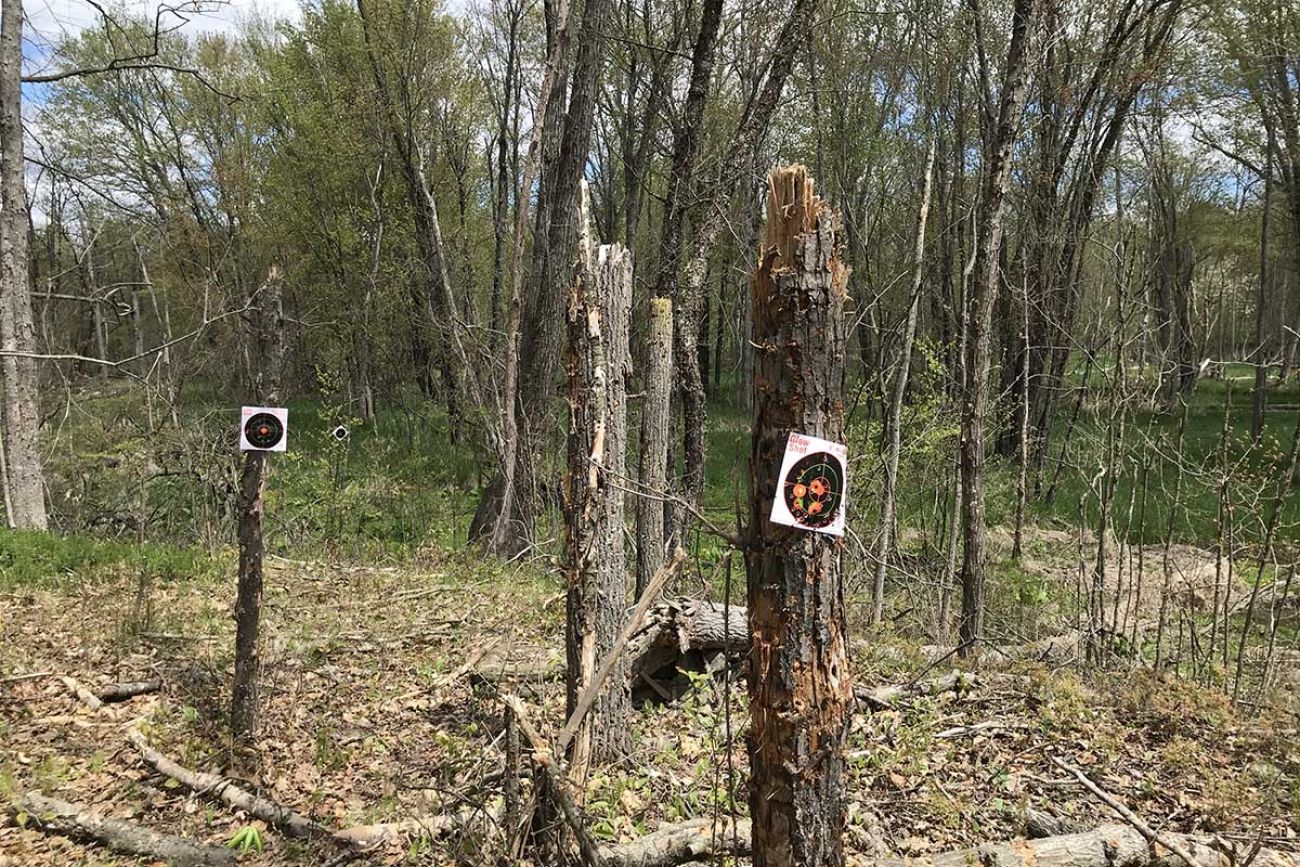 Targets affixed to mowed-down trees in the Rogue River State Game Area. When a bermed shooting area at the Rogue overflows, target shooters frequently spill over into the surrounding forest, where they aim toward the North Country Trail without a backstop. (Bridge photo by Kelly House)

So on Thursday, DNR Director Dan Eichinger signed a land use order banning target, trap and skeet shooting at the Rogue and part of the Muskegon. Both areas are still open to hunting.

After one too many bullets zinged past hikers in the Lost Nation State Game Area in southern Michigan’s Hillsdale County, North Country Trail managers re-routed a section onto a nearby road.

It’s not a problem confined to Michigan. Other states, from Wisconsin to Utah, have identified uncontained target shooting on public lands as a growing problem.

And in general, said Wesley Trimble, spokesperson for the American Hiking Society, public lands agencies across the country are grappling with how to absorb a simultaneous uptick in the number of people using public lands, and a shift in how those users want to recreate.

COVID-19 travel restrictions and fears about spreading disease during indoor gatherings created an “unprecedented” surge in outdoor recreation of all types, Trimble said. With more people sharing space on public lands, he said, “conflict between user groups is more likely to occur.”

It’s showing up in Michigan in the form of gun range disputes, debates where to buy and sell state lands, and how best to use them, and frustration at iconic parks where record-breaking visitation is taking a toll on infrastructure and natural resources.

Not everyone agrees that target shooting bans are the solution to conflict-prone areas like the Rogue.

Jody Hall, the Caziers’ neighbor, dubs himself “the local recycler” because he regularly visits the game area to fill gallon-sized ice cream buckets with empty brass casings. He re-packs them at home and then re-uses the ammo. Other neighbors scrap the brass for money.

Hall said he, too, is concerned about the trash and resource destruction. But closing the entire game area to target shooting, he believes, will only backfire by forcing gun users deeper into the Rogue, where it’s easier to avoid detection. 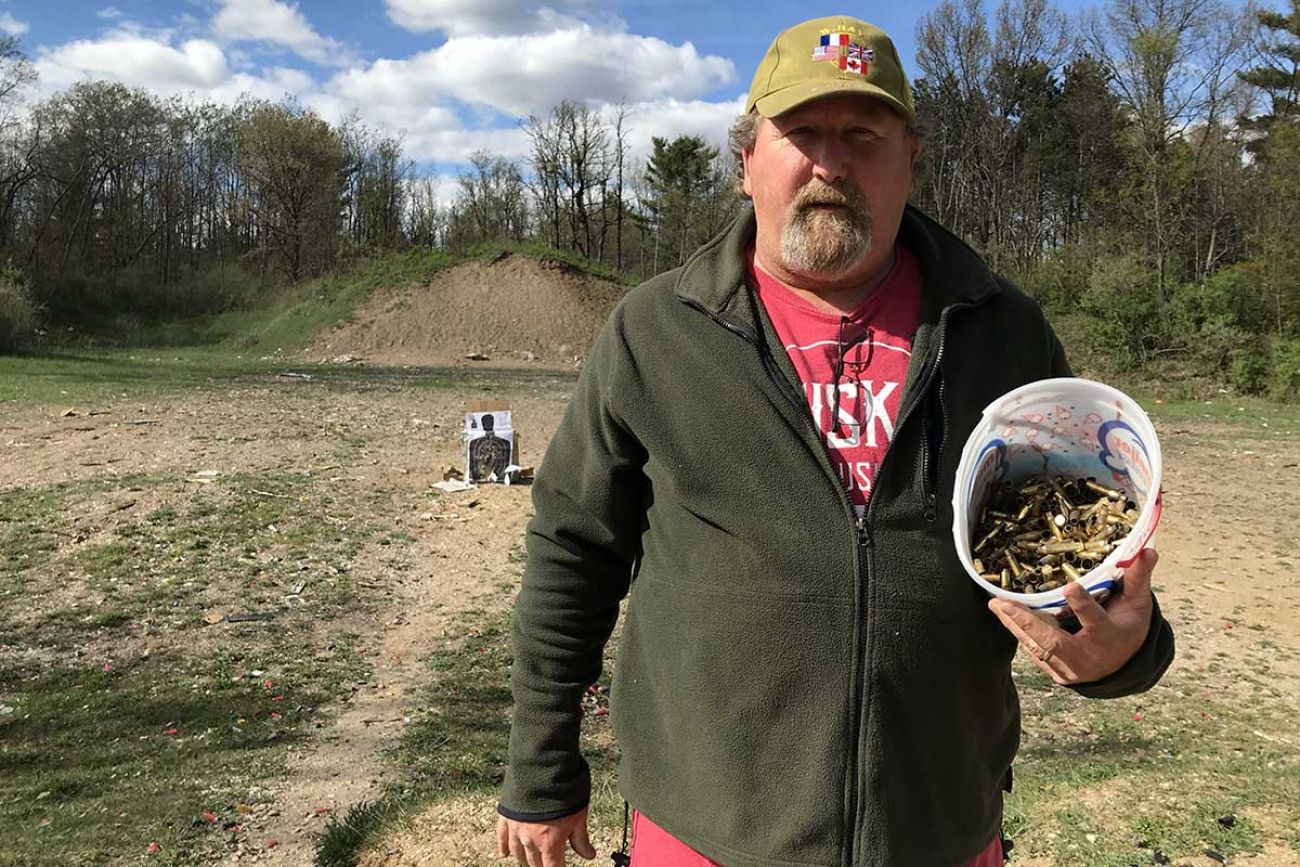 Jody Hall, a resident of rural Kent County near the Rogue River State Game Area, said he believes the problems there won’t be solved by banning target shooting in the Rogue. Hall benefits from the area’s popularity among gun enthusiasts, because he collects and re-uses their spent brass bullet casings. (Bridge photo by Kelly House)

“You want all these people out in the woods, shooting wherever?” Hall said.

Instead of banning target shooting across the entire game area, he said, the DNR should formalize the makeshift shooting range off 20 Mile Road, make safety upgrades to the site and staff it with officers to enforce the rules.

It’s already illegal to shoot at explosive targets, TVs and toilets. And target shooting is technically only allowed between 9 a.m. and 7 p.m. The issue, Hall said, is poor enforcement.

But such a solution wouldn’t help Sue Groenke. She and her husband, Kurt, live directly across the street from the unofficial range. Their dogs have been killed by stray bullets, she said, and they’ve endured some near-misses themselves. Plus, the noise in their yard is deafening.

“It needs to be shut down,” Sue Groenke said.

Niewoonder acknowledged some concern that by closing the Rogue and part of Muskegon to shooting, DNR will merely prompt gun enthusiasts to flock to the next-closest game area. The agency is already aware of several problem spots such as the Saranac State Game Area, Niewoonder said, and “our fear is that they will get worse.”

Cazier shares that concern. But there’s an easy solution, he said: The DNR could create blanket rules limiting where, when and how people can target shoot. Those who want to spend hours firing off guns for fun, he argues, should be redirected out of the open woods and onto official state ranges or private gun clubs where they won’t put other land users at risk.

But such blanket restrictions would be a tough sell, Niewoonder said. Some of the department’s funding comes from excise taxes on guns and ammo, leaving state land managers torn.

“We are supportive of shooting because we want people to be able to shoot there,” he said, “but also because it raises money for wildlife habitat.”

So what happens after the Rogue closes?

One of the men gathered at the game area over Mother’s Day weekend had an answer:

“I’ll just go over to Lansing,” said the man, referring to the Rose Lake State Wildlife Area in East Lansing. After taking a few shots at a paper target affixed to a barrel, he handed the long gun to a companion who was clearly a novice.

“Am I even aiming right?” she asked before pulling the trigger eight times.

All but one shot missed the barrel and went sailing off into the void.