Bert Seyfarth is concerned about climate change, but the solar panels on the roof of his East Lansing home aren’t just a symbol of environmental awareness, he said. They’re a financial investment.

The panels supply the bulk of his home electricity, and when he’s not using power, he sells the excess energy back to the grid, nearly eliminating an electricity bill that would otherwise cost him about $1,100 annually.

But due to a state policy that limits rooftop solar owners’ ability to sell their excess power, the financial math that motivates Seyfarth might not be available for future customers of Consumers or other Michigan investor-owned utilities.

Under state law, utilities are required only to reimburse private customers for renewable energy given back to the grid until the sum of that energy reaches 1 percent of a utility’s average peak demand. That allotment is further broken down by size, with installations that produce small quantities of energy, such as residential solar arrays, allowed to make up .5 percent. Throughout Michigan, utilities are now bumping up against those caps.

Consumers Energy hit its cap this fall. Upper Peninsula Power Co. (UPPCO), the U.P.’s largest utility, is about to hit its residential cap for a second time after raising it to 2 percent as part of a settlement last year. Solar advocates say caps are looming in other territories, too, including those of DTE Energy, removing a powerful incentive for homeowners to invest in solar.

Legislation by Sen. Ed McBroom, R-Vulcan, that aims to lift the current cap languishes in committee with just one scheduled working day left this session, leaving solar industry advocates warning of a looming cliff for an industry that has seen steady growth in recent years.

“Our installers are small businesses that create good-paying jobs,” said Laura Sherman, president of the Michigan Energy Innovation Business Council, which advocates for renewable energy. “And in all likelihood, some of them are going to lose their jobs.”

Utilities contend the cap is necessary because rooftop solar owners are compensated too generously for the power they feed to the grid, resulting in a subsidy that other customers are forced to shoulder. 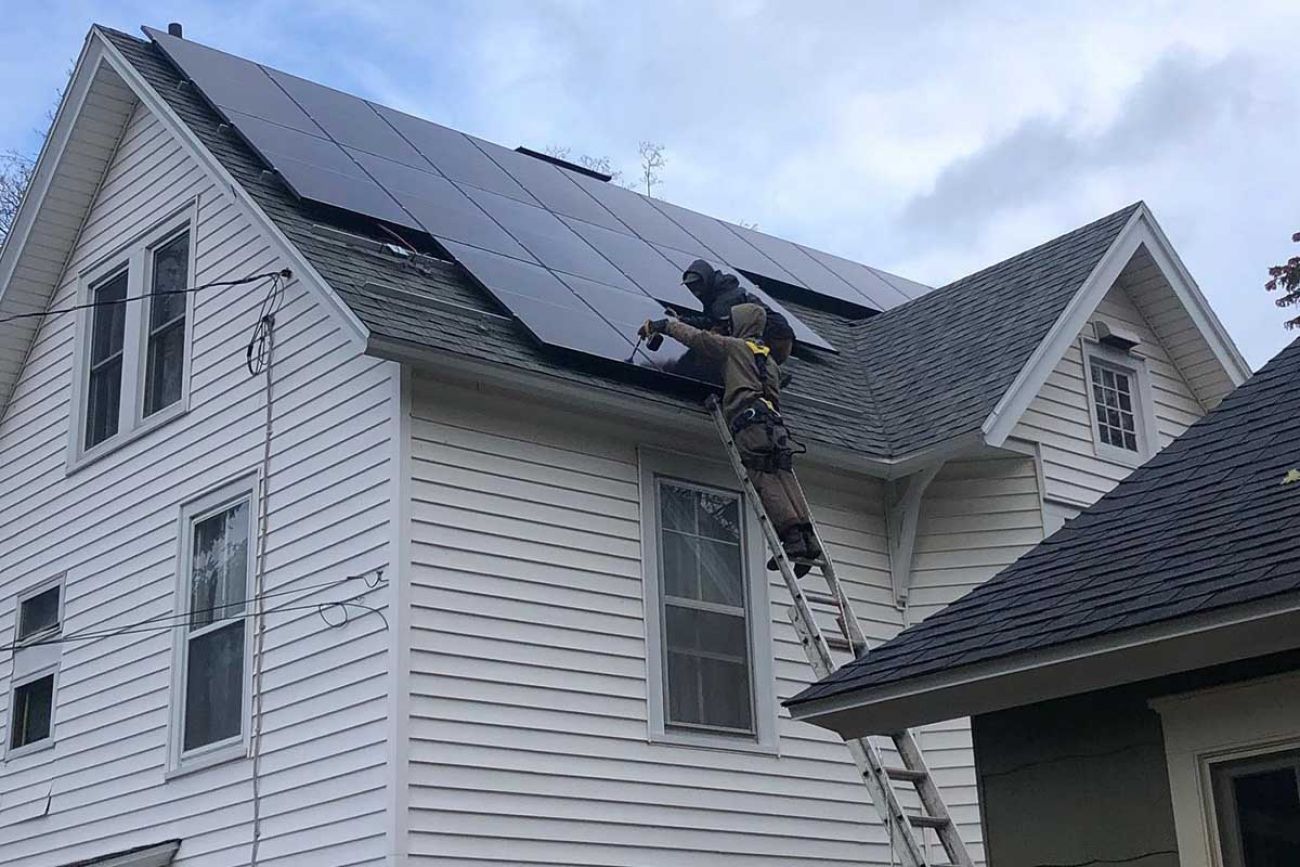 The economics of solar

In the Upper Peninsula, where electricity rates are among the nation’s highest, Peninsula Solar owner Ian Omsted’s Marquette-based business was booming.

UPPCO’s high rates make rooftop solar an enticing alternative for residents who can afford upfront installation costs that can run well above $10,000. Low-interest loans through the nonprofit Michigan Saves program further boosted business by making solar panels accessible even to those without the cash to front a project, Olmsted said.

“Up here, solar is an actual money-saver,” he said. “It’s not just about being good to the environment. I have customers who were paying a $350-a-month electricity bill.”

Michigan’s early-adopting rooftop solar owners are compensated for the energy they contribute to the grid through a “net metering” regime that values it at the retail price that electric customers pay to draw energy from the grid.

In 2018, the most recent year in which state figures are available, an additional 1,942 Michiganders enrolled in net metering programs to sell their excess energy back to the grid, a 59 percent increase over the previous year, bringing total net metering participation in Michigan to 5,219 customers.

Utilities have long argued that this compensation is too high because it fails to charge solar customers for using the power lines and other infrastructure that deliver their energy to the grid, and doesn’t account for other services utilities provide. In a nod to industry concerns, legislation passed in 2016 required Michigan to shift to a distributed generation program, which shrinks credits for customers who send surplus power onto the grid in an attempt to account for those costs.

The Michigan Public Service Commission is phasing in the new compensation program on a utility-by-utility basis as part of a larger effort to address rates utilities charge customers.

When UPPCO agreed to increase its cap to 2 percent as part of a settlement before the commission, it also reduced compensation for rooftop solar owners. But demand for new installations remains strong, and UPPCO is nearing its higher cap.

French said even at the lower rate, UPPCO believes rooftop solar owners aren’t paying their fair share to use the utility's infrastructure. If the cap is raised, he said, non-solar customers’ rates will increase to make up the difference.

But Olmsted, of Peninsula Solar, contends his customers are paying their fair share, and helping Michigan achieve its greenhouse gas reduction goals in the process. With the cap looming, he said, uncertainty about the financial viability of rooftop solar has already slowed his business.

“We're shifting a lot of marketing money and people to Indiana and Illinois,” he said.

Consumers announced this month that it will consider voluntarily raising its cap to 2 percent in January if it gets its way in an ongoing rate case before the Michigan Public Service Commission. A decision in that case could come as soon as this week.

The company wants permission to increase revenue by $244 million annually, resulting in an average electricity rate increase of 14 percent for residential customers, while compensating solar owners slightly more than half of retail value for the energy they contribute to the grid.

“We still think that has a fairly significant subsidy [to solar users] embedded in it,” said Brandon Hofmeister, Consumers’ vice president of governmental, regulatory and public affairs.

Though rooftop solar owners buy less electricity than the average customer, Hofmeister said, they benefit equally from Consumers’ investment in infrastructure that ensures customers have reliable electricity amid fluctuating demand.

“We think it’s appropriate that you pay your proper and fair share for that,” Hofmeister said, “so other customers aren’t paying more.”

Rather than raising caps under the current compensation regime, he and other utility representatives said they first want to see a new compensation model that charges rooftop solar owners more for those costs.

Solar advocates respond that the current method of compensating rooftop solar owners dramatically undervalues the benefits they provide, and overestimates solar’s use of utility infrastructure. For example, Sherman said, because rooftop solar energy travels short distances on power lines before it’s used by neighboring homeowners, it suffers fewer “transmission losses” along the way—an increase in efficiency that translates into cost savings for utilities.

“Retail net metering is not even fully compensating for those benefits,” Sherman said.

Solar advocates hope the imminent decision in the Consumers rate case will help their case. An administrative law judge earlier this fall recommended that the commission order Consumers to conduct a “value of solar” study that would establish a fair rate for energy that owners of small solar arrays send to the grid.

But Sherman, of the renewal energy council, said permanently lifting the cap — both in Consumers territory and statewide — remains her top priority. With McBroom’s bills destined to die this legislative session, she’s begun strategizing with rooftop solar supporters in the Legislature about introducing similar legislation next session.

“If there’s a cap, nobody can do anything,” she said, “so who’d care what the value is?”