MIDLAND — The owner of a Gladwin County dam that failed and prompted widespread evacuations Tuesday was cited repeatedly by federal officials for safety violations, including failing to fix spillways used to prevent flooding, records show.

Federal authorities revoked the licenses of owners Boyce Hydro Power LLC in 2018, alleging that it “failed for many years to comply with significant license and safety requirements, notwithstanding having been given opportunities to come into compliance.”

In court papers and federal records, regulators wrote that Boyce Hydro of Midland had a “history, going back to 2004” of missing deadlines to make repairs on the Edenville Dam that failed.

“That long history of noncompliance ranges from failing to report structural instability to inadequate water quality monitoring — but Boyce Hydro’s failure, in particular, to increase the spillway capacity to address flood risk has raised serious concerns about public safety,” the Federal Energy Regulatory Commission wrote in a federal lawsuit over regulations in 2017.

The dam’s failure following heavy rains prompted a massive evacuation of thousands in mid-Michigan that was ongoing Tuesday night, and torrents of water threatened another dam and triggered the immediate evacuation in and around Midland.

Michigan Gov. Gretchen Whitmer announced plans to declare a state of emergency after rising water from heavy rains punched a huge hole in the Edenville dam which holds back Wixom Lake from the Tittabawassee River.

“This is unlike anything we've ever seen before,” Whitmer said during a Tuesday evening press conference. “I feel like I've said that a lot over the last number of weeks, but this truly is a historic event that is playing out in the midst of another historic event and so we need to make sure that we keep our wits about us and work on this together.”

Whitmer said downtown Midland could be under as much as 9 feet of water by noon Wednesday and said the evacuation included parts of south and west Midland but also the Dow Chemical facilities and nearby Thomas and Saginaw townships in Saginaw County.

Residents near the dams have been ordered to move and Whitmer implored them to heed the warnings. “If you are in those areas you must evacuate as soon as possible. Please get somewhere safe now,” she said.

“This is serious and it is time for people to take action to keep themselves safe and to evacuate. We still need thousands of people to take this action,” Whitmer said. “If you have a relative or a friend somewhere else in the state that you can go and stay with please go to their homes.”

Four emergency shelters were set up around Midland and the State Police, the Red Cross and the Michigan National Guard will be providing assistance, she said.

“I don't want anyone to go to bed tonight not knowing how serious the situation is and that it's time to make sure that they evacuate right now,” she said.

Midland County said weather forecasters are predicting the river will crest Wednesday morning at 38 feet — 4 feet above the highest recorded ever during a flood in 1986. That flood was considered a once-every-500-years flood.

Aerial footage of the Tittabawassee River near Midland showed dramatic flooding of homes, businesses and infrastructure after the dam was breached Tuesday evening. The dam is located in Gladwin County, about 20 miles northwest of Midland. 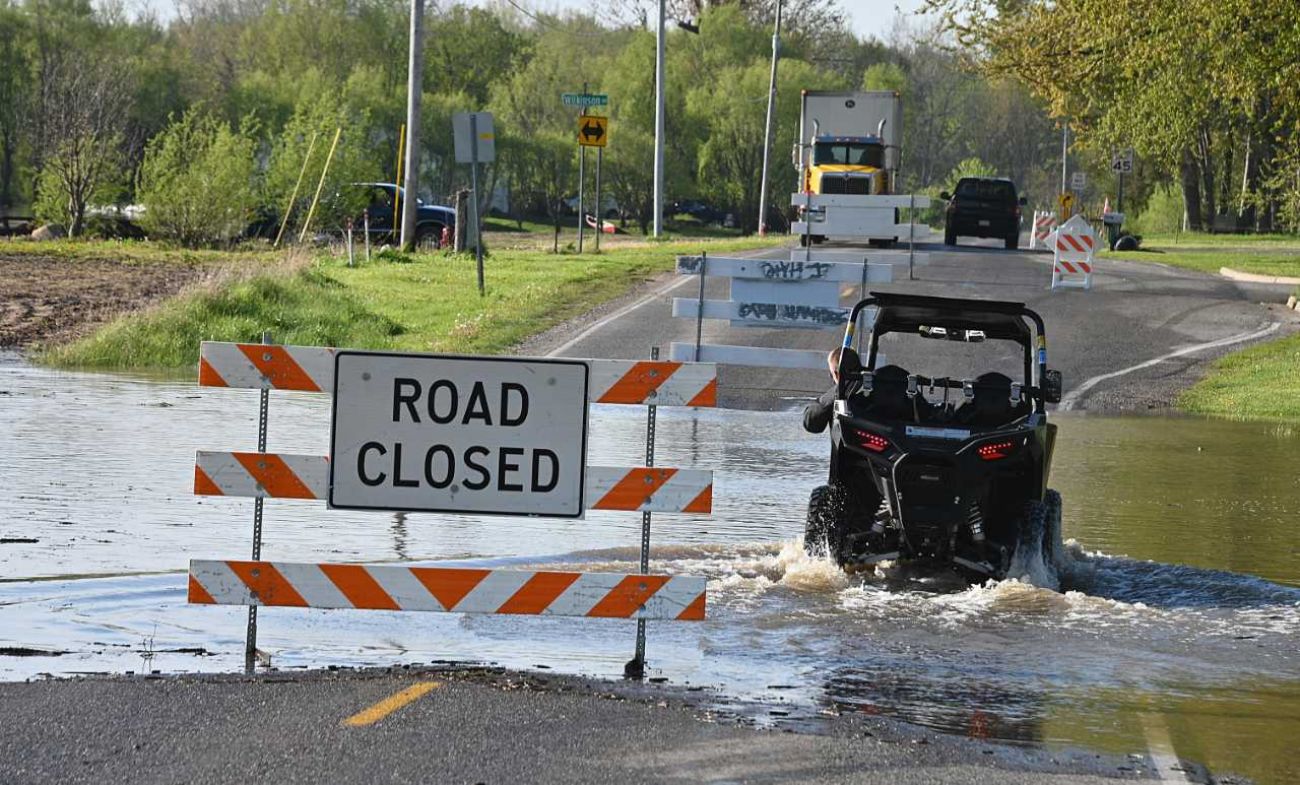 County 911 officials have advised area residents to evacuate immediately. Along with the Edenville dam, two smaller dams — the Smallwood and Sanford dams — also failed, according to the Michigan Democratic Party.

The evacuation covers an area that straddles the Tittabawassee from the Sanford dam to just southeast of Midland and it includes Windover High School and the residential neighborhood west of downtown Midland.

The Midland area got more than 4 inches of rain over two days ending Tuesday morning, according to the National Weather Service.

The Edenville dam can store over 21 billion gallons of water, according to the Army Corps of Engineers. It was built in 1925 and is largely used for flood control. It is owned by Boyce Hydro Power, LLC, federal records show.

Records show Boyce Hydro submitted paperwork in 2011 to the Federal Emergency Regulatory Commission for major repairs that were slated to last through 2020.

Instead, federal regulators moved to revoke the company’s license in 2017, writing: “The Edenville dam has a high hazard potential rating, which means a failure of the project’s works would create a threat to human life and/or would cause significant property damage.”

“Boyce Hydro has a long history of non-compliance with those terms and conditions and with related provisions in the FPA and Commission regulations and orders,” the federal agency wrote on Feb. 26, 2018.

The biggest issue, regulators wrote, was the failure to increase spillway capacity to ensure the dam would not fail during a major flood, records show.

“Current spillway capacity can only pass about 50 percent of the PMF (possible maximum flood) of the Edenville Dam,” federal regulators wrote in a 2018 report.

The revocation of the license prompted litigation that lasted for years.

Earlier this year, Boyce agreed to sell the dam and others over the next two years for $9.4 million to the Four Lakes Task Force, an authority working for Midland and Gladwin counties.

Former State Rep. Sam Singh, D-East Lansing, wrote on Twitter late Tuesday that “Boyce Hydro needs to be held accountable for the structural failure of these dams. Their consistent disinvestment and fighting with regulators leads to devastation.”

In 2019, state Sen. Jim Stamas, R-Midland, secured $5 million in state grant money to buy and repair dams in Midland and Gladwin counties, money that would help fund the Four Lakes Task Force, Midland County Administrator Bridgette Gransden said. The repairs had not yet been made.

"Everyone was aware that repairs needed to be made on those dams," Gransden told Bridge late Tuesday.

At the West Midland Family Center in Shepherd, west of Midland, about two dozen evacuees milled about the parking lot and munched on bagels inside the center to pass the time while they awaited news on the fate of their homes.

They’d fled in a hurry after first responders came knocking on the door Tuesday evening, or driving through the neighborhood in fire trucks with sirens blaring, advising them to leave before the waters came.

Janet Parsons and her son, Sean Parsons, stuffed some clothes, medication and toiletries in two plastic bags, and hit the road. During the 1986 flood, months after Parsons bought her home in Midland near the confluence of the Chippewa and Tittabawassee rivers, the water came up to her lawn. But there was a key difference in 1986: The dams held. 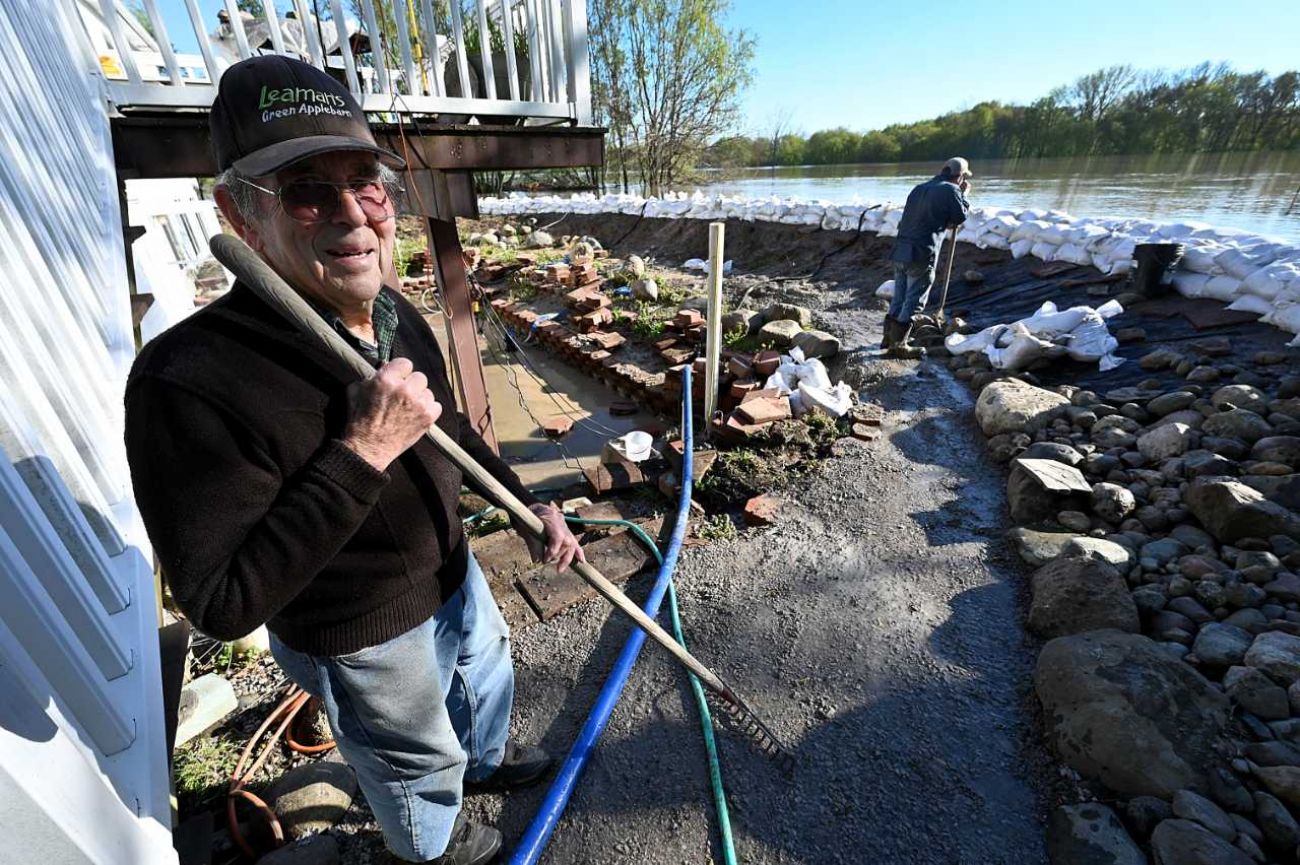 This time, Parsons is expecting the waters to do more damage.

“I just hope we don’t lose everything,” she said.

She and others evacuated before the floodwaters arrived, and had no idea whether their homes would stay dry through the night. As they talked, they scrolled cellphones, watched social media video footage and read news reports.

How many dams have failed? Where is the power out now? Which roads are passable? Did animal control officers manage to get to the house and retrieve dogs they left behind?

Carla Sexton wondered if she could get to her doctor’s appointment Wednesday afternoon in downtown Midland?

The Edenville resident, 58, has been in and out of the hospital with blood clots in her legs and lungs. Now, she doesn’t know whether she’ll have a home by the morning.

“I just keep telling myself it’ll all work out,” she said. But given all the bad things she said she had heard about the structural integrity of Edenville and Sanford dams, she’s not so sure.

Greg Dorrien, executive director of the Midland Family Center, said poor maintenance at Edenville has been a source of community anxiety for years. When the Four Lakes Task Force took it over, residents were hopeful the dams would receive needed upgrades.

“Unfortunately," he said, "I think this flood happened before they could finish.”