Mid-Michigan smacks down wind energy. Will it harm the state’s green plan?

Renewable energy had a bad election day in Michigan, and it could lead to discussions of the state taking a more active role in the siting of wind turbine and other projects.

Four referendums that would have established guidelines for wind turbine installation were defeated Tuesday in townships in mid-Michigan’s Montcalm County. In the same county, a solar referendum was defeated in one township, after a similar referendum setting guidelines for utility-scale solar projects in another township failed during the August primary.

All lost by at least a 2-1 voting margin.

In addition, seven officials in three townships who were considered supporters of a proposed wind turbine project were successfully recalled, and replaced by residents who are against the siting of turbines in the area.

The votes cripple the prospects of a wind energy project under consideration in the rural county, but also have implications across the state, as Michigan rushes to expand green energy.

“What happened in Montcalm is part of a larger chorus of (grassroots opposition) to these projects,” said Ed Rivet, executive director of the Michigan Conservative Energy Forum, a nonprofit that advocates for clean energy. “As that message replicates across the state, it’s going to have implications at a higher level.”

In 2021, renewable energy sources provided about 11 percent of Michigan’s net electricity generation, with most of that (77 percent) coming from wind. There are 1,658 turbines across the state churning out 3,527 megawatts, enough electricity to light at least 1.4 million Michigan homes last year.

The power produced by renewable sources in Michigan has jumped 77-fold since 2010, and an additional three wind farms and three solar parks are expected to be running by year’s end.

Consumers Energy and DTE both set goals of achieving net-zero greenhouse gas emissions by 2050. The Biden administration set a national goal of 100-percent carbon pollution-free electricity by 2035. Gov. Gretchen Whitmer introduced a plan to generate 60 percent of the state's electricity from renewable resources and phase out coal-fired power plants by 2030 — seven years from now.

On Wednesday, one day after winning re-election, Whitmer listed expansion of clean energy as one of her goals for the next four years. In a few months, she will have a Democratic House and Senate that will be more amenable to such plans.

Meeting those ambitious goals requires a rapid expansion of wind and solar farms. But expansion is opposed by some residents unhappy about looking at wind towers that can be seen for miles, and solar farms that can expand across hundreds of acres of farmland. Some residents also have concerns about possible health effects from wind turbines.

Beyond producing carbon-free power, renewable projects provide money to farmers who lease land to developers and utility companies, as well as tax support to local schools and governments. 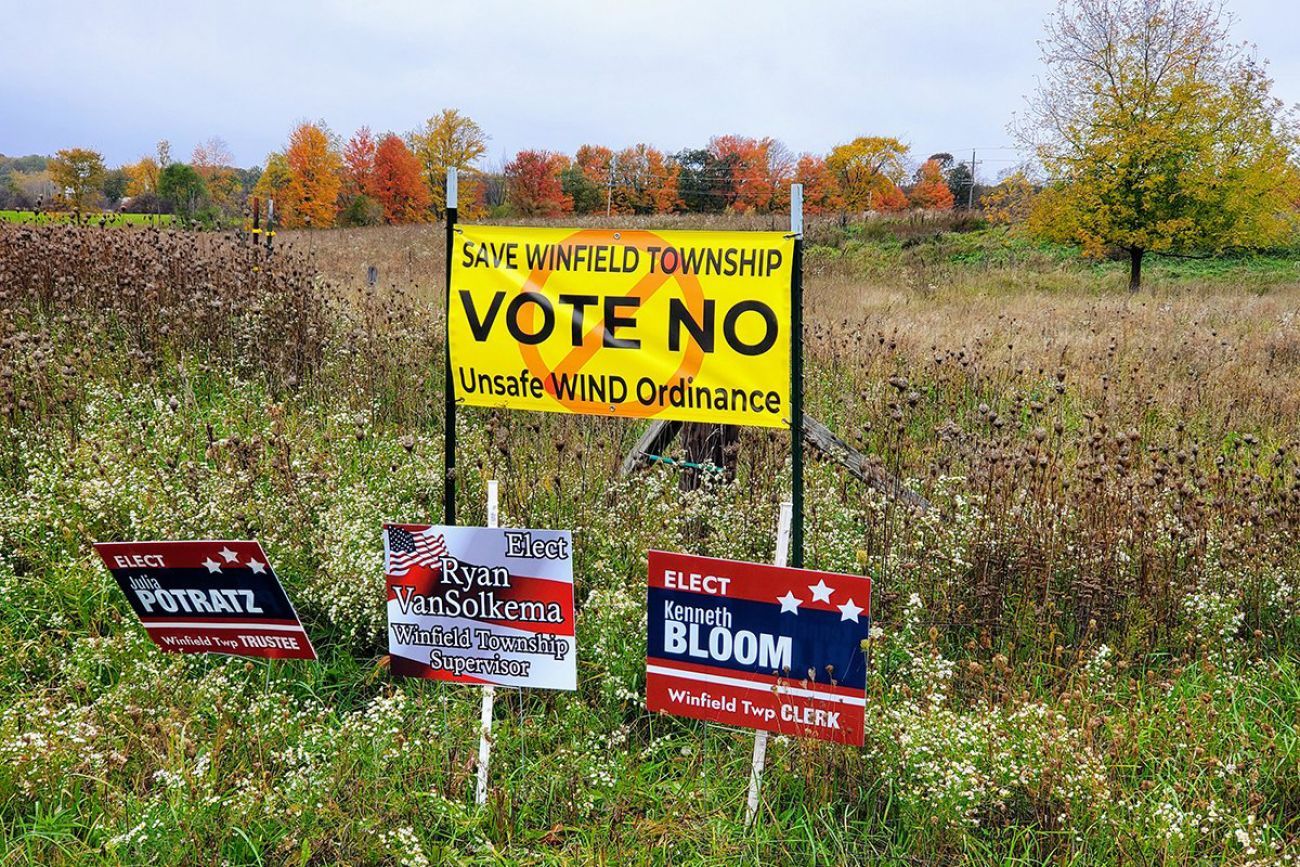 The defeat of five renewable energy referendums in Montcalm County is one reason some green energy advocates hope the state steps in to become more assertive. (Courtesy photo by Elisabeth Waldon/Daily News)

In Montcalm, as many as 75 wind turbines were proposed across 11 townships. The developer, Apex Clean Energy, based in Charlottesville, Va., said its preferred height for the turbines was 656 feet. At that height, the turbines would be 100 feet taller than the Washington Monument, and more than double the height of the Statue of Liberty.

Before the votes, Apex Senior Development Manager Albert Jongewaard told Bridge Michigan it’s possible the company might go to court to battle referendum losses, arguing that farmers have a right to erect wind turbines on their property if they want.

Jongewaard also encouraged the state to step in to help renewable energy projects get off the ground.

Currently, wind and solar projects must be approved by township officials – such as local planning boards and township trustees. In some Midwest states, including Ohio, Wisconsin and Minnesota, site approval for utility energy projects is done at the state level.

Michigan has a tradition of “local control” on matters ranging from schools to zoning, but Rivet said there is growing discussion in Lansing of whether the state needs to take the renewable energy reins.

“I don’t see the trend (of local opposition) suddenly disappearing,” Rivet said. “The more that goes on, the more it will lead to a policy discussion.”

Charlotte Jameson, chief policy officer for the Michigan Environmental Council, told MLive there is a growing consensus that the state must become more involved in the approval of wind and solar projects if Michigan is going to meet its renewable energy goals

“The siting issue is definitely one where you have environmental groups, utilities and labor in agreement that there needs to be some kind of solution here,” Jameson said.