The climates of Detroit, Flint, Lansing, Grand Rapids, Saginaw, Traverse City in 60 years could be similar to the current climate of Chester, Pennsylvania near Philadelphia, according to a study by Matt Fitzpatrick of the University of Maryland Center for Environmental Science and Robert Dunn of North Carolina State University.

Montreal could be as much as 17 degrees warmer during the winter; Toronto could feel more like New Jersey.

While some of the predicted temperature increases could be on the high side, it’s not absolutely impossible to reach them, said Brent Lofgren, a physical scientist for the National Oceanic and Atmospheric Administration’s Great Lakes Environmental Research Laboratory in Ann Arbor.

“Most predictions are between 3 and 4 degrees Fahrenheit, as a global average,” he said. “Even that much of an increase is thought to be a threshold of seriously damaging results.”

“It’s emitted from the burning of fossil fuels,” he said. “What’s considered the pre-industrial level of carbon dioxide is 280 parts per million and the current number is about 405 parts per million.” 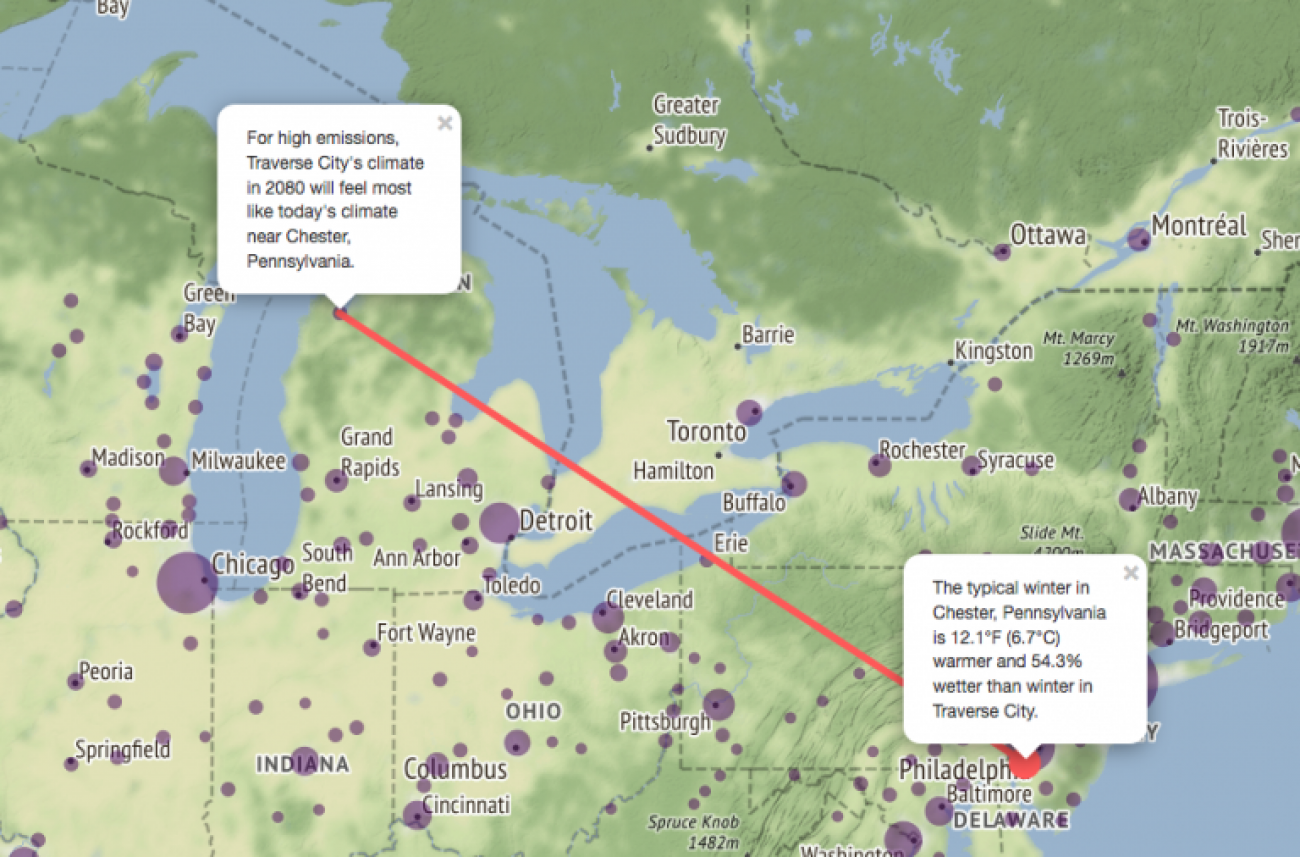 That’s a big increase over two centuries, he said.

One impact increasing temperatures could have on the Great Lakes region is the overturning of the lake water columns, Lofgren said.

A water column is a conceptual column of water from the surface of the lake to the bottom sediment.

“Historically, it is done in both the fall and the spring. Mixing through the water columns brings nutrients up from the bottom and oxygen down from the top, which is important for biological activity.

“But the prediction is that that’s going to happen earlier in the spring and later in the fall, and in some cases they might actually meet in the middle and overturning will not happen in every year,” he said.

A temperature change of 3 to 4 degrees is also big enough to push back annual events, such as bird migrations and the developmental stages of plants, Lofgren said.

Many of the study’s climate predictions for Michigan anticipate not only warmer weather, but more precipitation.

More precipitation is likely, particularly during the winter and spring, and it’s predicted that a greater share of the precipitation will come in strong downpours, Lofgren said.

“We’re expecting to see more events of too much rain,” he said. “That means increased flooding, that means erosion and runoff of nutrients into the rivers and lakes.”

“The biggest concerns that we have are some of the other effects that come in association with climate change,” said Laura Campbell, the manager of the Agricultural Ecology Department for the Michigan Farm Bureau. “And some of those we’re seeing already.”

The introduction of new invasive species is another major concern.

“We’re worried about getting more of those than we have had in the past, because due to climate change, they can potentially find suitable habitat further and further away from where they had traditionally been,” she said.

Another worry for farmers is an increase in intense rainstorms.

“That’s causing a lot of flooding problems, particularly during those sensitive spring times when we’re trying to get out into the field and trying to fertilize crops,” Campbell said. “If your field is under water, the nutrients are going straight into the river.”

Drier summers are also an area of apprehension, and a lot of farmers are becoming interested in putting in irrigation systems as a backup measure, she said.

Temperatures are another concern, although slightly less so as farmers have dealt with varying temperatures for a long time. The problem lies with dramatic swings in temperature in a short amount of time.

“In 2012, Michigan lost almost its entire cherry and apple crop,” Campbell said. “We had 80 degree temperatures in March and then the weather returned to a more normal pattern, and we had a bunch of frost that killed all of the buds that were starting to emerge on the trees.”

This story is courtesy of Great Lakes Echo, a publication of the Knight Center for Environmental Journalism at Michigan State University.