Walk-in wait times are still higher than in recent years, but Benson hopes a number of changes coming in 2020 will help reduce them. (Bridge photo by Riley Beggin)

Michiganders can officially get in and out of any Secretary of State branch office in under 30 minutes — with an appointment. For walk-ins, however, long waits are still the norm.

Michigan Secretary of State Jocelyn Benson announced Thursday that her office had fulfilled a central campaign promise: a guarantee that no one would have to wait more than a half-hour for customer service at branch offices.

During her 2018 campaign, Benson did not specify that her 30-minute pledge would only apply to people who made appointments. But Benson argues the pledge is fulfilled because people can now make appointments online or over the phone at all 131 branch offices — up from 43 when she first entered office — and more same-day appointments will soon be available.

“There is no wait time for anyone who makes an appointment,” Benson said at a press conference. “We encourage everyone merely to arrive a few minutes early, and they will be seen on time and finished within 30 minutes or less.”

People are taking advantage of the appointment system even without a robust outreach campaign, Benson said: Transactions done by appointment are up 35 percent over last year.

Benson’s announcement Thursday follows Bridge’s reporting in August that revealed that wait times have increased at Michigan Secretary of State branch offices for the past several years, including under Benson through that point in 2019.

Indeed, wait times for walk-in customers still continue to grow at a similar rate to years past, leaving some offices in highly-populated areas with wait times that have exceeded two hours. It may also take weeks to get an appointment at busy branches, though Benson’s office encourages people to look for appointments at other branches than the one they often think of as their “home” branch.

Benson said she’s “of course aware” that people who walk into branch offices still face long waits. “I do not think for a second that our work is done. In fact, we’re just beginning,” she said.

She said roughly half of all people who visit branches could instead complete their transactions at a self-service kiosk or online instead. In 2020, the department plans to implement a number of changes that aim to divert unnecessary office traffic.

The department also plans to expand the number of same-day appointments available for those who don’t make an appointment ahead of time.

“You’re going to see next year as we start to implement the solutions ... not only significantly less traffic in our branch offices, significantly more efficiency in how the appointments are utilized, but we hope happier citizens and happier employees,” Benson said.

While those changes are expected to help improve wait times for walk-in customers, Benson didn’t directly answer on Thursday whether walk-ins would also get a 30-minute guarantee. She said the implementation of the statewide appointment system fulfills her campaign pledge.

Part of Benson’s message was to create a cultural change in the way the public thinks about the Secretary of State: Make appointments, make them early, and take advantage of other ways to get business done.

But that data isn’t very accurate, she said. The department currently uses two separate systems to track wait times in the branches. In the busiest branches, it only tracks the time between when someone checks into the online wait system located at the branch and when they’re served. In smaller branches, the department relies on employees to track wait times for random customers, which has the potential for human error.

The department is hoping to improve that system as well, Benson said, so it can more  accurately show live wait times for those considering which branch to visit and more accurately record how wait times are changing over time.

Benson inherited “a department that had clearly suffered from years of neglect,” she said, noting that 46 percent of branch offices have closed since the 1980s, 40 percent of branch positions have been cut since 2001 and staff training was cut in 2006.

Early next year, Benson said she plans to announce “a robust legislative agenda to improve customer experience where we need legislative changes,” including requesting $9 million to improve services for car dealerships, vehicle fleets and other commercial customers.

“If we are successful in getting the word out about how people can choose to spend their time, then even folks who walk in (to branches) will have a better experience than they’re having now,” said spokesman Jake Rollow. “That’s going to take time, no doubt about it.” 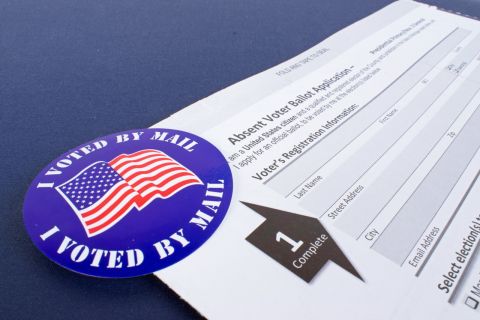 As Trump questions mail-in voting, records show Michigan has 225,000 more registered voters than voting-age residents. That is no proof of fraud, which experts say is rare, but some clerks say Michigan’s rolls need to be cleaned to increase confidence in elections. 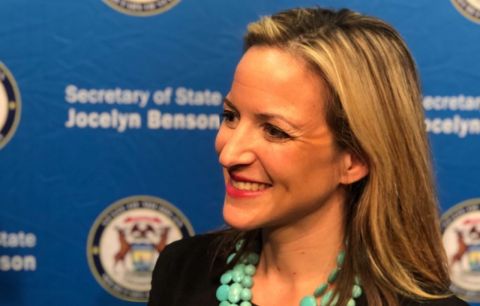 A conservative activist sues Michigan’s top elections officials, alleging that 16 of the state’s 83 counties have registration rates of more than 90 percent of eligible voters. A state spokesperson calls the suit a publicity stunt. 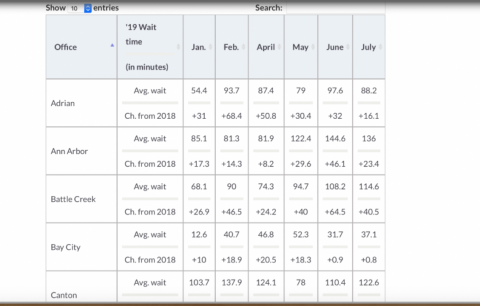 Check out wait times at your Michigan Secretary of State offices

Lines have gotten longer so far this year, compared with wait times in 2018. This Bridge database allows you to see how times have changed in branch offices near you.

My husband and I moved to Negaunee Township 4 yrs ago this July from downstate, where recent residences included TC, Detroit and Gaylord; each SOS office visit here was such a relief comparatively speaking (although people around us still complained), until this last August——there was no clear way to make an appointment, the kiosk at the door was a mystery, and then there was another initial line to wait and go through before you could sit and wait for the business you were there to do; so much more time spent, so much confusion about what the processes were, and so frustrating. I don’t know what more to say, except that downtown Detroit seemed to know what they were doing