Absentee ballot drop-off boxes may be the latest front in partisan election battles in states including Texas, North Carolina and Iowa, but they are proliferating in Michigan with little such controversy.

Buoyed by the coronavirus, fears of postal slowdown and a record 1.6 million absentee ballots in the August primary, Michigan communities large and small have installed absentee boxes as a safe alternative to in-person voting.

Absentee ballots began being mailed to voters in late September, and at least 3 million of the state’s 7.7 million registered voters are expected to vote by mail in the Nov. 3 election.

“This is a safe and secure way for voters to cast their absentee ballot,” said Joel Hondorp, clerk of Grand Rapids, which announced six drive-up ballot boxes on Sept. 21. Four are outside city libraries.

In Lansing, the city has added 13 drop boxes, with many installed curbside to allow drivers to return ballots without leaving their cars.

“The voters definitely appreciate them,” said Lansing City Clerk Chris Swope, who is also president of the Michigan Association of Municipal Clerks.  “They don’t have to ask questions about whether they have the right postage to mail it in or how much time it would take to vote in person.”

Detroit, which had only two downtown drop-off boxes for the August primary, expects to have 21 at election centers throughout the city by Monday, with as many as 19 more later in the month.

Even so, plenty of Michigan communities have yet to install the boxes. Advocacy group Voters Not Politicians has launched a website, michigandropbox.com, to track drop box locations. As of late last week, fewer than 300 communities statewide still lacked boxes, said  Kim Murphy-Kovalik, a volunteer and field director for the group.

Some have security questions

The widespread availability of ballot drop boxes in Michigan stands in contrast to Ohio, where Secretary of State Frank LaRose had limited each of the state’s 88 counties to one drop box, saying he was following state law. A county judge’s ruling that the limit was “arbitrary and unreasonable” has been put on hold until the outcome of LaRose’s appeal.

In Texas, Gov. Greg Abbott, a Republican, late last week ordered the removal of drop-off boxes statewide, limiting them to just one per county in a state where they can cover hundreds of miles. 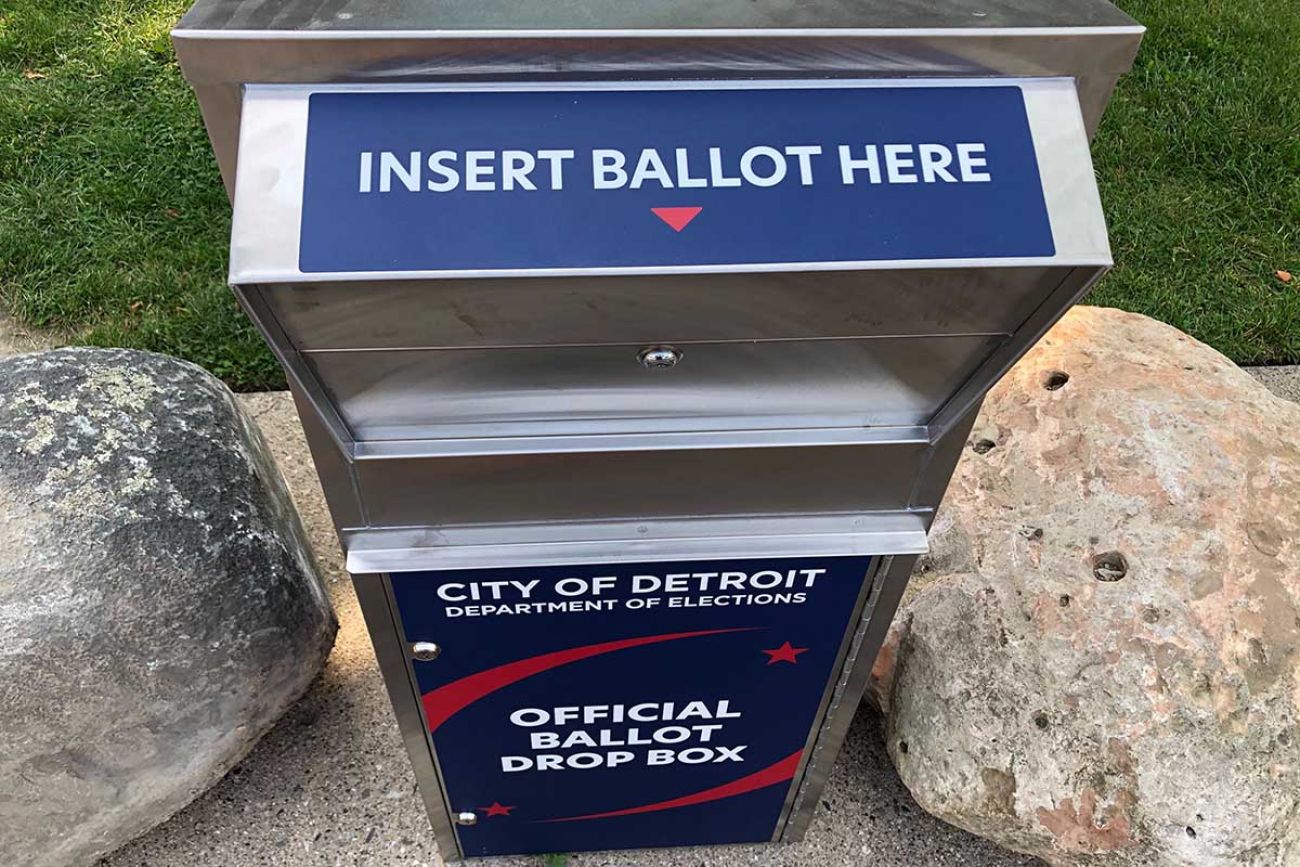 The language echoed that of President Donald Trump, who in late August disparaged mail-in voting, alleging without evidence that it leads to widespread vote fraud.

He’s tweeted doubts about drop-off boxes as well, calling them “a voter security disaster” and claiming without proof that they make it possible to vote “multiple times.”

A federal judge has paused the Trump campaign’s lawsuit against Pennsylvania election officials intended to stop their use of the drop boxes, pending a possible review in state court.

In Michigan, lawmakers recently passed a bill that required ballot boxes installed after last week to have security features including video monitors.

Ballot drop boxes have been added so quickly in Michigan that Secretary of State Jocelyn Benson’s staff had to remove a location list on a state website because it was becoming outdated almost daily.

There were about 700 boxes statewide before the August primary.

“We’ll have well over 1,000 for this election,” Benson, a Democrat, recently told Bridge.

Voters can log on to michigan.gov/vote to sign up for an absentee ballot or to find the location of nearby ballot drop-off boxes.

Alternatively, voters can call their local clerk’s office to find out if a drop box is available.

Pontiac was among the cities listed on the secretary of state’s website as having no drop box in early August. Shortly before the primary, the city installed one box inside city hall and has seven more on order, said Pontiac City Clerk Garland Doyle.

The price for the boxes, including security cameras, will be about $15,000. Doyle said. The cost will be paid from a $405,560 grant Pontiac received from the Chicago-based Center for Tech and Civic Life.

In Sherman Township in Isabella County, a box is located “right outside my office door,” said Clerk Denise Livermore, whose community favored President Trump in 2016.

“I did it this year initially because of COVID because it eliminated the in-person drop off,” she told Bridge. “The state has encouraged us to have the boxes, too.”

No voter, she said, will now have to travel far across the city’s 37 square miles to drop off an absentee ballot.

The city of 133,000 residents favored Democrat Barack Obama twice, then went big for Trump in 2016 before giving the edge to Democrat Gretchen Whitmer in her successful 2018 campaign for governor.

Ryska, a former assistant clerk in Wayne County, has been the Sterling Heights City Clerk since July 2017. She said she realized in May that demand for absentee ballots would be extreme  because of the pandemic.

“I also heard voters say they didn’t want to drop ballots in the mail because they didn’t have a stamp. We were thinking about different ways to help and decided to install drop boxes,” she said.

In the August primary, 40 percent of all Sterling Heights voters used the ballot drop boxes, which are secured by a lock requiring two different keys. Ballots are picked up often, sometimes several times daily and more often as the election approaches. They are stored in a secure room to which only four people have access, she said.

Ryska said she has also taken steps to improve safety at the city’s 45 in-person voting precincts. All poll workers will get masks, hand sanitizers and the option to wear a face shield over their masks. For voters who arrive unmasked, masks will be offered but poll workers won’t engage in debates if voters say no, she said.