Saginaw’s share of federal stimulus money is larger than the mid-Michigan city’s annual general fund. Like other municipalities, Saginaw has many needs and its elected officials are weighing how best to spend the money. (ehrlif / Shutterstock.com image)
August 5, 2021
Sergio Martínez-Beltrán
Michigan Government
Michigan's spending, Coronavirus Michigan

LANSING — Michigan’s long-suffering municipalities are set to get a massive injection of federal money, prompting tough decisions of how best to prioritize funding when there are so many needs.

From infrastructure and blight to mental health services and parks, cities and counties have delayed investment for years, limiting their ability to “be thriving places,” according to a report from the Michigan Municipal League.

Now that cities and counties set to receive $4.37 billion from the federal government as part of the American Rescue Plan Act, experts say municipal leaders should take an important first step before making decisions:

“It’s a huge responsibility for us and we take that very seriously,” said Vicki Wolber, the deputy county executive of Macomb County.

“We want to take our time and make sure we can make the best decisions that will serve our population for a long period of time.”

The county is among those local governments— including Flint, Saginaw and Detroit — that are embarking on listening tours and community forums to decide how best to spend the money.

The money is huge: Macomb County is expected to receive $169 million — an amount equal to 61 percent of its general fund budget, while Saginaw’s $52 million eclipses the mid-Michigan city’s budget for an entire year.

In Macomb, Wolber told Bridge Michigan that officials are considering a new building for the Department of Health and Community Services, and a new central intake facility for the county jail.

The talks are ongoing as community leaders wait for money that has been described as a once-in-a-generation windfall to Michigan communities, which altogether have lost more than $7.5 billion in state revenue sharing money from 2002 to 2017, according to a Michigan Municipal League report.

Overall, all 83 counties are set to receive $1.93 billion, while 49 metropolitan cities and townships in the state have been allocated $1.80 billion. Local governments of 50,000 people or less will be able to benefit from an allocation of $644 million.

The cities are bracing for the money as Michigan public schools decide how to spend an even bigger pot — more than $6 billion from three federal COVID packages.  School leaders are facing some of the same kid-in-a-candy-store moments as municipalities, trying to figure out how to best spend an amount of new money they’ll likely never see again. Funding projects range from additional staff to new heating and cooling systems, and many schools, like municipalities, plan to take their time to figure out what to do.

While the federal government attached few strings to the money, municipal governments have to allocate it by 2024 and spend it by 2026.

“We think that the American Rescue Plan Act is a historical investment in us, and should be looked at as a downpayment on our future,” said Rachel Richards, the fiscal policy director of the Michigan League for Public Policy.

She said local governments’ top priority should be to listen to their constituents.

“Your people know the needs of their communities the best,” said Rachel Richards, “They are often the ones that are on the ground every day, seeing where there are holes in state and local government services that need to be filled.”

That means cities can get creative — and cause controversy.

Last month, the Shiawassee County Board of Commissioners voted to use the funds to give themselves and top officials hazard pay. The payouts ranged from $25,0000 to $5,000.

After public pushback, the commissioners said they’d return the money.

Most cities and counties, however, likely will spend the money on different projects and programs to fight crime, build facilities, and address poverty.

Kent County Board of Commissioners is likely to use the $128 million awarded for enhancing the county’s behavioral health system, addressing lead and PFAS contamination, and boosting law enforcement officers, a spokesperson for the county told Bridge Michigan.

Meanwhile, the City of Detroit was awarded a total of $826 million, and has already received the first payment of $413 million.

According to a plan put out by Mayor Mike Duggan and approved by the Detroit City Council in June, the city will use the money for blight remediation, city services and infrastructure, neighborhood investments, and to address intergenerational poverty, public safety and the digital divide.

“We held 63 community meetings with more than 3,300 residents participating,” Duggan said in a statement. “Our citizens’ input and ideas resulted in (a) much more complete plan.”

Neighborhood investment was sought by the Detroit People’s Platform, an organization that fights to “protect, maintain and empower majority Black Detroit” such as recreation centers, parks, libraries and broadband.

“There's a lot of people that've been left behind before the pandemic, and we're asking for … a demonstrated commitment to racial equity and inclusion in prioritizing the needs of investments,” said Renard Monczunski, the transit justice organizer with the group.

“And specifically we believe in prioritizing investment in neighborhoods left behind by revitalization strategies … and neighborhoods that experienced higher rates of COVID.”

The money comes after municipalities and the state government delayed investments for decades, following economic downturns since 2000. One report claims Michigan needs $4 billion more per year in infrastructure improvements, while a report from the Michigan Municipal League found the state’s police force deployments fell 23 percent from 2002 to 2017.

But the pandemic exposed and exacerbated other needs as well, including the state’s $3.6 billion mental-health system and chronic shortage of affordable housing.

Aisha Morrell-Ferguson, the chief development officer at the Detroit-based COTS, a nonprofit that focuses on solutions to poverty and homelessness, said displacement fears were heightened when a national moratorium on eviction expired over the weekend.

On Tuesday afternoon, the Centers for Disease Control and Prevention issued a new eviction moratorium that applies to those living in counties with “substantial and high levels of community transmission” of COVID-19.

The new moratorium expires on Oct. 3.

“There are enough funds out there, in my opinion, to prevent evictions where preventable,” Morrell-Ferguson said. “Our landlords and our property owners should not be at a loss, and our residents should not be without housing.”

Chris Hackbarth, the director of state and federal affairs at the Michigan Municipal League, told Bridge Michigan local governments should partner with counties to stretch dollars and solutions.

“That's been our main message: take your time, make sure you talk with your community, talk with your residents, see what partnership opportunities there are with your businesses and your nonprofits in your county, and wait to see what the state has available,” Hackbarth said. “You might be able to do a project that you never thought you could because of the funding that’s available.” 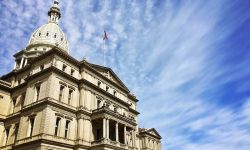 Michigan Republicans to Whitmer: We dare you to veto income tax cuts 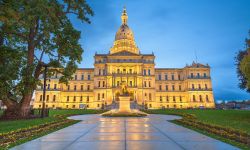