LANSING—Former Senate Leader Arlan Meekhof helped create the law that guides Michigan’s burgeoning medical marijuana industry. Within weeks of leaving office, he was consulting for businesses that wanted a piece of it.

In one pointed email, obtained under the state’s Freedom of Information Act, Meekhof described actions he took on behalf of three businesses he worked for that may have violated the law he helped write.

In a Feb. 21 email shared with state officials, Meekhof said he had spoken to Rick Johnson, chairman of the medical marijuana licensing board, and that Johnson was going to tell another state official to place the three businesses on the board’s March agenda. The board was in charge of deciding whether medical marijuana businesses qualified to operate in the state under the 2016 law.

Such a conversation, if it took place, could represent a violation of the 2016 law, which forbids representatives of applicants from having outside communication with licensing board members. As it happens, it was Meekhof, in his role as Republican Senate Leader, who recommended Johnson be appointed to the marijuana board in May 2017.

The behind-the-scenes communications raise questions about Meekhof’s handling of marijuana legislation while he was in office (he left the Senate because of term limits at the end of 2018) and Michigan’s lax ethics laws. Michigan has been rated last among U.S. states for government transparency and departing lawmakers have faced criticism for the ease with which they’re allowed to exit office and then represent individuals or businesses they once helped regulate.

Contacted about his email, Meekhof said he didn’t recall speaking to Johnson about getting applicants on a specific meeting’s agenda. Johnson, as well, denied having spoken with Meekhof about specific applicants for licenses.

But the email certainly gained the attention of state attorneys.

Meekhof sent the email to Aaron Geyer, an attorney for the three marijuana companies, and copied several state employees. In it, Meekhof wrote that he spoke to Johnson and Johnson “will communicate with Andrew Brisbow [sic] to place Power Play Sports, Lapeer Infused, and Chesaning Elite (Meekhof’s clients) on the board’s agenda for 3-21-19.” “Brisbow” is a reference to Andrew Brisbo, then-director of the state’s medical marijuana regulation bureau.

The 2016 marijuana law banned members of the licensing board and representatives of applicants for licenses from having outside, nonofficial communications. If the board chair received a so-called “ex-parte communication,” he was to report it to the governor’s office for “appropriate action,” the law said.

Rick Thompson, a marijuana activist who’s watched Michigan’s licensing process closely, said the public’s perception about whether the board was fair in handing out licenses for the new industry is important. The public should be entitled to a “full inquiry” regarding board members’ actions, he said when asked about the Meekhof email.

“I am extremely concerned about accusations of bias in the licensing process, especially considering the logjam of applicants that have been waiting their opportunity,” Thompson said.

Meekhof said in the interview he disagreed with the idea that people should be concerned he’s done consulting work on behalf of medical marijuana businesses seeking licenses under a system he, as a lawmaker, assisted in establishing.

“Helping people through the morass of government is what we do,” Meekhof said of the political consulting office he opened in January. “That’s pretty normal course of business.”

“Below is the email exchange we discussed,” Booth said in a Feb. 25 email to Brisbo. “Let us know if there is anything you would like for us to do.” 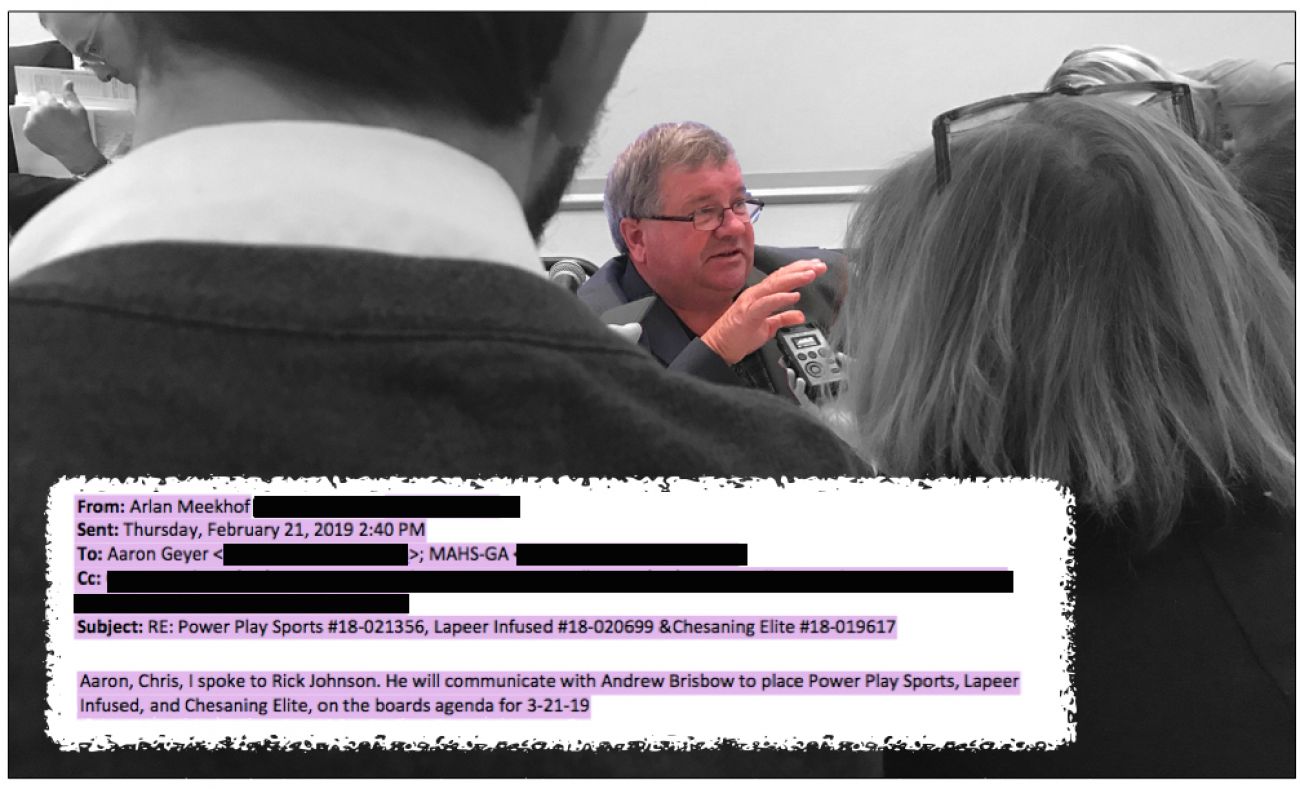 Dan Olsen, a spokesperson for the attorney general’s office, said Booth was simply “calling attention to the communication.”

Brisbo then forwarded the Meekhof email to Adam Sandoval, deputy director of the Department of Licensing and Regulatory Affairs, the department that housed the medical marijuana licensing board. Brisbo’s email to Sandoval listed the portion of state law that bans outside communications by board members with applicants. Brisbo and Sandoval scheduled a phone call on the matter. That was also on Monday, Feb. 25.

A few days after Sandoval and Brisbo’s scheduled call, Gov. Gretchen Whitmer issued an order on March 1 that did away with the licensing board altogether and announced that a new state agency would take over licensing responsibilities.

Robert Leddy, a spokesperson for Whitmer’s office, didn’t respond directly to a question on whether Whitmer was aware of Meekhof’s email when she announced she planned to get rid of the licensing board.

“Gov. Whitmer decided to establish the Marijuana Regulatory Agency within LARA to implement a fair and effective regulatory structure after voters embraced legalization in the last election,” Leddy said in a statement.

The three applicants Meekhof worked on behalf of were Chesaning Elite, Lapeer Infused and Power Play Sports 2. Two of the three were seeking licenses to be dispensaries. One, Lapeer Infused, was seeking pre-qualification, the first step in the licensing process.

According to state business filings, Joseph Aiello is president of all of three. Attorneys from the Warren-based firm Aiello & Associates had been representing the three applicants, according to emails.

The Michigan Campaign Finance Network (MCFN) repeatedly reached out to Aiello & Associates for comment. Eventually, a person who described himself as an attorney called from the law firm’s office number and said Meekhof was hired to help the applicants get on the licensing board’s agenda for the March 2019 meeting.

But when contacted by the Michigan Campaign Finance Network two days later to confirm other details regarding Meekhof, the attorney responded in an email, “Sorry, I’ve never met you, have no idea who you are and cannot help you.” Additional follow-up questions were not answered.

The now-defunct licensing board originally rejected Power Play Sports 2, Lapeer Infused and Chesaning Elite in September 2018 because of concerns over their applications. The three took their case before an administrative law judge who recommended they receive licenses. It was following that recommendation that Meekhof sent his email about getting the companies on the March 2019 agenda.

When asked about his work for the companies, Meekhof said he wasn’t supposed to help get the businesses on the agenda for a particular meeting but was consulting for them to help guide them through the process.

While the companies didn’t get on the March 2019 agenda, they did get on the board’s April 2019 agenda. Two of the applicants — Power Play Sports 2 and Lapeer Infused —  were approved. One, Chesaning Elite, was tabled because it was involved in a sale.

Asked how many medical marijuana businesses he has consulted for, Meekhof said he has in the past and probably will in the future.

“I do some consulting work for people in that space,” he said.

Meekhof has his own consulting firm called ARM Consulting Services. According to state business records, it formed on Jan. 14, 2019 — two weeks after he left office because of term limits.

In 2018’s lame duck session — the period from the November election until the end of the term — Meekhof also proposed banning home-grows of recreational marijuana, which were allowed under the ballot proposal that was approved by voters in November 2018. Without home grows, more revenue would flow through brick-and-mortar businesses. His bill, which would have required super majorities to pass, didn’t gain the support of the Senate or the House.

In a May 2018 email to Johnson, Brisbo listed Meekhof’s Senate office as being among those that had complained about the board’s slow pace of approving medical marijuana license applications.

“As I’m sure you and the other board members are aware, we do hear many concerns about the pace of the process, including from Sen. Meekhoff’s office,” Brisbo wrote.

Multiple individuals, including Thompson, the marijuana activist, who’ve watched the debate over marijuana policies unfold in Lansing for years said they weren’t surprised Meekhof had become a consultant whose clients have included those with interests in medical marijuana.

“We’ve seen a trend in Lansing of lawmakers working on the marijuana issue and then turning right around and going to work for the industry,” Thompson said.

In May, the market research firm Brightfield Group projected that recreational marijuana market in Michigan would hit $650 million by 2023, according to a report by The Detroit News.

Jamie Lowell, an activist and businessman who worked on the 2018 campaign to legalize recreational marijuana in Michigan, said the situation involving Meekhof pointed to one of his main concerns about the medical marijuana licensing board: conflicts of interest. Critics feared that a board member could quietly work to financially benefit applicants he or she was connected to by approving certain licenses and rejecting others.

“The board should have been done differently, if there was going to be a board,” said Lowell, who added that he has faith in Brisbo's integrity. 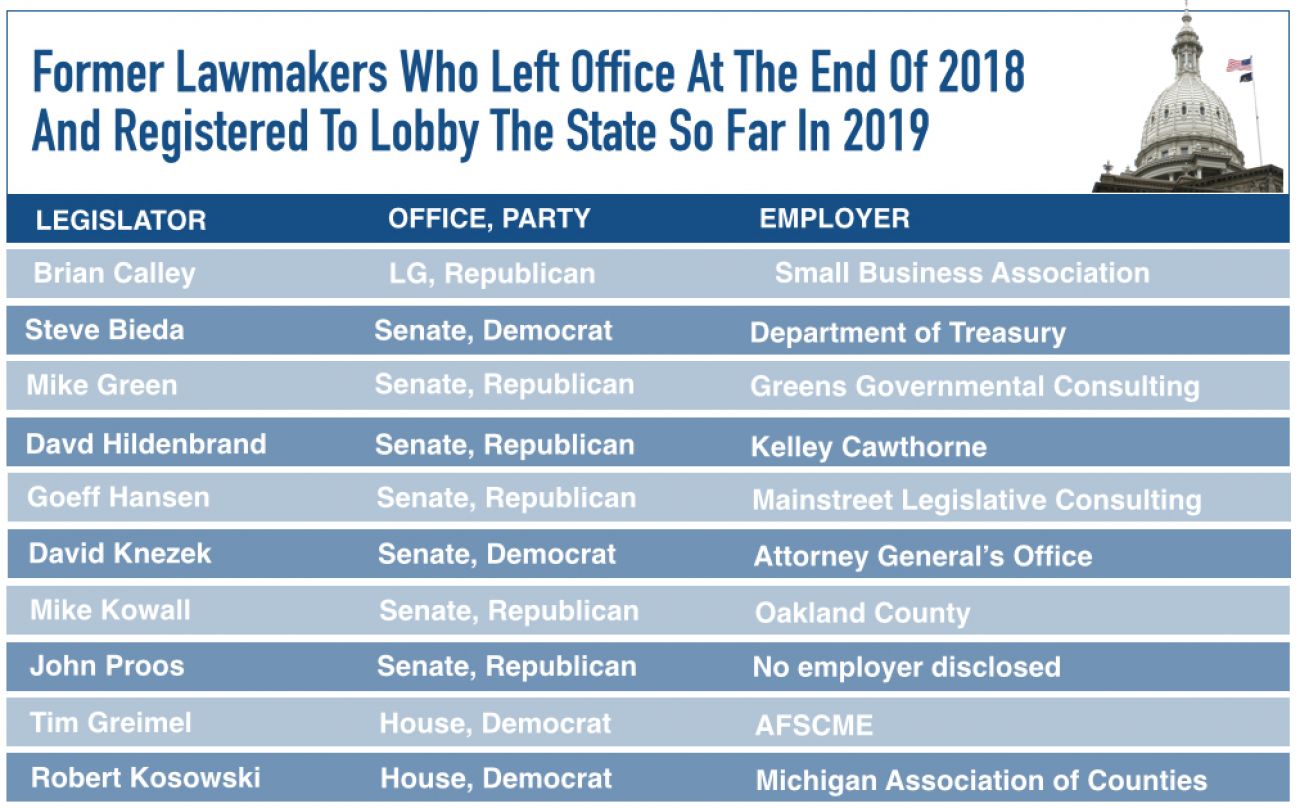 Meekhof is not registered to lobby in the state of Michigan. And it’s not clear his consulting work would require registration. If he’s simply advising clients and not speaking directly with high-ranking state officeholders about specific policies, he may not have to register at all.

If individuals work to sway certain “lobby-able public officials” in Michigan, they may have to register. Members of the medical marijuana licensing board were not included on the state’s list of “lobby-able public officials”; under the medical marijuana law, those board members weren’t going to have outside communications at all.

Unlike many states, Michigan has no required cooling-off period before a former state lawmaker can begin lobbying state departments or lobbying the lawmakers he or she previously served with. Over the first five months of 2019, 10 former lawmakers who left state office at the end of 2018 registered as lobbyists in Michigan, according to disclosures. Others, including Meekhof, are working as consultants.